TrackTown, USA:  The races started a little later today. Dave went in to his usual morning run-through with the TrackTown USA staff and I drove to the airport to fetch Lisa and Leo (our daughter and grandson). They will be joining us for a few days. (Lenny and Lucy are remaining at home because taking a 23-month old to a track meet is not fun.)

Lisa had told Leo about the kiddie area at the Fan Fest, so first-thing after arriving, our little athlete signed up, received his "credential" and official race bib, then started his quest to complete the seven events. 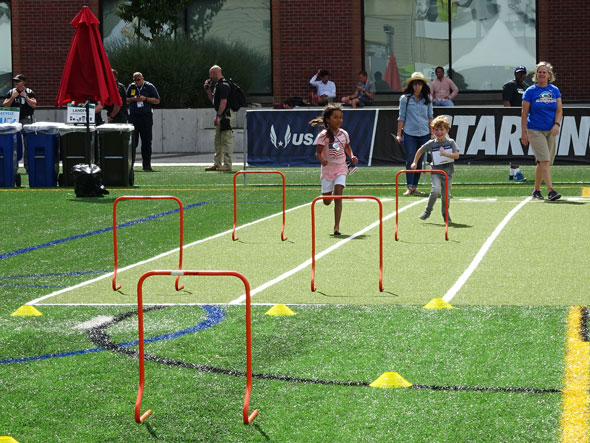 Leo may not be a hurdler 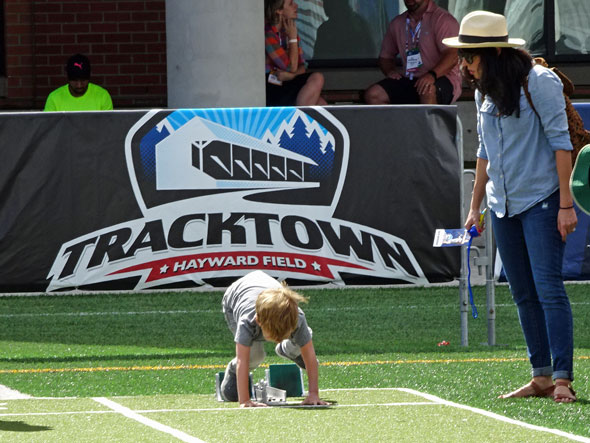 Lisa coached Leo about how to use starting blocks 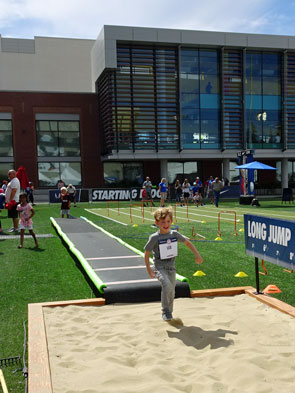 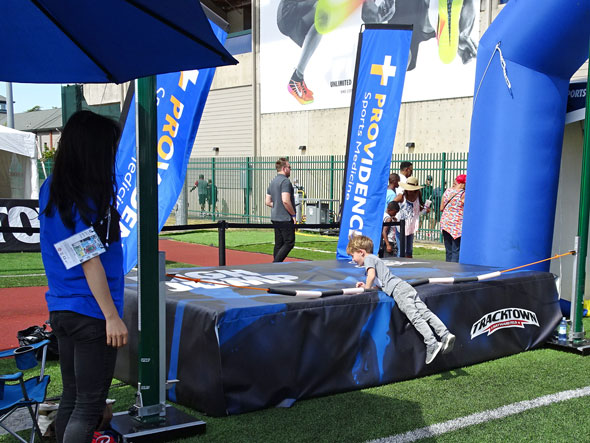 Leo may not be a high jumper

Leo is a very fast runner and he especially loved running and jumping into the long jump sand pit. Unfortunately (or possibly, fortunately), the competition is not open to kids under five years old. Ageism! Happily a four old has no idea there is a competition - Leo just loved going through all the events. He now only has the shot put and javelin remaining to complete his hep.

By the way... I came up with a brilliant idea for a team decathlon meet/event. Each country sends their best athletes in the ten decathlon disciplines (100m long jump, shot put, high jump, 400m 110m hurdles, discus, pole vault, javelin and 1500m) and tally the scores. The same scenario will occur at the same meet for women in the heptathlon. Can you imagine how high the scores would be? Famed decathlon guru, Frank Zarnowski, would have to expand the scoring tables! Someone (NOT DT!!!) needs to organize this event or maybe make it part of the World Championships by simply scoring the best times from each country? Like a side-game. Could we place bets on this event? Select fantasy teams? Remember, you heard it here first. (Unless someone somewhere somehow already does this. In that case, pretend you never read this.) 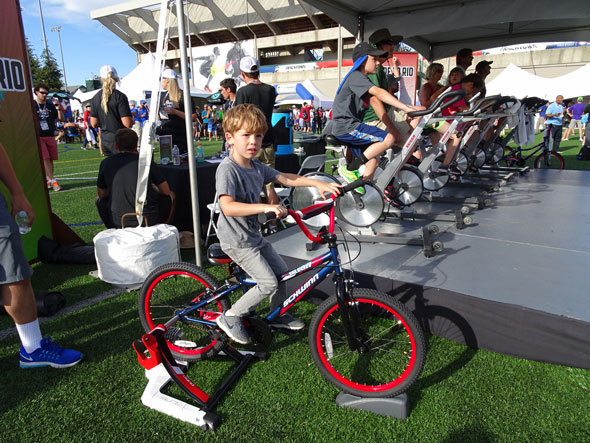 Thanks to the massive contribution from our grandson, the Ride to Rio cyclers are already through Mexico and nearly through Central America.

There was another very exciting moment at Historic Hayward Field this afternoon when two more Oregon Duck alums made the Olympic team in the men's javelin throw. Cyrus Hostetler (who interned for a while in the TrackTown USA office) is going to Rio. Hostetler threw 273+feet/83.24 meters to make his second Olympic Team. Cyrus will be joined in Rio by ex-Duck Sam Crouser. ASICS athlete, Sean Furey, rounds-out the team. As if Cyrus and Sam making the team wasn't enough excitement - DT was asked to present the medals to the three victors. On the 4th of July! 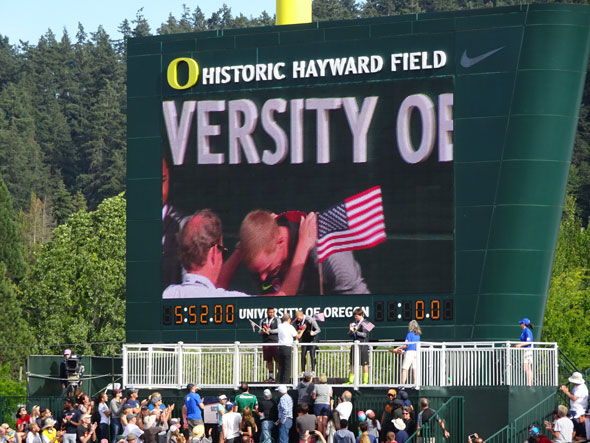 All my favorites made it out of the men's 5000m semi-final to compete in the final race Saturday, including 41-year-old Bernard Lagat, Hassan Mead, Duck alums Eric Jenkins and Galen Rupp, and Lopez Lomong. (If you want to learn of Lamong's frightening and horrid childhood in Africa, read his book, Running for My Life: One Lost Boy's Journey from the Killing Fields of Sudan to the Olympic Games. Spoiler Alert: the first chapter will rip-out your heart, unsettle your soul and make your blood boil... but it has a very happy ending.

Sam Kendricks broke the US Trials record by pole vaulting 19 feet, 4¾ inches to make the team, followed by Cale Simmons (US Air Force) and Logan Cunningham.

The last two events of the day were 800m finals. Clayton Murphy, Boris Berian and Charles Jock are going to Rio. There was quite a bit of controversy in the women's race. America's best half-miler, Alysia Montano fell down on the last curve, caught-up in a tripping mess with another fantastic half-miler, Brenda Martinez. Martinez (who will still compete in the 1500m) and Montano finished 7th and 8th place. Or last and next-to-last. Ouch and Oh No at the same time:

Your browser does not support iframes.

We watched most of the races from our seats, but took Lisa and Leo up to the hospitality tent so they could get some lunch. Leo had been to Historic Hayward Field less than one hour and already had the lay of the land. Many of our friends welcomed Leo and Lisa to the Olympic Trials. 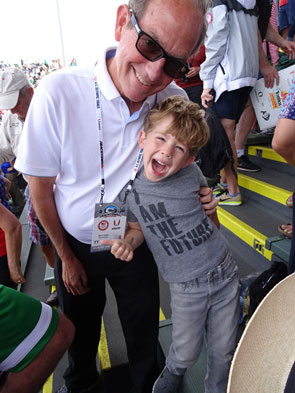 Leo was having a great time in Eugene

After the meet finished, we all went out to the Fan Festival area to meet-up with more friends and watch the last award ceremonies. 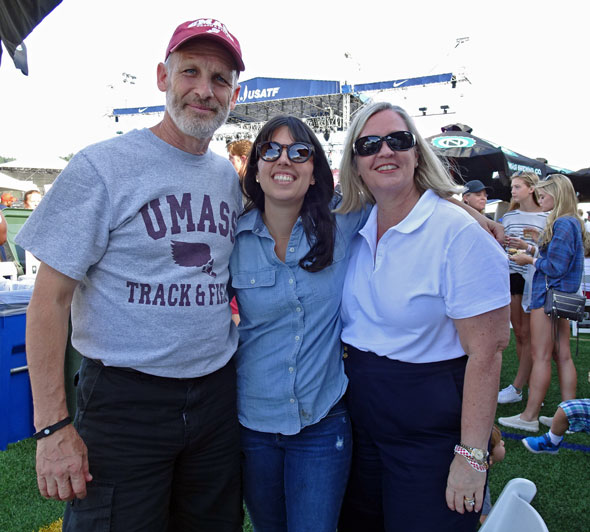 Michael worked with DT when we lived in Manila (Philippines), and was our first visitor to the maternity ward when Lisa was born... so it is safe to say Michael has known Lisa her entire life!

There was quite a very long delay in the awards ceremony for the women's 800 medals. It is common for a coach to file an official protest when there is a fall in a race, and Ms. Montano's coach filed. Meet officials, especially trained/designated to this task, review the race tapes and interview anyone if necessary. Their decision is final. In this case, the officials decided no one was at fault and Alysia Montano will not be representing her country in the 2016 Olympic Games. Heart breaking, but once again proving why the US team is the hardest team to make.

While we waited, a live band was playing and Leo started dancing in front of the stage. He was awesome. 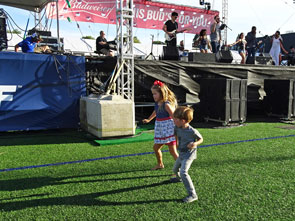 Our friend, Rob Vermillion (DT's assistant during the 2008 Olympic Trials), was the on-stage announcer this evening and finally introduced Kate Grace, Ajee Wilson and Chrishuna Williams as the US 800m Team for Rio. 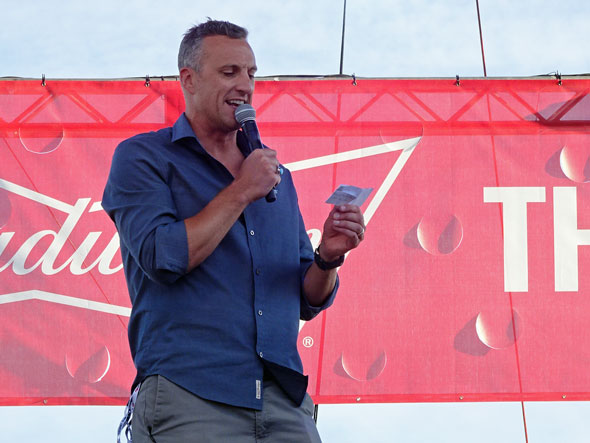 A face made for television - Rob Vermillion 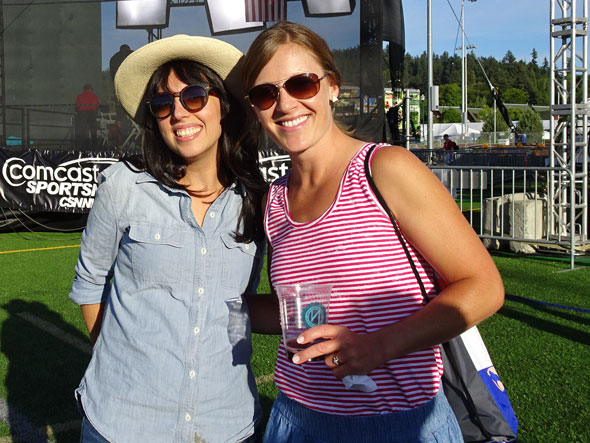 We finally dragged Leo back to our motorhome, fed him, and Leo (and his Bubba) lit sparklers for the first time. 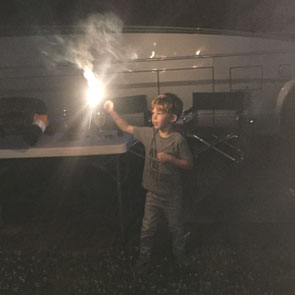 Until my next update, I remain, your 4th of July correspondent.

FYI: Tomorrow (Tuesday, 5 July) is a rest day. No races. No events. No blog post. I am taking the day off. See you Thursday!