TrackTown, USA:  There were no events scheduled for yesterday. No races. The Fan Festival was closed. We spent the morning with Leo and Lisa - going to brunch at Marché and visiting one of the best toy stores in America, The Elephant Trunk. (Lisa's comment: I live in Los Angeles, yet come to Eugene to visit a toy store?) Both establishments are in the 5th Street Public Market shopping and dining complex downtown Eugene. 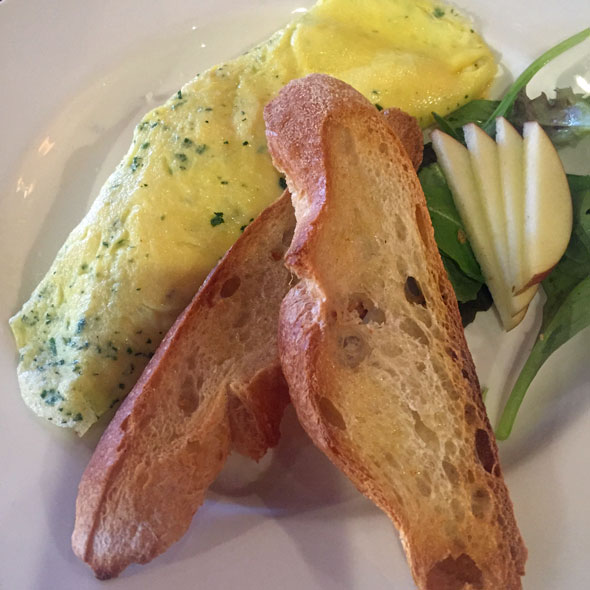 After our morning at the public market, Lisa and Leo loaded up a cooler filled with drinks and snacks and headed out (in my Jeep) into the Willamette Valley wilderness to go on a two-night mother-son "glamping" trip... i.e. glamorous camping... in a fancy teepee-filled resort. The "campsite" is complete with breakfast each morning and is situated next to a babbling brook. Leo jumped, first-thing, into the creek (clothes and all) and is going full-on country-boy-mode for the next few days.

With no meetings to attend, no grandson to play with, and no track meet to attend, My Driver took me to dinner to Bepe & Gianni's. I promptly carbo-loaded with pasta in preparation for the Hammer Throw competition Wednesday. 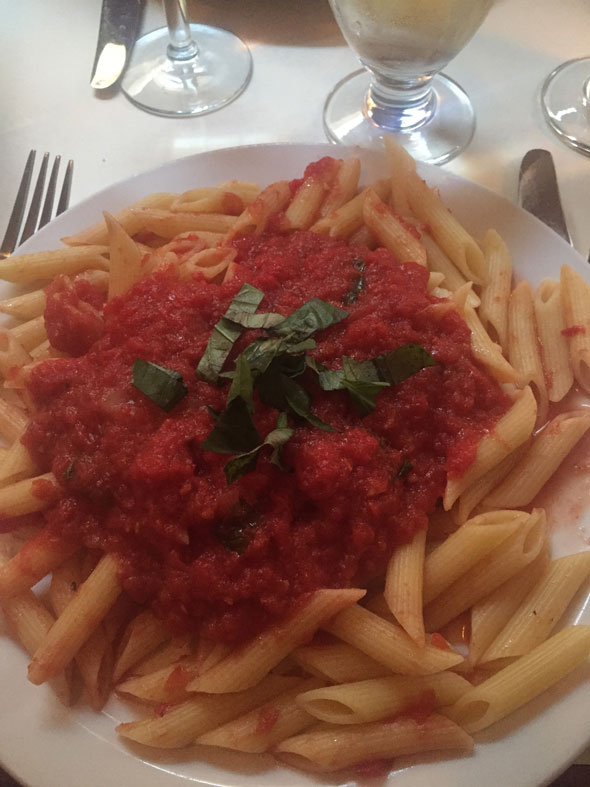 This morning we were both forgetful. Lisa had my car, so I drove DT to the track early this morning in his Tahoe and returned to spend a quiet few hours alone in the motorhome... but had to drive back to the track as Dave forgot his credential... and even the Chairman of the Board can't move around the facility without his credential. Even though everyone on the security force know him by name, rules is rules. When I drove into the track later this afternoon, I forgot to place the memory stick inside my camera (dang!), so every photo tonight was snapped with my phone. Apologizing in advance. This afternoon was another milestone at Historic Hayward Field. Hammer at Hayward. Because the hammer throw is such a dangerous event and because the hammer is thrown so far and because the hammer throw takes up a lot of space, the event is usually held at a venue outside of the track. At the University of Oregon, the hammer throw is held at a field adjacent to the track. If the hammer were to be thrown on the infield during a track meet, there is a very decent chance a long jumper, pole vaulter, official or runner could be seriously injured or killed. The hammer is a 16-pound ball of steel - shooting through the sky at amazing speeds. Basically a weapon. But what if there were no other events being held at the track? My Driver had the brilliant idea to hold the women's and men's hammer throw in the middle of Historic Hayward Field, the first time ever, as a stand-alone event. Free to the public. Six hours. Nothing but hammer. Hammer at Hayward. (Amazing graphic here.) It was a controversial idea. There was a lot of discussion, but the main theme behind the organizing committee is to Serve the Athlete. Hammer throwers need some love. Not a lot of fans venture over to the nearby field to watch the hammer throw. The University of Oregon is blessed to have Lance Deal on their staff. Deal won the Silver in the 1996 Olympic hammer throw and still holds the US record at 270 feet, 9 inches (82.57m). Lance Deal is the world-guru in hammer cage design. What is a hammer cage? This is a hammer cage: 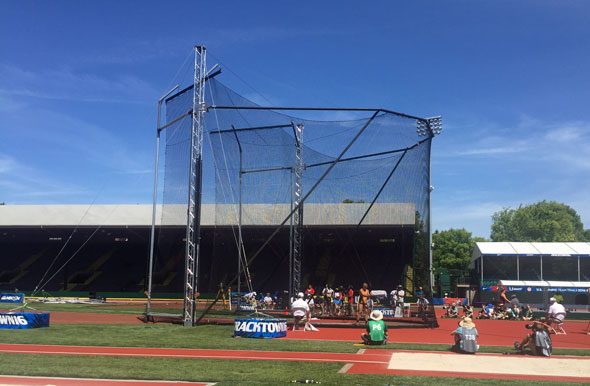 Actually, this is the best hammer cage in the entire world. The net controls the hammer so it does not go flying dangerously into the crowd. There is an opening at the front, allowing the flying ball's trajectory to only go forward. Today, there were a few strays (like foul balls in baseball), but only a few long jumpers would have been taken out.

The meet directors only had the largest grandstand open and it was completely filled with fans. 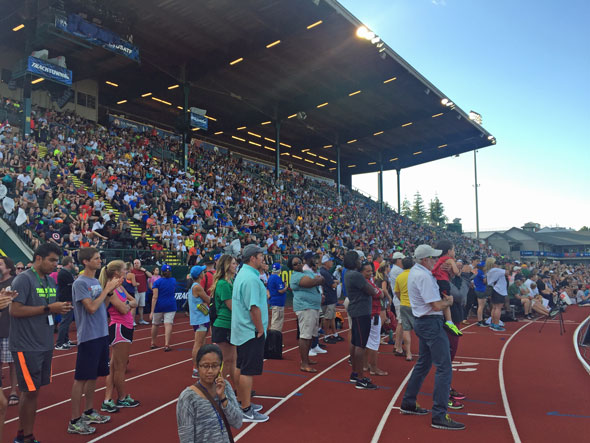 Track fans are a devoted breed. Imagine all these people coming out to watch the hammer throw! It was awesome and a great success. The athletes were very pleased. 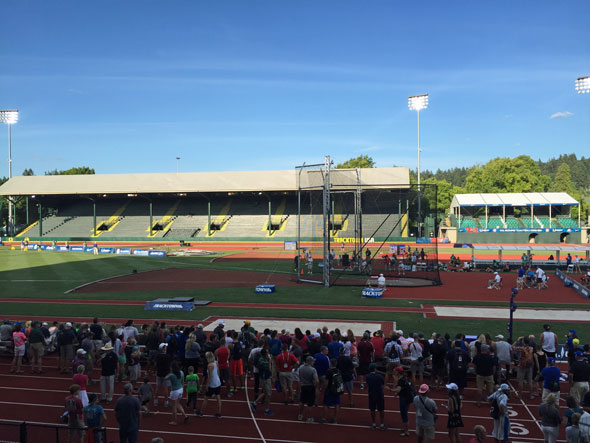 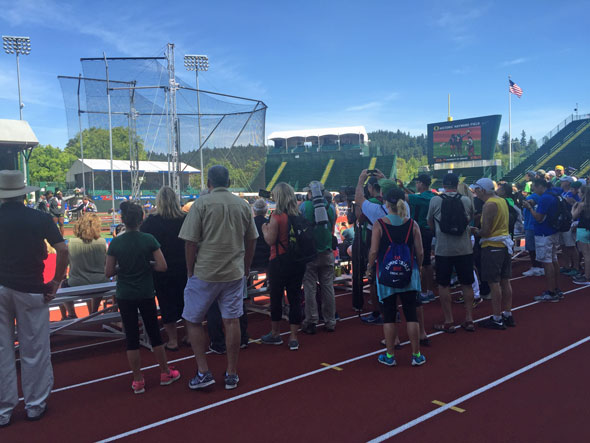 Up Close and Personal

The women threw first. The US is rich in female hammer thrower talent. Seriously. The first three placers today have all met the Olympic minimum standard to compete in Rio and all three will be going to the Olympics. 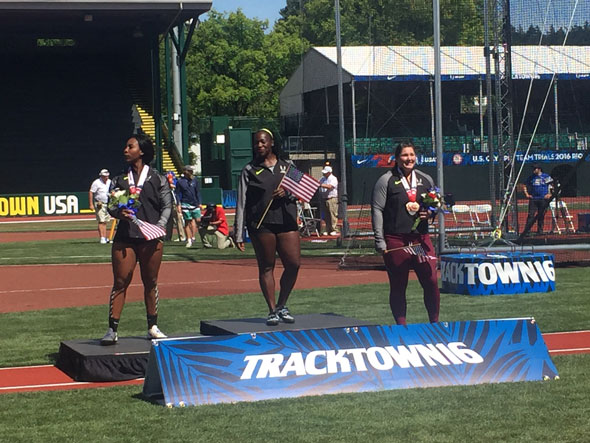 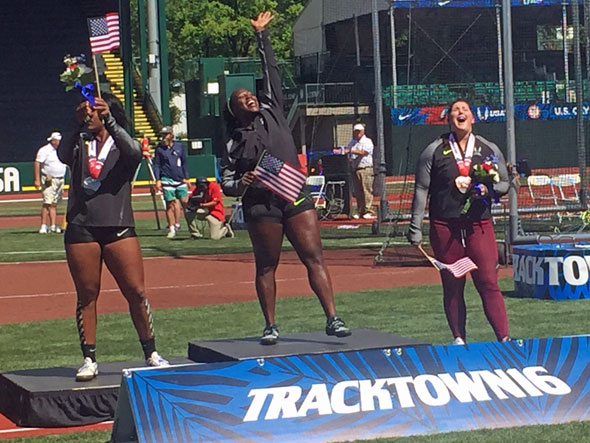 The men's competition was also very exciting. Only one competitor has reached the Olympic minimum standard to throw in Rio - Rudy Winkler. Winkler attends Cornell University and finished 2nd at the NCAA meet a few weeks ago. He threw a monster in the fourth round (251-10 feet/76.76m) to finish first! Rudy is packing his bags for a trip to the southern hemisphere. 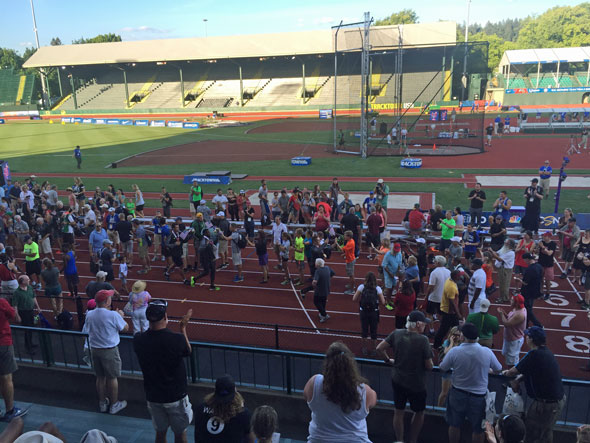 After the award ceremony, the medalists cruised down the track on their victory lap, getting high-fives from the gathered fans. Truly a unique experience for the athletes and the fans. Another amazing day of The One True Sport at Historic Hayward Field.

Then the sun went to bed and so did we. 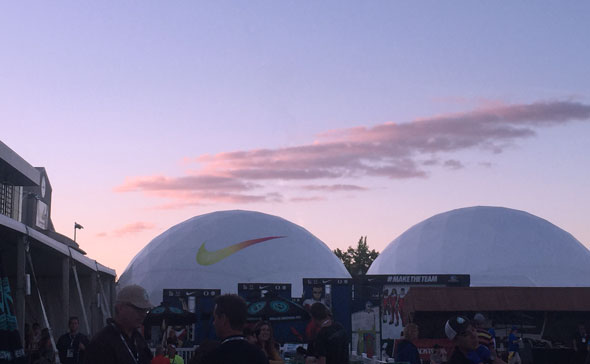 Until my next update, I remain, your hammered correspondent.