TrackTown, USA:  Dave was out the door long before I even woke this morning, yet I was still at the track by 9a - did not want to miss one moment of the second day of the decathlon. The WGA kept his lead in the decathlon all day. Ashton Eaton sailed through the 110m hurdles (one of his best events) and was the overall winner. Ashton is not the best discus thrower in the world, and really gave me a scare this morning by fouling on his first two (he only gets three!) attempts. He finished tenth overall in the discus, but climbed back up the point board with a second place in the pole vault. Eaton cleared 17 feet, 2¾ inches. He has jumped higher. Then the decathletes have a little rest before the final event - the 1500m run.

Which gave me a little break as well. I joined Dave on his daily "walk through" around the facility. He checks that things are just-so and chats with the vendors, volunteers, security, etc. Everyone knows him.

There are two events for the kids Heptathlon game that cannot be conducted inside the main Fan Festival area (due to safety concerns). The shot put and javelin are held in the concourse outside the stands. Instead of just tossing a shot put, balls (much lighter than regulation) are thrown into a bean-bag-toss situation. 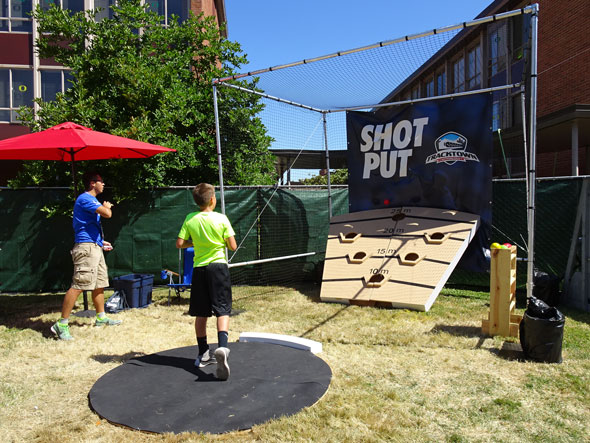 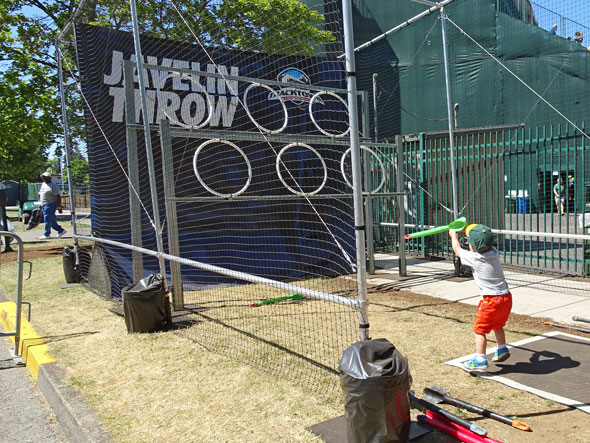 Instead of letting toddlers throw metal spears (nothing good could ever come of this), plastic practice javelin dart-type implements are thrown through rings. 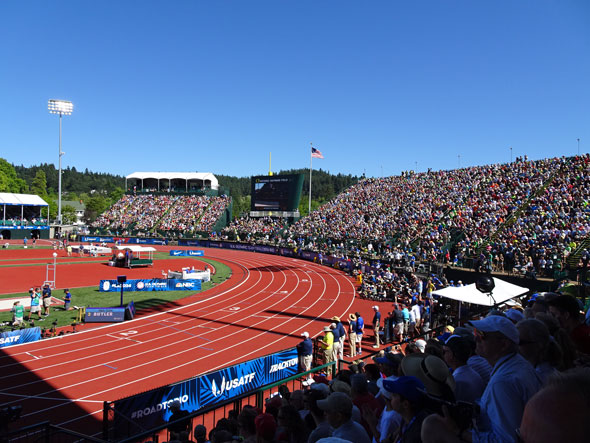 It was just a wonderful day for the Ducks. With six current-or-alum women in the 100m semi-finals, we knew there was a very good chance a few green and yellow women would be going to Rio. English Gardner, Jenna Prandini, Ariana Washington and Deajah Stevens made it into the final. Four Ducks in the final race, but only English Gardner made the US team. Gardner won the race in 10.74, followed by Tianna Bartoletta (who, in her spare time, made the long jump team!) and Tori Bowie. The US has so much talent in the sprints. I am so excited for these women in Rio and so hopeful for our relays as well. 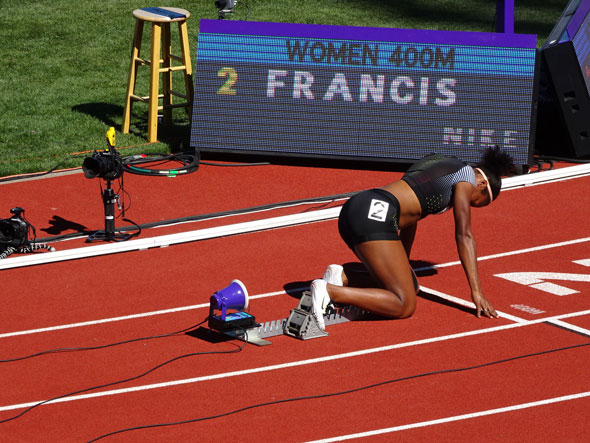 Another Duck alum, Phyllis Francis finished second in the 400m final behind America's Sweetheart, Allyson Felix. Natasha Hastings was third. Another amazing group of talent here, as well, and just more fuel for our relay pool.

And then there is one special Duck alum. The World's Greatest Athlete. Ashton Eaton. With a strong lead in overall scoring, Eaton just had to finish the 1500m in his usual amazing clip to take the gold. The 1500m is a long, hard, grueling mile after competing for two days. It is often painful to watch. Usually the announcer will contribute a nail-biting tidbit stating "if this guy beats that guy by 14 seconds, he will take third place" which results in the entire stadium peering at their watches and counting. Decathletes are a different beast. I have witnessed a decathlete, especially skilled at running, run along another to encourage him to run a little faster. These guys become a posse after spending two days together. 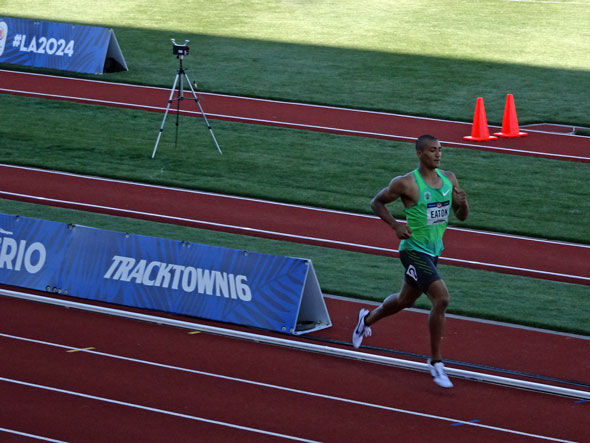 Ashton just cruised along, finishing in just under four-and-a-half minutes, in fourth place to win the decathlon with 8750 points. (Eaton currently holds the world record at 9045 points.) Joining Eaton in Rio will be Jeremy Taiwo (8425 points) and Zach Ziemek, University of Wisconsin, with 8413.

After the exhausted men finished the four laps, they collapsed on the track, hugging each other and talking with the press. They took a victory lap together and stopped for a little bath in the steeplechase water hazard! Here are more photos: 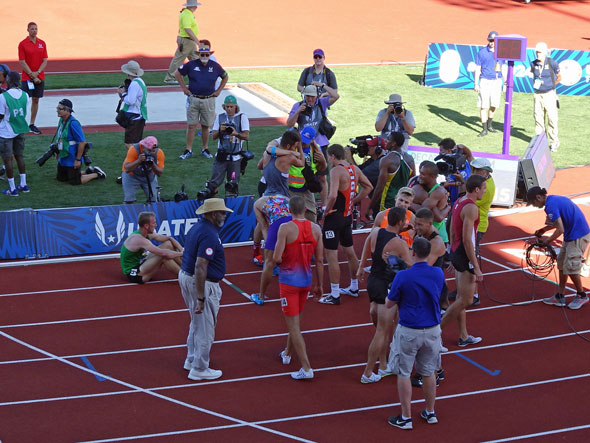 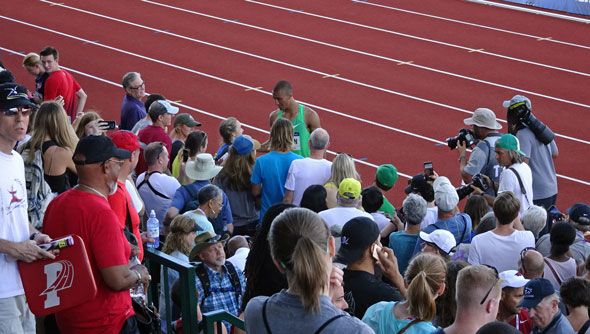 Ashton Eaton, signing autographs and posing with fans. He is ridiculously popular in Eugene. 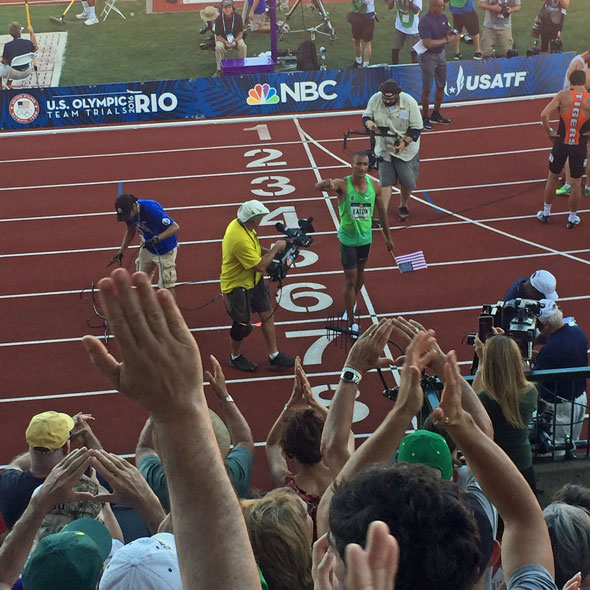 Eaton, giving props to his peeps 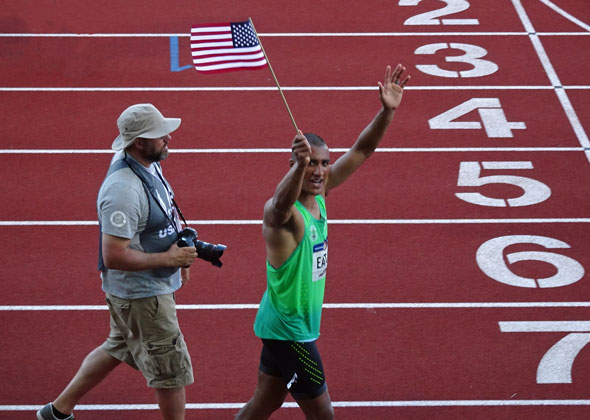 After the races, we gathered with our own posse in the Fan Festival to watch the sprinters and decathletes receive their medals. 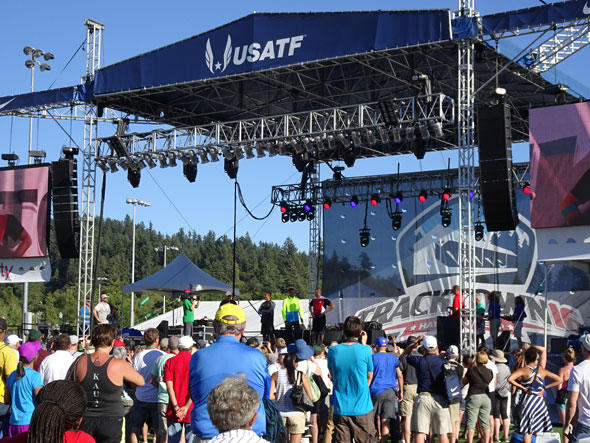 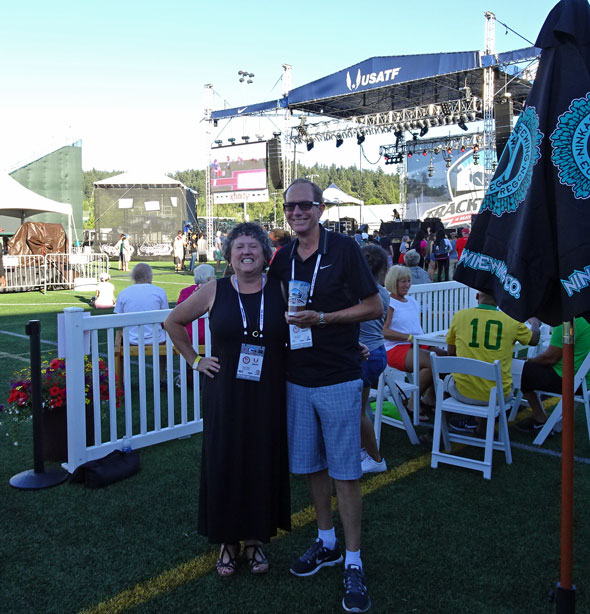 Until my next update, I remain, your very very very happy correspondent.