TrackTown, USA:  Lisa and I had a very lazy morning with Leo. Bubba was up and out of the motorhome very early for his usual morning shake-down meeting at the track. His family slept-in. Lisa and I took Leo to the Science Factory - a very small, but interesting, hands-on science museum for kids. Admission was only $4, and Leo found quite a bit to keep himself entertained for 90 minutes, including a few things Lisa and I had never seen before (and trust me, Lisa has been to her fair-share of science museums on several continents). A visitor can imprint their shadow with a phosphorescent wall and pick-up fractal ooze (looks like molasses) with a magnet. Good $4 investment and it is just behind Autzen Stadium in Eugene. Easy to find.

Before taking Lisa and Leo to the airport (I know, so sad, right?) Lisa decided she needed a Ruby (a nice ale with a hint of raspberry) from a McMenamin Pub, so obviously I had to indulge Our Only Child. We went to the North Bank Pub. I had incredible cod "fish and tots". Lisa had a salad and her Ruby. I was thinking it was the first time in several days I had sat down to eat a meal with a napkin on my lap, with an actual metal knife and fork. 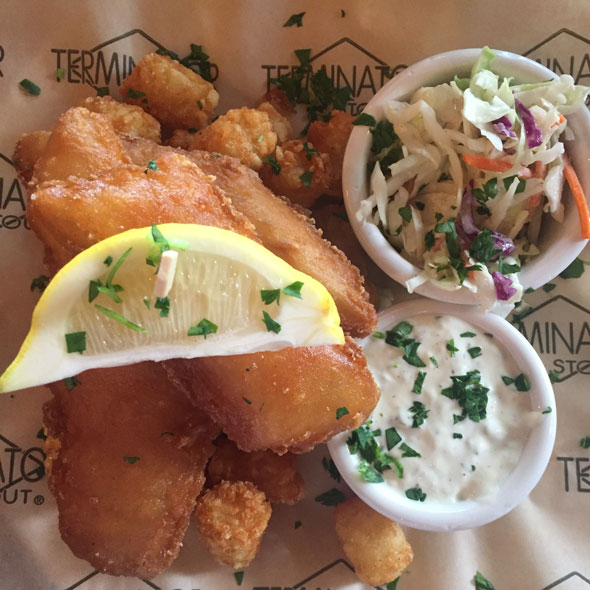 After lunch, we went back to the motorhome to meet Dave and we all went to the little Eugene airport so Lisa and Leo could catch their plane to Los Angeles. It seems they just arrived, yet Lisa and Leo have already landed back in Los Angeles, where I am going to assume a very happy Lucy and Lenny met them at LAX???

Dave and I went immediately to Historic Hayward Field where I accompanied Dave on his daily walk-through around the venue. He/we greeted guests, VIPs, security, fans, donors, vendors, volunteers and friends. (This is one of my favorite activities - following DT on his rounds!) Schmoozing and Cruising is good, but we were in our seats as the gun went off on the first event of the evening. 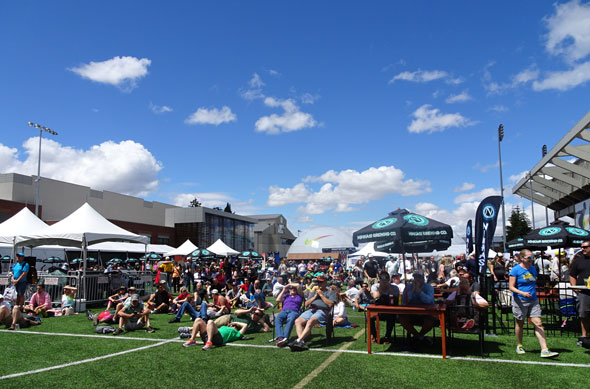 The Fan Festival was very popular this afternoon!

Oregon hurdle phenom (and apparently also a Duck football wide receiver), Devon Allen was racing in the 110m hurdle semi. Devon was lined-up against some of the best hurdlers in the world. (America is super talented in the 110m hurdles.) 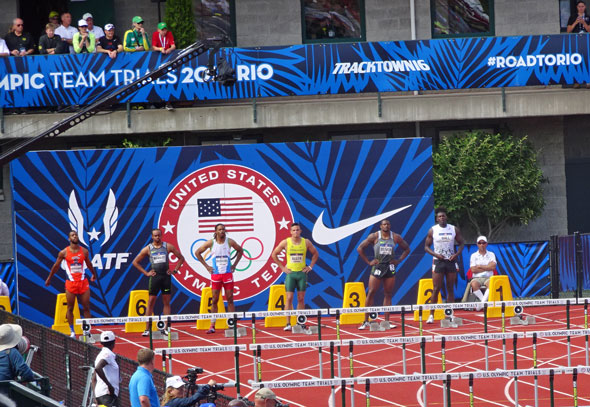 Duck Devon Allen (in yellow & green, lane 4) was up against hurdle royalty in his heat of the semi-final. David Oliver and Aries Merritt. Allen moved on to the final event, but David Oliver pulled-up at the finish of his semi and did not show up to the starting block at the final. Injured.

Later in the meet, Devon Allen won the 110m hurdle final. W O N. The crowd went crazy. Crazy as only Oregon football/track fans can go crazy. A few minutes before the race, Mary told me she hoped Devon would win. Win? No way. I just hope he makes the team against the international stars of US hurdlers. Dang if Mary did not make a fool out of me. Devon won easily. 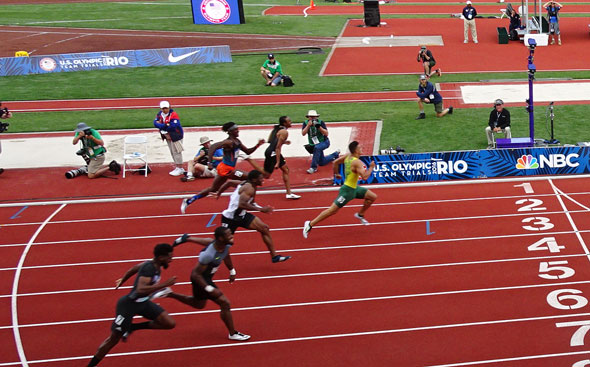 The Green and Yellow wide receiver made the elite eat his dust and booked himself a ticket to Rio. After winning the final, Allen jumped the fence surrounding the track (like he was hurdler or something?) to kiss his parents and family! Another amazing moment at Historic Hayward Field.

Speaking of incredible moments at Historic Hayward Field, the 5000m men's final was another race for the record books. 16 men started the race and it was the most boring and slow first mile anyone could ever remember. Then two racers took off and kept a lead for another mile and then - finally - the Big Boys decided it was time to race and it was all hands on deck. The last 3/4 mile was heart-stopping for fans. The lead changed too many times. A few shoe-in's (Galen Rupp??) dropped off and a 41-year-old veteran, Bernard Lagat, was first to cross the finish line, followed by (my personal favorite) Hassan Mead and US Army runner Paul Chelimo. I'm telling you, this was not what the knowledgeable crowd expected at all and they reacted with wild enthusiasm. What a night! 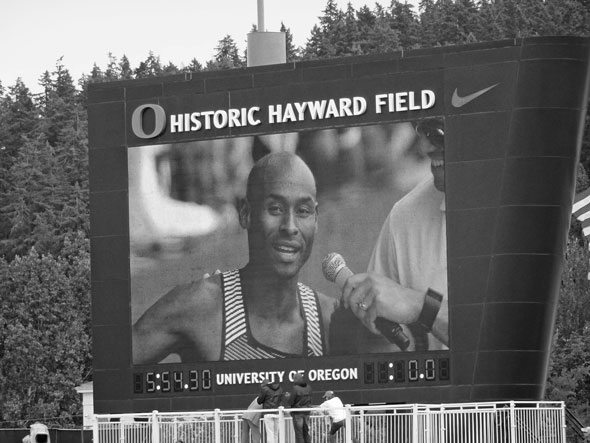 Interesting point: many event winners take their victory lap with their children in their arms. Most of their children are infants/toddlers. Bernard Lagat took his children onto the track for his victory lap. His oldest is probably in middle school. 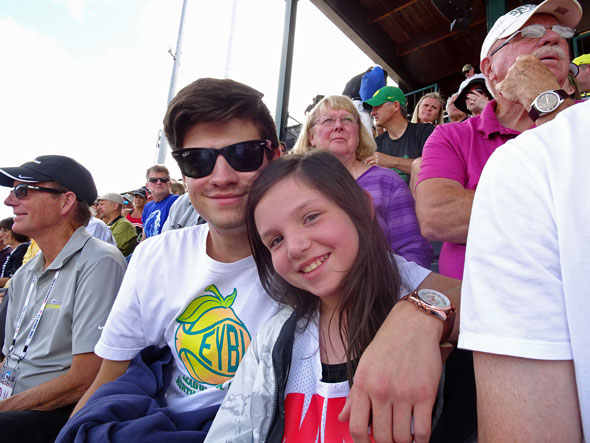 Friends joined us tonight: DT with Nic and (his sister) Sarah 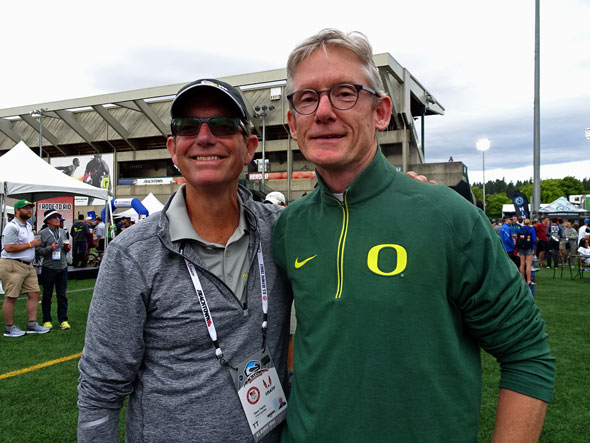 DT with Nic & Sarah's dad, Matt. We have know Matt a very, very, very long time. How long? When we moved out of our corporate housing in Taipei in 1988, Matt moved in. 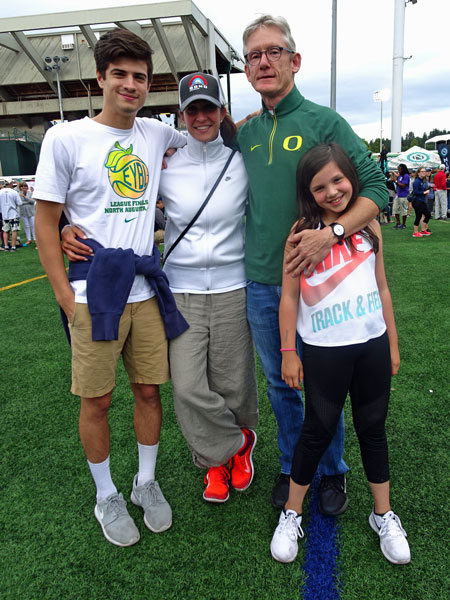 Matt with his family: Nic (going to college in the fall),
wife Marie, Matt and 5th grader Sarah.

Not that I'm prejudiced or anything.

Until my next update, I remain, your wide-receiving correspondent.