Indio, California:  The Motorcoach Country Club activity committee organized a Poker Run for this afternoon. (A Poker Run is a game, usually for charity, where players go to several different set locations to draw a card in order to form a winning poker hand, and it is common for players to move around on motorcycles, bicycles, vintage cars, horses, or other unusual methods of conveyance. Since we are in the Motorcoach Country Club, our players moved around the resort in boats. It was 91 degrees. 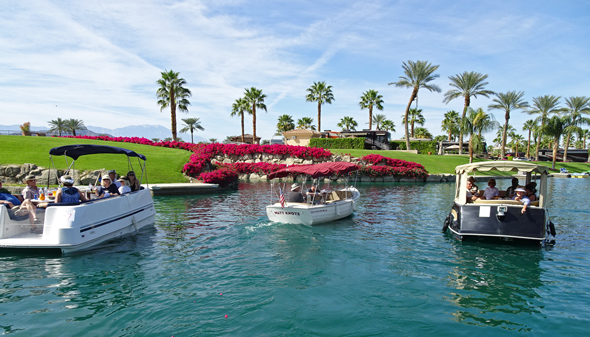 Nine (electric) boats cruised throughout the 2 mile water-way this afternoon, loaded down with players, seeking the seven locations to draw their lucky poker hand. Players buy a score chart and the cards they draw from the deck are noted on their chart. There are all sorts of complicated rules (which, honestly, I never really did understand) and at two stations participants were not allowed to draw a card unless they could correctly answer a trivia question.

Luckily, I did not have to understand rules or play the game or choose cards or answer trivia questions or even think. I volunteered to help at the card-selecting location on Colleen and Rick's boat dock. Rick was to secure the boats to the dock during the process. Colleen was in charge of the card drawing. My super-important job was to serve margaritas to the players before they departed. I was serious about my duty and arrived in costume: 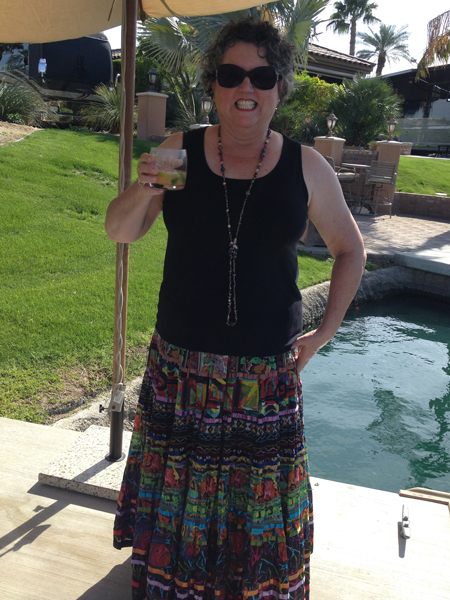 We played Jimmy Buffett tunes and I brought a few friends: 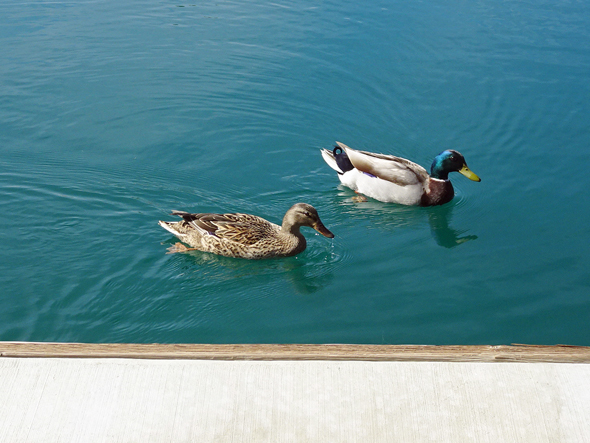 We waited and waited and waited for the first boat to appear. Rick tied it up. Colleen went through the drawing process. I poured the jug of pre-mixed Costco-brand margarita (provided by the entertainment committee) and ice into waiting cups. We were a great team and after the first group came through, were seasoned as sailors - ready! 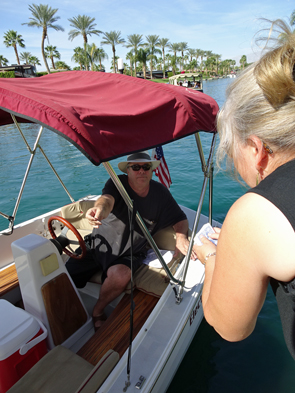 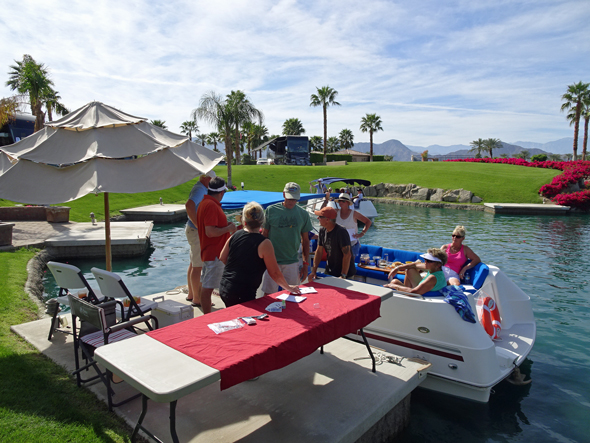 Sometimes we would have a lull between boats and other times there was a line at Colleen & Rick's dock. When it was time for us to take a break, I ran over to my (one-campsite-site over) kitchen and whipped-up three Paloma cocktails (muddled jalapeno slice and agave syrup, Patron Silver tequila, grapefruit juice, lime juice and a splash of soda) - generously saving the pre-made mix for the players. Such a martyr. 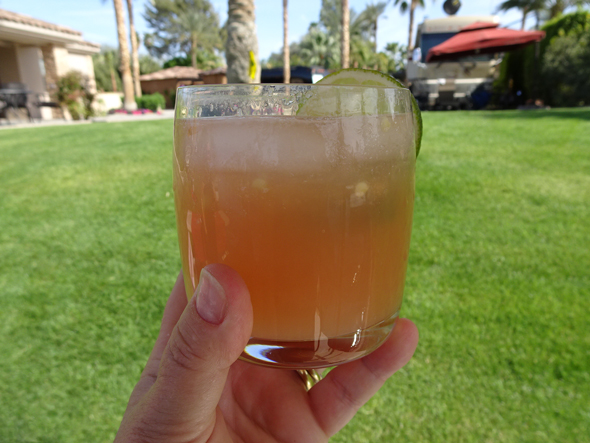 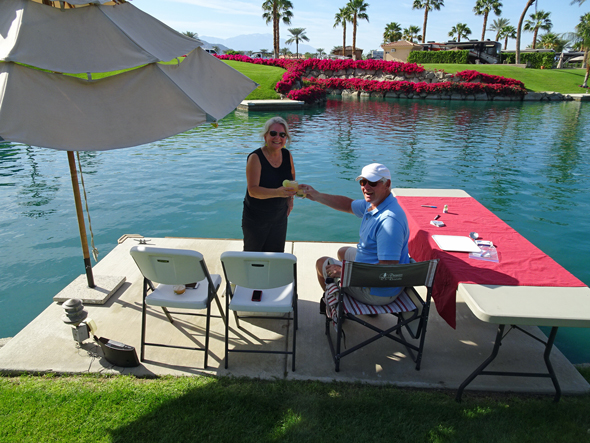 After all the boats and contestants (a few arrived on land via golf carts) had visited our station, we went up to the marina for the post-Poker Run festivities at the adjacent plaza. 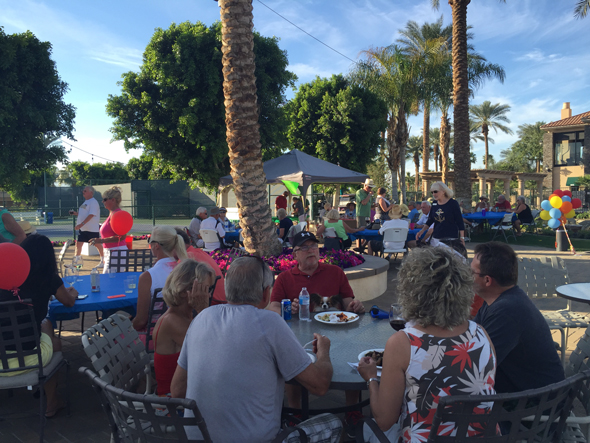 There was a potluck. (The resort restaurant is closed Tuesday evenings.) Participants had dinner while the organizing committee looked over the score cards. Three players had 10-10-10! I'm not sure how the prize money was allocated (remember, I was only required to serve drinks), but one contestant won $250. 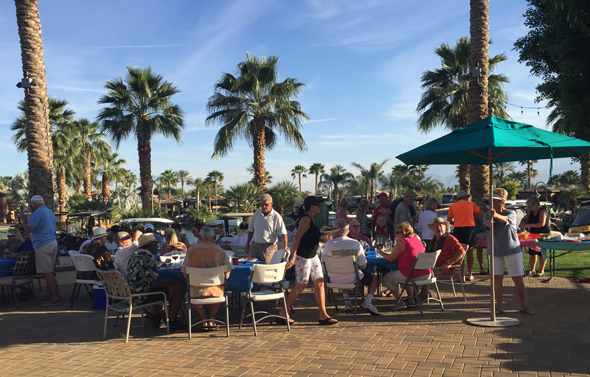 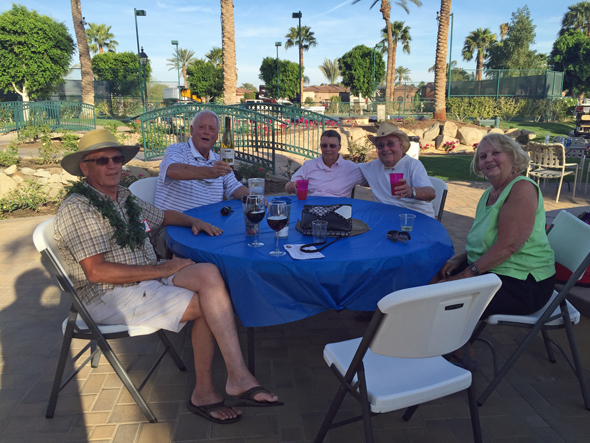 Another successful poker run and another perfect day in the Motorcoach Country Club.

Until my next update, I remain, your day-drinking correspondent.