Indio, California:  I know. This polo-thing is beginning to be a habit. It is always fun to take visitors to polo, as the sport is so unfamiliar to most people - and Mary and Captain Jim have finally returned from their vacation in Hawaii (to their vacation in Indio?) and had yet to attend a polo match... so... here we go again.

Not only had they never been to the polo matches, they had never been to the Tack Room Tavern at the polo club. This great gem is one of the closest restaurants to our RV resort, but I think people sometimes forget about the tavern as it is "the other way" - I mean, away from all the action along Highway 111. 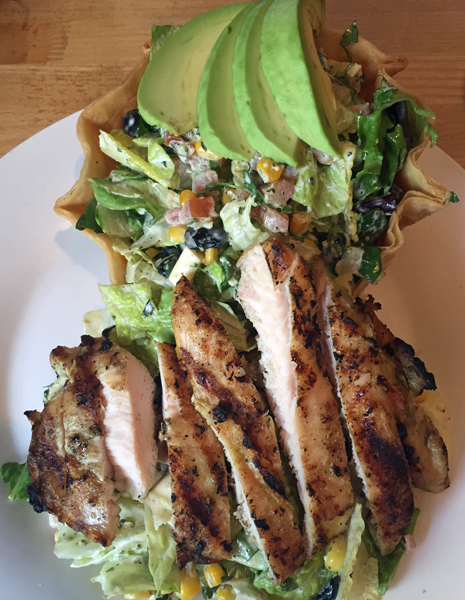 I ordered this great Southwest Chicken Salad. Most of the salad (lettuce, tomatoes, olives, beans, corn, cheese, avocado) is inside a fried flour tortilla "bowl", and the rest of the salad is under a grilled chicken breast.

The slight cloud cover made the 90-degree day nearly easy to tolerate and we (again) parked next to super-knowledgeable people and learned so much about this exciting sport. 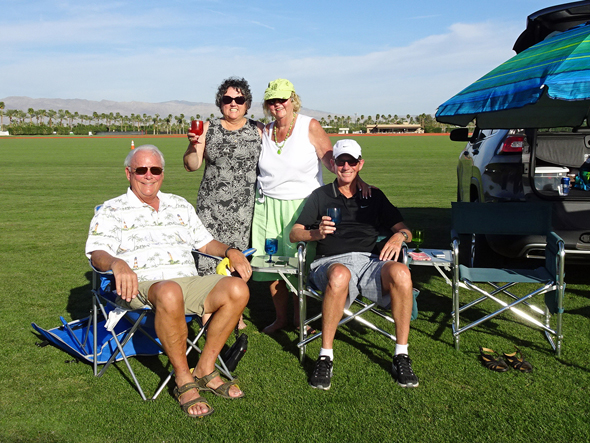 The match today was the most exciting we have yet to witness. The horses were always tearing down the field, so it seemed more like a horse race than a polo match. For the first time, we saw a horse go down (with his rider cascading gracefully off his mount). Neither party were injured and they continued on after only a 30-second assessment. The players all seemed to shake it off, but it really is a terrible thing to witness - the horses weigh around 1000 pounds - held up by those spindly legs. Frightening. Later in the match, a player went flying off his horse. Be careful out there, people!

Still, the sport is fascinating and we will return again and again for the Sunday matches. Thank you, Dear Friends, for letting us introduce you to this exciting sport.

The evening was spent with My Driver, watching the Oscars. We had actually seen nearly all the films this year - a rare event. Congratulations to Leonardo DiCaprio for winning his first gold statue. (Now would you please, please keep away from grizzly bears? Please.)

NEXT UP: Our awning installation is complete - photos coming soon.