I Made a Pinata

Did I ever tell you about the time I made a pinata? I suppose you are wondering... why anyone would make a pinata, when they are plentiful, inexpensive and at every party store in America?

We weren't in America.

We were living in Taiwan and for some ridiculous reason thought it would be a good idea to throw a big Cinco de Mayo/Mexican fiesta party in our back garden. In hindsight, it would have been easier to plan a mission to Mars.

First of all, this was circa 1987. Taiwan was waking up from of a long sad past and business was booming. Many European and American companies were looking to Taiwan for their skilled (not cheap - skilled) manufacturing capabilities. Taiwan was developing faster than the speed of light, and moving away from textiles/plastics into technology, engineering, science and medicine. Not recognized by most world governments, Taiwan was an island in more ways than a map would show.

There is an old cartoon that shows a Chinese dad coming home after a long day at the office. His family is seated around the dinner table, chopsticks in hand. The dad says, "What? Chinese food again?". Yes, it is ridiculous - but true. We ate Chinese food every day when we lived in Taipei. That's just what we did. That's what there was to eat. There were few other choices. Every restaurant was a Chinese restaurant. There were a few hamburger joints that really were not that good and an American-style breakfast place we liked to frequent on weekends. I cooked "American" (and foods from other nations) at home, but it was usually so difficult to find the imported ingredients (and if you did find the ingredient, a bank loan was often required for the purchase). So, we just ate local (trendy foodies before such a term existed). The government even had a monopoly on beer. One brand only - Taiwan Beer. But, to this day, if you were to ask me what I miss most about living in Taiwan, I will answer: the food. The food in Taiwan was out of this world delicious. Fresh!

By the time we left Taipei in 1988, KFC and McDonald's had opened not far from Lisa's school, and Miller Beer was for sale in the new big American-style supermarkets that started popping-up in every neighborhood. Change was so rapid. The entire city was nearly delirious when a pizza restaurant opened in our neighborhood. At last! (I mean, seriously, they have Chinese restaurants in Italy... why not pizza restaurants in Taiwan?) We went to the new pizza place and walked away with sad and soggy memories. I am sorry, but canned baby corn and fried eggs do not belong on pizza!

So back to Cinco de Mayo. Who plans a Mexican party in a land void of tortillas, tequila and cheese? DT and me. I hand-made invitations, cutting sombrero-shaped pieces of yellow construction paper and hand-lettering the date, place and time for 40 guests.

Tequila? It was impossible to purchase tequila in Taiwan in the 1980's, but Dave's company had an office in South Korea, home to several US military bases. US military bases = a steady supply of black-market booze. Word went out to the Seoul and Pusan offices that anyone coming to the Taiwan branch needed to bring a bottle of tequila or triple sec for the lau-bawn ya (bosses wife). It worked - by May 5th, we had 11 bottles of tequila and three bottles of orange liquor. Woot! There were no limes on the island at the time, but I found bottled Rose's lime juice... and if you even suggest I should have just purchased "margarita mix" in Taiwan in 1987, I will wet myself laughing.

There was a little shop in the Tien Mou (roughly translates to "breastfeeding mother") neighborhood that specialized in imported groceries. It was called Johnson's. (I can guarantee the Taiwanese owner of that shop was not named Mr. Johnson, but everyone called him Mr. Johnson. So funny.) He sold stale Cheerios, processed Kraft cheese, catsup, peanut butter, Pop Tarts and other such stuff Americans seem to not be able to live without. No Doritos-type stuff though, so I needed corn tortillas and dang if Mr. Johnson didn't have them for me in a few days. They were frozen - and they may have been frozen for three years before they reached my hands - but I cut them into triangles and fried the wedges in oil to make tortilla chips. I made the salsa - fresh vegetables were readily available. Other items were procured from Hong Kong, where it was easy to locate "real" cheese (cheese that actually required refrigeration - not processed junk).

The day before the party, a friend phoned to say she had been to such-and-such a street and had witnessed a big basket of avocados! Avocados? In Taiwan? I went immediately to this open-air market and found six ripe avocados! So excited, I gathered them up and asked how much? $5. Each. We had guacamole! The avocados were imported from Israel of all places. This was turning into a very international Mexican fiesta. 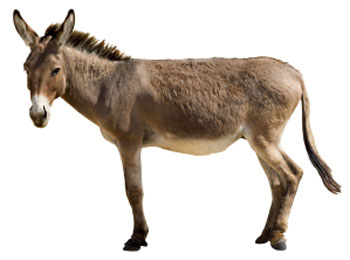 But what about the pinata? I decided we needed to have a pinata. A burro pinata! I had no idea how to make a pinata. There was no such thing as a pinata-making book and Al Gore hadn't invented the internet yet, so I couldn't do a google search on the technique. So... I blew up a tube-shaped balloon to about the size of a loaf of bread. The balloon would be the "body" of the burro. I wrapped the balloon in several layers of flour-and-water soaked strips of torn newspaper - my version of paper mache - and placed it in the oven (with only the pilot light lit) so it would dry overnight. The next day, I cut a square into the "back" of the burro, popped the balloon and stuffed the empty cavity with a dozen numbered ping pong balls (one thing very easy to find in Taiwan!). The numbers on the balls would match a door prize for the lucky pinata smasher and friends. Somehow I fashioned a neck and head (toilet tissue tubes?) and legs (chopsticks?) and used wet strips of paste-soaked newspaper to form a pretty-decent donkey-shaped frame with giant ears. Again, it went into the dryer/oven overnight.

Next, Lisa (5 years old) and I cut a massive amount of multi-colored crepe paper strips and glued the fringy layers to the burro. The result was a the best-looking burro pinata in the entire nation of Taiwan! Okay, it was the ONLY pinata in the entire nation of Taiwan. Lisa and I were so proud of our little pinata! I imagined the burro's belly spilling open and a bunch of adults racing to grab a ping pong ball and claim a door prize like silly school children!

Well, it almost happened that way... 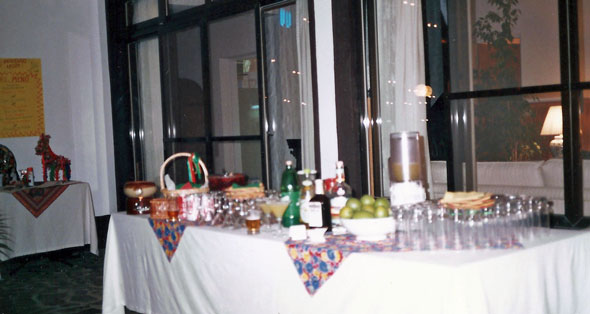 Look closely and you will see the little burro pinata on the table to the left.

The night of the party, our garden was so pretty. We rented tables/chairs and set them up "beer-garden style" on the lawn with colorful tablecloths. Twinkly party lights were strung above. Glass vases with bright flowers and cactus plants decorated the tables. We hired a bartender with a huge amount of glassware and set up a bar on the patio. Dinner was a big success. 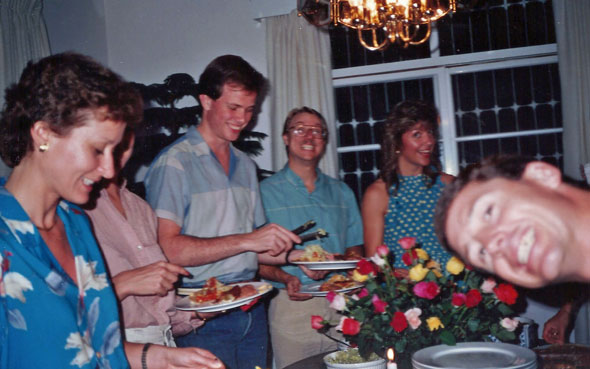 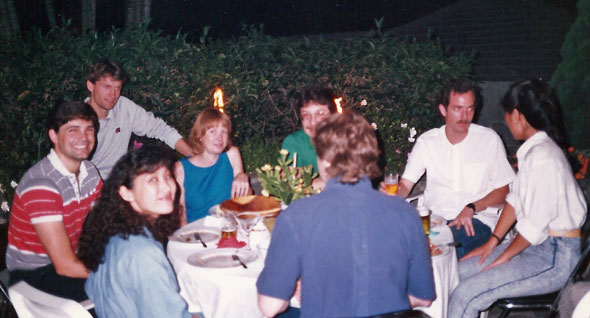 Everyone loved the food and had so much fun. We had guests from all over the world and right next door. 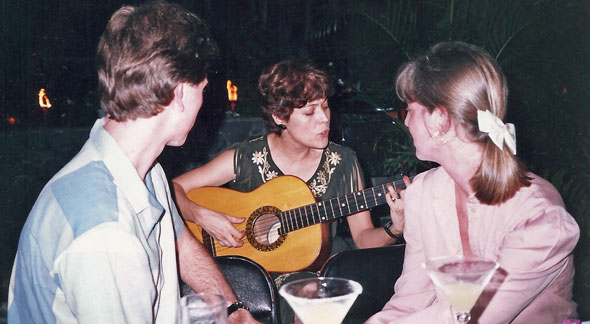 The lone Mexican (or was she Spanish? I can no longer recall.) living on the island attended and brought her guitar and did a dance with a lariat. 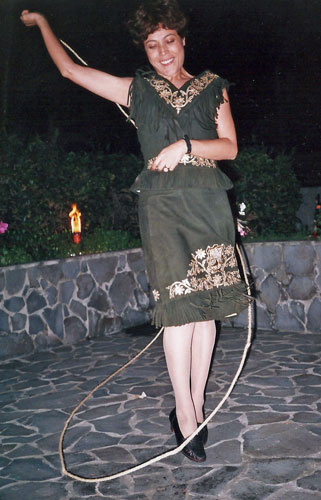 Then it was time to break open the pinata! Some guests had never heard of this game, so after a quick explanation, a friend was blindfolded and given a broom handle and the real fun started. Whack! Nothing. Another, stronger, man tried. Whack! The pinata did not break. Next up was the visiting Mother of a co-worker. She was vacationing from England and made me look tall. This teeny woman was blindfolded and took a swing with the broom handle and wiped-out most of the rented glassware on the bar table! The sound was ear-shattering, but no one was injured and we all laughed (we still laugh about Brian's mom taking-out the bar). 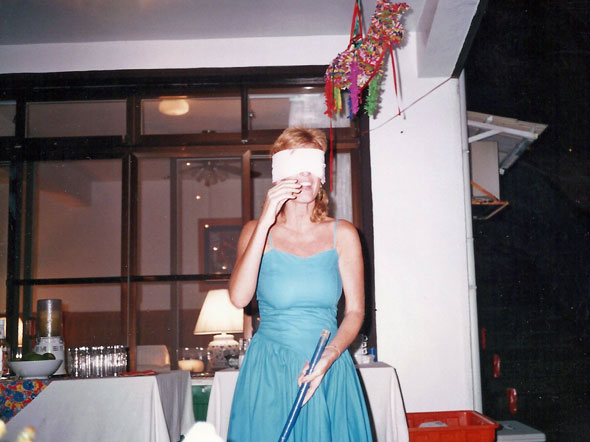 The only photo of the pinata hanging from the porch awning, with one of our friends ready to give it a whack. 25 years later, I realize above the bar was probably not the best place to hang a pinata!

Finally, after ten people hitting the damn donkey without a fracture, a big brute from South Africa took a whack at the burro with a baseball bat - without a blindfold - and finally made a dent in the shell. I had made the burro too well and, combined with heavy humidity on the island nation, that soggy sucker wasn't going to give. So, the pinata was ripped open, the ping pong balls bounced everywhere and - finally - our tipsy guests chased them down to claim a prize. 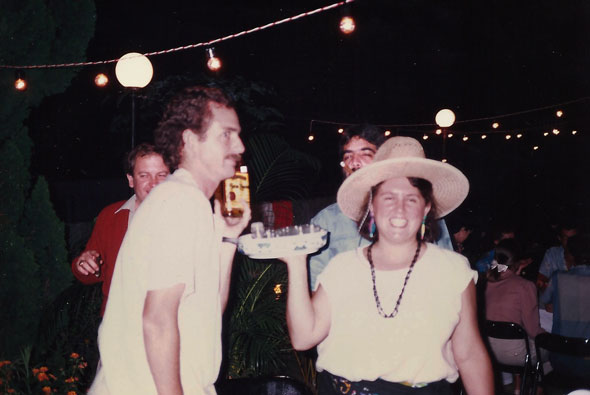 I just remember having a lot of fun. Dave says he doesn't remember a thing.

After we left Taiwan, the tradition continued and there was a Cinco de Mayo party for years. Maybe the party lives on to this day? It certainly would be easy now - since there is a Costo in Taipei.

Until my next update, I remain, your fiesta-throwing correspondent.