Dallas, Texas: Our day started very early and very well. Awake before 6 o'clock to watch the men's 1500m final at the World Championships from Daegu, Korea. Duck runner Matt Centrowitz ran an amazing race - and an unbelievable 51-second last lap to finish in third for a bronze medal!!! Amazingly enough, quite a few of our pals were also awake watching the race (on the internet) and quite a few of our pals are in Korea for the track meet. Text messages, Facebook and Twitter were on fire with the news. No matter the time, Coach Lananna phoned DT from Korea after the race. Vin was a very happy man.

A very joyful start to our day and we were hopeful Matt's medal was the start of some positive Duck mojo for the Oregon v LSU game this afternoon.

It is very late as I type this column. DT has gone to bed. But I am awake editing photos and posting my journal because I just ate a Snickers Ice Cream Bar and feel kinda sick I just can't sleep until I have written down my thoughts about the day... which did not turn-out quite as I had hoped. It was a terrible football game. The Ducks lost Big Time. On national television. Here is a photo-synopsis of the day:

We all met at Boomerjack's in Arlington, near the stadium. Obviously you can see this is a first-class establishment. The restaurant had set up two tents in the parking lot (one for Oregon, one for LSU). They were only serving Coors and Coors Light. It was 357 degrees. 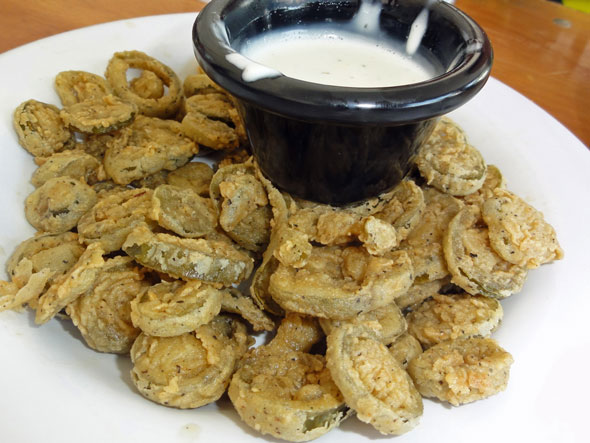 We proceeded to order mounds of healthy foods, such as deep-fried jalapenos. 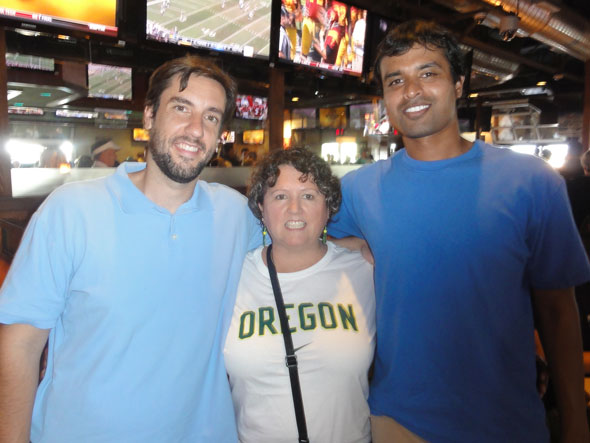 The GW group came looking for us again. Clay loves Our Ducks, but predicted a whooping tonight by LSU. 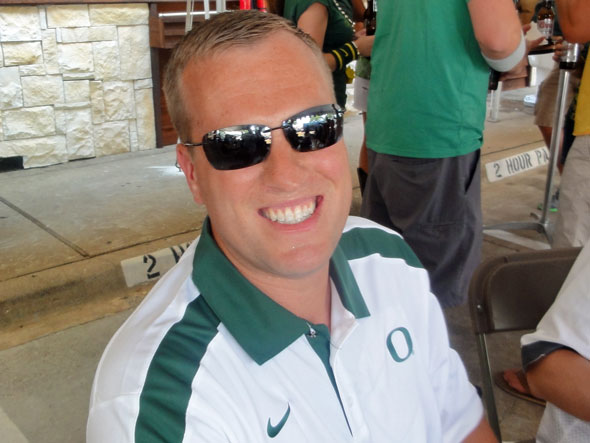 Wait a minute? Isn't this our house sitter? Again at an away game? Hey, Brandon, who is minding the fort?

Brandon's house sitting gig is the best job. EVER. 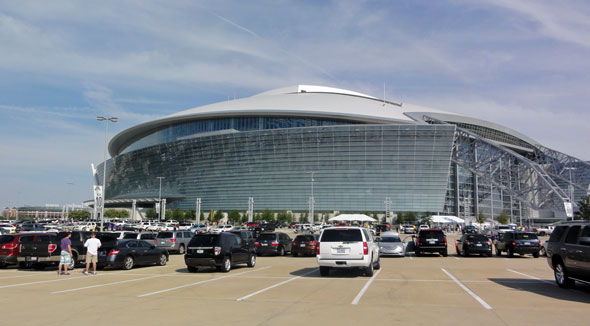 Time for the game! Cowboys Stadium is unreal. Beautiful. Huge. Over-the-top spectacular. It was worth coming to Dallas and having our butts kicked just to experience Cowboys Stadium and pay $9 for a beer. 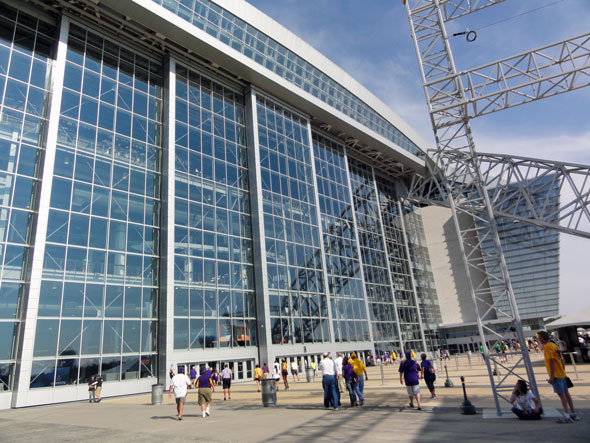 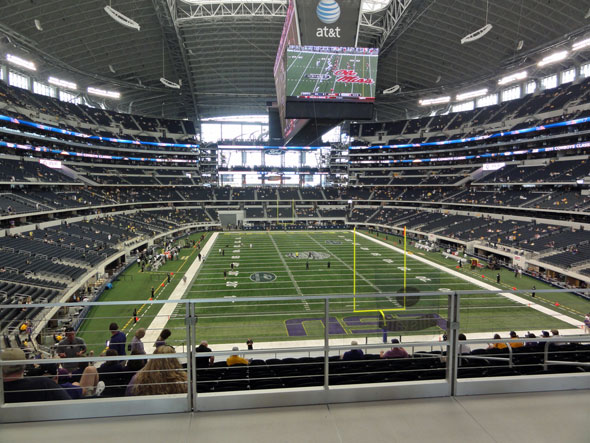 The place is massive. 88,000 fans were in attendance tonight. 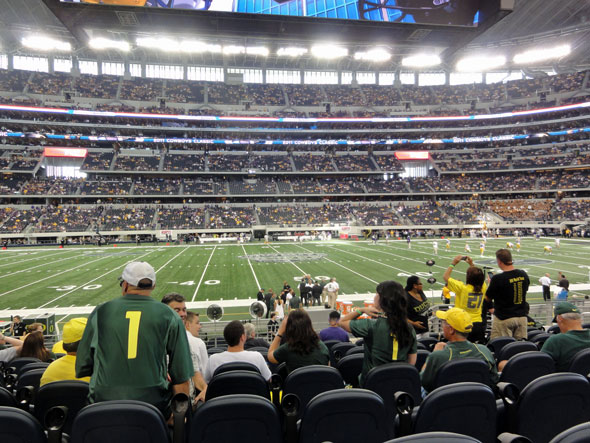 We were on the 45th yard line, 12 rows up from the field! Incredible seats. 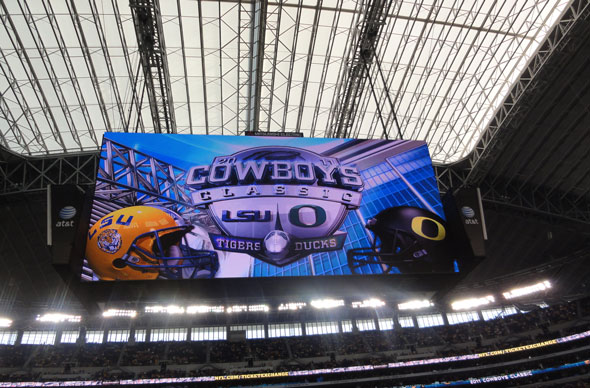 The view of the video board was impressive as well. It is 152 feet long. 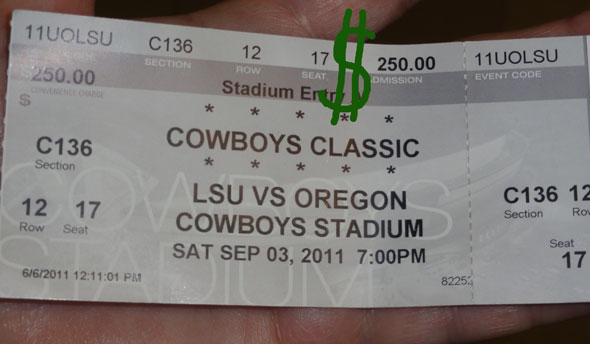 Ouch. The ticket price would have been easier to swallow if we had won. 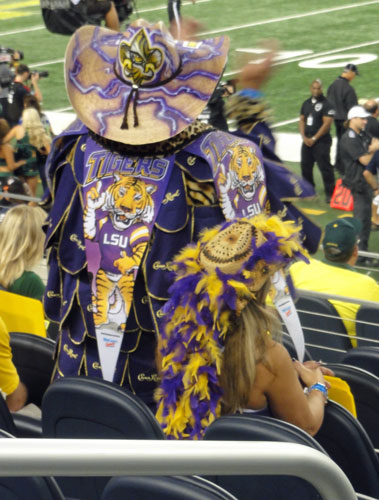 Several of the LSU fans were particularly brutal and rude. They would come right up to our faces and yell, Tiger Bait, Tiger Bait. I was confused as to why this was supposed to be an insult. I am also confused as to why they have an Indian Tiger as their mascot. I was confused why this guy (above) was wearing a cloak made from velvet Crown Royal whiskey pouches. My all-time favorite was the LSU fan who said to me - long after the game was over, after LSU had won 40-27, and we were in the parking lot - "LaMichael James is a fag." 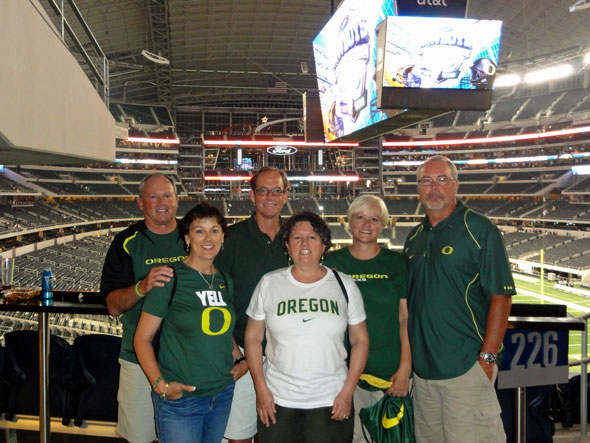 The game is over. The stadium is nearly empty. We are still smiling. We have to think positive - our home opener is next Saturday!

Until my next update, I remain, your GO (spelled correctly) DUCKS correspondent.

« Hanging with Leo Back to Los Angeles »