Portland, Oregon:  The weather is always an issue in Portland in March, but Mother Nature smiled on the City of Roses today. Sunny! No rain.

The kids were up and out early. They planned the morning at the Oregon Zoo, lunch at Cafe Yumm!, wine tasting at Ponzi and dinner at McMenamin's Cornelius Pass Roadhouse (CPR). That is a perfect day of Oregon tourism and a perfect variety to showcase the area for guests Kevin and Mike.

Dave and I planned a perfect day ourselves, enjoying international track and field competition. With only the pole vault competition yesterday, this morning the meet began with a variety of heats in many disciplines, quickly narrowing each discipline down to the best-of-the-best. Happily, Duck-alum Matthew Centrowitz made the final in the 1500m.

It was an amazing day for another Duck - Canadian Brianne Theisen-Eaton (married to the WGA). Brianne fought hard in the one-day five-event Pentathlon. She won the 60m hurdle race in a personal-best 8.04 seconds, 4th in the high jump (6.06 feet), 5th in the shot put (45 feet), 2nd in the long jump (21 feet)... and then it all came down to the final event, the 800m. Brianne was in third place before the final event and she is known to be a strong runner and it was thought she could run a fast enough half-mile to move up to 2nd place and capture the silver medal... but... if she could out-pace the woman in 2nd place by 13 seconds, Brianne could win the competition and have a gold medal to wear around her neck.

The gun was fired and Theisen-Eaton took off and ran in second place for three laps. On the last lap, the heptathletes, including Ashton Eaton, at the high jump pit could see the woman in first place was struggling and told Brianne to goooooo - and she did. She kicked it up several notches and won the 800m in 2:09.99.

And then began the difficult scoring. Each time, height, length or distance of each event corresponds with a given number of points. Each event is tallied. It takes a while and it must be checked and rechecked. The compilations can usually not be figured in ones head (even DT can not calculate this). 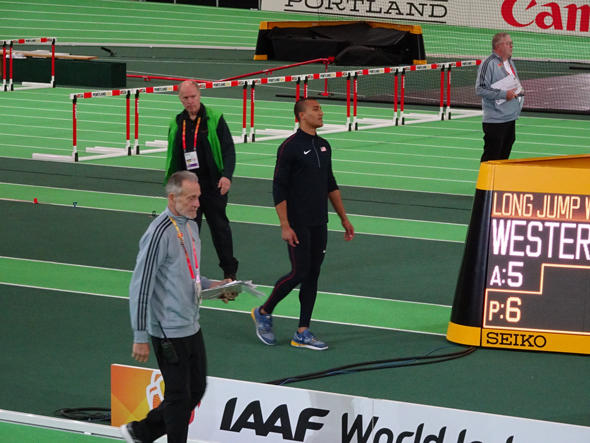 Someone... who probably should have been over at the high jump pit... but when that certain someone is the World's Greatest Athlete, he is given a bit of leeway... was pacing and actually grimacing as he awaited the final tally of his wife's performance.

When the final scores popped-up on the video board, the entire crowd went wild - Brianne had won the gold medal by a slim little 34 teeny points, moving her into the 8th highest point tally (4881) of all time! 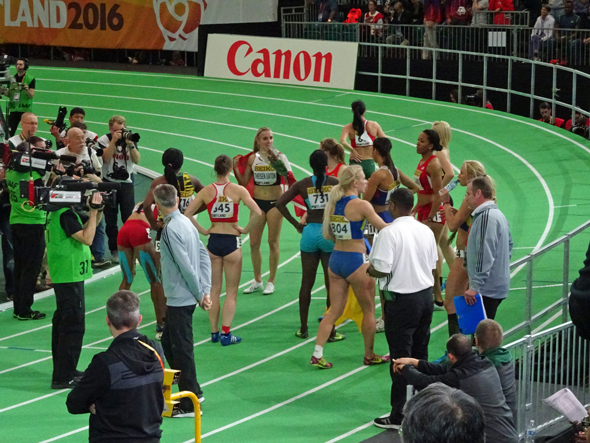 The Pentathletes congratulated each other and took a victory lap in unison - led by the 2016 Gold Medalist. What a wonderful evening of competition. I was crying like a baby. 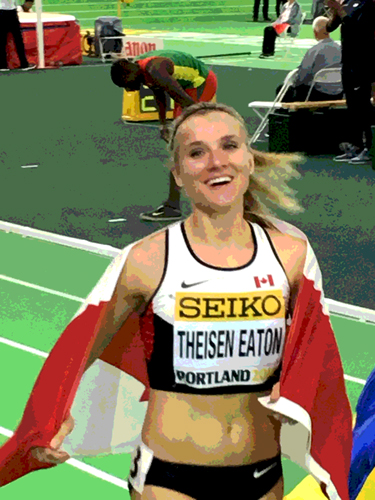 At the end of the competition this evening, Dave (and I) were escorted down through the bowels of the convention center to an awaiting (I kid you not) police-escorted motorcade. Dave was to present the medals to the men's shot put winners and the medal ceremonies were to be held downtown Portland at Pioneer Courthouse Square.

The medalists each had their own Chevy Suburban, adorned with either a gold, silver or bronze medal. The medalist and his/her family, friends, coach, etc., would ride to the ceremony in the Suburban, while the presenters, press and announcers would follow behind in a small bus. It was all kinda exciting, and the "bus people" joked that this was the first time we had enjoyed a police escort without being handcuffed in the back of a squad car.

Pretty sure most of them were kidding. 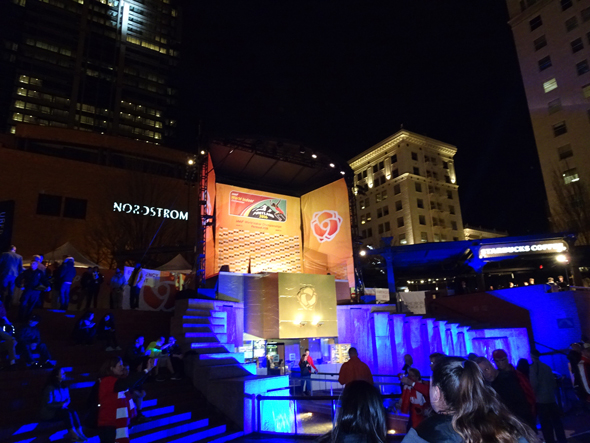 Holding the medal ceremonies outside the arena is first for a World Indoor. The idea was to invite all of Portland into the realm of the sport. Admission was free, there was live music each evening, activities for kids and a beer garden. The square was packed for the first evening. 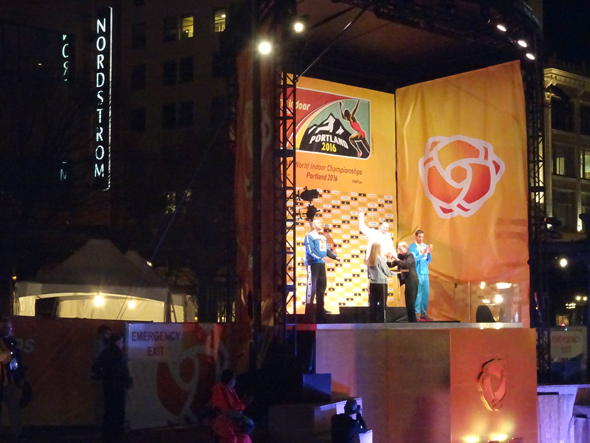 Looky My Driver awarding medals to gold medalist Tomas Walsh of New Zealand (with a winning toss of over 71 feet). The silver medal went to Andrei Gag of Romania and Filip Mihaljevic or Croatia took the bronze.

The University of Oregon sent a twenty-piece orchestra to play the national anthem of every country winning gold and flags were raised at the opposite end of the square as the podium so the winners can see their flags. 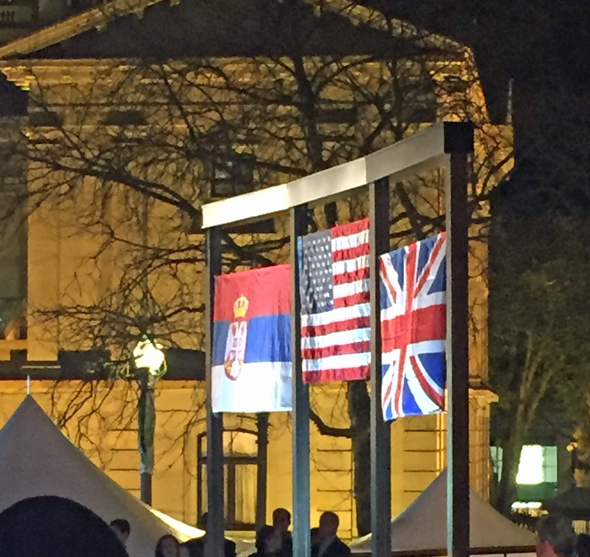 Example of a flag ceremony at Pioneer Courthouse Square 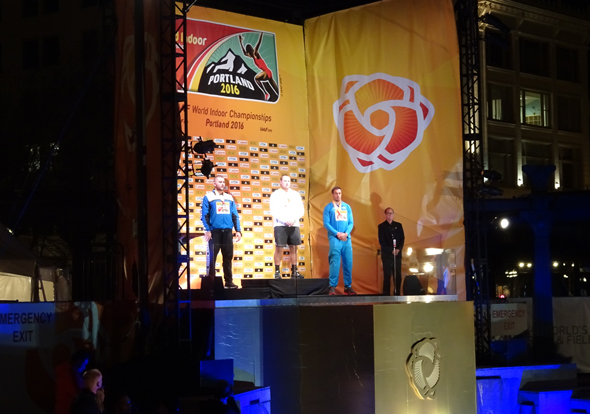 Ashton Eaton was in the square with his in-laws and his mother to watch as Brianne was awarded a gold medal. A very happy day for their family.

In other university news, the Oregon men's basketball team beat Holy Cross in the first round of the NCAA basketball tournament.

After the ceremony, we went home, happy to find Lenny had arrived from Los Angeles,  and collapsed into our bed. Rinse and repeat for tomorrow.