Who Do That Voodoo?

TGIF! Things have just been a mess around here. Okay, not as bad as our septic system failing in September... but I swear someone somewhere is sticking needles in a doll of my likeness. Left-over Halloween pranksters?

As you may recall, we are planning to leave for the winter Monday (9 November). Our schedules are pretty full with tasks and errands, not to mention DT has his usual full-slate of meetings surrounding the various track meets he is helping produce.

And there is a big change at our house - we have a new housesitter! Suzie moved in Monday and is settling into the nanny/mother-in-law/housesitter apartment above our garage. The quarters are nice - living room, kitchen, bathroom, laundry and bedroom. Our long-time housesitter, Brandon, had been in the apartment for about five years. After he left (so rude - apparently he decided to buy his own house and get married!) we had the apartment professionally cleaned and began readying for Suzie. The TV had to go. It was ancient. One of those bulky 100-pound units with built-in DVD and VHS (VHS!), with no capacity to receive HD signals. We know a guy who will take old TVs (he ships them to the Marshall Islands!), so out with the old and in with the new. A quick trip to Costco and the space in the entertainment cabinet was filled with a nice flat-screen.

I ran the dishwasher in the apartment and realized it would not drain. I ran it again. Nothing. I made an appointment for a repair.

Meanwhile... three weeks ago I had made an appointment at a local Jeep dealer to have my new Cherokee checked-out. There is a minor not-critical software upgrade needed (no, not the one where someone can log into your car and cause it to careen out of control... I already did that fix). The Jeep was scheduled to be at the shop Wednesday at 10:30a. I arrived on time and was ushered into a line of cars, much like going through a fast-food drive-through line. ONE HOUR LATER it was my turn. After explaining to the tech the fault code, he suggested that maybe I wasn't completely correct. Holy Moly Dude, I have been driving the car for 2000 miles and I certainly can read (I know all my letters AND numbers). (Well, that is what I wished I had the nerve to say to him.) It was as if he didn't think a grey-haired Bubbe knew what the heck she was talking about... so he wasted 15 additional minutes driving around the block with me, which - of course - only proved that the fault code did appear.

Hey, are you still sticking needles in that voodoo doll?

Next, I was ushered to a check-in station. A new guy placed a computer reader-thingy into my car which gave him all the important info - name, rank, serial number - from the vehicle. He took my address and fiddled around for several minutes in his computer program until he finally asked me if I needed "alternative" transportation. I told him no. I would wait in the lobby for the repair.

This is when he told me he wouldn't even get to my car until most-likely Friday. Or maybe Monday. Say what? I was so confused. If he wasn't going to even look at my car until Friday, why didn't he make my appointment for Friday? He suggested that I rent a car from them and come back on Monday... there was then a mention of Tuesday... to get my car.

I said no and that I would be leaving now and taking the Jeep with me. I was not rude. I cannot be rude. I was just so completely dumbfounded that a business can operate in this manner.

A better response to his rental car suggestion would have been that HE rent a car, park it on his lot for three days, then I would drive my Jeep back to the dealership so he could fix the software! But, like I said, I can't be rude... this thought was just percolating in my little brain and luckily (for once) the brain engaged before the lips.

That would be no.

I bet 100% there is a Jeep dealer in the Coachella Valley.

Would this be a good time to mention the letter received this week, from the needlepoint shop I have been patronizing since Lisa was in middle school, declaring they are retiring/closing?

Meanwhile... I went down to the cable company to get a receiver box for the new TV and a new box for the guest room TV (it was no longer working). Take a number. Wait. Wait. Wait. The clerk gave me two new boxes and they were installed with ease - even by this grey-haired Bubbe.

But this is where the trouble started. Several days later and several hours on the phone with a lovely woman in Manila (practiced my Tagalog in our 72 minute conversation), it was determined that while returning the old guest room box, the clerk somehow made an error (No. Could. Not. Happen.) and turned-off/cancelled the  wrong box in our house... which snow-balled into a cascade of technical trouble John Walson could have never imagined. Why do TV cable boxes need to talk to each other? Are they lonely?

Somewhere, someone is digging that voodoo needle pretty deep. Into my brain.

The appliance repairman arrived Thursday to have a look at the dishwasher in the apartment. The 12-year-old unit was toast and it would cost $100 less to repair it than to replace it. We bought a new dishwasher. Ka-ching.

It is very frustrating when technical issues arise, appliances fail and people do not meet your expectations. It was a bad (long) week. Enough complaining. So what if I have a (non-safety-issue) fault code pop up on my dash occasionally? So what if one television in the house is not working? (I am truly sorry our new housesitter needs to waste an hour of her time waiting for a dishwasher installation.)

On the positive side: Since I did not have to wait all afternoon at the car dealership, I had time to finish organizing the pantry and my office for our departure. Since the appliance store is near my sister's office, I was able to have lunch with Renee before purchasing the new dishwasher.

And then there was this: 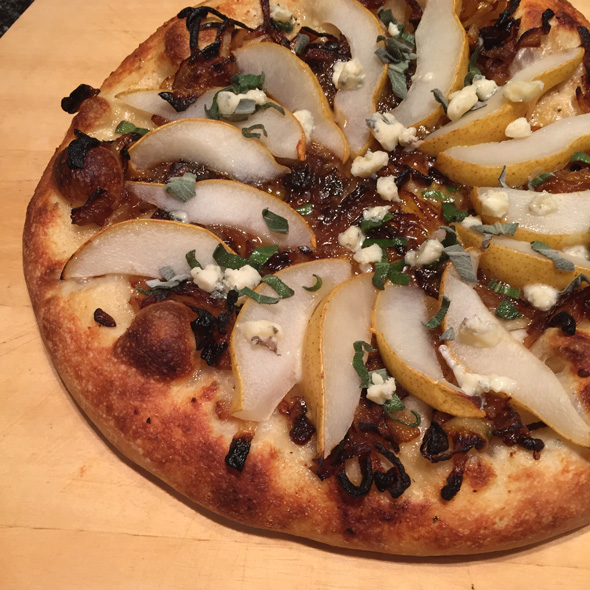 I made a pizza with caramelized onions, pears and gorgonzola.

Until my next update, I remain, your "nearly packed" correspondent.
« Halloween Masquerade Ball On The Road Again »