Skagway, Alaska: We woke in Skagway. Neither of us woke during the docking process. It's like we went to sleep in Juneau and magically woke in Skagway. The weather continues to be the first topic of conversation - nearly 80 in Skagway today. No one can believe our luck to visit Alaska and not need even a sweater! 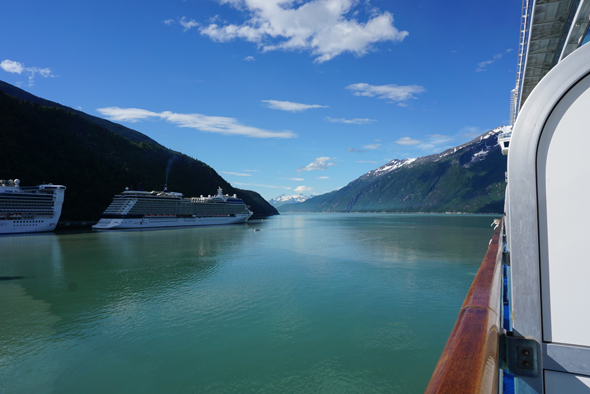 The view from our balcony in Skagway

Before leaving the ship for our excursion, Dave and I had a walk around the ship and I snapped a few photos for your entertainment 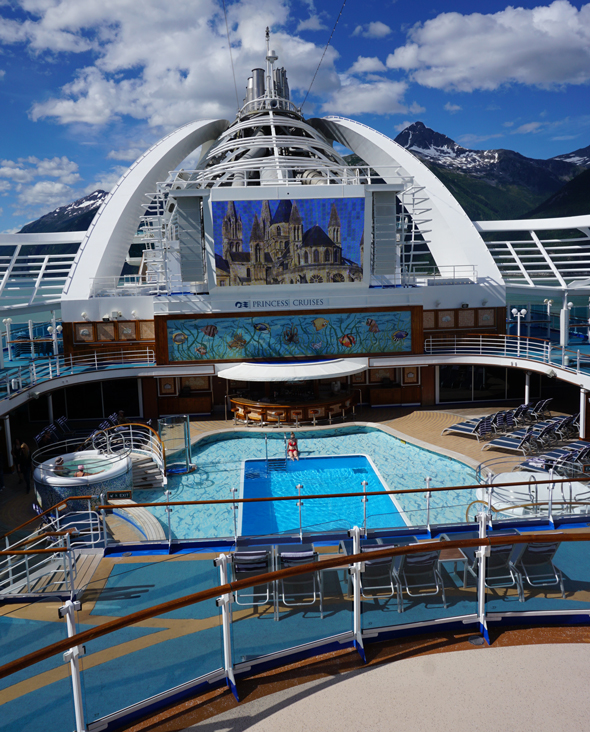 One of the pools - the big screen above the pool shows movies "under the stars" several times a day. 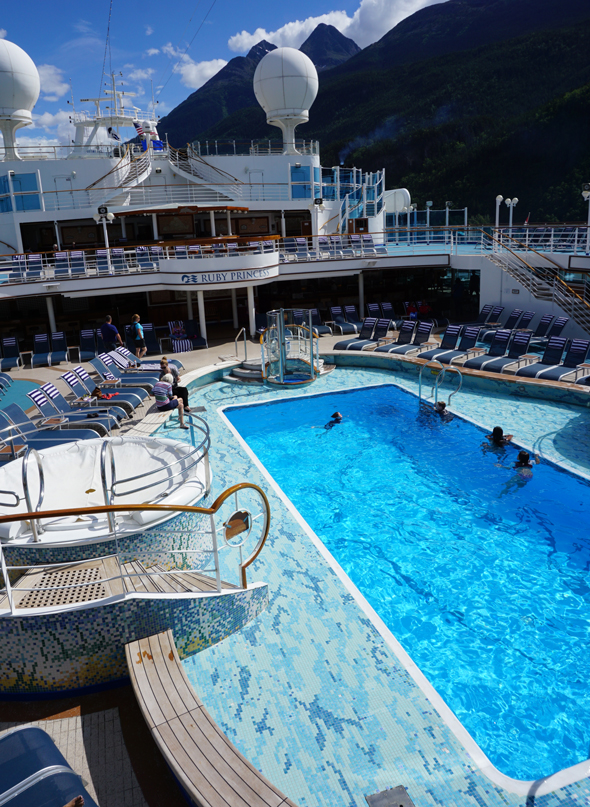 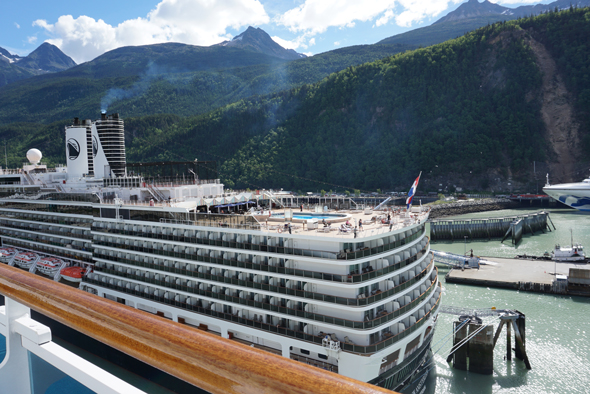 For comparison, the pool on a Holland American ship docked next to the Ruby Princess 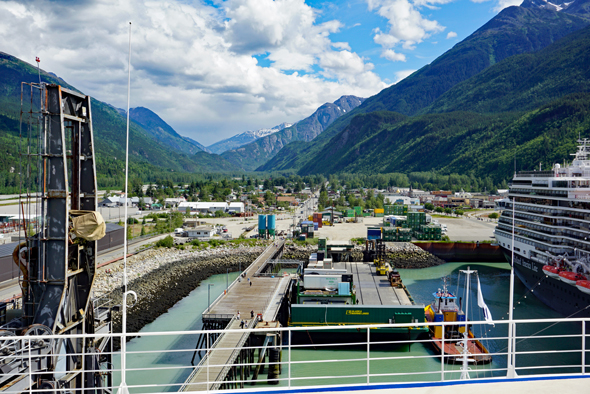 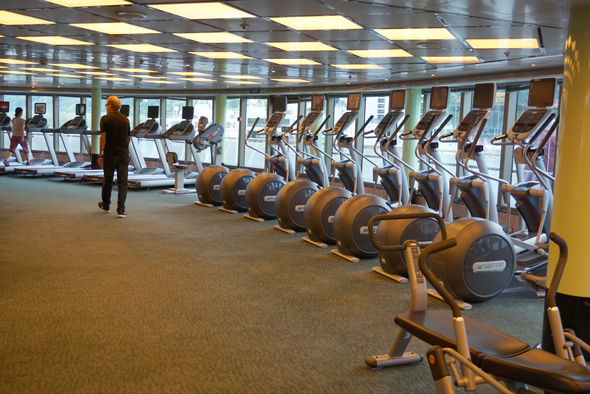 Part of the massive fitness center aboard the Ruby Princess

Our plan for the day was to ride the famous White Pass Railroad. This touristy train carries riders to White Pass (at the Canadian border) and returns along the same route. The train is some-sort of miracle, being built over treacherous terrain, over steep canyons, and through deep tunnels. Upon completion, the train made travel from Skagway to the east coast of Canada possible, but mostly it carried gold miners and their equipment during the gold rush. Golden spike and all that. 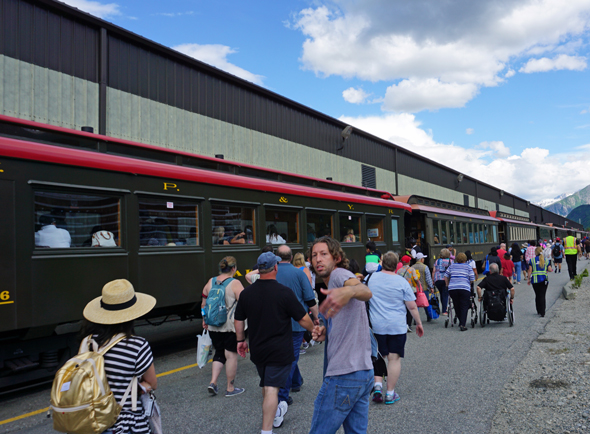 Lenny, herding us all aboard 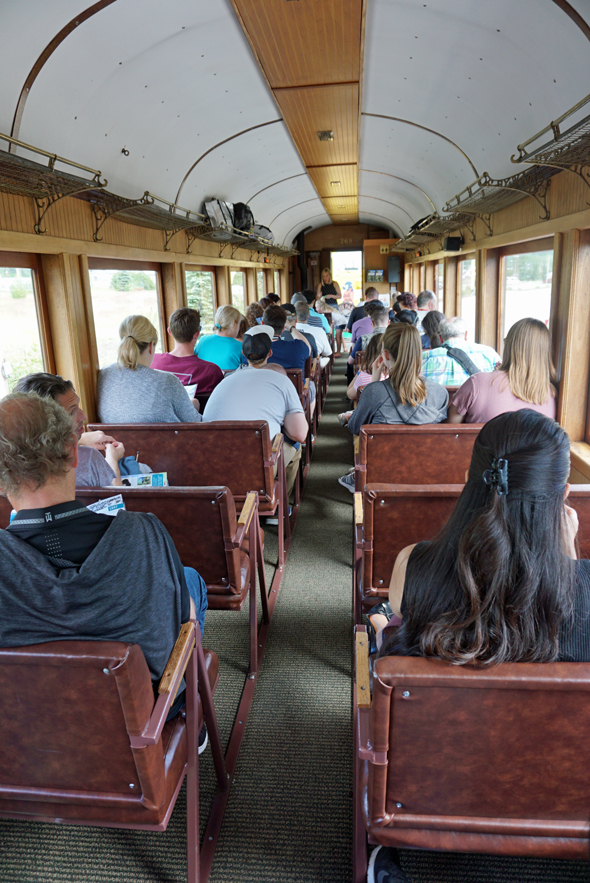 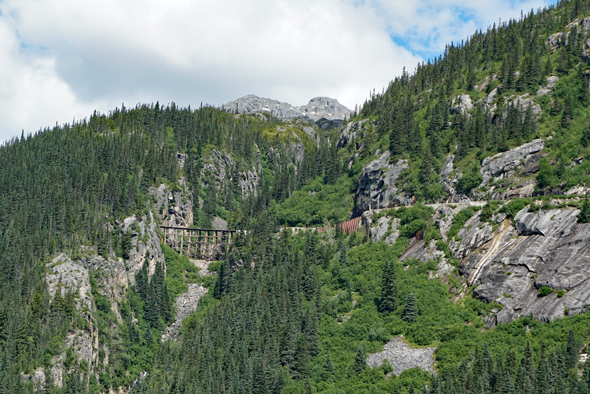 It has a few treacherous portions... 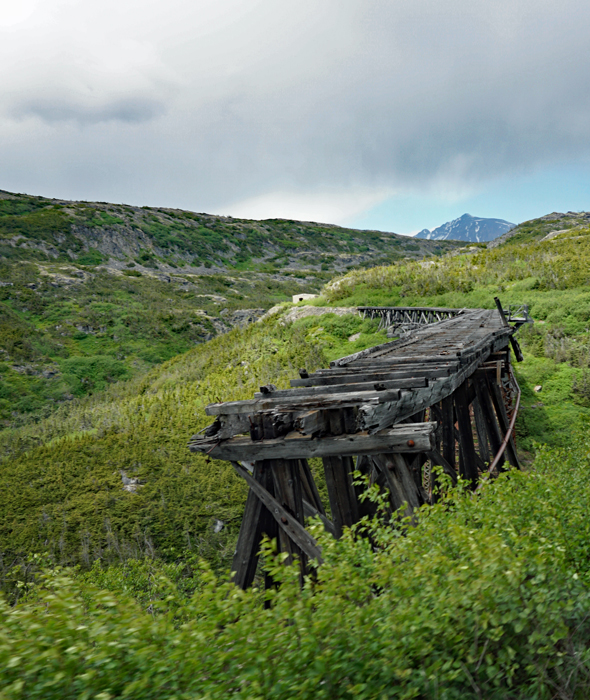 And a few portions no longer used at all 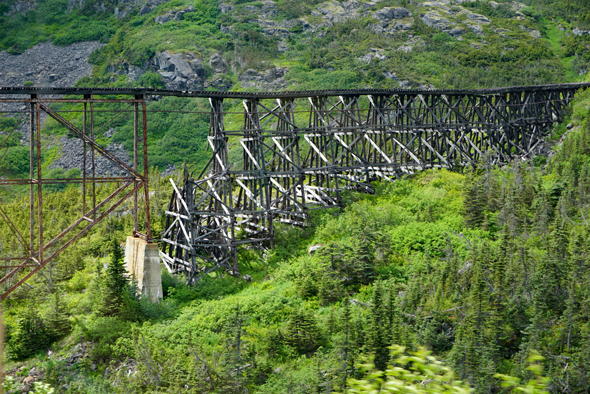 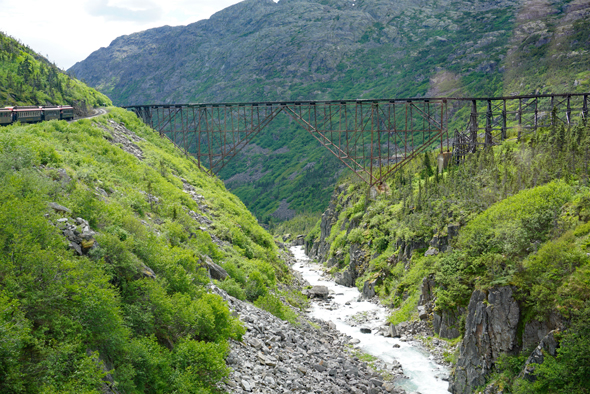 Another view of the "old" tracks - no longer in use. 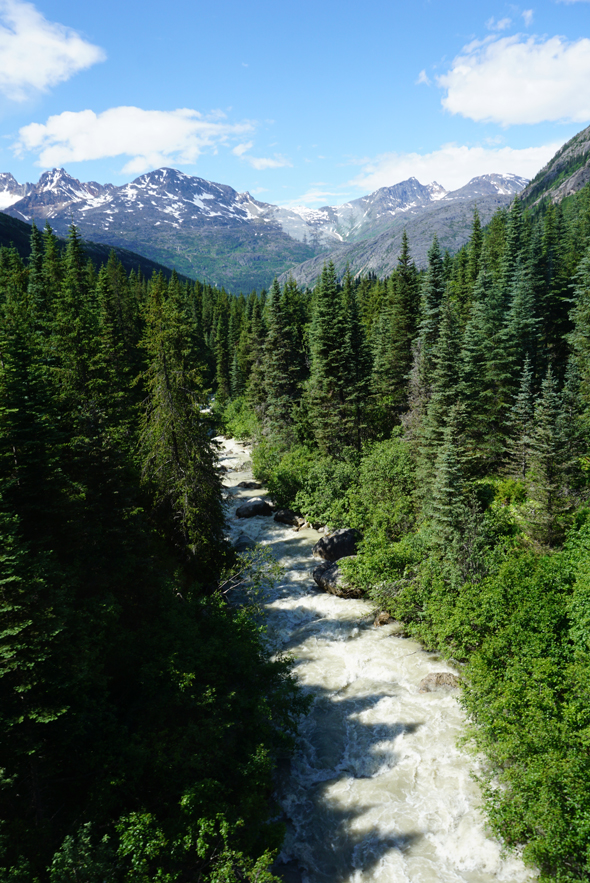 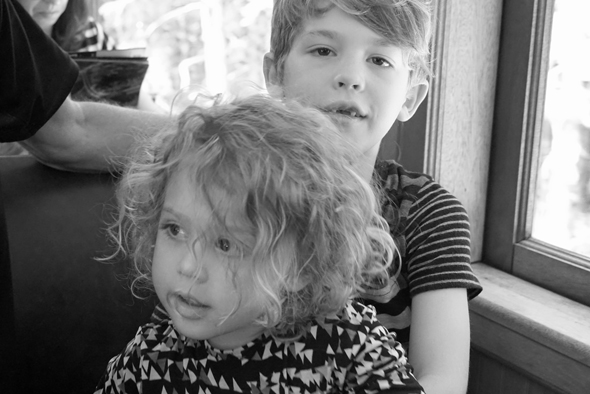 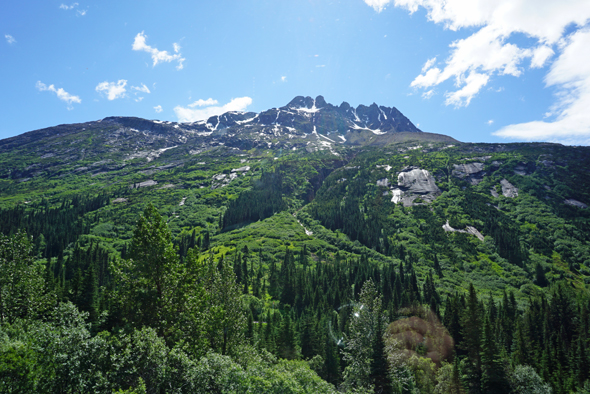 One of the staff said the Sawtooth Mountains are visible about six days per years. Today was a perfect day. 78 degrees in Skagway. Locals were complaining about the heat. 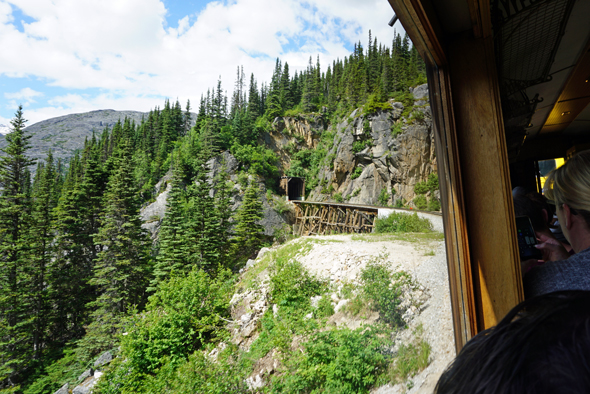 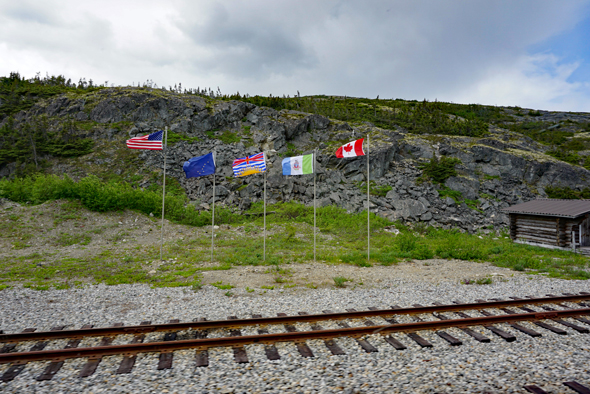 At the top of White Pass, flags fly representing the USA, Canada, BC, Yukon Territory, and Alaska. The cabin to the right used to hold customs agents. Today, we did not need our passports, but were not allowed off the train at the summit. At this point the train reverses the route and returns to Skagway. 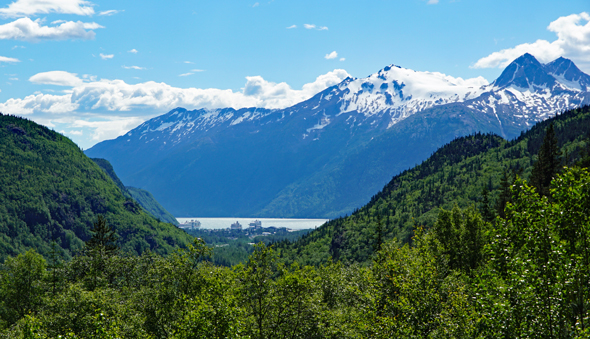 From one point up the mountain, rider can look down to see the cruise ships in Skagway Harbor. 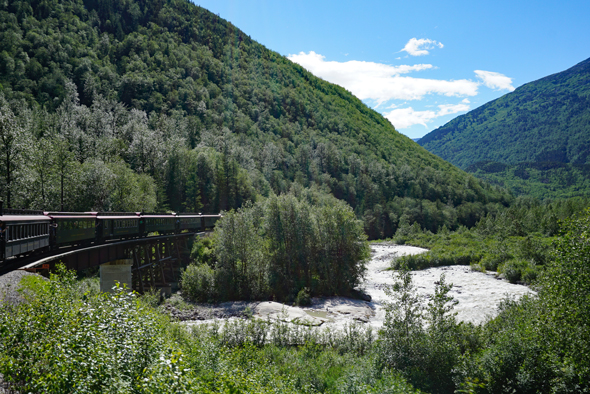 The White Pass Railway heads back to Skagway

The White Pass train ride is the most popular shore excursion in Skagway and I highly recommend the train, but Leo and Lucy were not as excited with beautiful scenery as the adults.

After returning to Skagway, Lisa and Lenny took the kids to dinner while Dave and I walked into town. 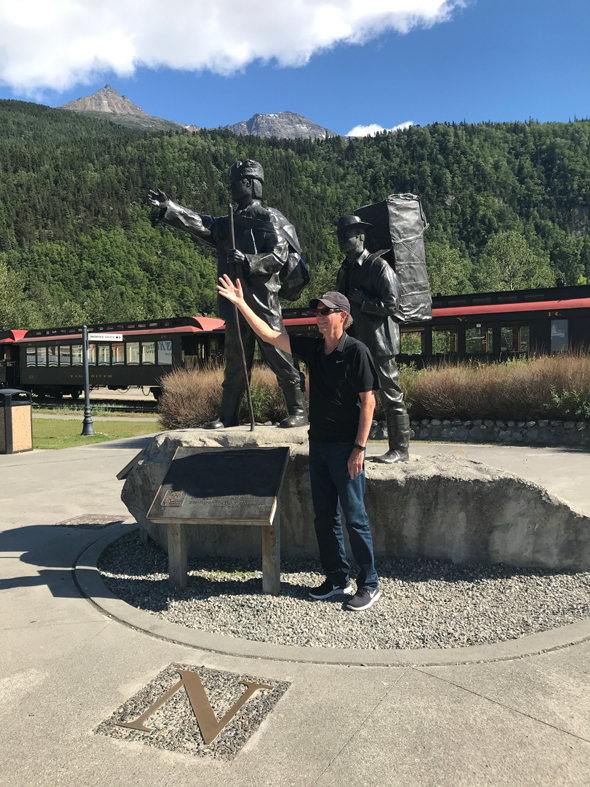 North to Alaska! The gold rush commemorated in statue. 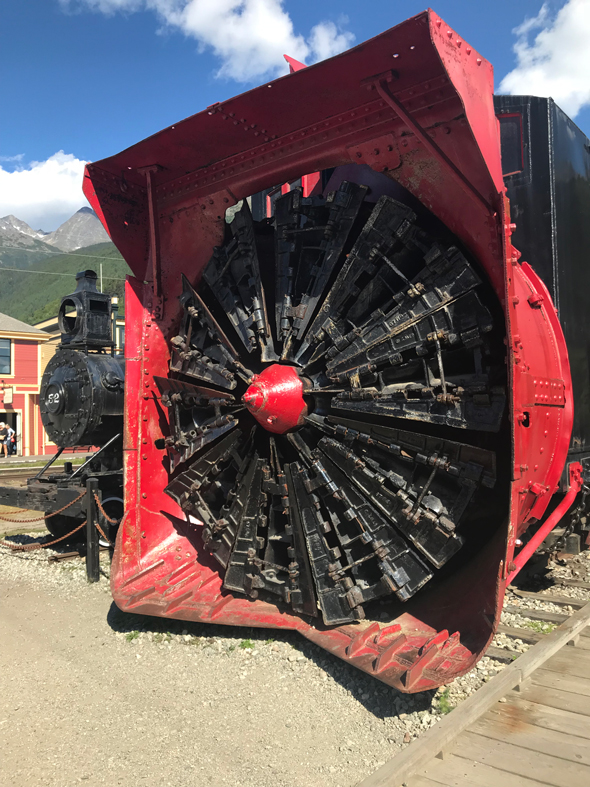 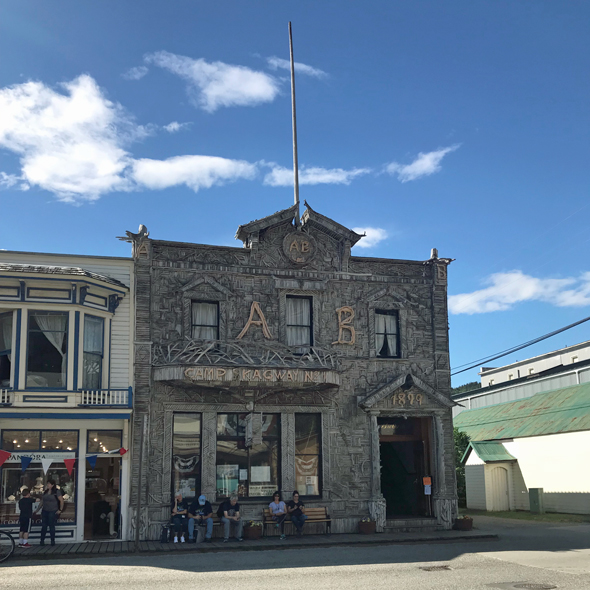 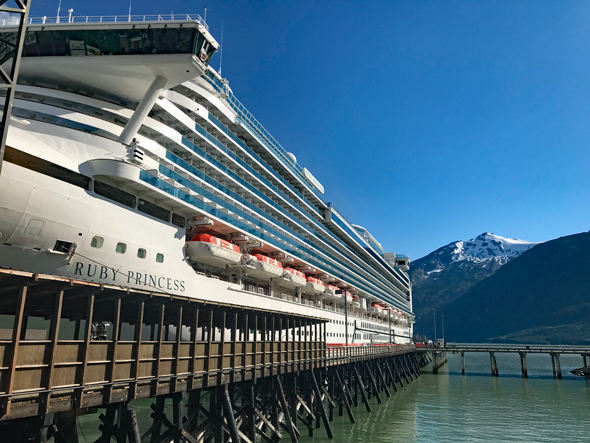 The Ruby Princess in Skagway

As the ship departed port, we met our family in the Princess Theater to watch another stage performance - singing and dancing - with elaborate costuming. The little ones just love these shows!

The plan was for Dave and I to grab something to eat, then watch the grandchildren while Lisa and Lenny went to the wine bar for a drink... but by the time we returned from dinner - nearly two hours later - all plans had been abandoned. It was such a magical evening - so warm and the seas so calm - we returned to our cabin to find Lisa and Lenny with a bottle of wine on the balcony and Leo and Lucy fast asleep. The door between our cabin balconies was opened and we enjoyed some wine ourselves as we watched the world go by as we sailed to Glacier Bay. 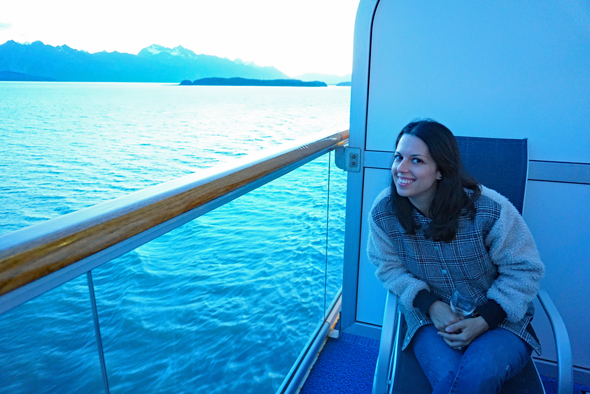 Lisa aboard the Ruby Princess: this photo was taken at 11p.
It gets dark about 11p and the sun rises about 4a.

Your May Also Like:
Skagway, Alaska
White Pass Summit Train
The Ruby Princess

« Whale Watching in Juneau 4th of July in Glacier Bay »