Juneau, Alaska: Dave and I were up super early this morning to listen to the naturalist speak (on the shipboard television service in our room) as he pointed out the sights as we cruised to Juneau along the Inside Passage. Gorgeous glaciers everywhere. Humpbacks. Orcas. Porpoise. Ice bergs, even! We sipped coffee and peered through binoculars to catch anything the naturalist noted on the starboard side (our side of the ship... that's the passenger/right side for all you landlubbers). To reach this port, the Ruby Princess had traveled 1000 miles from Seattle.

A hanging glacier along the Inside Passage

The Ruby Princess was the second cruise ship to dock this morning in Juneau. The Seabourn Sojourn was already in port, and we would all be joined by two Holland America ships and a Celebrity ship. 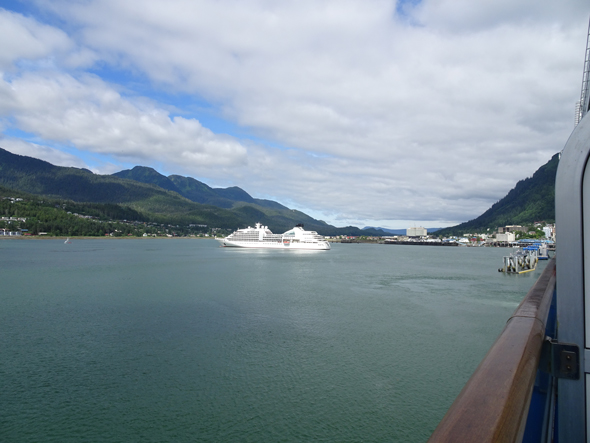 After docking, we all gathered to board a bus that would take us to Auke Bay for our scheduled whale watching trip. The bus ride was about 30 minutes, and our tour guide told us funny tales and bad jokes to amuse us along the way. Juneau has few residents, but is spread out along a large area (32,000 citizens in 3,200 square miles). The Wal-Mart closed, but they have a Costco, Fred Meyer (Kroger) and Safeway.

We boarded a double-decker boat designed specifically for whale-watching by Allen Marine Whale Watching Tours. The boats include glass-enclosed indoor and outdoor observation decks - and the glass was perfectly clean! Best thing? The temperatures climbed to 68 degrees and there was little wind (unless the boat was going full-throttle). 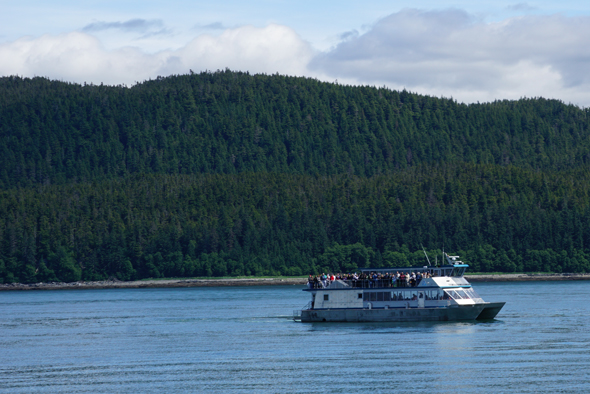 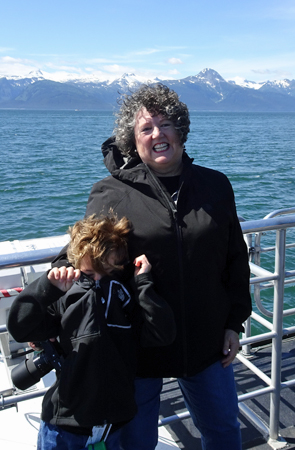 Trying to keep out of the wind

We saw five Humpback Whales today, many sea lions and countless bald eagles. The eagles were EVERYWHERE. We were lucky enough to observe an eagle swoop down to the bay surface to snatch a fish... except the eagle was not lucky enough to catch the fish. 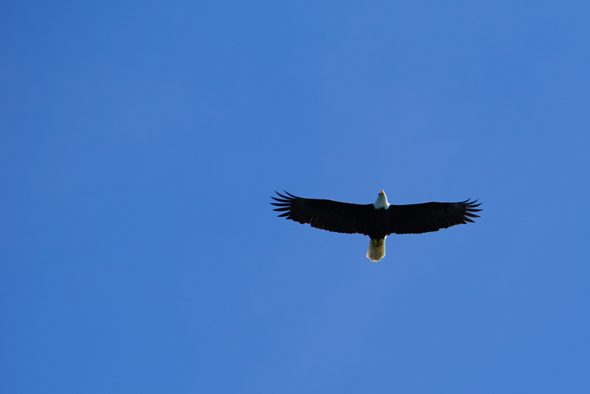 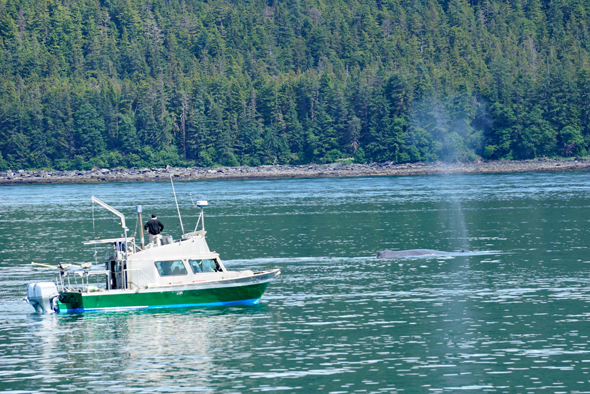 Humpback spouting near a fishing boat 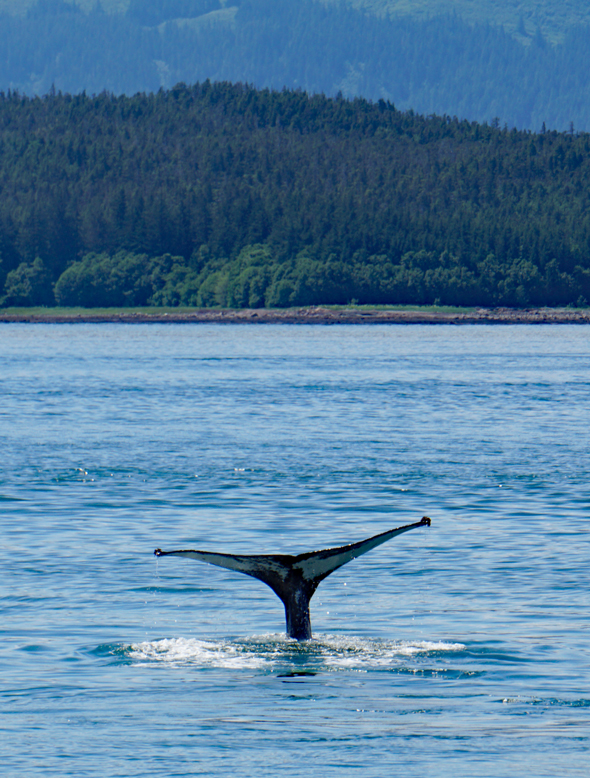 The same whales return to the area year after year and the local naturalists can recognize them by the scars and marking on their flukes (the tails). The same whales are identified in Hawaii during the winter, as the mammals travel back and forth each year from Hawaii to fatten up on salmon in Alaska in the summer months. It is an amazing thing to see a humpback whale spout, rise out of the water, arch her body, then dive into the depths... giving you a little "goodbye" wave of her tail. 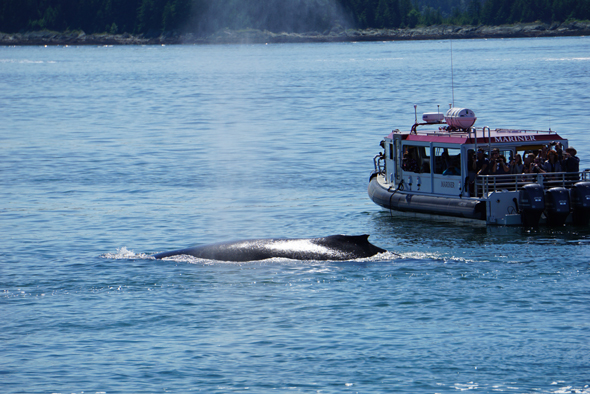 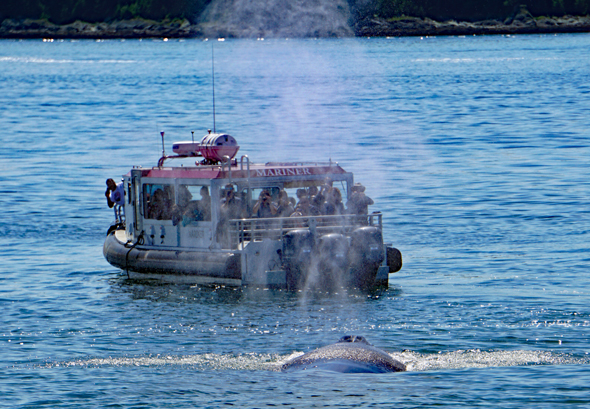 This photo shows the blow-holes on a humpback. Since they are mammals, humpbacks can't really "sleep" or they would drown. Instead, they can put half of their brain to sleep (while they rest) and the other half kicks-in enough to bring them to the surface often enough to catch their breath. Is that amazing or what? 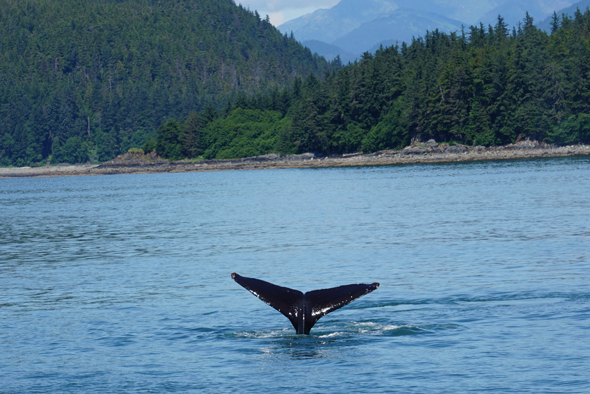 After about three hours on the water, it was time to return to the dock and take the bus back to town. 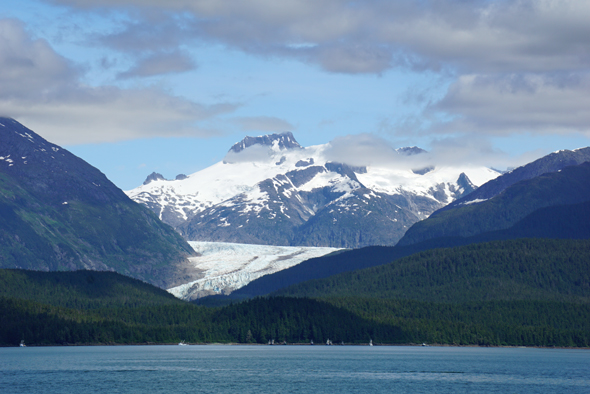 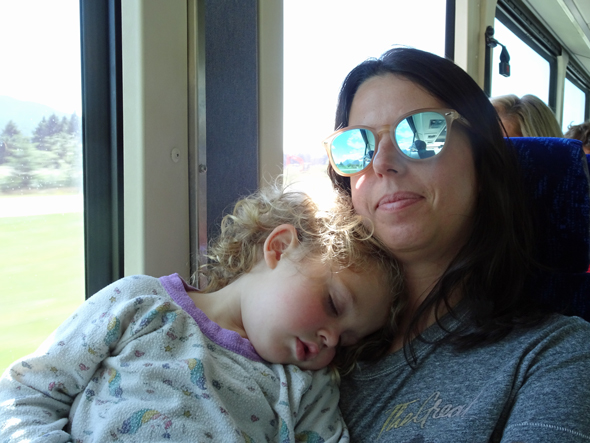 Lucy fell asleep on the bus ride back to the ship.
Lucy could never get over that she was in a moving vehicle without wearing a seat belt.

Many bus riders asked the driver to drop them off in town, instead of taking us back to the ship. He kindly obliged, so our family exited in town, and the driver then continued to the Ruby Princess to deposit the other passengers. Dave and I wanted to visit the State Capitol building (we have a non-serious goal to visit all 50), since we had ridiculously missed the opportunity to visit on our first visit to Juneau. Land-locked, Juneau can only be accessed by boat or plane... unless you want to hike over the top of a mountain. 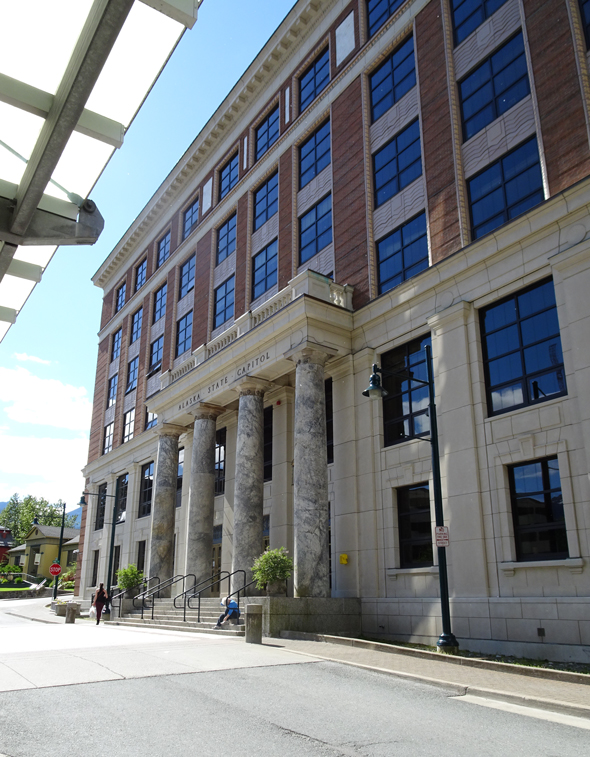 Yes, we have now checked the Alaska State House from our list of capitol buildings to visit, but if this isn't the sorriest excuse for a State House. It looks like an office building. Interesting story about the Alaska State House? It has a Post Office on the third floor... or what should be the third floor. This building originally held the territorial offices, before Alaska became a state in 1959. When it was determined the territorial offices would become the new State Offices, there was a problem with the Post Office on the third floor. According to the US Postal Service, a post office could not be above the second floor in any building. The clever Alaskans solved this problem by making the first floor in the building the "ground" floor, the second floor became the first floor, and the Post Office was hence on the second floor. Done! 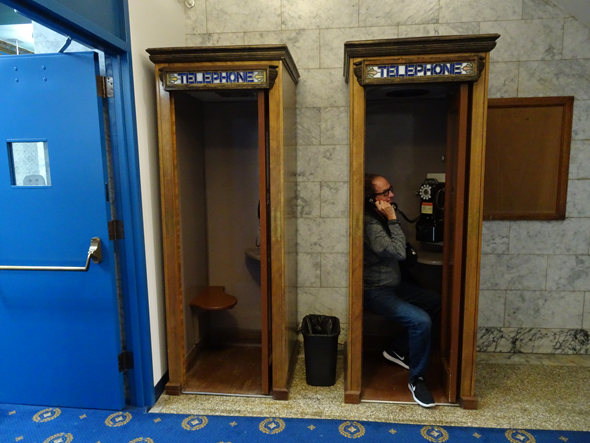 The House and Senate Chambers are ho-hum, but they do have a few really funky phone booths in the stairwell. 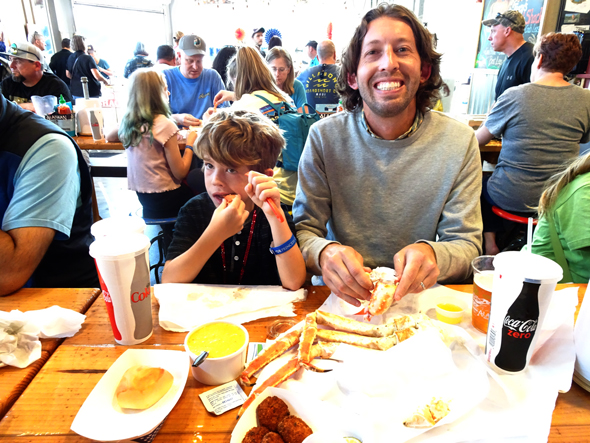 We found Leo and Lenny chomping on crab legs in town. Lisa had taken the melting-down-fast Lucy back to the ship. Dave and I found an outdoor seafood place and I enjoyed a halibut sandwich, while DT had halibut tacos. These meals turned out to be our dinner. We were all tired - a lot of sun and wind on the whale watching trip. 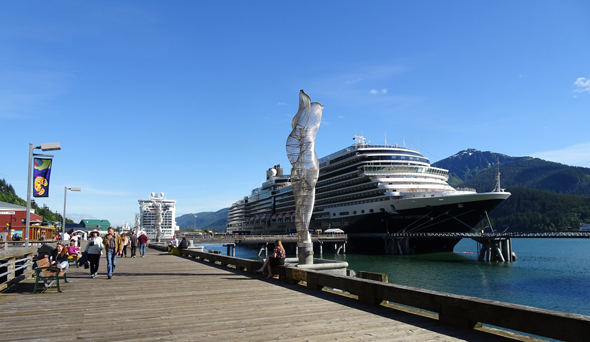 The Nieuw Amsterdam, with the Ruby Princess in the background 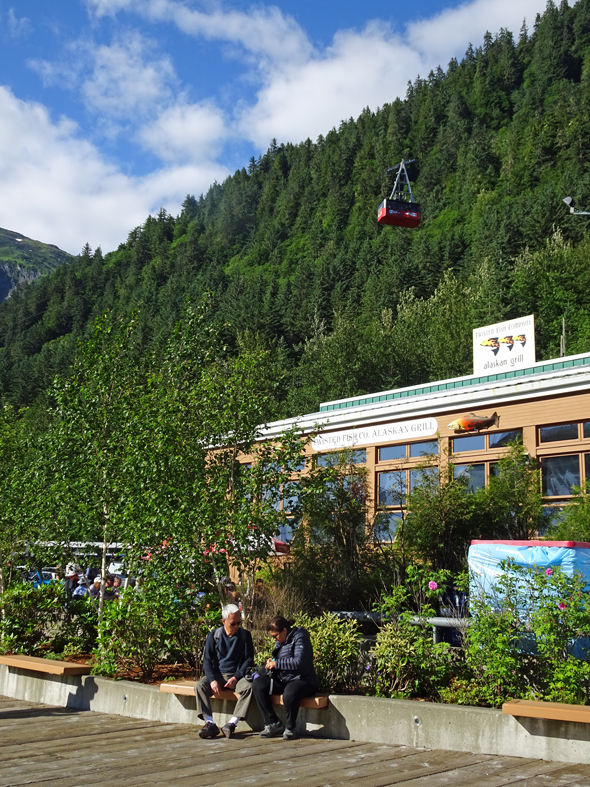 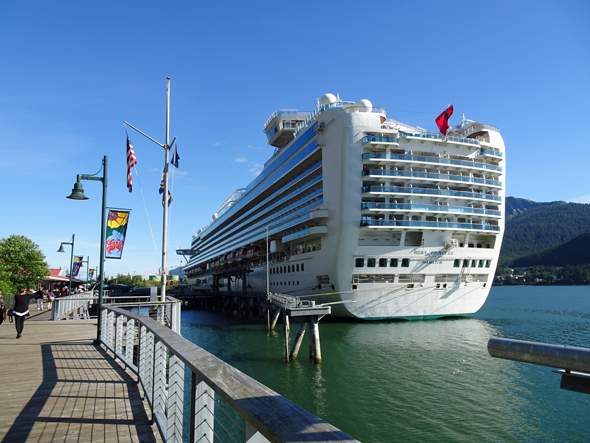 We tried to take the kids to the comedy act, but the performer was more about telling jokes and mental tricks/mind-reading then pulling rabbits from his hat, so the kids were not interested. (The adults thought he was a hoot.) We called it an early night.

Another Big Adventure planned for tomorrow!

Until my next update, I remain, your watched correspondent.

Your May Also Like:
Juneau, Alaska
Alaska State House
The Ruby Princess