Los Angeles, California: A few days ago, Mary asked if Leo ever cries because he always seems so happy in my photos. Of course he cries. Not so much, but the Dear Boy has his moments. I took a photo of Leo with a pathetic pout on his face during a lovely little crying jag and sent it off to Mary in Portland. I think Leo was angry at that moment because I wouldn't let him take the spoon from my hand while I was feeding him. Leo wants to hold his spoon, of course!

I think Leo is adorable even in this crying/angry photo and I would post it here except Leo had Japanese rice biscuits embedded into his chin, face and hair. Not his best look.

The Cutest Baby Ever was in a very cheerful mood today. Lisa wanted to run a few errands and he was content to ride around in his stroller. He was a gem while Lisa and I had a lovely luncheon at a Greek place, accompanied by Leo's Godmother, Angela. 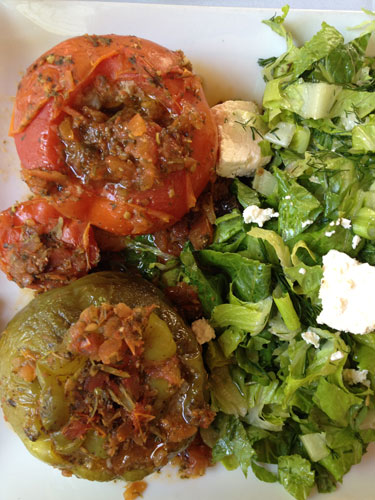 Nothing like meeting Our Greek Goddess, Angela, at a Greek restaurant for lunch! I had a bell pepper and a tomato stuffed with rice and meat in a savory tomato sauce and a salad. Delicious. Leo was fascinated with our server, watched his every move and smiled like crazy every time the young man came anywhere near our table. Huge flirt.

Leo fell asleep on the way home and I stayed with him in the shady driveway for a few minutes until he woke from his nap. As Lisa's yaya* (in Manila 30 years ago) always said: never wake a sleeping baby. 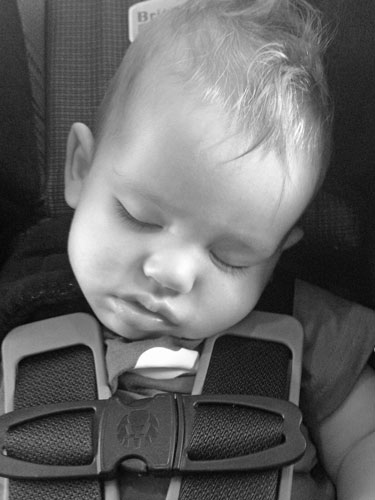 Words to live by

After a nice nap scrunched up in his car seat Leo was reenergized and ready to take on his Bubbe the world.

Leo and I played in the back garden. Leo even plucked an orange from the tree. Boy, was he surprised. He loves to feel the grass under his feet and I am still fascinated by the adorable dimples on his hands. 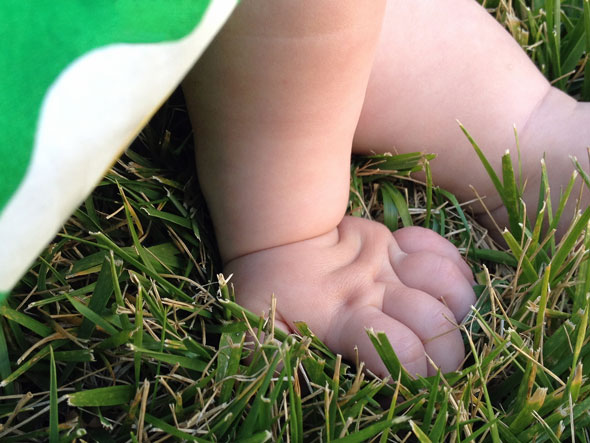 1. Leo has a much better hip-swivel than Elvis.

2. Yes, My Kosher Kid is wearing an eggs and bacon tee shirt.

4. That smile melts me. Every time.

Until my next update, I remain, your Felliniesque correspondent.