Las Vegas, Nevada:  Here is a photo of our bus as we were leaving Death Valley yesterday morning: 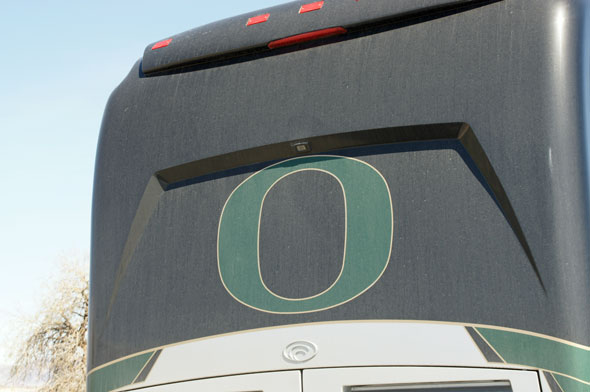 Here is a photo of our bus after Red Rock Mobile RV Wash came by this morning and lovingly washed away 1000 miles of grime: 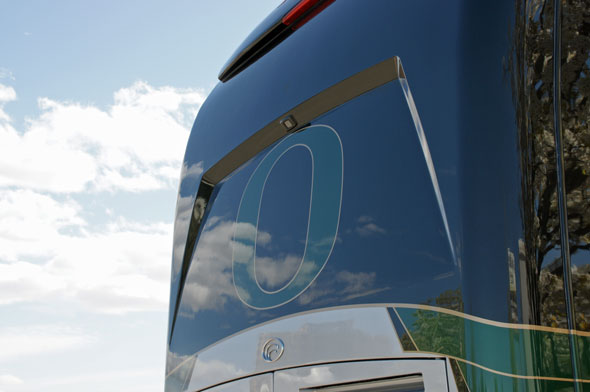 It was super windy in Las Vegas this morning. Happy I had a day-off from running, though My Driver managed to pound-out four miles by keeping his head down and complaining bitterly. I went out for a pedicure (heavenly) and then brought back more of those glorious tacos from Roberto's for our lunch. 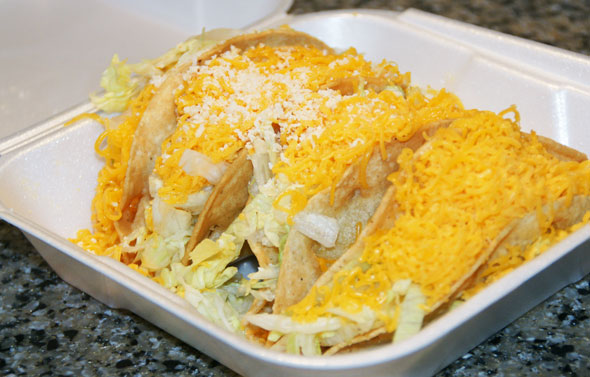 By the time we finished our lunch, the RV washing dude had finished so we went out to inspect his work. 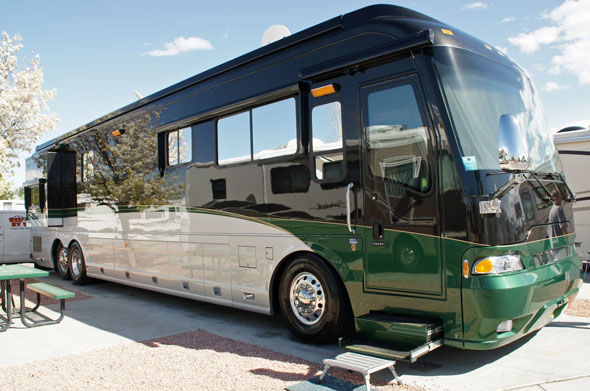 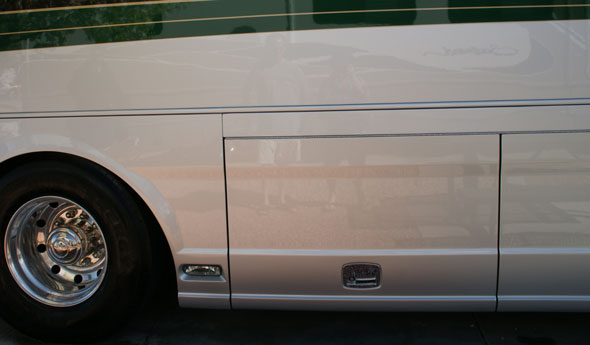 We can see ourselves in the shine! Can you see my pretty toes?

We watched the NCAA Indoor Track & Field Championships live (on the internet) from Fayetteville, Arkansas. Long-time readers will recall our star decathlete, Ashton Eaton (from Bend, Oregon) from many other blog posts and photos. Ashton is a senior at the University of Oregon and also represented the US in the World Championships in Berlin, where he finished 18th.

AUGUST 2009: Ashton flashed us the "O" from the track in Berlin 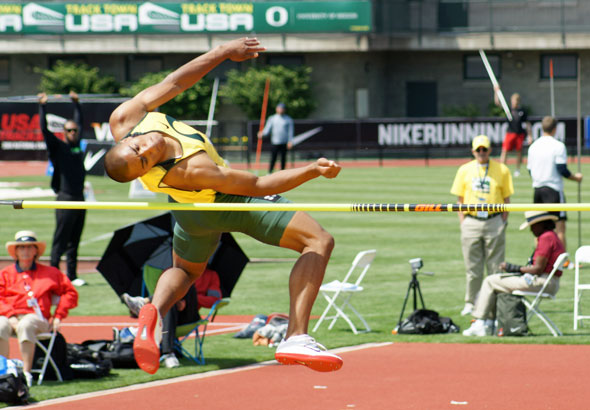 JUNE 2009: Here is a photo I took of Ashton Eaton, competing in Eugene

Today at the NCAA Indoor Track & Field Championships in Arkansas, Duck Ashton Eaton set a WORLD RECORD in the Heptathlon. Yep. A senior in college is the world record holder in the Hep. Plus, Ashton is a native Oregonian. Could it get any better? Yes it can. In some freaky ironic coincidence, the World Indoor Track & Field Championships are being held this weekend in Qatar. Ashton beat the professionals by a mile. Congratulations to Ashton.

But it gets even better! Congratulations to the Oregon Women's team - they won the national indoor title and the men's team tied for second place with Texas A&M, behind Florida. GO DUCKS!

A great day for the green & yellow.

Entertainment for tonight was a celebratory dinner at one of our favorite restaurants in Las Vegas - Todd English's Olives at the Bellagio Hotel  & (conveniently enough) Casino. We toasted Ashton and the Ducks. We ordered appetizers. I had a salad and DT had a calamari-garbanzo thing. His appetizer was so large (and so delicious) he didn't want to order an entree... so he didn't, he ordered one of the "flatbread" (I call it pizza) options. I ordered a ribeye steak and had four bites. It was massive. Too much food.

We have a ton of leftovers in our fridge now.

So what would be the chances the orthodontist son of my childhood orthodontist would be seated next to us at Olives tonight? You are right - 100%. The couple next to us asked where we were from and we subsequently learned they were from my home town in Oregon... and from there my smile was checked-out and the rest is history. The son was in Las Vegas on some sort of orthodontic convention/speech event and he made his wife take a photo of my smile to show his Dad... evidence that 40 years later, his work still held.

After dinner we had a stroll through the conservatory inside the Bellagio Hotel, which is decorated seasonally in a different theme. The spring theme this year seems to be "gigantic bugs", as the entire garden makes you feel you have been shrunken down smaller than an ant. Clever. Disturbing. Entertaining. 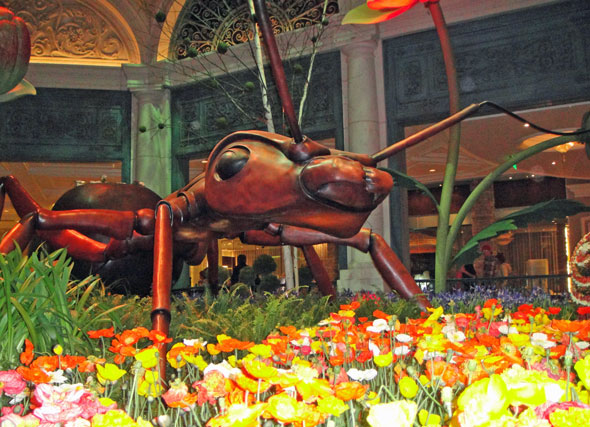 Bugs larger than a C-Class 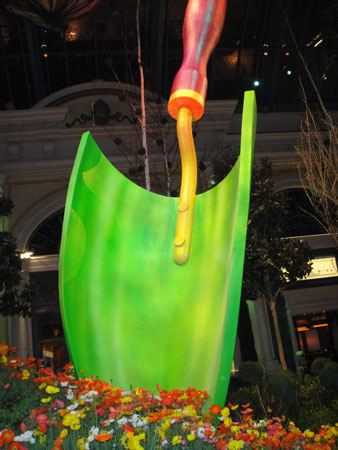 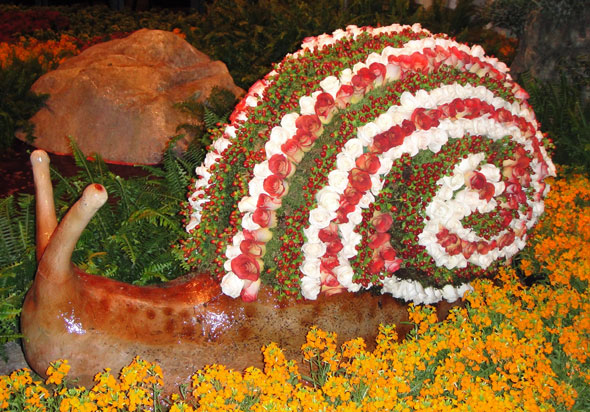 This snail was about the same size as my Honda and was covered with fresh flowers! 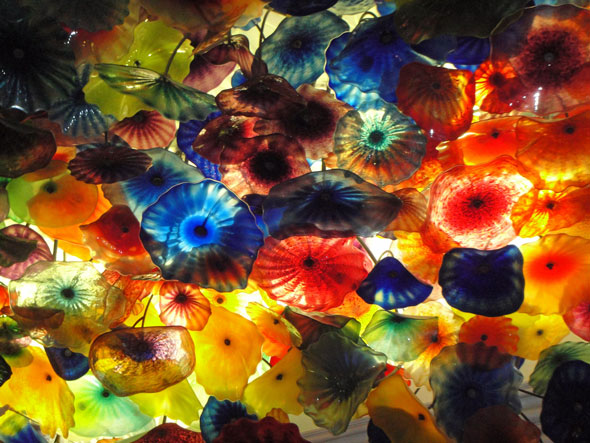 And, of course, the beautiful ceiling of the lobby of the hotel -
hundreds of glass flowers by Dale Chihuly.

Tomorrow we are going to "waste away in Margaritaville" with several special guests. Until my next update, I remain, your PROUD DUCK correspondent.

RV Park:  Oasis Las Vegas RV Resort. 30/50-amp, full hook-up paved pull-through. Cable. Wifi is $5.95 for 24-hours - ouch. Great location and full-service resort with pool, hot tub, nice bath and laundry facilities, mini golf and bocce ball. Shuttle service to the strip. Close to restaurants and shopping. Also next to I-15 and under the flight path of the Las Vegas airport. We are paying a ridiculous $50 for our "premium" site.