Sacramento, California:  It is amazing the difference between 107 degrees and 92 degrees! It was still hot and miserable... just less hot and miserable. We were over to the track just after noon to catch the races. A few heats, but mostly finals today. Competitors have to finish 1st, 2nd or third to make the US team bound for London in August. You must be amongst the top three runners, jumpers or throwers. 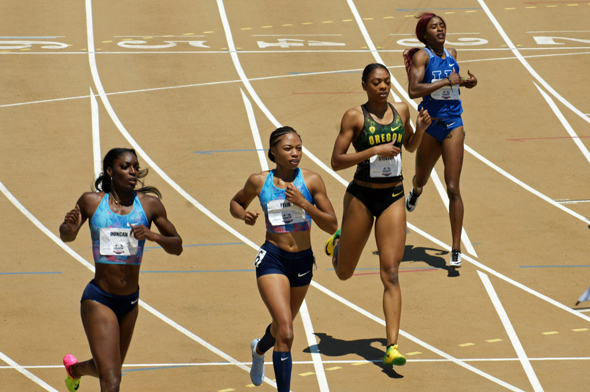 SEMI-FINAL: Duck Deajah Stevens claims third in 200m semi-final.
Allyson Felix won the heat, but mysteriously did not show-up to run in the final later. 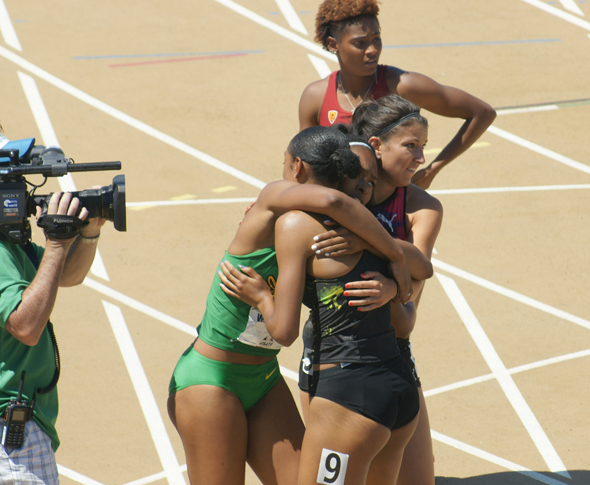 Oregon long jumper, Damarcus Simpson made the US team with a third place finish. Amazingly enough, Simpson did not even compete the the NCAA Championships two weeks ago (because he fouled on all three attempts in the regional meet to qualify to jump in the NCAAs). Now he's going to London! 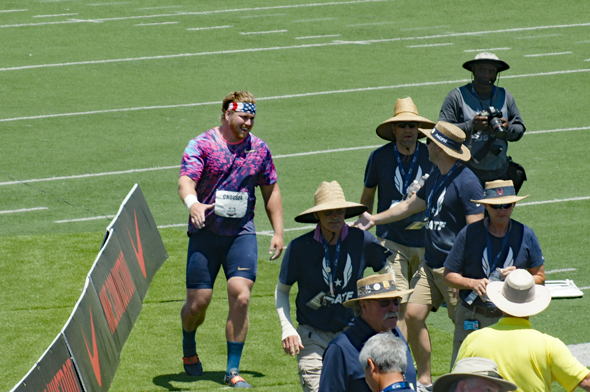 Ryan Crouser (an Oregonian who attended the University of Texas) won the shot put today with a 22.65m (over 74 feet) toss. This one throw was the fourth longest shot put in the history of the entire whole wide world. Great time to peak, Ryan! Crouser will represent the US in London, along with Joe Kovacs and Ryan Whiting. 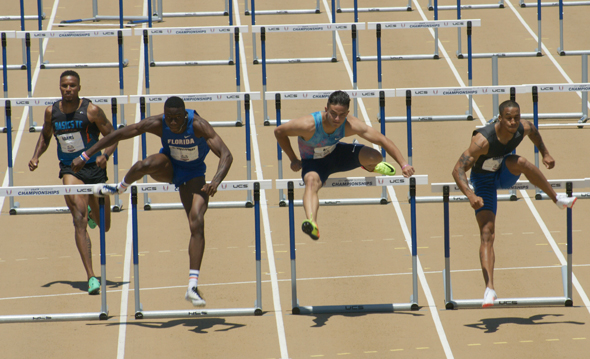 Hurdle phenom, University of Oregon alum (he graduated last week), Devon Allen, finished 2nd in his heat to advance to the final in the 110m hurdles - the last race of the day. Mr. Allen made the US team by finishing 3rd in the final (13.34), behind Aleec Harris (13.24) and the amazing Aries Merritt (13.31). Long-time favorite, David Oliver, failed to make the team. 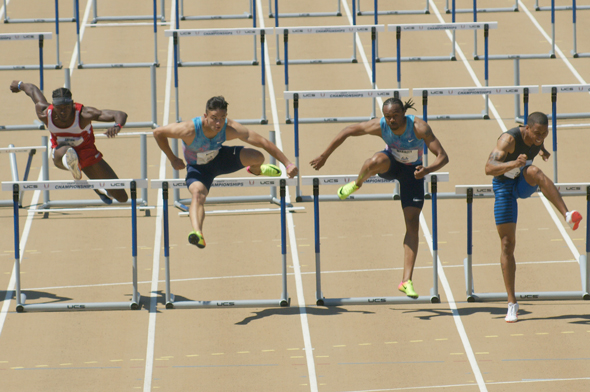 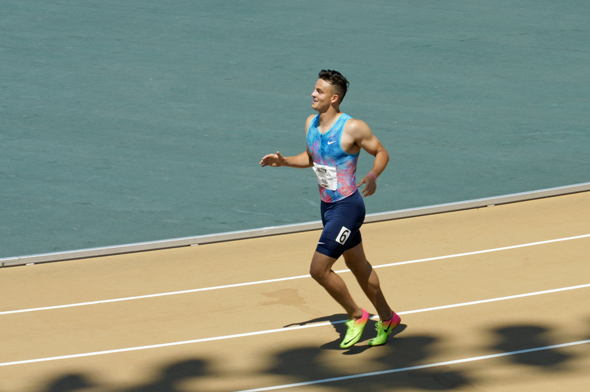 A very happy Devon Allen after the race 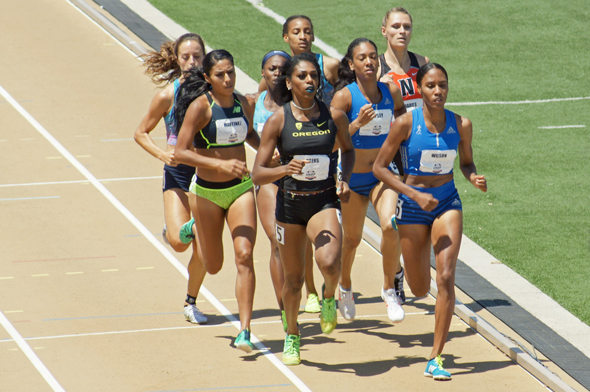 Meanwhile... in the women's 800m final, Duck Raevyn Rogers took the lead in the first lap, but finished fourth and will not be going to London. We were so disappointed, but maybe the poor girl was just too exhausted after her amazing relay two weeks ago to win the 4x400m relay and capture the NCAA team title? Ex-Duck, Laura Roesler, finished 7th. No feathered friends in the 800m in London. 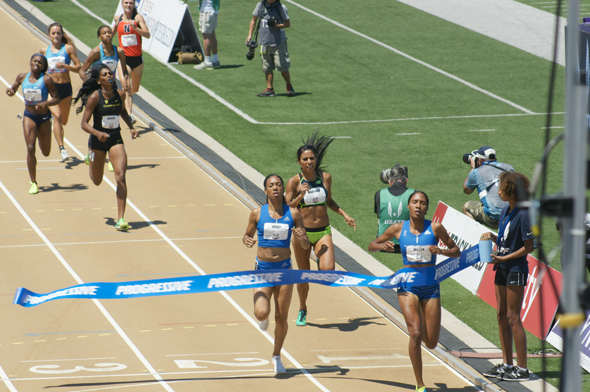 Though Brother Steve joined us at the track the past three days, we had not seen Gina since dinner Wednesday night. The races ended at 3p, so we made plans to meet Gina and Steve for dinner. They live far north-east of Sacramento, so we met them half-way in Roseville - at an upscale shopping/dining area called The Fountains. We had dinner at a fantastic Mexican restaurant, Zocalo. 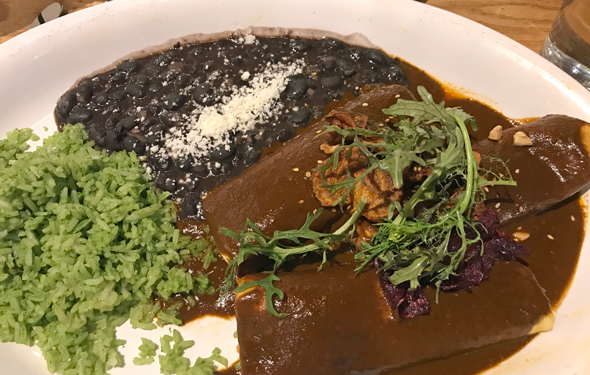 I had the chicken enchiladas in a mole sauce. Super yummy - especially with their famous cilantro rice and black beans. We learned Zocalo will soon open a restaurant near the university - so very close to this RV park. Perfect. I can't wait to dine at Zocalo again.

After dinner, with our bellies full, we took a short walk around The Fountains complex. Most of the shops were closed or closing, but we went into the famed San Francisco bakery, Boudin, to purchase a loaf of sourdough bread. They had two loaves left, so I asked for one. After the bread was sliced and bagged, it was determined the cash register had already been closed-out for the day. Hmmm. I suggested they simply give me a loaf of bread. They agreed. Score! Then I asked if they had a tip jar and donated nearly the full-price of the loaf for the gesture. Karma!

(I'm still calling it my "free" loaf of bread.)

Until my next update, I remain, your proud, happy, hot, sweaty correspondent.

RECAP:
9 Ducks made the US World Championship team

NOTES: There is also a great possibility of English Gardner making the trip to be used on the relay teams. Plus, this is only the list of American Ducks participating in the championships. The University of Oregon has several foreign students on the team, certainly a few will be competing in London.

*competed for Oregon, but now a professional athlete