We arrived home this morning, a bit confused due to the odd Friday football game. I thought it was Sunday. All day.

Another great - and safe - trip. We didn't have the greatest weather, but we enjoyed a perfectly lovely Thanksgiving celebration with DT's family and Little Leo was the starring attraction. The entire Taylor Clan has now met the next generation and Leo is blessed to have so many people to love him.

The Magna Peregrinus is in our driveway... which means practically nothing else (except a Smart Car and a tricycle) will now fit in our driveway... but in between our appointments and errands this week, we will be loading the motorhome for several months away. We will head south on December 11th.

Since Thanksgiving, Lisa and Lenny have had a miserable week in Los Angeles. Not sure if you have heard, but El Lay received hurricane-force winds. The kids lost their power for nearly four days. The first night was okay, as it wasn't very cold, but as the temperatures dipped into the 50's, the new parents checked into a local hotel (that  had electricity) and waited for their neighbor to call when the power returned.

He didn't call until this morning! 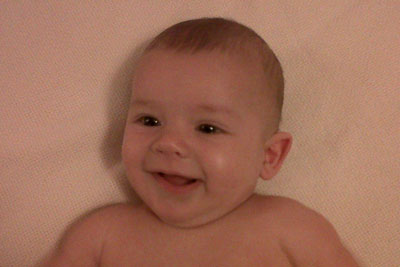 So the Cutest Baby in the Entire World spent a few days in nice hotel. Just like his Mommy, who traveled all over the world with us an an infant/toddler. By age 2½, Lisa could order ice cream via room service anytime I was in the bathroom longer than 4 seconds. Unbeknownst to me. Suddenly there would be a knock at our hotel room door (she most-often pulled this trick on us in Bangkok, Thailand), the ice cream was presented, Lisa was all smiles and I was fumbling for tip money. No one ever accused Lisa of being slow.

Leo, I charge you to pay us back big-time in the future! (Vanilla, with chocolate sauce.) 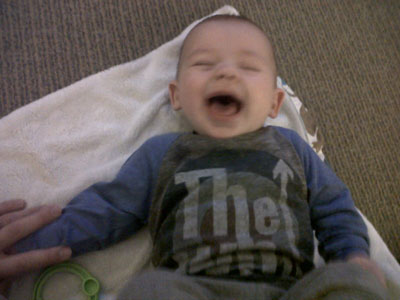 Okay, Bubbe, you can count on me!

Our Little Grandson was enjoying his hotel time and looked so handsome in his new "The Who" tee shirt (that I found for him a few weeks ago). Stylin'!

Leo is growing out of his clothing so fast. At four months, Leo is a very tall baby. In fact, I am less than 3 feet taller than my 4-month-old grandson. (True, I am quite short - but that realisation kinda freaked me out.) 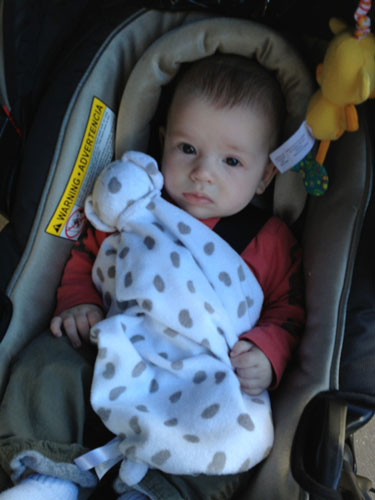 This morning, Leo (and his parents) had brunch with his Godmother, Angela. Angela sent us this photo (above) of the handsome fellow in a pensive mood. I'm pretty sure after 4 days at Great-Grandma's and 3 days in a hotel, the poor guy was wondering where he lives! 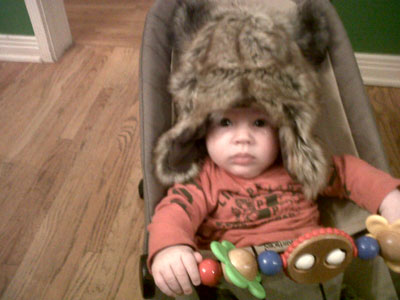 Not sure how this raccoon died on Leo's head, but isn't that just adorable? (Lisa reports this a bear on his head and it is via Baby Gap.)

If you weren't paying attention, Wisconsin beat Michigan State tonight and will now face the Oregon Ducks in the Rose Bowl, 2 January 2012 in Pasadena.  Goodness, that is so far into the future. I hope I don't forget.

Until my next update, I remain, your Oregon correspondent.
« 49-31: Rose Bowl Bound Lasagna Soup »