Eugene, Oregon: I didn't update yesterday because I was too busy enjoying the sunshine! Yes, Mother Nature can read a calendar! She blessed Portland with glorious 82° sunshine on the First Day of Summer.

Of course, Mother Nature has returned to her usual soggy program today. Clouds. 60-ish. No matter - we will take anything we can get at this point. (This point = danged-near July.) 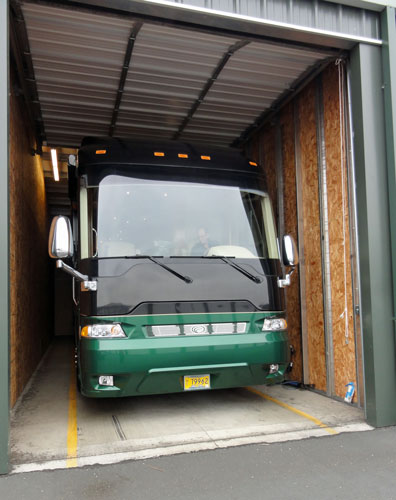 We are back in the bus! Yeah! Not exactly a RVing Adventure... but we will be using the Magna Peregrinus as a Bed & Breakfast for a week in Eugene. Guess what? We are here for a track meet! The USATF Championships are being held at Historic Hayward Field this week. This is not a college meet. This is for the Big Boys & Girls. Top three finishers in each event will represent the USA at the World Track & Field Championships this August which we will not be attending because of our impending Grandparenthoodin Korea. 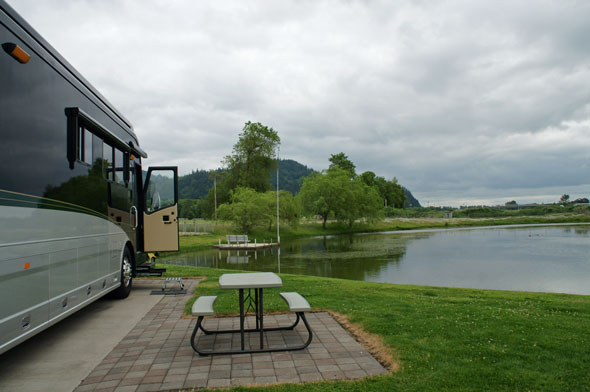 We totally lucked-out and snagged one of the best campsites at Premier RV Resort (I-5, exit 199). We have a head-in full-service site with 50 amp. Our view looks out over the large pond/small lake. 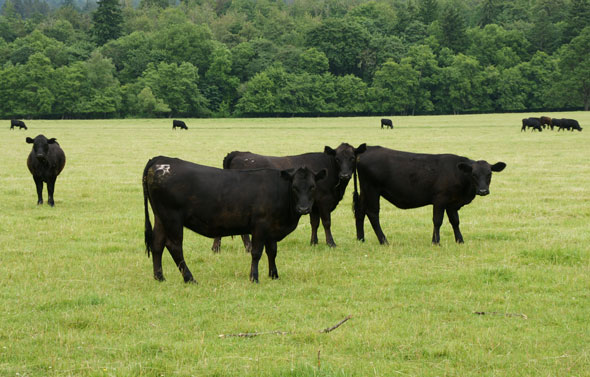 We also have a view of a pretty green pasture filled with curious cows.

However, I'm not sure what is going on at this peaceful RV resort. There is a lady here with eleven kids: 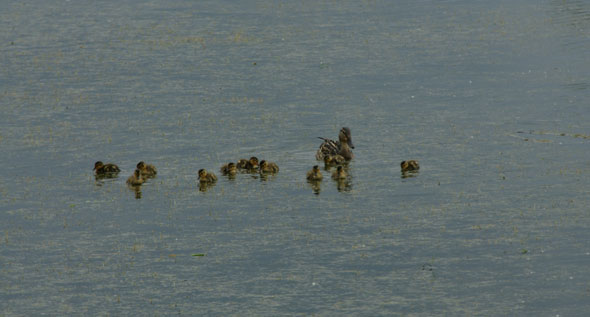 The track meet starts tomorrow and goes through Sunday. The meet will be televised Friday-Sunday on NBC, Universal and ESPN/2. Check your local listings if you are in any way interested... which I hope you are, because track & field is simply the most interesting sport on this planet.

Because Historic Hayward Field, on the campus of the University of Oregon, is hosting the National Championships, the entire town is celebrating and recognizing the athletes and the sport. The University's Jordan Schnitzer Art Museum opened their "Track Town USA" photo exhibit tonight. The exhibit features a selection of photos from the recent "coffee table" book, Track Town, USA: Hayward Field: America's Crown Jewel of Track and Field, showcasing the history of the sport at the University of Oregon. 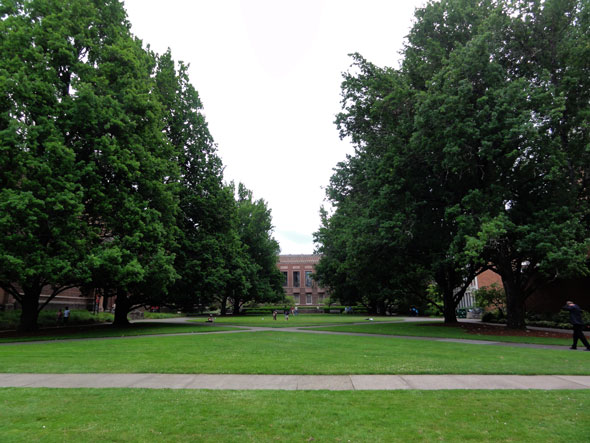 DT and I were honored to be invited to the opening of the photo exhibit. We had a little stroll through campus to reach the art museum. The University of Oregon has a beautiful campus and this view is virtually unchanged since I attended classes in the 1970's. This constant spring rain only makes the view more lush. And greener. 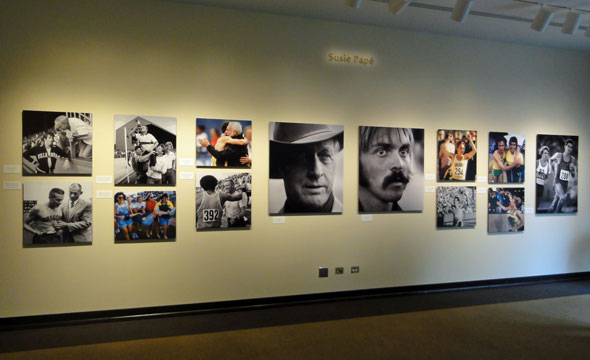 If you are a track fan, I know chills just ran down your spine. 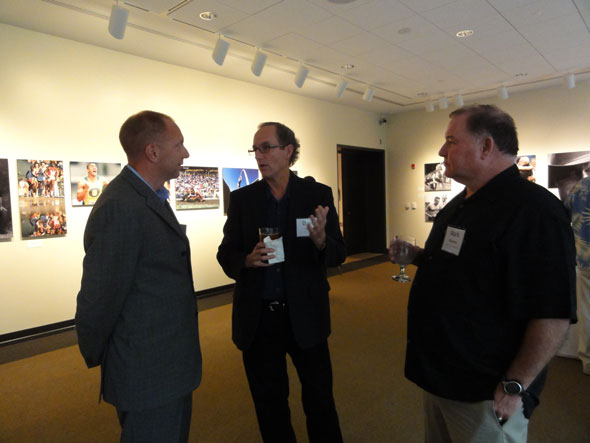 Because DT is helping to organize the 2012 Olympic Trials we are so popular, we were also asked to attend the one-year-out Kick-Off Party in downtown Eugene tonight. The event was held as a "street fair" with booths set up so attendees (kids) could attempt the high jump, long jump, etc. Each athletic endeavor attempted earned a star and after you earned a certain number of stars, you could get a prize - a tee shirt or hat. There was live music, food booths, a raffle and all sorts of fun. Price of entry was a can of food for the local food bank! 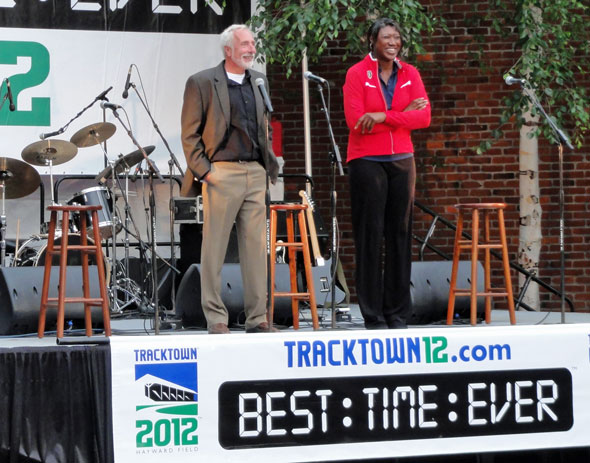 Oregon head track coach, Vin Lananna has been chosen the men's coach for the 2011 World Track & Field Championships in Korea! The women's coach is Connie Price-Smith. Price-Smith is the head coach at Southern Illinois and is a four-time Olympic team member (discus). 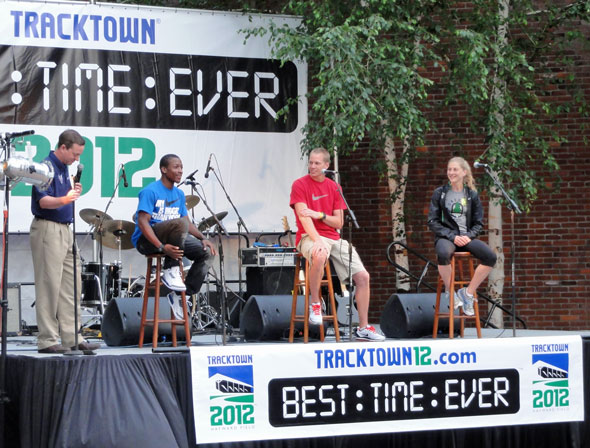 Three professional athletes (seated on stools) competing this week were interviewed on-stage during the festivities. (Left) Mike Rodgers is expected to do well in the 100m, (center) 2008 Olympic Trials high jump champion Jesse Williams now trains in Eugene and (right) our friend Lauren Fleshman will race in the 5000m. It is going to be a great championships.

Listening to the athletes tonight totally pumped-me-up for my Huge Three Mile run jog in the morning!

Until my next update, I remain, your Track Town correspondent.
« Homemade Ricotta Practically Perfect »