Rome, Italy: We set the alarm to wake at 7a so we could watch Ashton Eaton in the decathlon from Moscow. Luckily this activity can coincide easily with still-sleeping with one eye open. After a little breakfast (included in our room rate), we hit the streets of Rome - camera and map in hand.

We have been to Rome before, so didn't feel it necessary to again tour the Coliseum or Vatican or Whatever. But on our previous trip, a tour of the Great Synagogue of Rome was cancelled due to a funeral, so we were hoping the Hebrews of Rome were in better health this week. We left the hotel before ten o'clock and meandered through the ruins to reach the Temple. The temperatures were in the low 90s. It was hot! 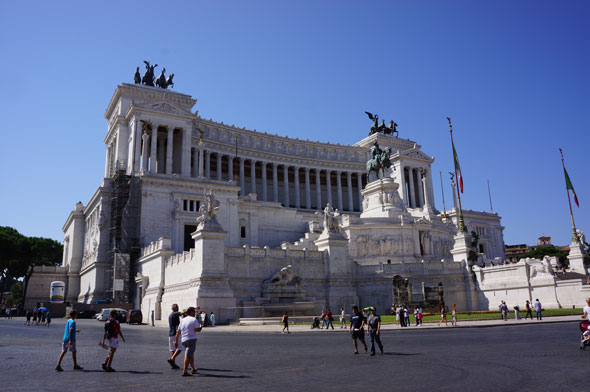 Monument to Vittorio Emanuele II (Altar of the Fatherland). Emanuele was the first King of unified Italy. The monument is also the site of the Tomb of the Unknown Soldier and a museum with Italian military uniforms. We spent about an hour touring through this monument. 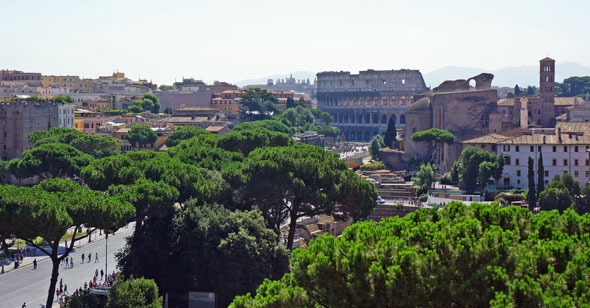 The top of the monument offers great views to the Coliseum... 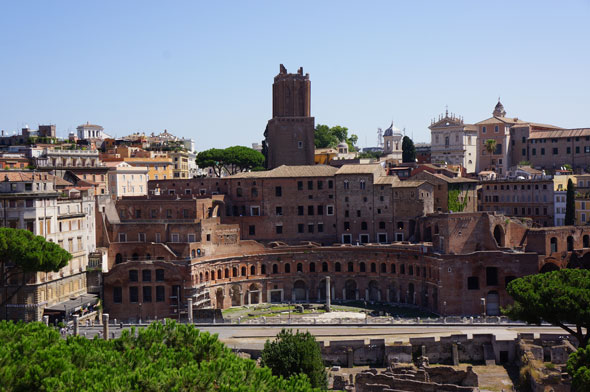 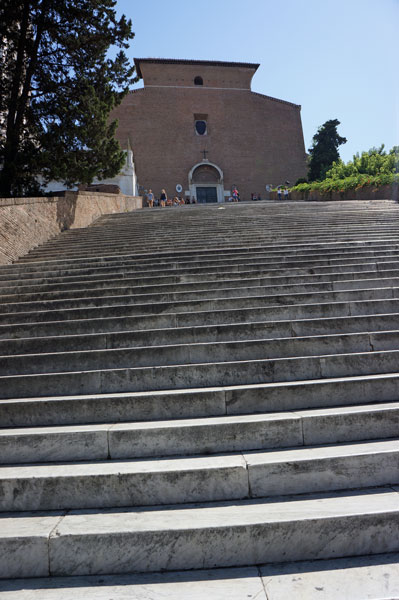 The "back staircase" from the monument 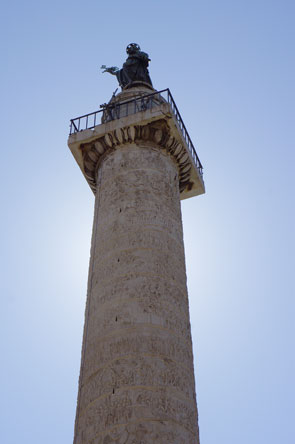 More scenes from Rome this morning

Our walk continued past the ruins of the Theatre of Marcellus: 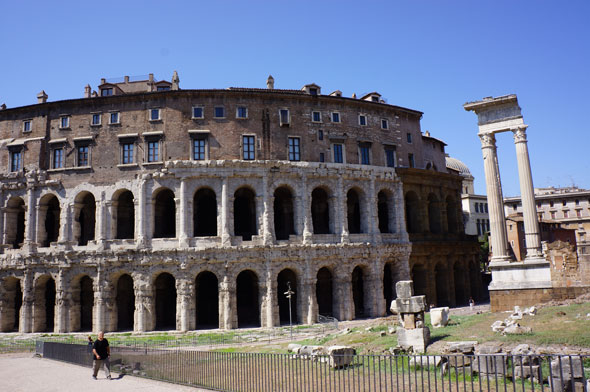 And finally to the shores of the Tiber River. 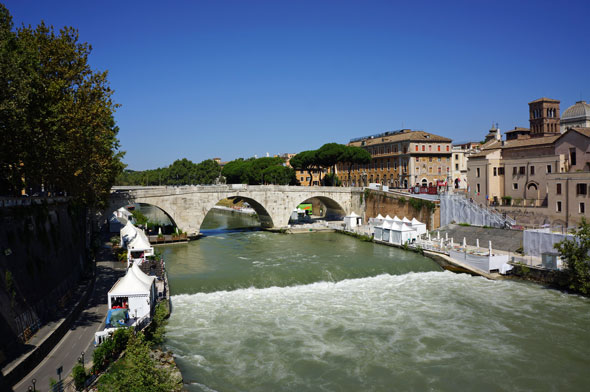 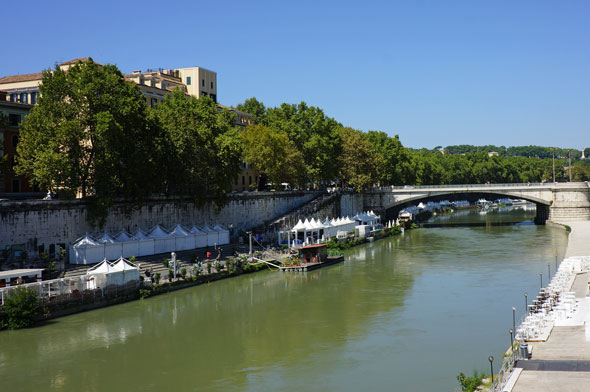 In the summer, restaurants line the shores of the river

Unfortunately for My Readers, photography is forbidden on the grounds of the Great Synagogue of Rome and, sadly, security is very tight. 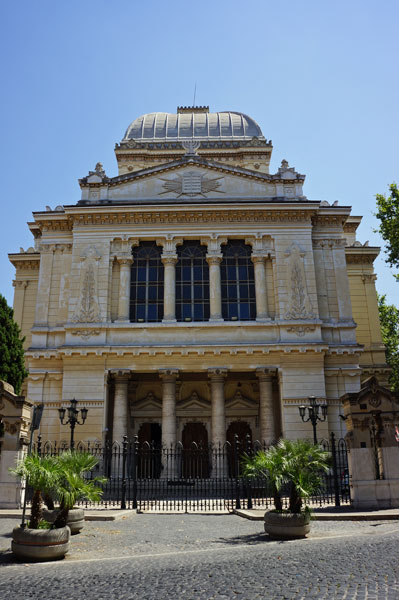 I was standing across the street from the temple, next to three
Catholic Priests (deep in discussion) when I took this photo.

Dave and I first looked at the displays at the Jewish Museum of Rome (in the basement of the temple). The museum has extensive textiles, documents, household items and silver produced in Rome in the 17th & 18th centuries - all collected from 2000 years of Jewish life in Rome - one of the oldest Jewish communities in the world.

We then joined the tour of the smaller Sephardic temple (also in the basement) and then were able to enter the synagogue. The sanctuary is amazing, huge and elegant. Click here to see photos of the interior of the synagogue.

Time to start back to our hotel and time for lunch! We walked through the Roman Ghetto area behind the Great Synagogue of Rome, and started looking for promising restaurants. We decided to try Elle Effe and were quite happy with our salads - and the restaurant let me tap into their free wifi so we could keep track of Ashton pole vaulting in Moscow via my phone. 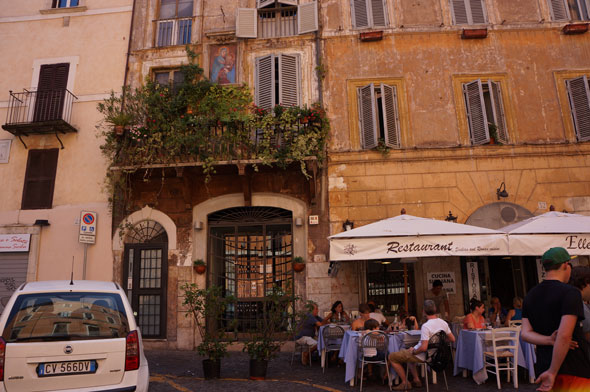 We had an outdoor table 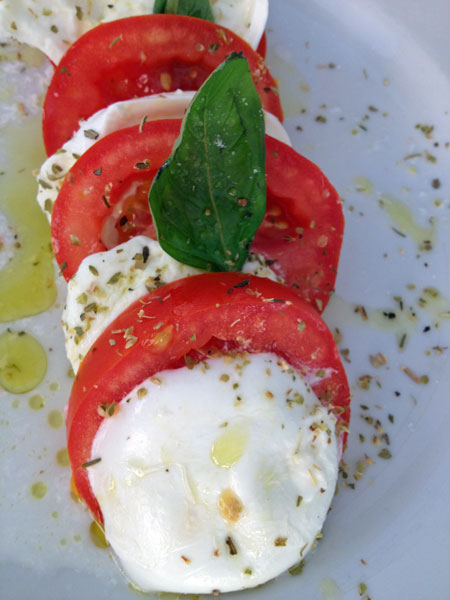 We eat Salad Caprese all the time - but it always tastes better in Italy! 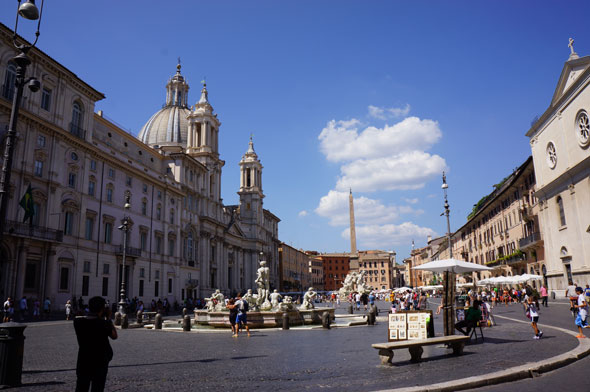 Meandering back to our hotel, we walked through Piazza Navona. 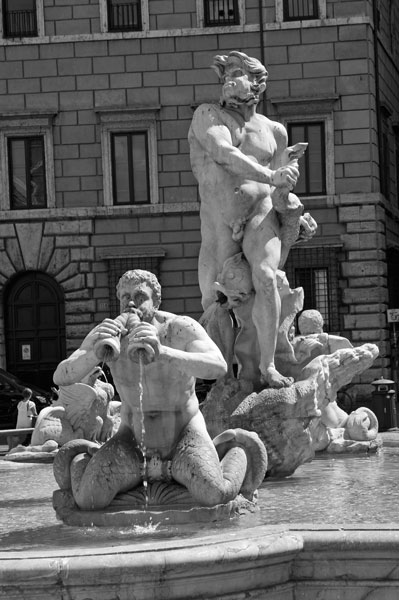 Though I neglected to toss a coin into the beautiful Trevi Fountain our last time in Rome, I did, indeed, return. 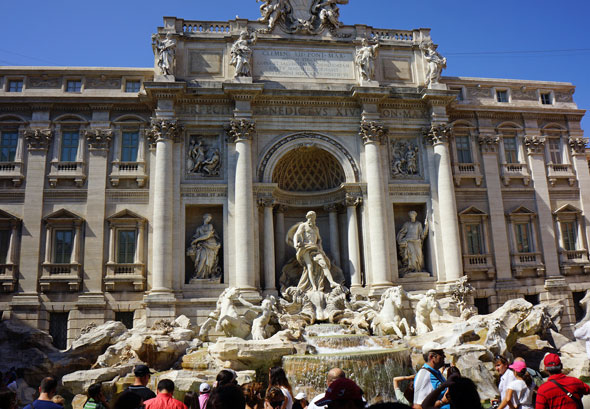 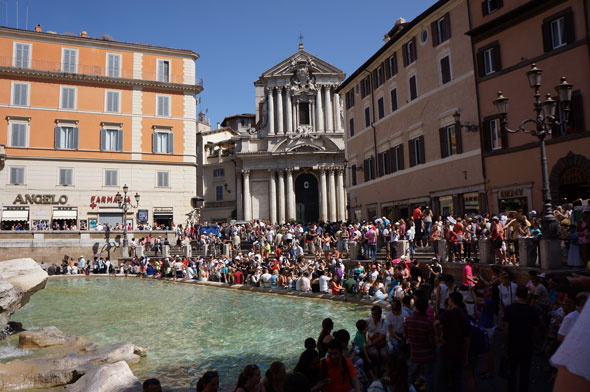 The Trevi Fountain must be the most-crowded fountain on the planet.

When we returned to our hotel my pedometer read nearly 14,000 steps - over 6 miles. We watched the IAAF World Championships on EuroSport television (in German) while we relaxed in our air conditioned room. Six miles wasn't enough for My Driver though; Dave ran on the treadmill in the hotel fitness center. (I have neglected to report that I am not jogging while in Europe. I will take a break from jogging, but will certainly still make my 10,000 step-a-day goal.)

We took a 20 minute taxi ride north to a very popular restaurant for dinner. Every food writer on the planet has been giving Casare al Casaletto raves - especially for their deep-fried beef meatballs. We really enjoyed the meatballs and the fried gnocchi, our meals and wine were delicious... but I wonder if this restaurant might best be enjoyed if you are in the neighborhood? DT and I figure there must be more than a few restaurants closer to our hotel with similarly delicious foods.

So where nothing could go right yesterday, everything went well today. Ashton Eaton won gold in Moscow, retaining his title of The World's Greatest Athlete (as if there was a doubt), we had a lovely day in the Eternal City, three good meals, and video-chatted with the Cutest Boy Ever.

ONE ODD THING I NOTICED TODAY: Kobe Bryant is on a local television advertisement for Turkish Airways.

Until my next update, I remain, your Roman correspondent.