Tubac, Arizona: We continue wandering around the desert. Amazing things are to be found. We really don't have to look very hard - there are stacks of tourist brochures everywhere. Moses should have had it so good. Today we went deep underground to see a missile designed to destroy Moscow.

But first - a margarita! 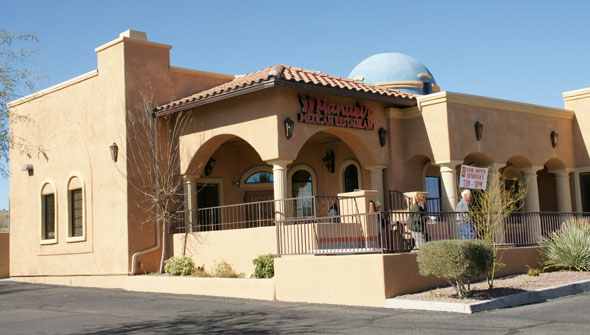 Today's margarita was just okay - nothing over the top. It was a Cadillac margarita from Manuel's Restaurant (just a few blocks from the Titan Missile Museum), 121 West Duval Rd, Green Valley, Arizona - 520.648.6068. 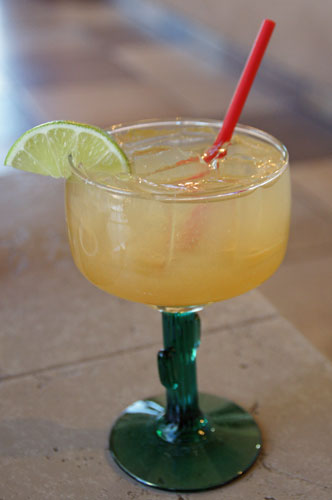 My late-lunch/early dinner margarita consumption continues. I am doing it for you, Dear Swilling Readers. I am sacrificing so you will know where to enjoy the best thirst-quenching beverage in the desert. Manuel's gets extra points for a cute cactus glass, a very clean restaurant and great servers. 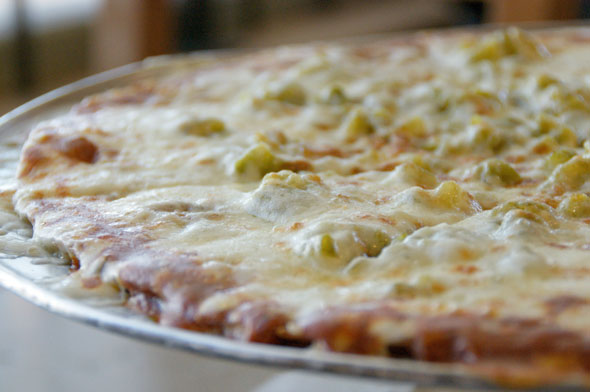 Since enjoying a Cheese Crisp at Wisdom's the other day, we decided to try one at Manuel's. The two were very different - Manuel's puts down a thin layer of enchilada sauce over the tortilla (using it like pizza sauce) and then tops the "crust" with Monterey Jack cheese and chilies. (It was good, but we preferred the Cheese Crisp at Wisdom's because they use an interesting variety of cheeses and the flavor is deeper.) Anyway, since we are now experienced Cheese Crisp Aficionados - we knew this inexpensive appetizer would fill us up and we ordered nothing else to eat. Which also meant our lunch/dinner tab was only $15!

Okay, enough about that gut bomb lunch - on to the bomb! 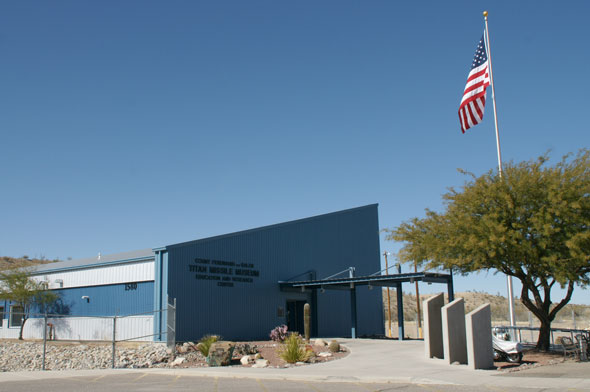 I have previously written that at one time I had no interest in the space program. Planes. Rockets. Bombs. None of this stuff held my interest. That said, years ago we listened to John Glenn: A Memoir

(his self-read autobiography via books on CD) while RVing on the east coast and I found it a most fascinating tale. Then we visited Cape Canaveral in Florida. I became not so much interested in stuff going up in the air or missiles carrying bombs - but became interested in all the history surrounding these military maneuvers and the Cold War. (Apparently I lived through the entire Cold War, but was pretty-much busy playing with dolls during the good parts.)

Listen to Jimmy Buffett sing Waiting for the Next Explosion Safe - hosted by RVGoddess.com

The US Air Force had many Titan II Missile sites in America. Each missile was housed completely underground in concrete and steel silos. The missiles have been destroyed (or used to launch weather satellites) and the underground silos have been filled with concrete. The government has left just one site intact as a museum - and of course, this missile no longer has a nuclear warhead! 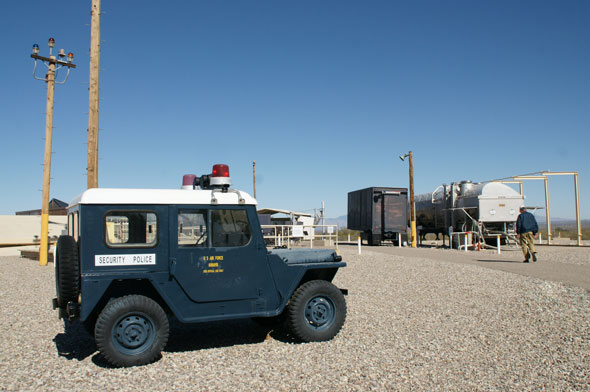 Above the silo So, continuing with our underground tour theme (Copper Queen Mine and Kartchner Caverns) we took a guided tour with a group of about a dozen people into the missile silo. Our guide, Jerry, was fun and loved teaching us about the Titan missiles. The tour price was $9.50 and requires climbing - up and down - 55 steps. Anyone over 5'10" is required to wear a hard hat. The "stuff" over the silo in the above photo is for explanatory purposes only. The Titan Missile sites were pretty "stealth". Nothing to attract attention. 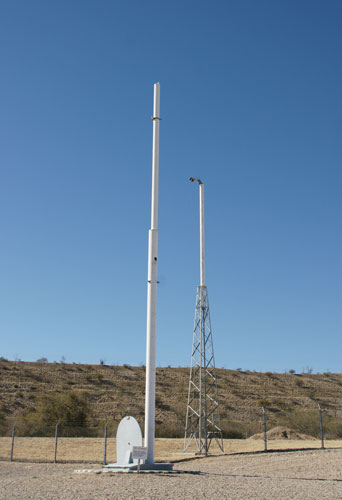 The only things seen from above ground during the Cold War were a few of these communication towers. There were about six different ways the Pentagon or the Air Force could reach the staff housed below ground in the missile command center. The first one was the main radio line - the other five were back-ups! 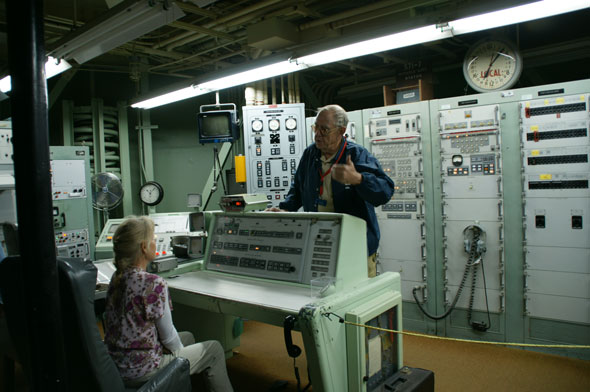 Four staffers took 24-hour shifts in the missile silo, waiting for a call from the military to turn a key that would launch the bomb.

They waited for twenty years and never received a call. 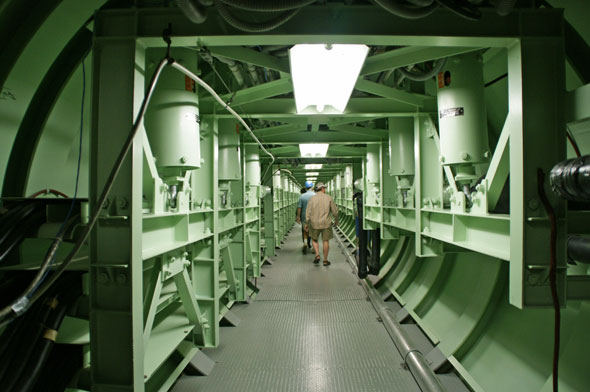 After "pretending" to launch the missile - the security used to guarantee the missile really was to be launched was fascinating - we walked through a long steel tunnel to see the only remaining Titan II Missile. 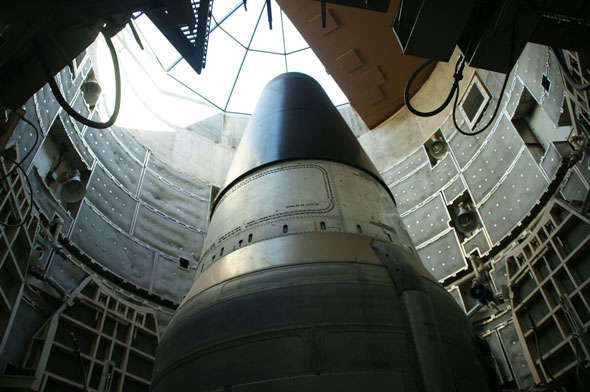 It was big. Really big. A nuclear bomb that could destroy a city the size of Phoenix was housed in the black tip of the 103-foot-tall missile. The other 95 feet held liquid fuel to power the rocket into space!

Even if blowing up the earth with nuclear weapons isn't your idea of a fun afternoon, The RV Goddess suggests you take a tour of the Titan Missile Museum if you are ever in the Tucson area.

Until my next update, I remain, your Make Love, Not War correspondent.