This Will Make You Cry

TrackTown, USA: After four short nights at "home", DT and I pointed the bus south and are now in The Eug. We will keep the motorhome here for the duration. Though I WANT to sneak-away for a weekend on the coast here and there, I suspect our RV will remain fairly permanently parked in Eugene through the Olympic Track & Field Trials.

We are on the monthly rate. We are living in a trailer park.

Enough of our sad situation. All over our Great Nation, athletes are competing for a spot on the US Olympic team. Track & field, archery, fencing, volleyball - you name it. Proctor & Gamble (apparently now P&G) is sponsoring the US in the Olympics and are paying special homage to the moms who have spent countless hours driving their kids to practice, meets - doing laundry, feeding their children, etc - waiting for that One Shining Moment. P&G are giving every US Olympic Mom $1000 to pay their airfare to London! The Future World's Greatest Athlete, Ashton Eaton - and his Mom, who raised him as a single-mother - are part of the P&G promotion and were on the Today Show Tuesday morning.

I have watched this ad three times and I cried like a baby each time.

After we checked-into our new home in Eugene, we went to Marche for dinner with Lauren Fleshman and Jesse Thomas. Professional athletes (same age as The Lovely Lisa), this married couple met at Stanford, where they were both on the track team. Jesse (also from Bend, Oregon) is a professional triathlete, and has just won back-to-back Wildflower Triathlons and was the March Triathlete Magazine coverboy. Lauren was 7th in the World Championship 5000m in Korea, but has been battling a knee injury for months, while still training for the Olympic Trials. In their spare time, Lauren & Jesse have created an energy bar that has no added sugar or chemicals - Picky Bars. The energy bars are gluten & dairy-free. It's Freaking Science Dude. 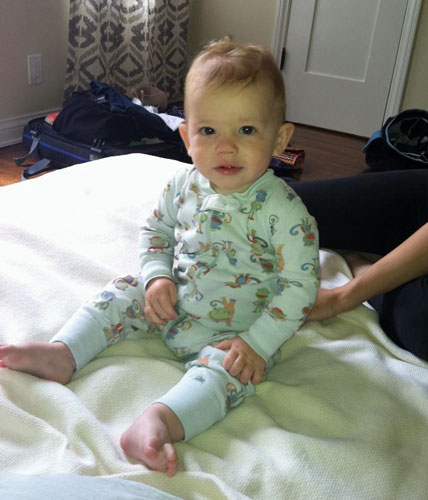 Jen sent this photo very early this morning. Seems a certain little guy decided to visit the guest room. Who could say no to Leo? Leo had his 9 month check-up this week. He is strong, healthy, growing like a weed and practically perfect in every way. 17 pounds!

Captain Jim and Mary are still at the Motorcoach Country Club in Indio - after moving into their new fabulous motorhome. This afternoon, they took their golf cart down to our lot and sent this photo: 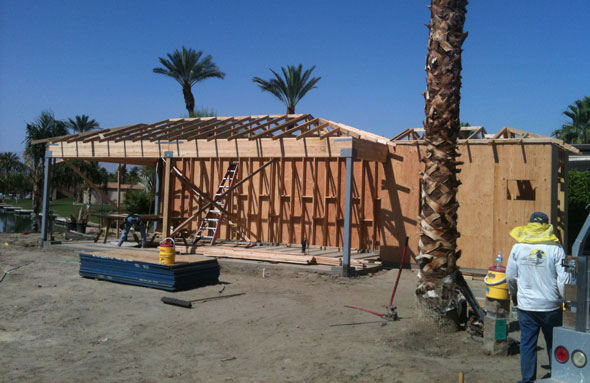 I'd say things are progressing at a rapid rate.

Until my next update, I remain, your Motherly correspondent.
« Warm Potato Salad Flowery Friday »