The Yellow Rose of La Quinta

Indio, California: The temperatures reached 80 degrees today and what a great day we had in the Coachella Valley. Fellow campers stopped-by while on their morning walk - happy to see the "Duck Bus" back in the resort. My lazy habit of a mid-morning run is going to have to come to a stop. It is just too hot to run at 10 o'clock in the morning. I am going to have to run at 7 or 8 in the morning. That is not going to go over very well.

My Driver schlepped me all the way up to Palm Desert to buy a new camera this afternoon. I needed wanted a new pocket-sized camera. I am using my old pocket camera less and less. It was getting a little beat up and just doesn't have all the new bells and whistles... so today I purchased a Sony Cybershot DSC-HX5V. (The "V" at the end of the model number means the camera has a built-in GPS for tagging photos. I have no idea why I would ever want to know the GPS coordinates of anything I photograph; can anyone explain this to me, please? The feature can also be turned off.)

The camera has a very cool panorama feature!

We ran a bunch of errands - restocking supplies - now that we are in a town larger than Borrego Springs.

At two o'clock, we were still out running around and were starving. We were in La Quinta, parked in front of RosAmarillo Mexican Restaurant. (Yellow rose, in English.) We tried RosAmarillo a while ago and were not overly impressed, but were hungry enough to give it a second chance. Happy we did too, as our lunches were really good and my margarita was delicioso! 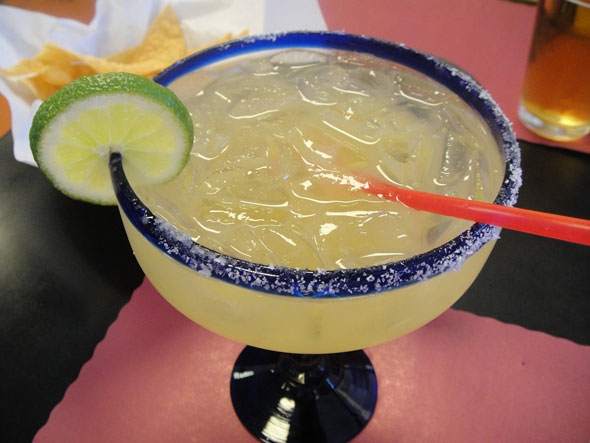 Tequila. It's what's for lunch. 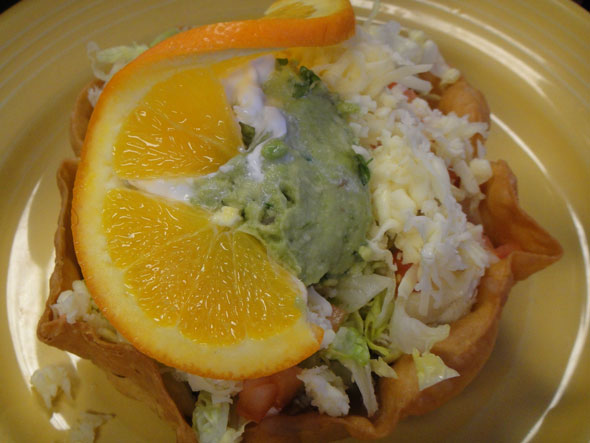 We each ordered something from their $6.95 lunch menu. I had a chicken tostada salad. It seemed a bit small, but I kept eating and eating and the salad didn't get any smaller. Layers of beans, shredded chicken, lettuce, tomatoes - topped with sour cream, guacamole and a bit of white Mexican cheese. I will not be eating dinner. 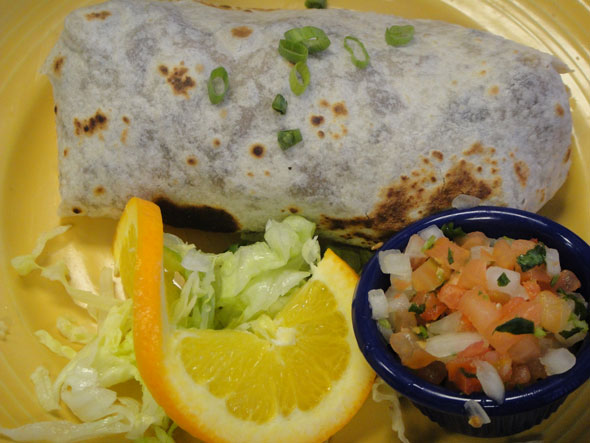 David had a carne asada (grilled steak) burrito. It was loaded with beef, but also included rice and beans. He will not be eating dinner. Mostly because I will not be cooking dinner.

NOTE: the food photos were taken with my old pocket camera. The new camera needed a battery charge before use.

NOTE: my margarita cost more than my lunch.

Until my next update, I remain, your stuffed correspondent.

« Back in Indio Pampered »