Indio, California: We were greeted with a perfectly hot day with barely any wind. Yes! Exercise early on a day like this, and spend some time in the swimming pool, because that wind is sure to return. So blessed to be in the Coachella Valley.

And blessed that Dear Mary is such a sweetheart. After my Oregon friends cooed over the GO DUCKS bracelet she made for me, my Dad's wife went out and purchased more bling and spent yesterday - on their vacation! - in their hotel room beading for my friends! 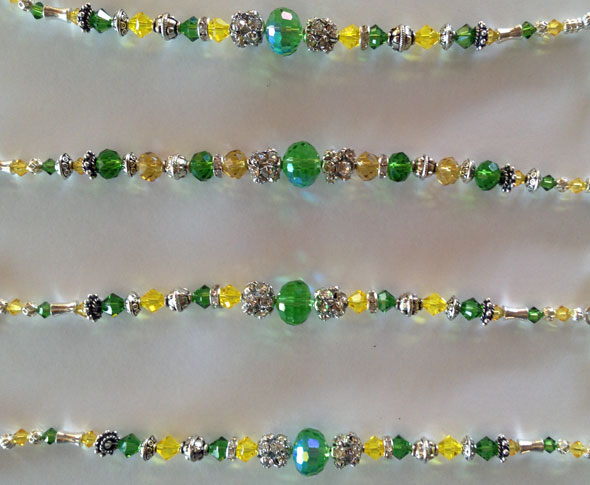 Aren't they so gorgeous? Mary is just learning to bead, but I think she could sell these treasures for a large chunk-o-change in Autzen Stadium on game day. But she said no. Mary just wants to make bracelets for my gal pals.

Is it a coincidence the bracelets were delivered the same day we learned the Ducks lost the National Championship football game to a team filled with cheaters and scammers? Coincidence or Luck of the bracelets?

Dave and I fetched My Dad and Mary from their hotel for our 5:15p dinner reservations at LuLu California Bistro (website has sound) in Palm Springs - and Dad and Mary were treating us to the theater after dinner. 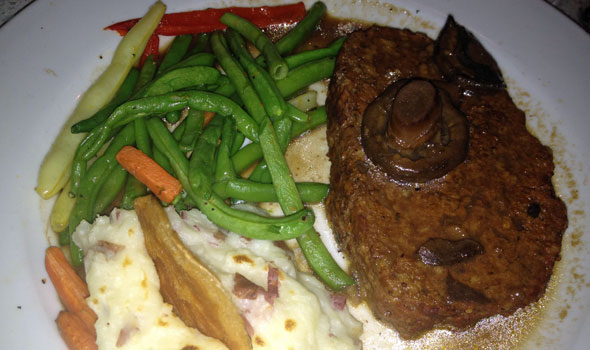 LuLu has a prix fixe meal for the pre-theater crowd - appetizer/salad, main course and dessert for $20 ($16 before 5p). I ordered a salad and the meatloaf with mushroom sauce. Delicious and I did not have to cook. We really enjoyed LuLu and hope to return... even though Palm Springs is about a 40 minute drive from Indio. (Did y'all know this?) 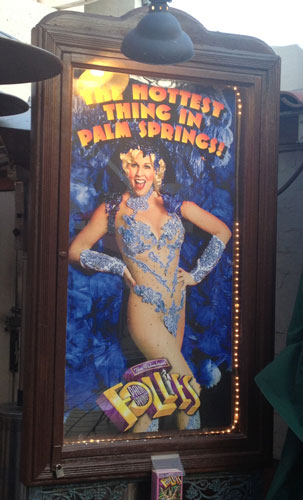 We do not usually dine at 5:15p, but Dad and Mary had invited us to join them for the 7 o'clock showing of the Fabulous Palm Springs Follies. Finally, after all these years in the desert, we attended the best vaudeville show in America... where the stars are aged from 60 to 90. Photography is not allowed during the show, so I am unable to show you the amazing burlesque-style costumes the geriatric women donned, but I can tell you upfront - they were amazing (and check-out the little video below). "In-shape" does not describe these women. They are super-fit and G-d originally blessed them with long legs, slim figures and ample bosoms (well, maybe a few of the bosoms were purchased or rearranged at a later date). They are beautiful women, handsome men - and all so very talented. When introduced, the stars ran-off a huge resume of Broadway plays, television shows and films in which they had starred. These people were on the Ed Sullivan, Carol Burnett and Johnnie Carson shows! 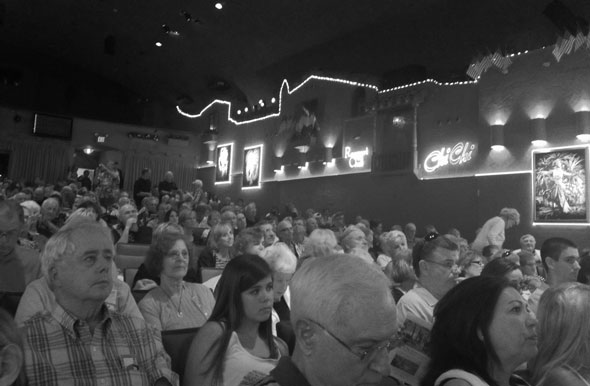 The theater is beautiful - in downtown Palm Springs - and every seat was filled this evening. The singers/dancers perform 9 shows a week... which is probably why they are in such amazing shape.

Pretty-much what we witnessed tonight, in less than two minutes. 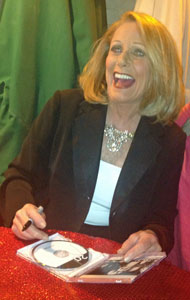 The Fabulous Palm Springs Follies follow a classic vaudeville script - singing and dancing in elaborate costumes, a few tasteless (hilarious) jokes by the Master of Ceremonies, more entertainment (this time by a hula hoop artist), an intermission - and then more singing and dancing in more elaborate costumes, more member-of-the-tribe banter from the host, followed by the Big Star (this month, Lesley Gore), and the Grand Finale - a patriotic salute to America and all branches of the military, complete with flag waving and balloons dropping from the ceiling onto the audience.

Fifty years ago last month, Lesley Gore released It's My Party and I'll Cry if I Want To. She was 16, which makes her 66 today. This evening Ms. Gore sang "Party", a few other hits from the day and finished with the amazing anthem, You Don't Own Me. (What a great song.) She looks fabulous - and was outside autographing her latest CD after the show! Of course.

If you are ever in Palm Springs (during "the season"), please make time to see the Fabulous Palm Springs Follies. I am sorry I waited so long. The talent and devotion to the business in the performers is amazing. They just won't give up the dream. Ever.

Until my next update, I remain, your very short correspondent.