Track Town, USA: Another fabulous day at Historic Hayward Field! The Pre Classic is an IAAF Diamond League event, meaning it's all about the points and all about the money for these professional athletes. Competition is fierce. It's their job. The temperature was perfect for a meet - mid 60's - and there was no rain, but the sky was a bit threatening. 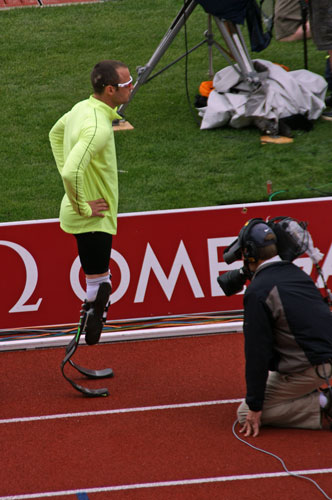 Oscar Pistorius was also entered in the field. There was quite a to-do about Pistorius around the 2008 Olympic Games. Some felt he should only compete in Paralympic events. Some felt the prosthetic blades would give him an advantage over able-bodied runners. In the end, it was determined if he could meet the Olympic standard (45.30 seconds) he would qualify to represent his team in Beijing. Pistorius fell short of that goal, but won gold in the 100m, 200m and 400m in the 2008 Beijing Paralympics. This afternoon, Mr. Pistorius missed his goal again, finishing last in 46.86. He still has one more competition - New York next week - to reach the Olympic qualifying standard. GO OSCAR! 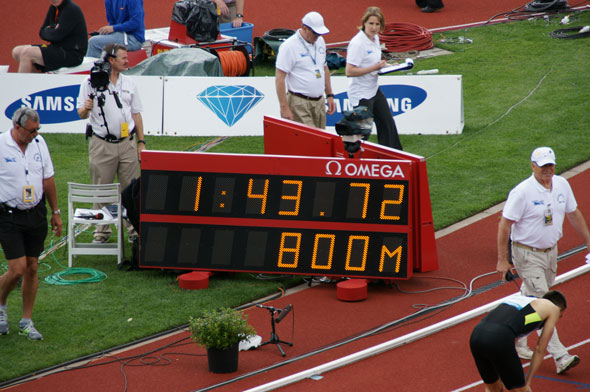 The 800m was blazing! One of the fastest I have ever witnessed. Sudan’s Abubaker Kaki won the race, fighting-off the hot new 18-year-old Mohamad Aman of Ethiopia. Eugene crowd favorite, local-boy Nick Symmonds was third in 1:44.32.

After the race, the athletes waited for the ridiculously-slow Omega timing people to get their act together and post the results. I can't wait for the Olympic Trials when Flash Results will be in charge of the timing.

China's Lui Xiang came back from his injuries with a huge bang this afternoon, winning the 110m hurdles in 12.87, which would have been the world record if not for a little wind at his back. Dang! Lui Xiang was ecstatic! He jumped for joy and literally flew around the oval on his victory lap. Everything pointed to one fact: He's back. Just in time for the London games. For the first time in 25 years, a javelin competition was held at the Prefontaine Classic. Duck alum and Oregon native, Cyrus Hostetler finished fourth behind Vadims Vasilevskis of Latvia. Vasilevskis won with a mighty 277+ foot throw. We are so proud of Cyrus and are confident he will be representing America in London! Mo Farah won the 10000m last year at this meet and he won the 5000m in 12:56 today. Though he competes for the United Kingdom, Farah now lives and trains in Portland, Oregon under Alberto Salazar. He is a huge personality and is extremely popular with the fans. Isaiah Koech finished second, and Mo's training partner and Duck alum, Galen Rupp finished third in 12:58 in a personal best - becoming only the 7th American to run 5000m in under 13 minutes. I'm telling you, they must sprinkle magic fairy dust on Hayward Field. 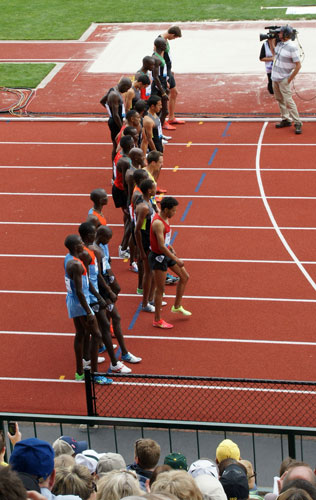 The most anticipated race of the meet (for me) was the last event - the Bowerman Mile. I can't imagine the Olympic 1500m final will have such a prestigious field. The boys were smoking-fast! One racer even fell, tumbled-over, and was hurdled by the other racers. This field was so loaded - all 16 finished under four minutes. The last three racers were the Americans - Bernard Lagat, Lopez Lamong and our own Duck, Andy Wheating. 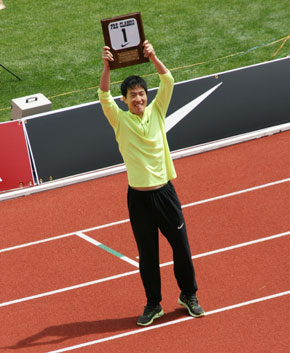 flotrack website. Until my next update, I remain, your thrilled correspondent.
« The Free-Pre Home Sweet Home »