TrackTown, USA:  We have spent the past two days at Historic Hayward Field watching amazing track and field. The Prefontaine Classic is, annually, one the best meets in the entire world. This year the meet was outstanding.

But first, a quiche I made Friday - using any and every bit of vegetable left in the fridge (and a few slices of turkey bacon). It was pretty. It was tasty. Less stuff to move from the RV to our house in Portland tomorrow. 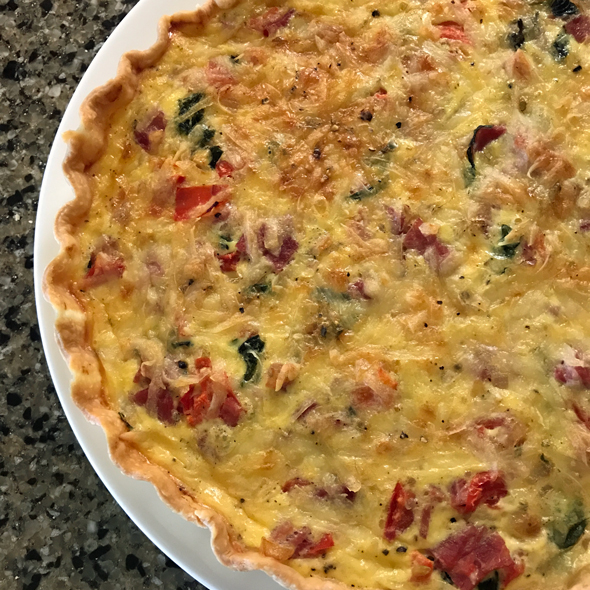 It really isn't a RV Goddess blog post without a photo of food.

The Friday night track events began at 7p. Meet admission is free, and this year the program featured female-only competitions and was titled "Joan Benoit Samuelson Night", honoring the first woman to win the first-ever Olympic marathon for women. Shocking that it took until 1984 for women to be "allowed" to race the distance. Mrs. Samuelson is now 60 years old. You Go Girls. 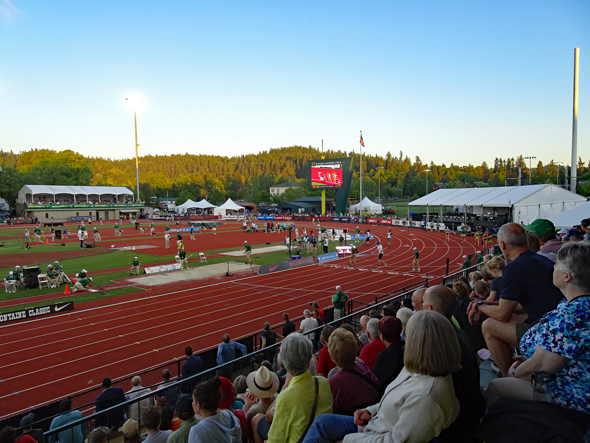 I love that on a Friday evening in Eugene, no one seems to have anything better to do than attend a track meet. There was one very special reason the crowds gathered: Ethiopian Genzebe Dababa was going to attempt the 5000m world mark. Ms. Debaba's sister, Tirunesh, currently holds the record, adding quite a bit of intrigue. Genzebe did not break Tirunesh's best, but clocked a very decent 14:25. The world record is 14:11.

In other events, 14-year-old high schooler, Tamari Davis, broke the world record for her age group in the 200m sprint. Miss Davis ran 23.21. The world record is 21.34, set in 1988 by Florence Griffith-Joyner. Kenyan Celliphine Chepteek Chespol threw a shoe in the steeplechase water hazard, slipped it back on, and won the race in 8:58. Her new nickname may be Cinderella? Americans Brittney Reese and Tianna Bartoletta relived their Rio Olympic long jump show-down Friday evening, with Reese coming out on top this time. An 800m race, 1500m and javelin competition filled out the dance card. 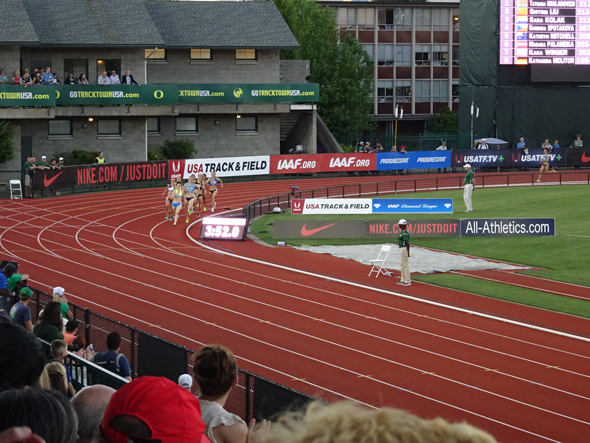 At the end of the meet we went (up to the balcony of the building in the background of the above photo) to say hello to Dave's college coach, Bill Dellinger, and caught up with old friends - including two of Dave's college teammates, Alberto Salazar and Matt Centrowitz.

While the races were fantastic last night, today's Pre Classic was, again, stacked with one exciting competition after another. The weather was also outstanding. Sunny, mid-80s, and clear. We had seats in front of the pole vault - in the shade. 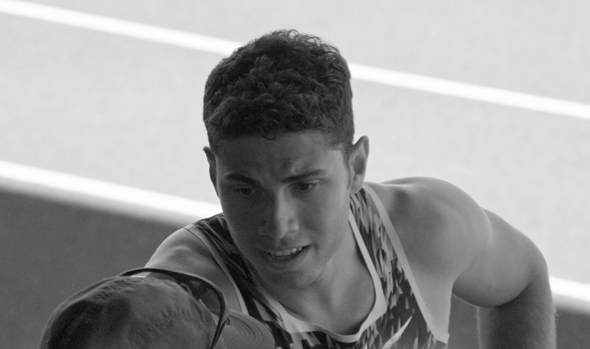 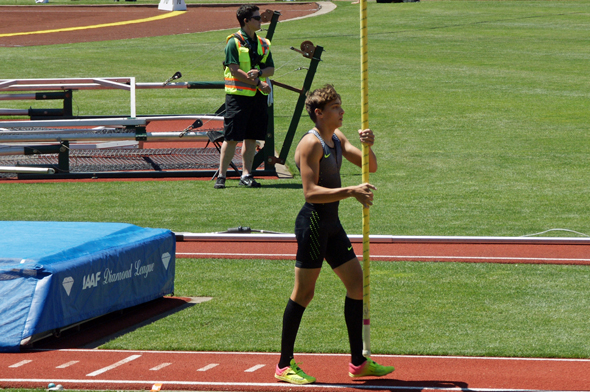 I can't describe well enough how the pros were so kind and welcoming to the young jumper. They all spoke with him, patting him on the back, and congratulating Duplantis after every completed jump. When his competition concluded, they all hugged him. Smiles all around.

The popular world record holder, Frenchman Renaud Lavillenie, jumped in an University of Oregon themed unitard, as he did last year. Lavillenie loves the Canards! 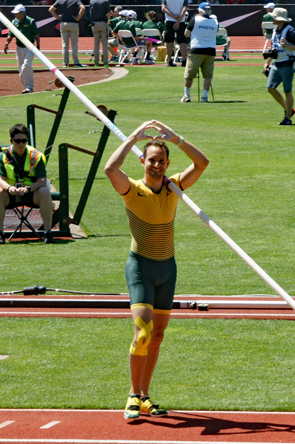 Lavillenie was introduced by stadium announcer, Garry Hill, as "jumping in the traditional green and yellow colors of France" - and we all laughed. I especially loved that Lavillenie made an "O" after every successful jump. (It's called throwing your O, by the way.)

Pole vaulters are their own special breed, devoted to studying the techniques required. Though possessing the most chiseled figures in the sport, they become Gumby-like while mid-air. Here are three shots of American Sam Kendricks as he vaulted this afternoon: 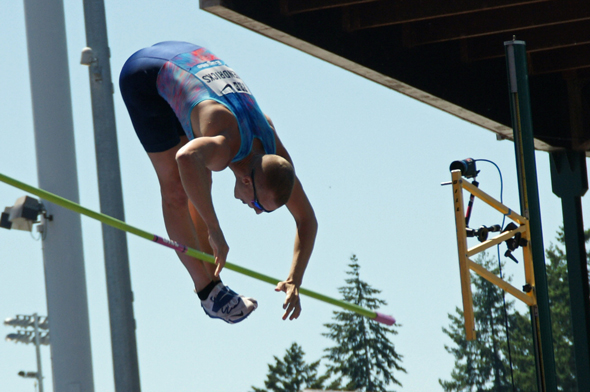 No one had a spectacular day vaulting. Kendricks won the field with a vault just over 19 feet, Lavillenie 2nd, Piotr Lisek of Poland was third, and 17 year old Duplantis was fourth with an 18', 8.75" clearance. It is very early in the season. Love me some vaulters.

But not as much as some runners. Matthew Centrowitz had to scratch from the famed Bowerman Mile due to a health issue, but he sat with us during the meet. We enjoyed catching-up, but wish he been able to race. 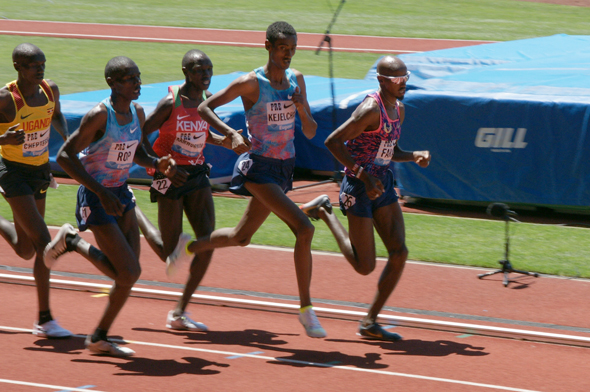 England's Mo Farah won an exciting 5000m. It will be his last track race in America. After the World Championships, Mr. Farah will retire from the track and focus on the marathon. At about the half-way point in the race today, with Farah running in about 6th place, he waved up to the crowd and asked for encouragement. It was a pretty gutsy thing to do and we all said, in near unison, that he had better win after asking the crowd to cheer him on. A few seconds later, Farah sprinted into the lead and won the 5000m (3.1 miles) in 13 minutes. 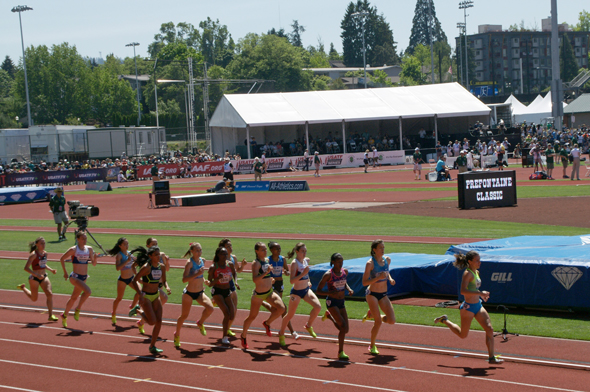 One of the most anticipated races of the afternoon - the women's 200m was loaded with the fastest women in the world, including the top three medalists from Rio: Elaine Thompson, Dafne Schippers and Tori Bowie. America's Sweetheart, Allyson Felix, and Oregon alum, Jenna Prandini, were also in the race. Today, Ms. Bowie blew the other girls off the track with a blazing 21.77 victory.

Other exciting events: Duck hurdler, Devon Allen (5th place in the Rio Olympics) came back from ACL surgery to finish 3rd in the 110m high hurdles. You may recall Devon Allen also played football for the Ducks, which turned out to be a really good way to blow-out a knee, as he suffered two knee injuries as a wide receiver. He has, thankfully, retired from football and is pursuing a career as a professional hurdler. Mr. Allen will graduate from the University of Oregon next month and claims he will play football again after he wins the 2020 Tokyo Olympic gold medal. On the other side of the track, Will Claye and Christian Taylor (once college teammates at Florida) gave the fans a good show in the triple jump. The two men went back and forth - leap-frogging all afternoon - with Taylor finally winning with a massive 59', 5" soar. How is that even possible?

There were so many other amazing races this afternoon and so many records broken, I simply cannot keep count. Another brilliant day of The One True Sport.

Though... apparently... not everyone in the bleachers was excited to watch the meet: 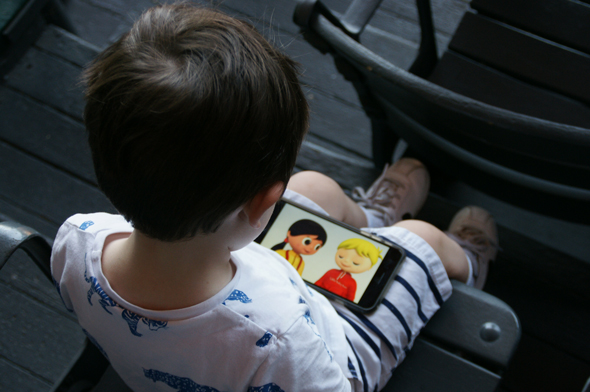 Until my next update, I remain, your "we are going home tomorrow" correspondent.

You may also like:
Complete results
Register-Guard slide show: Photos of Steve Prefontaine
Meet photos from The Oregonian