Santa Nella, California: As you probably know, Our #2 Ducks sucked the big one last night and lost to the #5 Stanford Cardinal at Stanford Stadium in Palo Alto, California. On national television. Here is a quick recap of that sad day - plus what we did today.

The two RVs left Napa Thursday morning and drove south to the Stanford campus. We were lucky to possess two over-night RV parking passes for our motorhomes just a few feet from the stadium! We set up our campsites and - slowly - our friends/family showed-up to pre-function for one of the most anticipated college football match-ups of the year. 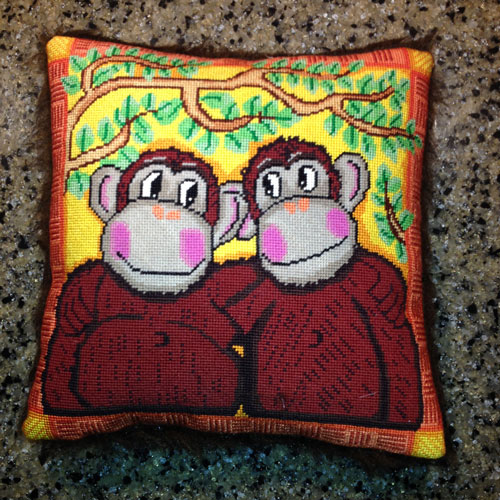 Our housesitter, Brandon (who has the best job in the entire world), flew down for the game. He brought our mail and also the little monkey pillow I had needlepointed for our Little Grandson, Leo. I had the 9x9-inch pillow finished with faux fur on the back, and it was ready a few days ago. Totally tacky and totally huggable! I am so pleased with the result and can't wait to give it to the CBE. 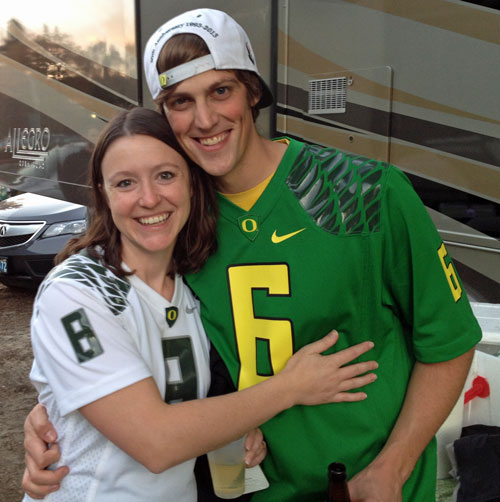 My cousin's daughter, Kristin, and her fiance, Neil - both Ducks -
stopped by our tailgate party. They live/work in the Bay Area. 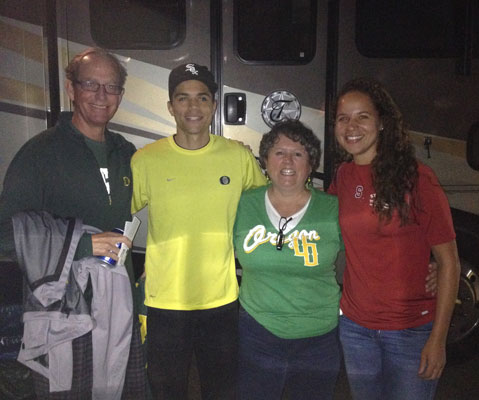 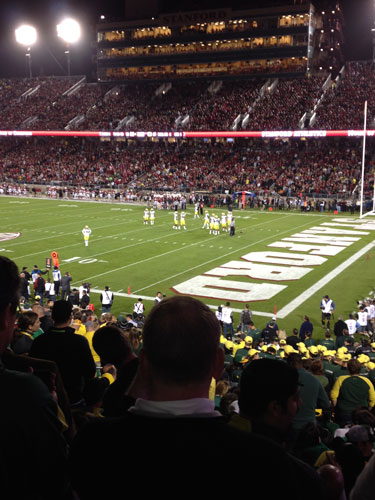 We were camped only steps away from the stadium and we had fabulous seats. The Ducks were picked to win by 10 points. Well, that just didn't happen. The Ducks were simply terrible and not the team we had watched slaughter every other opponent all season. This evening, we learned our fabulous Heisman-candidate quarterback, Marcus Mariota, had seriously injured his knee and the game plan was changed at the last minute to stop his usual running game (Marcus runs in a lot of touchdown) and switched to a throwing game.

No excuses though. It was simply ugly. Don't let the final score fool you. The Ducks scored most of their points in the last few minutes of the game.

We woke to a nearly-empty parking lot at Stanford Stadium. Steve and Mary headed north in their SUV. (They drove all the way home to Portland today!) Woody headed north in his motorhome - he made it to Yreka. 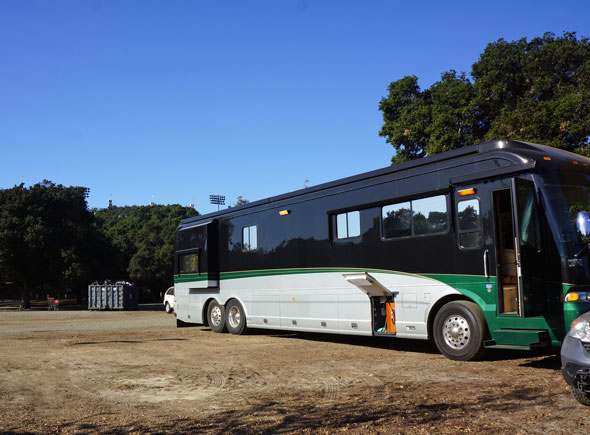 Though it was totally awesome to camp in the Eucalyptus Grove at Stanford Stadium (the third time we have stayed here), the place is so dusty and dirty. Our poor RV is covered in a coat of dust from all the cars driving around the parking lot. Cough. Cough. 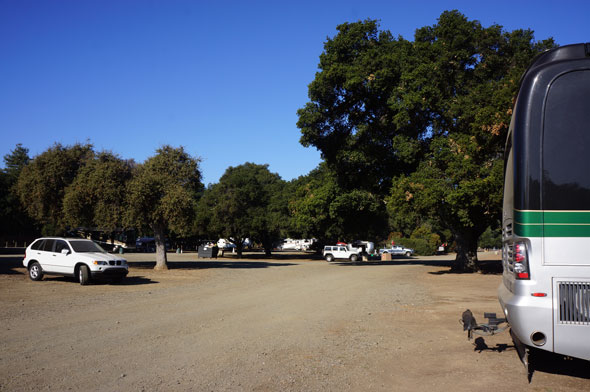 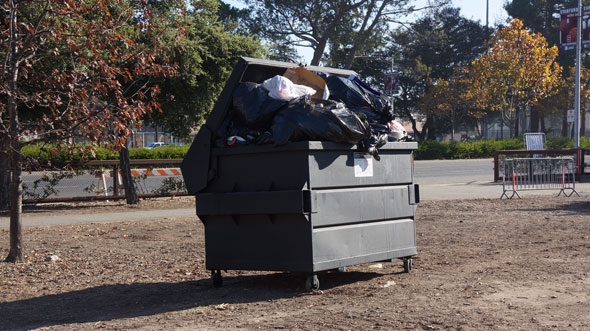 This photo perfectly describes how I felt this morning.

Dave and I traveled from Palo Alto to Livermore to visit his oldest friends, Mark & Debbie. Mark & Debbie have lived for years in La Quinta and we saw them every week while we were in Indio. Now they have relocated, closer to family, to Livermore. We wanted to see their new house and catch-up with their new lives. 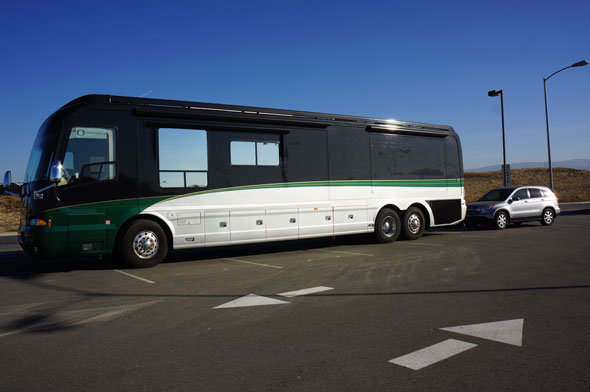 My Driver parked our RV and car in a huge empty college parking lot and we walked to Mark & Debbie's house. The school charged $2 for all day parking. We bought a parking ticket for the bus and the car... and hoped campus security wouldn't give us trouble... since we took-up about eight parking places.

We loved Mark & Debbie's new "down sized" house and are envious of their new easy lifestyle. One story! They have a large open-concept living/dining/kitchen (granite countertops and stainless appliances with a gas range) area, three bedrooms, two baths (including ensuite master with a big walk-in closet, a two car garage, huge patio and no yard work! 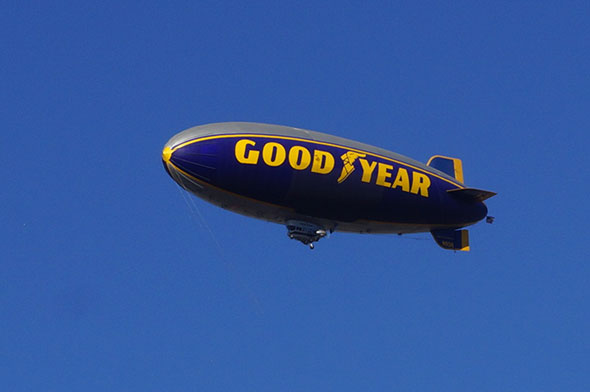 One strange thing today: the Goodyear Blimp was hovering over Stanford Stadium last night, broadcasting the game with ESPN. The blimp followed us all day. It hovered over us as we parked our bus in Livermore... then later, when we drove out to Wente Vineyards for lunch, the blimp hovered over the vineyard. 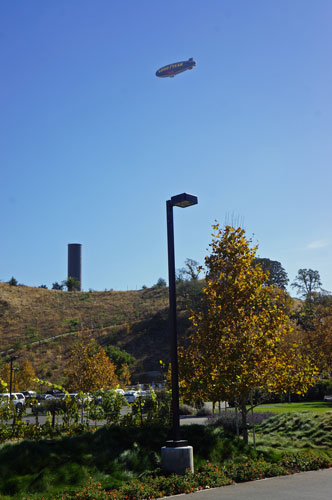 Why was the blimp following us? 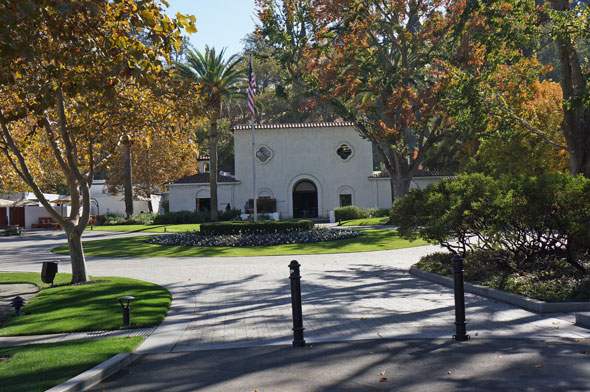 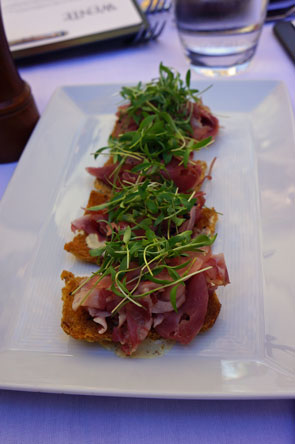 It's not very often I give a dish a three-photo spread on this website, but the house-cured Lamb Pastrami appetizer is worth the satellite bandwidth. 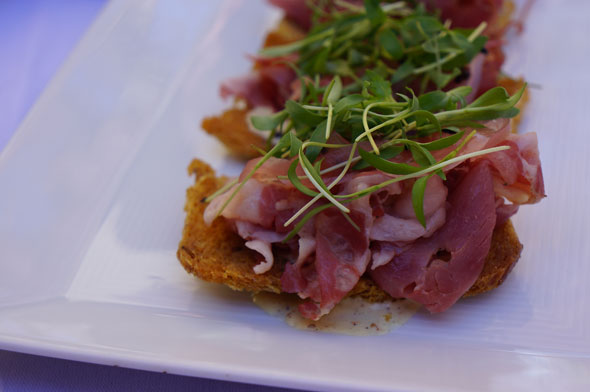 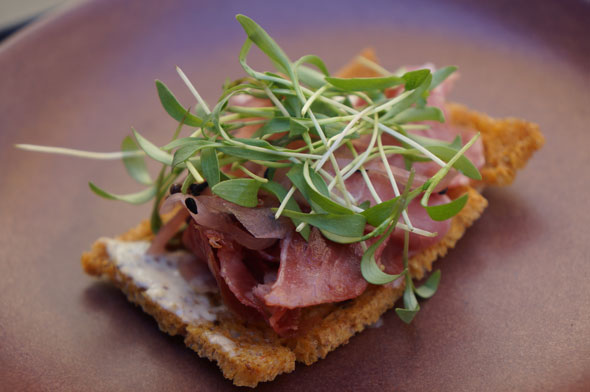 The sprouts on top are cilantro micro-greens. 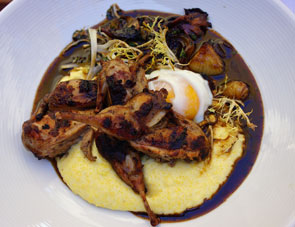 Or you could have grilled chicken with fall squash mole, roasted parsnip, pomegranate and walnut (left)... or quail cacciatore over creamy polenta with a poached egg (right). Dang. 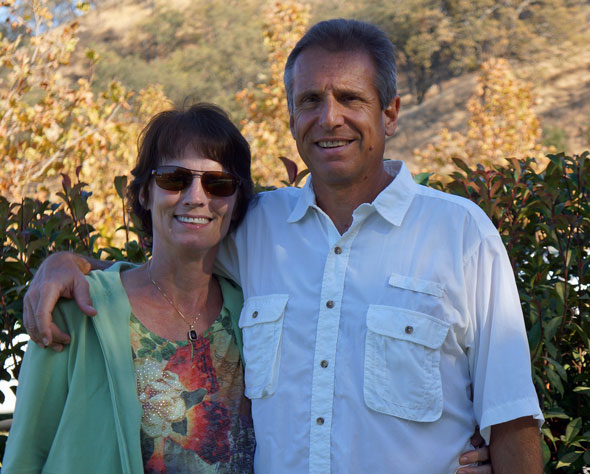 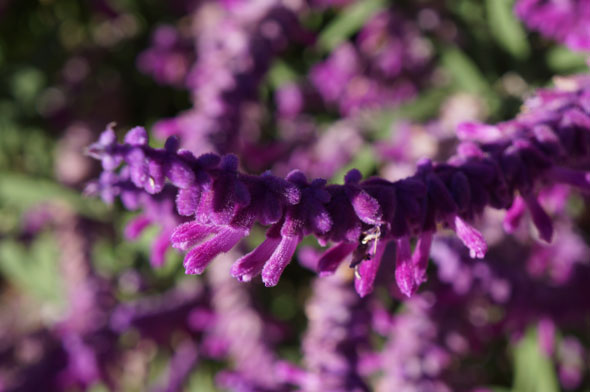 Pretty flowers on the grounds of the vineyards 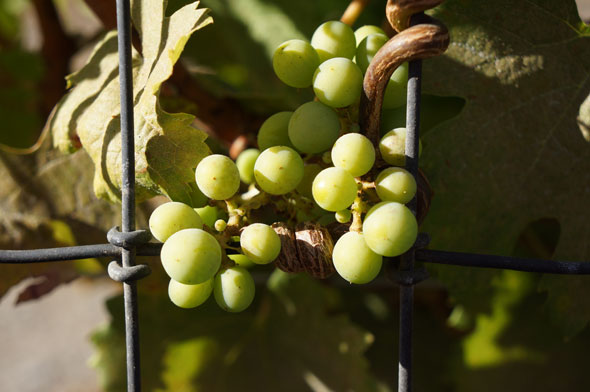 A few grapes still remaining on the vines

After another great day with great friends, we pointed the Magna Peregrinus south on bumpy I-5, stopping before sunset to watch the #19 Duck men's basketball team beat Georgetown from South Korea. Yes, Korea. The Ducks played in the Armed Forces Classic, and have been at Fort Humphreys for four days prior to the game, visiting our troops and learning about their work in South Korea. What an incredible experience for Georgetown and Oregon students - and how fun for the soldiers to see college basketball LIVE!

Enough wine. Enough restaurants. Tonight I am soaking a few Yellow Indian Woman beans from Rancho Gordo overnight in my crockpot. I caramelized a few shallots and a few cloves of garlic. Tomorrow I will add the leftover (frozen) duck leg confit from the Benbow Inn on October 31 to the drained beans - along with the leftover grilled chicken from lunch today... fresh rosemary and a little chicken stock. This will stew in my little crockpot (nestled in the kitchen sink!) while we drive down the road tomorrow. So excited for a home cooked meal.

Until my next update, I remain, your "I Really Love My Ducks" correspondent.

RV PARK: Santa Nella RV Park. Just off I-5 at Highway 33 and close to the famed Pea Soup Andersen restaurant. Though they did accommodate us, this park is difficult for Big Rigs. 50 amp, full service site and we paid only $27. 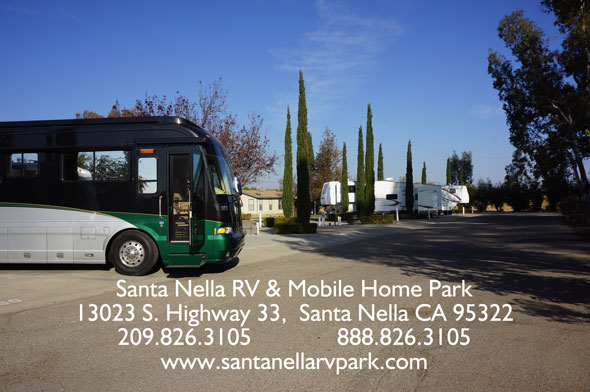 « Do Not Read if Hungry Continuing South »