Portland, Oregon:  The calendar may now read September, but there is no sign of Autumn here in the Pacific Northwest. Texas is drowning and Oregon is on fire. 25 forest fires are now burning out of control in Our Great State. Thousands have been evacuated. Homes are burning. Schools are having to postpone opening day due to so many citizens displaced/evacuated and/or the air quality is so poor. Famed bicycle tour, Cycle Oregon, has been cancelled for the first time ever. The largest fire in Oregon (also the largest fire in the United States) is the Chetco Bar Fire, now over 200 square miles/132,000 acres in size. With nearly 2000 fire fighters attacking the blaze, the forest fire is only 9% contained. Oregon's lone National Park, Crater Lake, is so smoky Wizard Island can't be seen in the middle of the lake, and the lodge is on red alert to be evacuated due to the Spruce Lake and Blanket Creek fires in central Oregon. Bend and Sisters, also in central Oregon, are smogged-in with the fast-moving Milli fire. Falling ash coats streets, houses, cars and lungs. Sisters (where my Brother Rick lives) is on stand-by for evacuation. After one of the wettest winters on record in Portland (45 inches and 145 days of rain), there hasn't been a drop of rain since June.

Even with our state is such a heat wave and burning up, Oregonians are raising money for Texas flood victims and loading trucks filled with volunteers and supplies and pointing the needed help south. Very proud of Oregonians - and everyone from every state volunteering and donating to the victims of Hurricane Harvey.

It brings my thoughts back to 2009 when Dave and I drove the Magnus Peregrinus across the United States on her Maiden Voyage, hugging the southern shore. Hurricane Ike had completely wiped-out southern Texas five months prior - knocking over homes like they were made of match sticks. It was horrifying to see thousands of bull-dozed debris piles, heaped for removal or future bon fires. Every heap represented a life. A business. School. Home.

I made a video that day, presented above. It is disturbing, but if you watch to the very (very, very) end of the 4 minute video, you will be rewarded with the powerful voice of the amazing late-great Roy Orbison singing the sadly appropriate Beyond the End, written by Jimmy Buffett, Marshall Chapman and Will Jennings. (The rest of the time, you have to listen to Jimmy Buffett. Sorry, but I kinda like him. Blame Red.)

Don't y'all wish Mother Nature would just coordinate her fire and rain?

On to more pleasant subjects.

Dave and I had to wake at 5a to get to the surgery center south of Portland for his 6:15 check-in time this morning. (Dave has been to so many doctor appointments since we have returned from the World Championships - blood tests, EKG, pre-op appointments, etc. I swear it was like they were going to do a major invasive open-heart or brain surgery instead of two simple puncture wounds to his knee.) Again, (same as when he had his other knee repaired in February) it is always good to know he is extremely healthy for a 62 year old man who can't walk without a knee brace/cane. (And... just saying... why wouldn't his EKG from February still be viable today? Why did he require another? Same health care system!)

DT checked-in, was called back to pre-op a few minutes later and was under the "scope" around 7:30a. At 8 o'clock, the doctor came out to the waiting room to tell me the procedure went well and he had removed about a quarter of the medial meniscus (padding in knee joint). We left the clinic at 9a... drive-through surgery. I drove My Driver home.

His surgeon is very well known and super-respected by a long-list of professional athletes and runners. Dave has know him for several years. This aided in Dave's over-all calmness... not to mention, Dave had this same procedure on his other knee in February and knew what to expect. The rest of the day involved resting and icing. The doc only gave him a few days off. Rehab begins immediately! 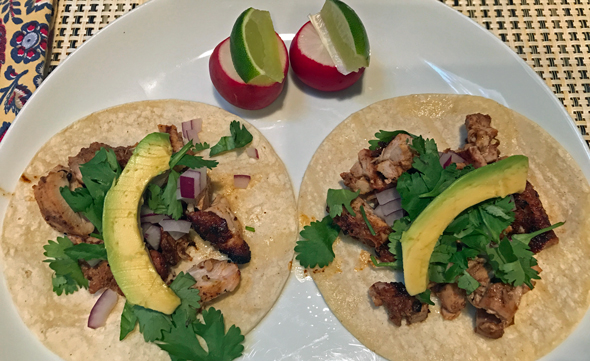 MONDAY: To heck with the Portland Taco Festival. We made our own - using my Chicken Taco recipe. 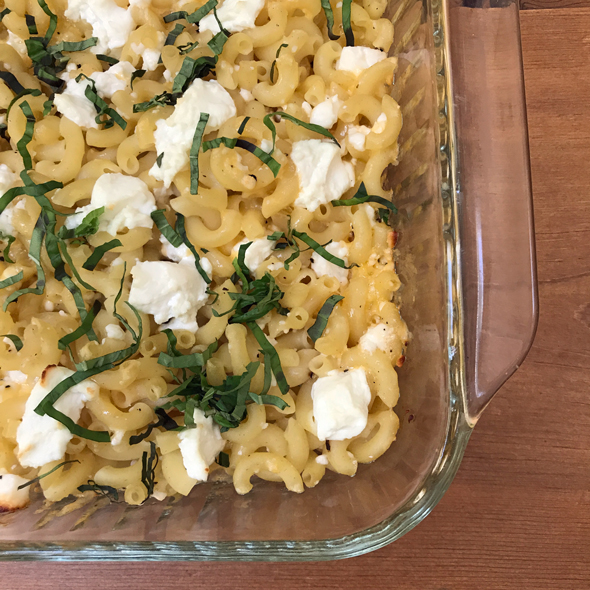 Prepping for Vegan Month and not wanting to waste a bit of food... Thursday lunch,
I used every little bit of cheese left in the house for mac & cheese. 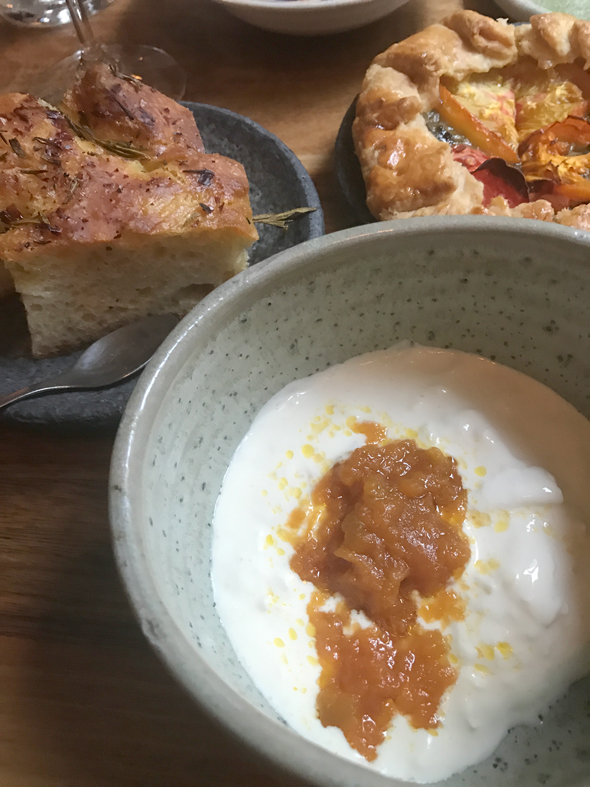 Melon poached in olive oil, served with burrata and bread at Verjus in Paris

Anyone recall the meal we enjoyed at Verjus our last night in Paris? We were served something described as "melon poached in olive oil for seven hours" with no more information. It was served with burrata cheese and rosemary focaccia bread. No recipe? No idea which variety of melon was poached? No problem. 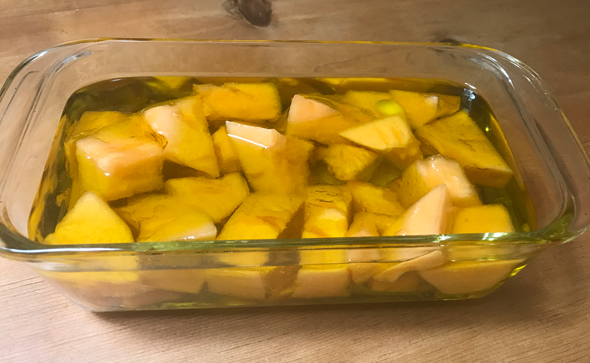 I tried it from taste-memory! I placed a nice sprig of fresh rosemary in the bottom of a loaf pan, along with two slices of yellow onion. Then I cubed half of a peeled juicy ripe (organic, grown-in-Oregon) cantaloupe and tossed in a few quartered cloves of garlic and a sprinkle of Kosher salt. The entire mess was covered in a lot of olive oil. I poached the cantaloupe flesh, uncovered, for six hours at 225 degrees. I did not stir the melon. 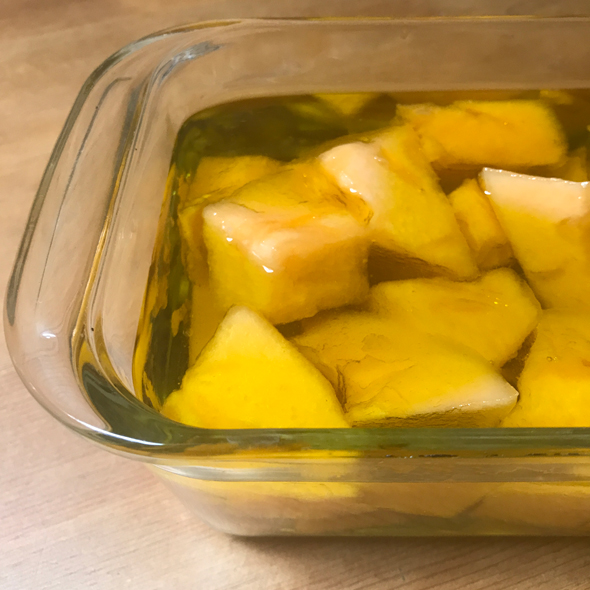 Ready for the oven

After removing the (now browned) melon from the oven, I let it cool for a bit, then used a slotted spoon to remove the melon chunks. The melon (and I think most of the garlic) easily mashed with a fork into a chunky paste. The rosemary and onion were discarded. (I strained, filtered, saved and refrigerated the olive oil, but have no idea how/if I will use the oil.) Our nearby New Seasons Market makes a very lovely rosemary focaccia, so I served the savory melon paste with the bread and milky burrata. 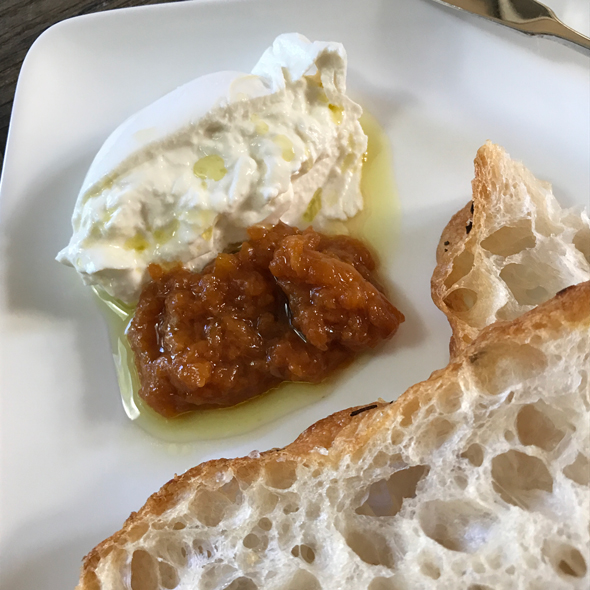 Dang, if it wasn't delicious and nearly identical to Verjus. The melon dish is vegan. The bread is vegan. The burrata is definitely not vegan. I think the poached melon would be fine served alone with bread/crackers, and your friends would be so curious as to the identity of the paste. It no longer tastes like cantaloupe, that is for sure. Vegans could easily substitute a creamy nut Greek-style yoghurt though, if desired. NOTE: Half a poached-and-mashed cantaloupe produced about one cup of paste.

Which... drum roll please... brings me to the first night of a month-long adventure in vegan cooking. No meat. No dairy. No eggs. No honey. No cheese. 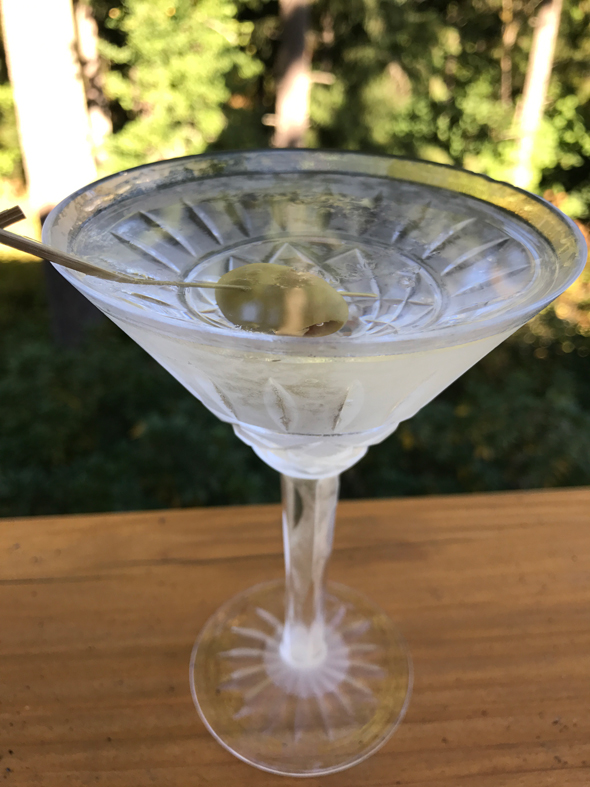 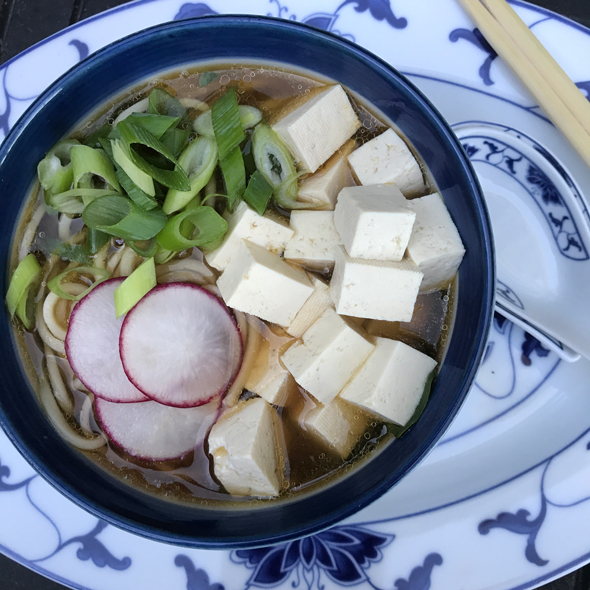 September 1 dinner: Chinese Noodle Soup. the broth was made with one cup veggie stock and two cups water, simmered with chopped ginger, soy sauce and sesame oil. I placed a large handful of fresh spinach leaves in the bottom of each soup bowl, topped with hot/cooked wheat noodles (spaghetti would be fine) and a little cubed extra-firm tofu. The broth was strained into the bowls, then topped/decorated with radishes and green onions. This is not an unusual meal at our house... but I usually use chicken stock. It was not missed.

Extra credit for using dishes I bought in Taiwan in 1986.

Until my next update, I remain, your Day 1 correspondent.