Yuma, Arizona: We have spent the past two days in Yuma visiting with My Dad. He is doing well, looks good and is very busy and very happy down here in the desert for the winter.

Today, we were invited to a "block party" at his RV resort. A group of fellow-campers deep-fried FOUR turkeys and smoked two turkeys. There were about thirty people at the block party - so they had a ton of leftover turkey - but everyone had a ton of fun. They listened to music, visited and played games.

One game was a new one for me. I can't recall the name of this game (maybe one of my readers can help me out?), but one person puts a toilet plunger (yes, you read that right - toilet plunger) between their legs, with the handle sticking-out straight in front and then they have to waddle walk 20 feet to their waiting teammate. The teammate has a roll of toilet tissue between his/her legs. The point of the game is to stick the handle of the toilet plunger into the hole in the middle of the roll of toilet tissue. 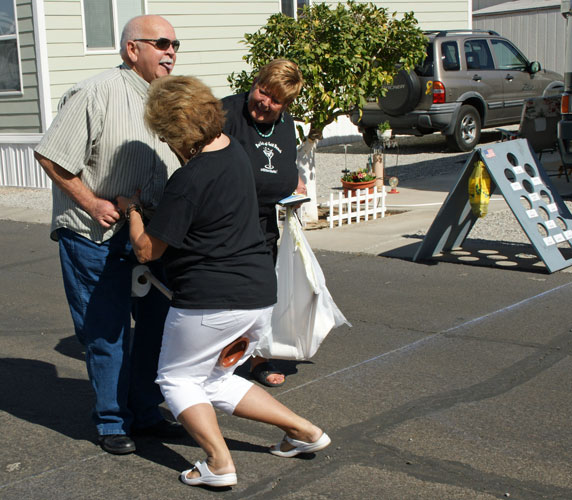 Dad's friends demonstrate how the game is played

As you can imagine, this game is just a tad pornographic. Maybe it was just a bit too racy for this crowd, so they decided to have all-women or all-men teams.

I couldn't play. I was laughing too hard. 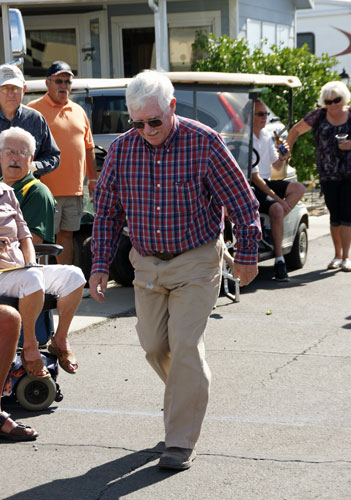 This is My Dad. My Dad - with a toilet plunger between his legs! The blonde woman standing by the golf cart in the back of the photo is Dad's girlfriend, Mary. Mary is taking good care of My Dad... considering he is the worst toilet-plunger-handle-aimer in the History of the World. 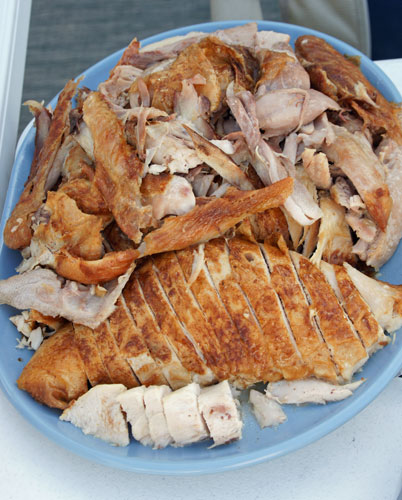 These people know how to eat! Quite a spread of potluck salads, sides, breads and yummy desserts. 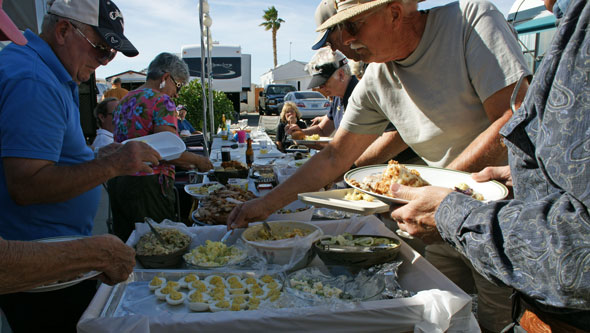 DT and I had a very good time at the Super Bowl Party and enjoyed meeting Dad's new friends. There were many outstanding cooks in the group - so now I know why My Dad is spending so much time exercising!

In other exciting news - our satellite internet system locked-on to the satellite in the sky for over one hour today. Unfortunately, it was while we out bingeing on eating turkey.

The Super Bowl was Super. I really didn't care who won as I have not watched an entire professional football game all year. The only thing I know is Clay Matthews is a lineman for the Packers and his little brother - Casey Matthews - played for the Ducks the past four years... so I cheered for the Packers. Not hard to do, considering the Packers also wear the green & yellow Duck colors.

DT and I had another great weekend in the desert. The cold weather is behind us - it was 78 today - and we are back jogging/running on the roads and enjoying the sunshine.

Until my next update, I remain, your twin-ply correspondent.

FROM OUR CAMPING JOURNAL RV LOG BOOK:  Shangri-La RV Resort - Mostly park models with some RV sites. Super tight squeeze - our slide rooms are about two feet from our neighbor. Pool, hot tub, nice fitness center, shuffle board. We have a gravel 50 amp pull-through. Free wifi for ONE HOUR, then you have to pay. What? Close to town and shopping, but on frontage road off I-8. I think it is called Shangri-La because people have been living here forever. We paid $42 with a Good Sam discount.

« Yahrzeit The Road to Borrego Springs »