San Diego, California:  Oh Dear Lord, you know I am joking when I say "rest day" when we are with two little kids, right? I simple meant we had nothing planned, no tickets purchased, no reservations, nothing on a schedule.

Lucy had a bad night and needed more rest, so Dave and I walked a few blocks with Leo to the New Children's Museum, while Lisa stayed at the hotel with Lucy. (I don't know if you are on the children's museum circuit or not, but a children's museum is really just a giant indoor playground. There are no children in dioramas to view.) The San Diego children's museum is one of the largest and nicest we have seen. 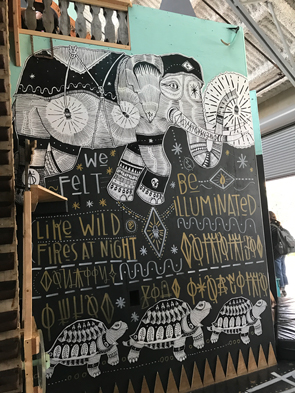 A staff member took one look at Leo and guided us immediately to the Wonder Sound area of the museum. This art installation has many varied areas to explore - but they are interconnected. It is a massive play structure, and many areas are through narrow passageways, so not accessible to any parent weighing over 90 lbs. This is a great way for kids to go off exploring on their own in a safe environment. One portion of the Wonder Sound is a completely dark room with spoons hanging on strings from the ceiling. There are ropes to climb, plus a room with a cross-weave of ropes to traverse. Leo immediately made a new friend and they disappeared in the labyrinth, only to be seen by us every ten minutes or so. We were worried at first, but there was only way in/out, so we knew Leo was in the labyrinth - somewhere. Photos of the Wonder Sound labyrinth: 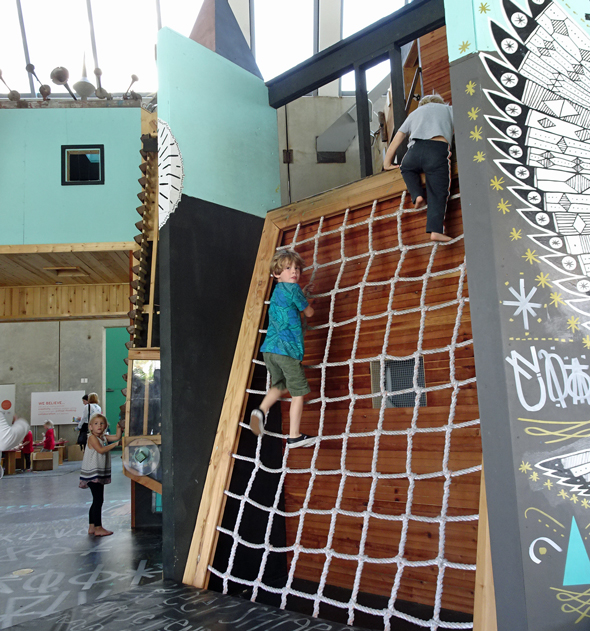 Leo did explore a few other areas of the museum, but the labyrinth was the winner today.

Dave, Leo and I returned to the hotel to find Lucy ready to start her day. We decided to walk to the USS Midway Museum - a decommissioned aircraft carrier docked just outside our hotel - for a tour. Dave and I had toured the USS Lexington in 2009 in Texas. To me (not experienced, unknowing, and married into an Air Force family), the ships seem very similar (though the USS Midway has an angled landing deck). 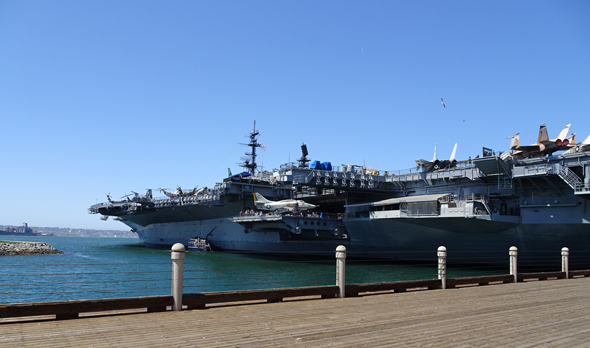 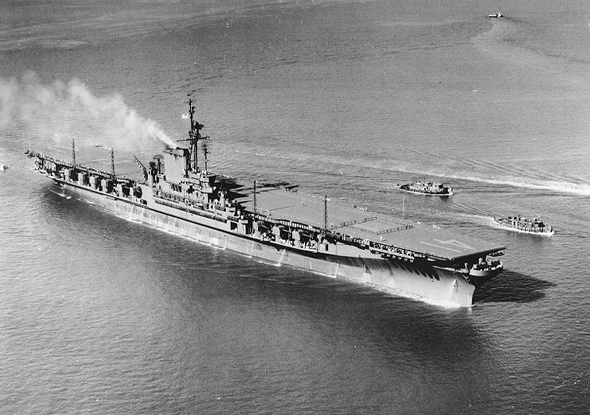 The USS Midway, as it was commissioned in 1945 - eight days after Japan surrendered in WWII.

We didn't know what to expect, bringing a 2 year old and a 5 year old onboard, but were pleasantly surprised to discover Lucy and Leo were fascinated with every aspect of the ship and both children enlisted in the US Navy this afternoon. (Lucy wants to sail on the USS Hello Kitty though, so not sure she will be accepted into the US military. Pretty sure the Hello Kitty is a Japanese ship?) The hangar bay deck is filled with cockpits for kids to "fly", so the Leo and Lucy had a blast posing for us in the aircraft on display. 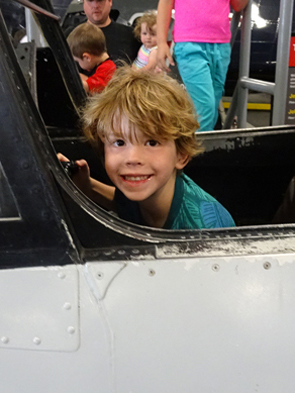 Leo and Lucy in various cockpits, plus Lucy (lower left) in an ejection seat (!)

After checking-out the hangar bay (a huge empty space below the landing deck, that can store 50-or-so planes, raised/lowered with massive hydraulic elevators), we went up-top to see where the planes land on an aircraft carrier. It is a massive, massive space! 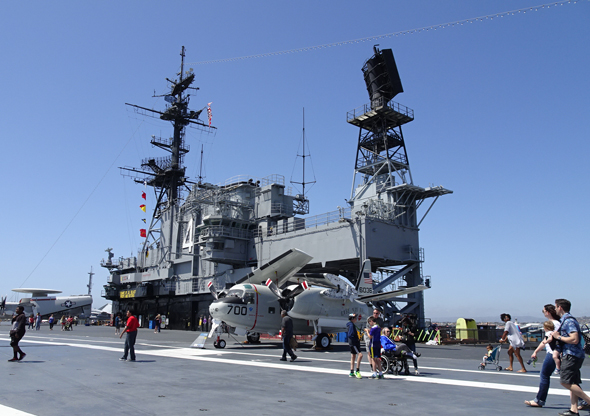 The USS Midway was built in Newport News and was deployed from 1945 until she became a museum in 1992. The USS Midway served all around the world (including Vietnam and Operation Desert Storm). The ship is nearly 1000 feet long and carries over 4000 crew members. 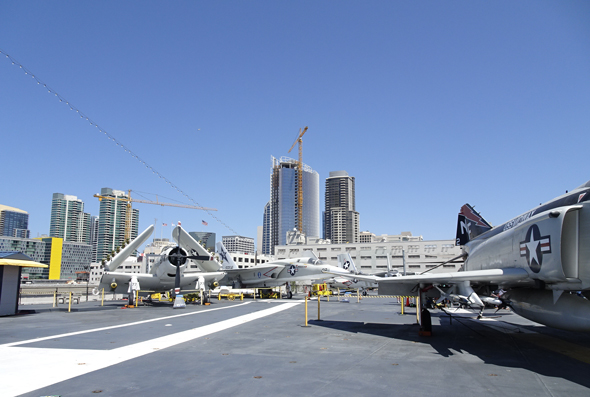 On the deck, with a view towards downtown San Diego 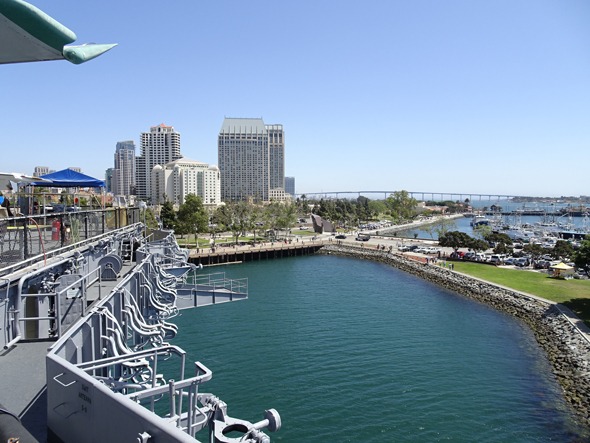 A view to our hotel and Seaport Village 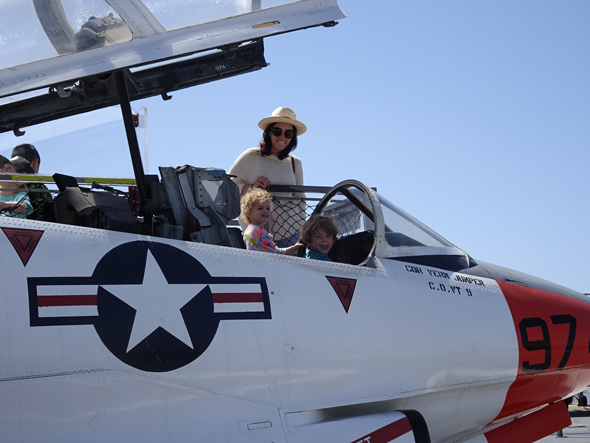 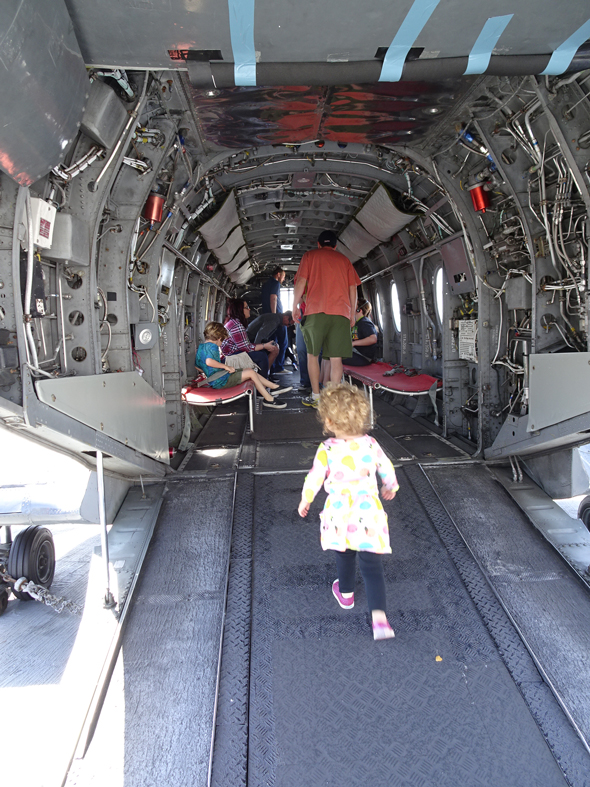 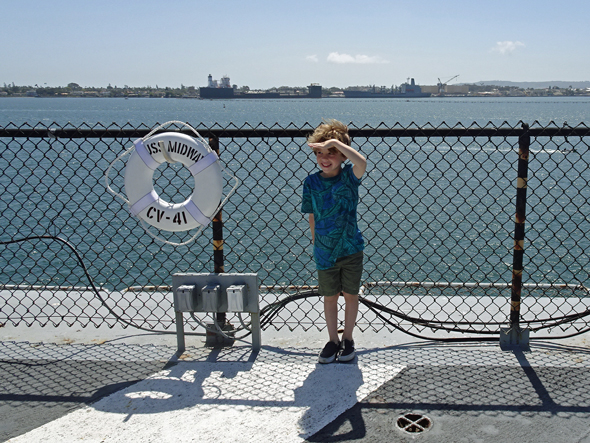 Since we were on an aircraft carrier, I sent a text message to My Favorite Top Gun Pilot, Duck track alum, Captain Smith. He answered immediately and told me to go see the "Hornet on the back end" because he flew it. Done. I scurried to the rear of the ship and asked a volunteer to point me to the Hornet because "I needed to take a photo for my friend who used to fly the Hornet"... but he volunteer only smiled and informed me: No, ma'am, only Top Gun pilots flew the Hornet. 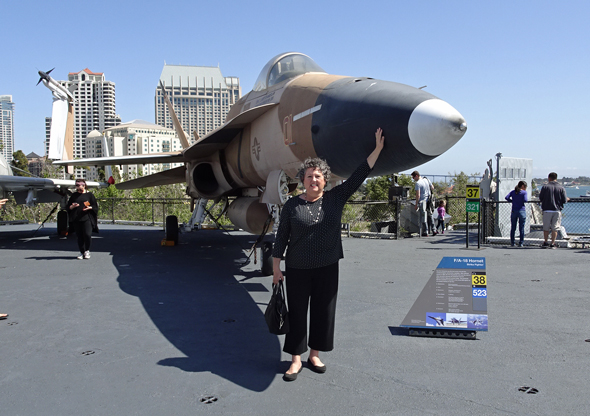 Next we went below deck, where the kids had an absolute blast exploring the living quarters. Bunks, bath houses, kitchens, dining rooms, barber shop, doctor offices and more. Poor Teeny Lucy could barely get over hatches - but she did and she didn't want any help, thank you very much. 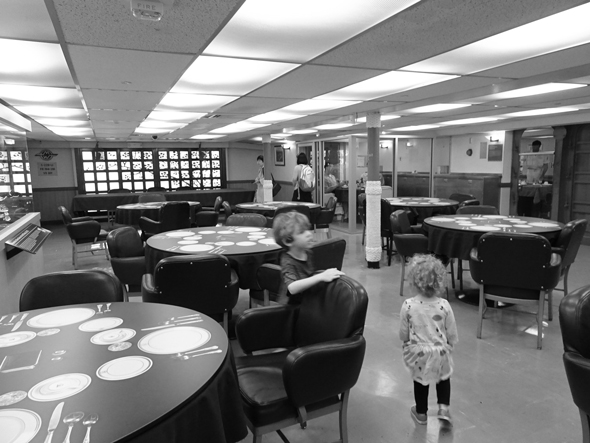 A dining hall on the USS Midway 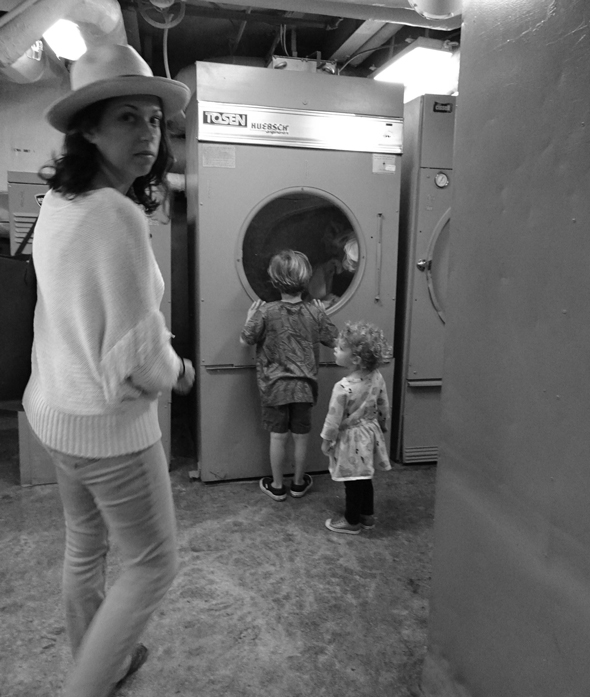 Lisa, pondering how she can get a massive washer and dryer installed at her house. 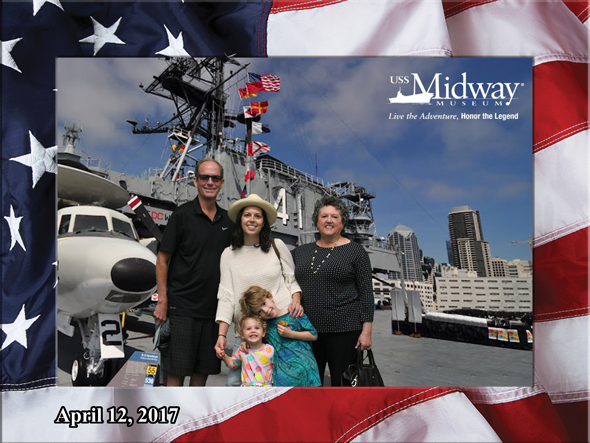 We bought the tourist photo!

After a wonderful afternoon touring through the USS Midway, we hired a pedi-cab to cycle us back to the hotel. 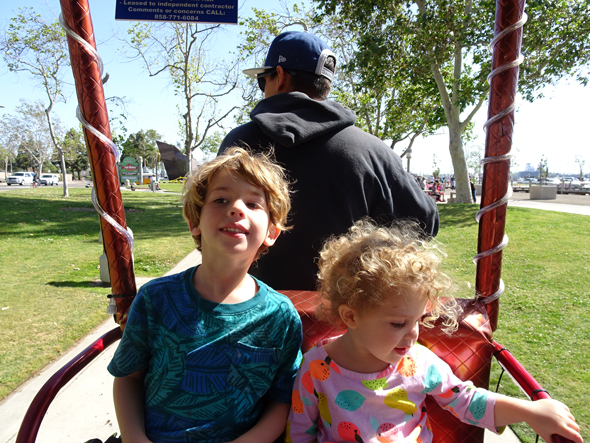 After a rest, we walked to the nearby Headquarters shopping and dining area along the marina. The Headquarters is the site of the original San Diego City jail, but has been repurposed/remodeled to house shops and restaurants... but they still kept a few jail cells to amuse the tourists. We are tourists. 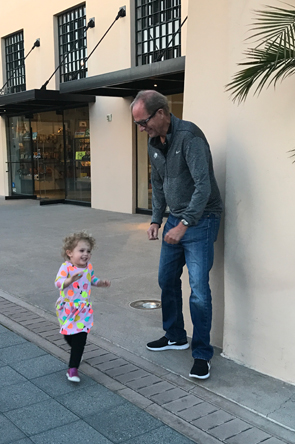 Leo and Lisa, incarcerated... and Dave giving Lucy a scare when she came around a corner.

We had dinner at a fun Mexican restaurant in the Headquarters, Puesto. Puesto is a hip taco joint. All tacos are served on blue corn tortillas. Everything we ordered (fish tacos, chicken tacos, mushroom tacos, cactus+zucchini tacos, guacamole, ceviche, market salad and grilled corn) was very good... as were the margaritas... and prices were reasonable. The restaurant was quite noisy, which we decided was a good thing when dining with small children. The kids were very well behaved - of course! Oddly, a mallard duck - very intent on his mate - followed her into the interior of the restaurant! They strolled around a few tables and then waddled off. 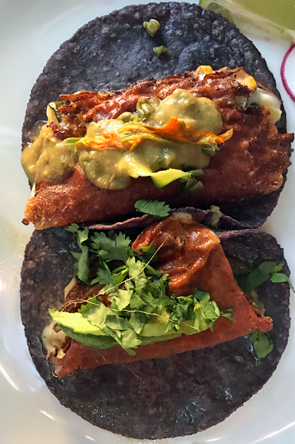 What a very busy day! More excitement tomorrow. Until my next update, I remain, your blogging Bubbe correspondent.
« The San Diego Zoo Water + Chocolate »