It has been a rip-roaring day here at Taylor Manor. So much going on. Organizing. Packing. Organizing. Cleaning. Organizing. Getting ready to hit the road for a month-long trip in our RV. Did I mention, we are getting organized?

The cleaning part? Almost didn't happen. Unbeknownst to us, our door bell is out of order. Apparently our housekeepers were on the front porch at 8:30a, ringing-away, but of course we did not hear them as it the bell is broken. They used a mobile phone to see if we were sleeping or something, but DT was on the phone (something about the Olympic Trials in 2012). Plus, we seem to be the only people in western society without call-waiting.

We did have call-waiting when we had a teenage girl in the house, but we haven't had a teenage girl in the house since 1999. I'm saving $3 a month ($396 since 1999), people! That's a tank of diesel! The housekeepers came back later in the morning so we are no longer in fear of the Health Department shutting us down - thank you Jeannine & Tara. By the way... I repaired the doorbell. 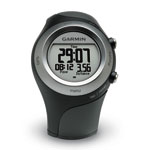 In other exciting (to me) news, DT bought me a new toy. He gave me a Garmin Forerunner 405 GPS watch. Why? Not sure, but I think anything that keeps me pounding the pavement is a good thing and I just love gadgets (I inherited the gadget-obsession from My Dad). Plus, Dave will use it too. What does this watch do (besides tell time)? We bought only the basic version. (You can buy GPS watches that have heart-rate monitors, attachments that can track your swim and bike-mileage.) The Garmin Forerunner 405 is bare-bones. It tracks your mileage, pace, route and - my favorite - elevation change. After poring over the instruction manual and charging the (rechargeable) battery, I headed out on the most difficult run in town - leaving our front porch and running 3 miles on steep Cooper Mountain. Stupidly, I tackled this run at one o'clock this afternoon in 85-degree heat. I won't be able to walk tomorrow.

But, when I came home, the watch sent my workout data to my laptop - WIRELESSLY - and I was able to see my route, pace (think snail) and altitude change. DT had clocked a 3-mile route in the car a few days ago for me. When I returned the Garmin Forerunner 405 gave my distance as 2.99 miles. Pretty dang close! The altitude change was shocking - nearly 600 feet climb in 1.5 miles. Not fun. Not fun at all. What was fun? I could look at my route on Google Earth. Marvelous!

Until my next update, I remain, your Advil-taking correspondent.

« Chickpea Curry with Cilantro News Around the Island »