Portland, Oregon:  Dear Reader, Oregon is on fire. Literally burning up. The latest disaster was started this weekend by out-of-state kids lighting fire crackers along one of the popular hiking trails in the Columbia River Gorge. Who would even think to light a match in a forest in September? The little idiot has been apprehended, but no matter. The fire is burning out of control along one of the most beautiful places in America. The fire has spread to over 10,000 acres in only two days.

And you know how you hear about fires "jumping" rivers or freeways or fire-breaks? This fire jumped the Columbia River last night and started another blaze in the Great State of Washington. People, the Mighty Columbia is nearly ONE MILE WIDE at this location! The fire so fierce, embers carried over the Columbia River - the river of the Nez Perce, Umatilla, Warm Springs and Yakama tribes, and explored by Captain Gray and Lewis & Clark.

As you can see from the smoke at the end of the above video - just 30 miles or so from the Portland Metro area - we can't see more than a city block in Portland. White ash covers everything. People venturing outdoor wear masks.

If you told me - EVER - that Oregonians were praying for rain, I would laugh. Not now. I am praying. Please join me.

Today was the Big Day - the day the bandages came off after Dave's meniscus surgery Friday. Everything looked great. Very little swelling and two small puncture wounds. Now both knees match (except I have to really really look to find the scars from his February surgery). Dave is still icing and doing his PT, but is walking around the house without a cane on his skinny-runner legs. I will accompany him to his follow-up appointment Thursday and report then. Thank you all, again, for the kind emails we have received.

Tonight's vegan repast was an old standby and a favorite recipe on my little blog - Potato Tacos - because it combines two of my favorite foods (potatoes and tacos). There is nothing to change-up in this recipe to make it vegan. It is always vegan. It is always delicious, inexpensive and easy. 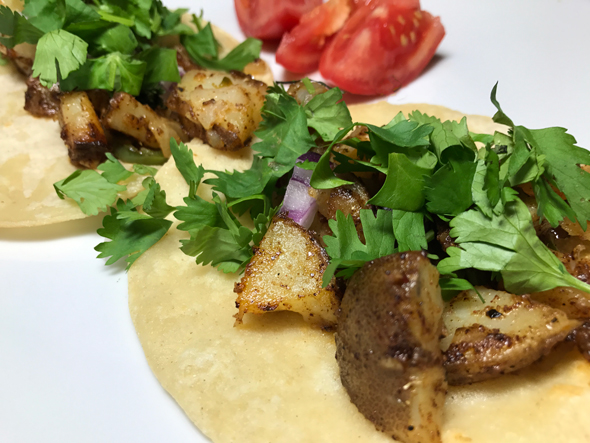 While baking the zucchini and summer squash gratins last night, I baked a few potatoes for dinner tonight. The tacos came together in just a few minutes. 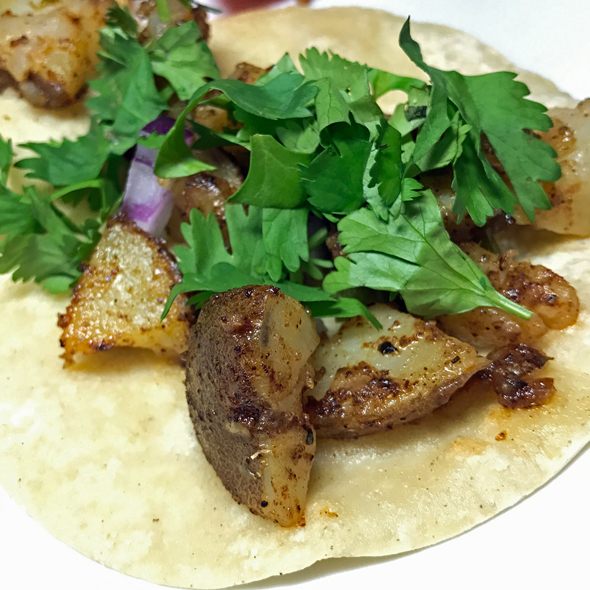 At cocktail time, I served guacamole (purchased from the deli at New Seasons Market), salsa and chips. Later, we enjoyed the potato tacos, and with plenty of spicy potatoes left over, breakfast/brunch/lunch is ready for tomorrow. Potato Tacos are delicious served with a tomato salad, orange slices or a chunk of watermelon.