We slept-in because we were up half the night with a freakish wind storm. I am not exactly sure of the precise wind speed, but let's just say we were bringing-in awnings (thankfully they are all on remote control) in the middle of the night and trying to sleep through the noise. This area is known for wind (thus, all the wind mills producing power at the mouth of the valley). Since arriving to Indio, it has been freakishly wind-free. We knew it wouldn't be long... but after a few hours of blustering... at 4 o'clock this morning, Mother Nature turned the wind dial down to BREEZY, and we had a few hours sleep before our morning jogs.

But our exercise this morning was for nothing. We met friends (it seems half of Oregon is in Palm Springs this week) at Sherman's Deli for lunch. Any calories we burned on our runs were cancelled-out ten-fold. Lisa suggested it would have been better to run to Sherman's. 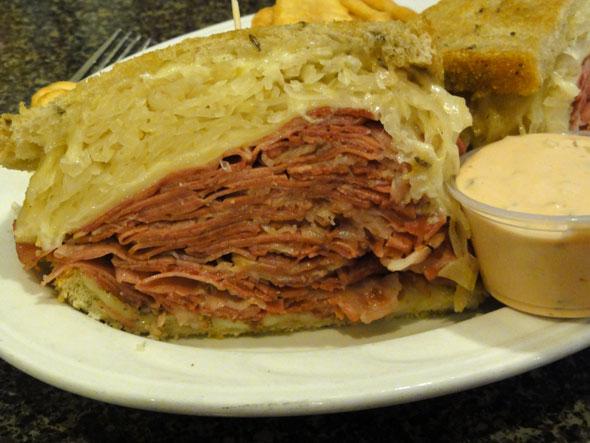 This is the grilled Reuben sandwich - with corned beef. I could only eat half and I had to use a knife and fork. 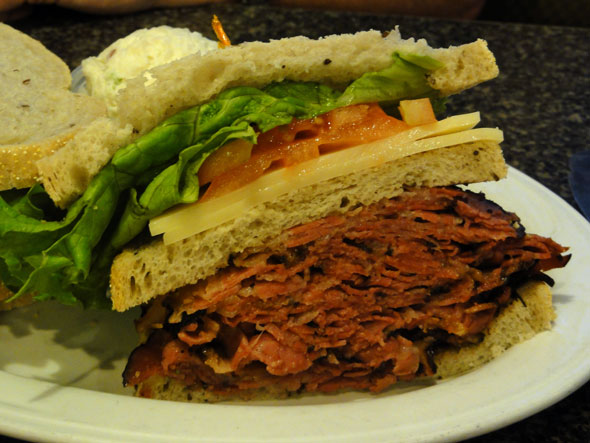 This is Sherman's pastrami.

Even though we brought home half our sandwiches, you will not be surprised we did not have dinner tonight. Has anyone ever finished a sandwich at Sherman's? If so, please leave your comment below and give a detailed explanation.

This evening, after Tebowing, we watched the Duck basketball team lose to Cal-Berkeley. The Ducks really stunk it up at home. However, the half-time show was going to be amazing, so I sent my local reporter/photographer, Mary, on special assignment to the Matt Knight Arena to capture the excitement.

In a promotion for the upcoming Olympic Track & Field Trials in Eugene, ex-Duck football, track and basketball star, Jordan Kent, had a dunk off with high jump World Champion Jesse Williams during half-time. 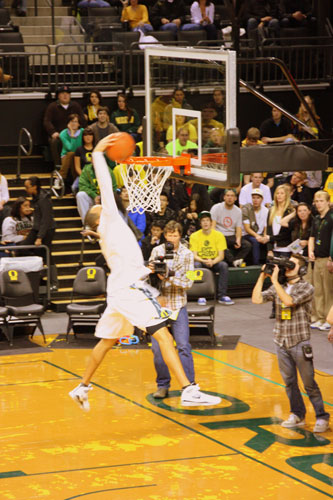 Photo by Mary Though only six feet tall, Jesse Williams (age 28) is the best high jumper in the entire world. Jesse competes for the Oregon Track Club and is a USC alum. Jesse Williams was our guest at the Best. Tailgate. Ever. in October. 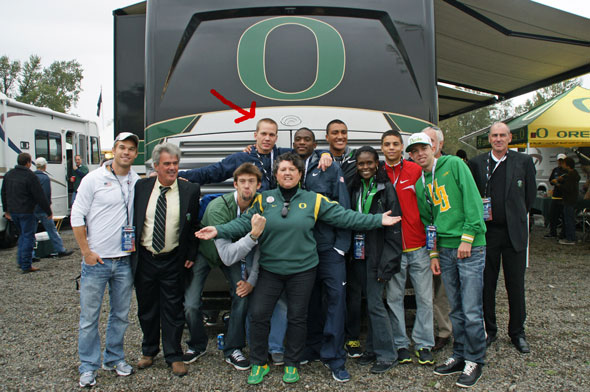 Jesse is the the tall guy with the red arrow pointed into his head. (I am the short, fat, old lady front and center. I may be short, fat and old, but I was in heaven!) 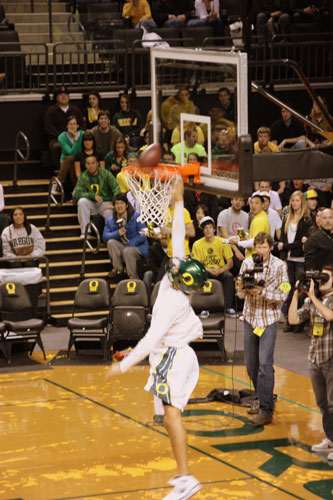 Jordan Kent did a trick shot, using a football while wearing a football helmet. Kent played football for several years for the Seattle Seahawks. 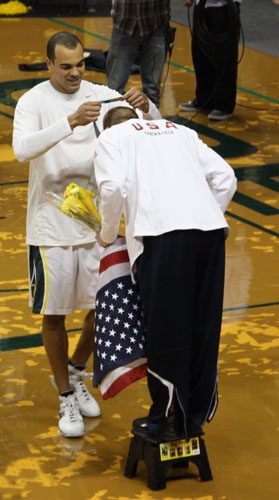 Jesse Williams won the slam-dunk-o-palooza. Jordan presented Jesse with the gold medal. Interestingly enough, we have the same collapsible podium/step stool in our RV! The next time I use the step to reach a pot/pan, I expect DT to put a gold medal around my neck. 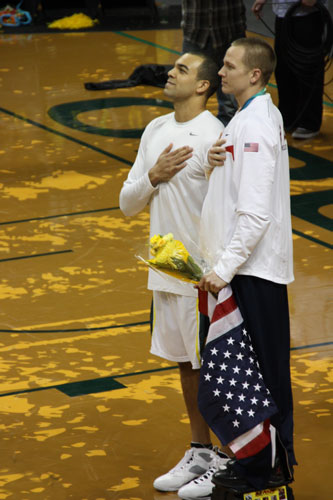 A medal ceremony isn't complete without the national anthem! Such fun. Do you have your tickets to the US Olympic Track & Field Trials? Plan your trip to Track Town USA now.

Special thanks to Mary for her photographic skills tonight!

One last thing... the Cutest Baby Ever:

Until my next update, I remain, your dunked correspondent.