Track Town, USA:  Hello from the Road! Okay... so "the road" is I-5 and we are only 100 miles south of our home for another football game in Eugene, Oregon. But, we are in our RV, which beats any day at home! We left the house at 9 o'clock this morning to get to Eugene in time for our appointment at Cummins Coach Care. They needed to look at our dash air conditioning... which for some strange reason is in the very rear of the bus - 45 feet from the dash. Last week, when we drove to Eugene for the Nevada game, the temperatures were hovering in the high 90s. Our dash air conditioner was not working. Remember that we had to stop for an hour due to a road-side brush fire? It was H-O-T! Driving south, the sun was beating down on our huge wind screen. Once we reached our campsite in Eugene last Friday, our tech came to have a look. Brian said we had a leak in our air conditioning unit. Brian was right. 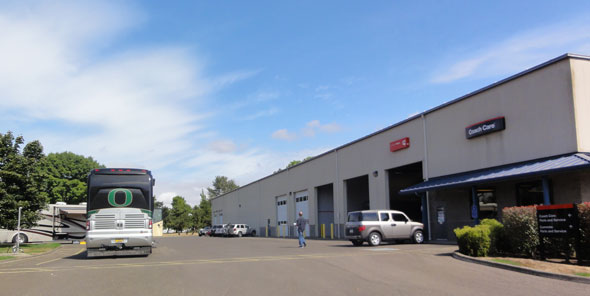 Which found us at Cummins Coach Care late this morning - and temperatures in the mid-60s - where the technicians took the Magna Peregrinus into their service bays to fix her leaky hose.

After leaving our RV with Cummins, we headed out in search of food. We wanted to try a fish & chips place near the Oregon Track Club office, so we headed to Newman's Fish Company for lunch. 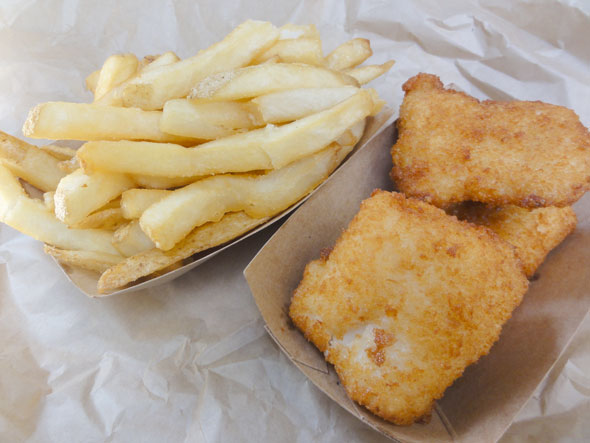 Newman's Fish Company buys fresh fish from Oregon coast fishermen and sells the fish in several locations throughout the Willamette Valley - and they also vend cooked fish at three Oregon restaurants. The fish is very delicious and the batter is so light and crunchy (versus soggy and gummy). DT and I were so happy with our meals!

PS: only sampled the fries!

And then - after excessively exercising and eating healthy, light, vegan meals for the past three days at home - we fell off the health-food wagon seriously by not only eating deep-fried fish - but... next door to Newman's Fish & Chips was a Ben & Jerry's ice cream shop.

I can't help it if they are now serving Schweddy Balls at Ben & Jerry's! 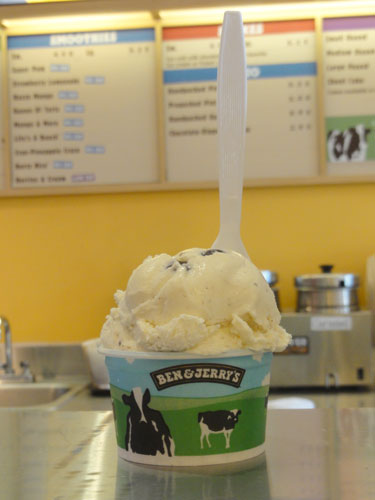 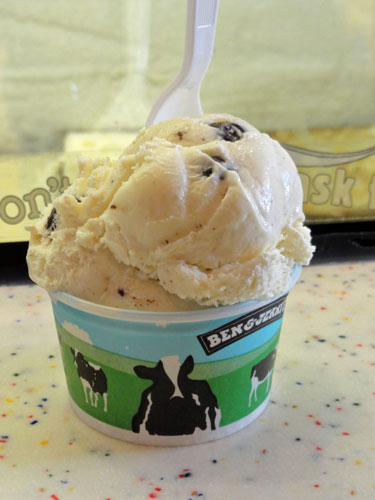 Thing is... when you put one of the chocolate morsels in your mouth, you never know if it is going to be a malt ball or a rum ball.

Speaking of Ben & Jerry... did you know DT and I visited their headquarters in Vermont in 2004? Check it out!

After sampling the new flavor, we asked the clerk at Ben & Jerry's to hand-pack a pint of Schweddy Balls and schlepped it over to our friend, Rob, at the Oregon Track Club office. The entire office was glued to a computer screen, watching ex-Duck runner Galen Rupp as he broke the American Record for 10,000 meters (approx. 6 miles) with a time of 26:28 (that's 4:18 per mile, people!). So exciting! Rupp raced in Brussels, Belgium and placed third behind two African racers. This was huge news in American track & field today. His coach, Alberto Salazar, was DT's teammate at the University of Oregon. GO DUCKS! 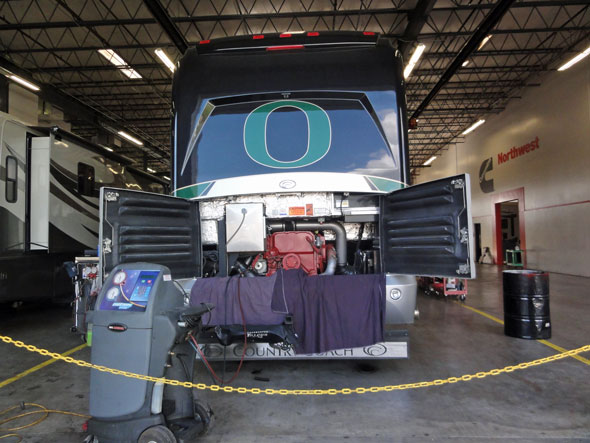 We arrived back at Cummins Northwest to find our RV in the final stages of repair. The techs were testing the pressure in the new hose. The hose was holding perfect pressure, so they filled the system back up with coolant (freon?) and we were on our way.

Tomorrow the Ducks face the Missouri State Bears at Autzen Stadium at 12:30p pacific. Not sure if this exciting match-up will be on your local television listings, but we will be there. Dave and I are hosting the tailgate this week, which means we I have been busy cooking foods for 30-ish guests brunch and dinner.

Until my next update, I remain, your schweddy correspondent.
« New Seasons Market Missouri State »