TrackTown, USA: Dave and I had a very long day in Eugene. After exercising, Dave had a meeting on campus with the committee organizing the 2016 World Indoor Track & Field Championships. This event will be held in Portland, Oregon and DT is actively involved.

Dave walked from our hotel to the meeting and asked me to fetch him with the car at 11:30a. Imagine my excitement when Dave walked over to the car with Moroccan distance legend Hicham El Guerrouj! El Guerrouj (pronounced ger-OOSH) is the world record holder in the mile and 1500m. I should say, he is still the world record holder in these events as no one has been able to best him since he set the records in 1999.

El Guerrouj needed a ride - we were all attending a memorial service for Marol Dellinger - the much-beloved wife of Dave's college coach, Bill Dellinger - who passed away a few weeks ago.

The service was not a somber occasion. Everyone loved Mrs. Dellinger and many of Bill's athletes stepped-up to the microphone and recounted stories of how she made them feel so at home when they arrived to run for the University of Oregon. Her family told loving stories, a band played her favorite songs. Everyone cried and everyone laughed. 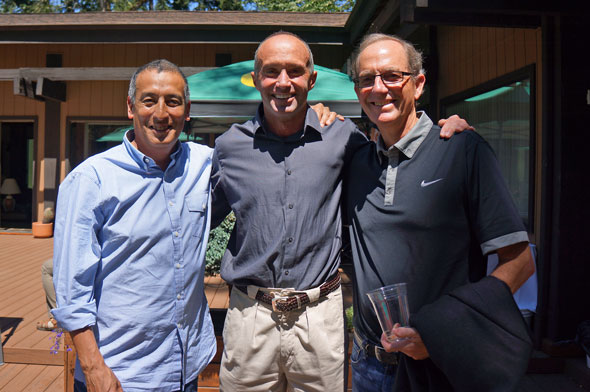 After the service, we headed back to the track to watch the Youth of the World race. It was a long, hot afternoon, followed by a few events for professional athletes.

Dustin, with Elijah Greer on his heels

Dustin powered through the anchor leg on the International 4x800m relay team. Dustin runs for for Israel and his teammates were from Mexico, Uganda and Kenya.

We also knew several ex-Duck runners who returned to race the 1500m. 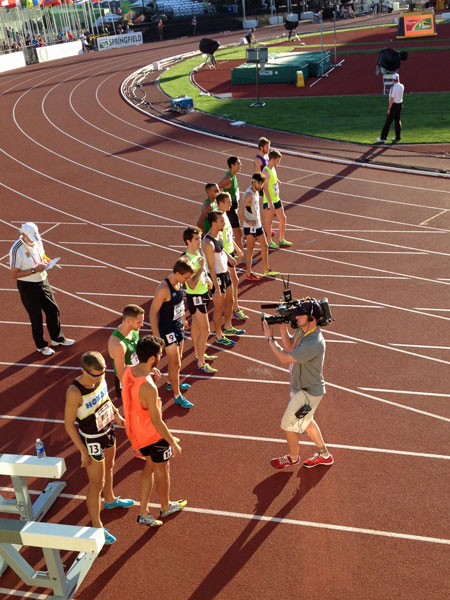 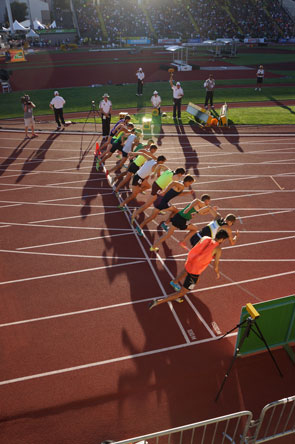 AJ Acosta before the start of the 1500m 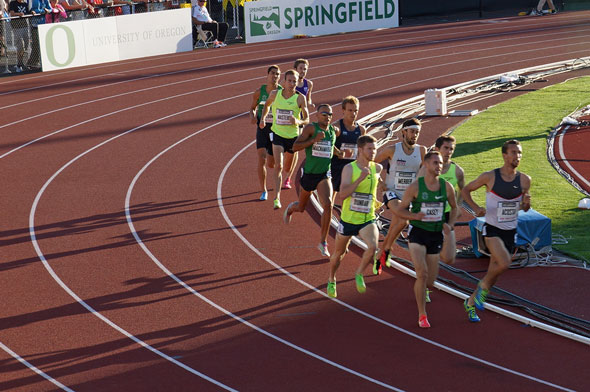 After the races, we walked to dinner with our friends, Jules, Gary and Josiah... and later walked to a local hang-out and met-up with Dustin and all those wonderful ex-Oregon milers! 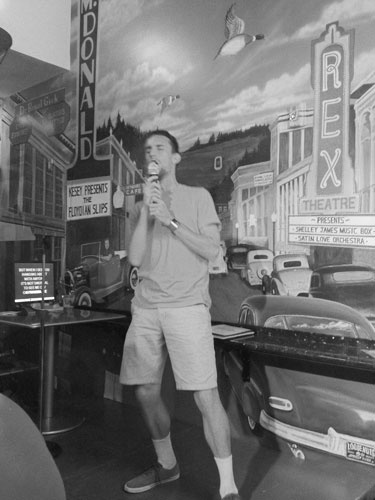 Which is how I was able to snap this photo of AJ singing karaoke.

Until my next update, I remain, your bar-hopping correspondent.
« IAAF World Junior Championships Runners »