Merced, California: While the family has gathered to celebrate DT's birthday and watch Brother Bill's band play at a music festival, we are also together for the interment of Uncle Charlie ashes. Charlie passed away a year ago in New York. The service was held at the San Joaquin Valley National Cemetery in Santa Nella. This is the first time I have attended a military service and it is quite a precise ceremony. As many services are held daily at the National Cemetery, everything needs to remain organized. Beyond the service (readings, singing, etc.) the family includes during the funeral, the military provides an honor guard, three-gun salute, flag-folding ceremony and a soldier plays taps on a bugle. It is a very moving experience and a proper honor for our veterans. 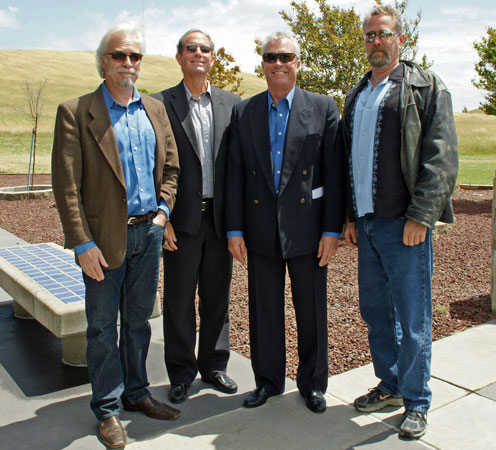 The little towns of Santa Nella and Gustine seem to survive by servicing the needs of the steady-stream of people attending funeral services at the San Joaquin Valley National Cemetery. Motels. Gas stations. Fast-food chains - and one very famous restaurant: Pea Soup Andersen's. 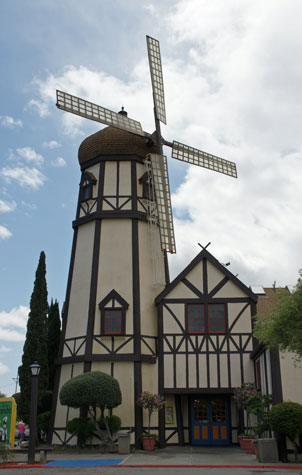 A massive eatery, Pea Soup Andersen's has several large private rooms where families can dine after funeral services. Our group of 26 had a large room in the back of the restaurant, with four large tables. Of course, most everyone ordered pea soup. 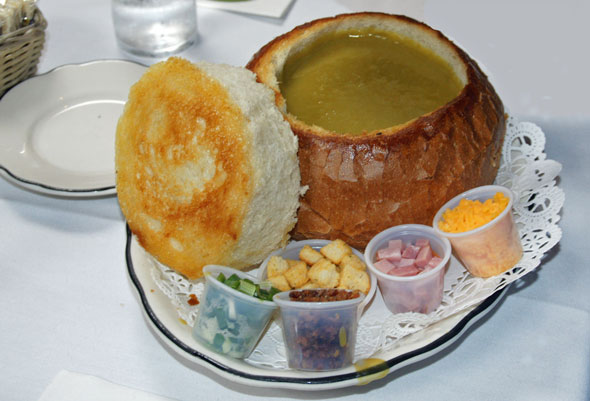 The soup can be ordered by the cup, bowl - or in a bread bowl! Toppings include green onion, bacon bits, croutons, diced ham and cheddar cheese. 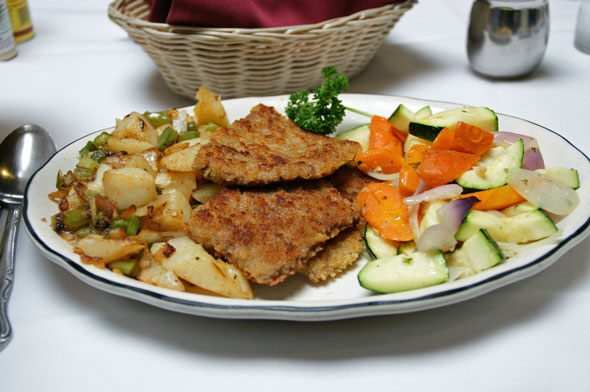 Pea Soup Andersen also offers other Dutch delights. Hmmm, do you know anyone who just loves veal cutlets? (The potatoes, fried with onions and green peppers were dreamy.) (The steamed vegetables were... steamed vegetables.) 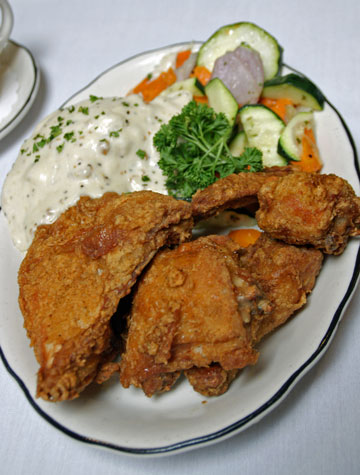 And they are also famous for their fried chicken.

On the way back to Merced, a few of the brothers made a stop to Wolfsen's Meat & Sausage in downtown Gustine. 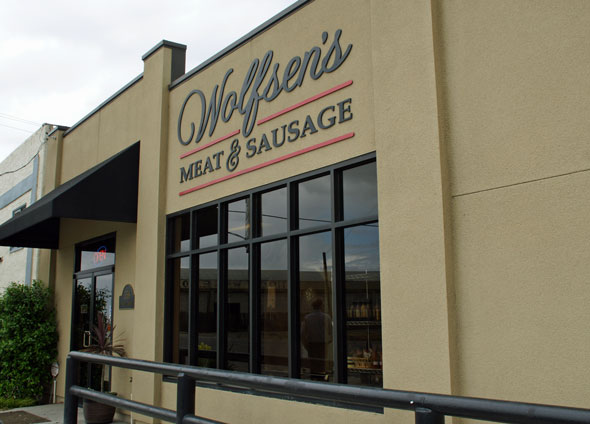 Wolfsen's Meat & Sausage makes over 60 different varieties of sausage, using chicken, pork, lamb and beef. They are also a regular butcher shop, selling every cut imaginable. Today, we purchased a few sausages for our freezer, including a chicken-fig-almond-gorgonzola that sounded too interesting to pass-up. 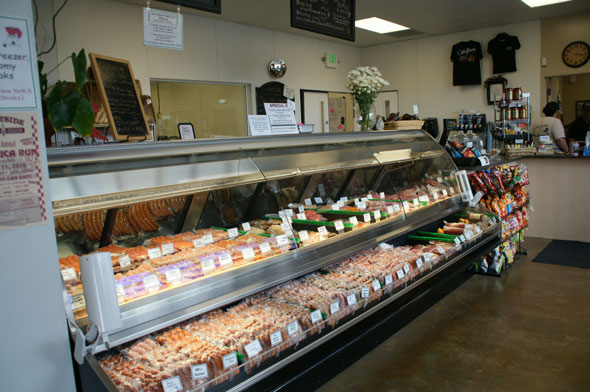 You can imagine, it is a bit difficult to make a decision at Wolfsen's.

The drive from Merced to Santa Nella is through miles after mile of almond orchards. The San Joaquin Valley has received a lot of rain this spring and everything is so green. Wildflowers are everywhere. 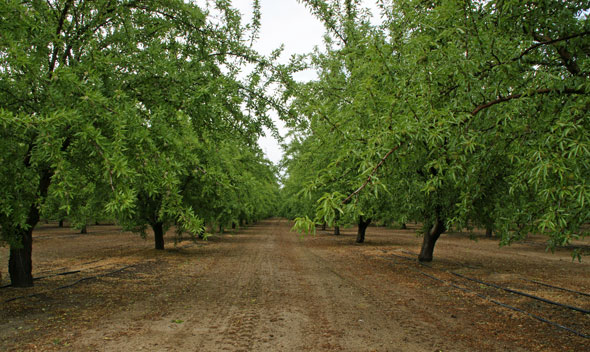 Neat and tidy, almond trees are very pretty in April. 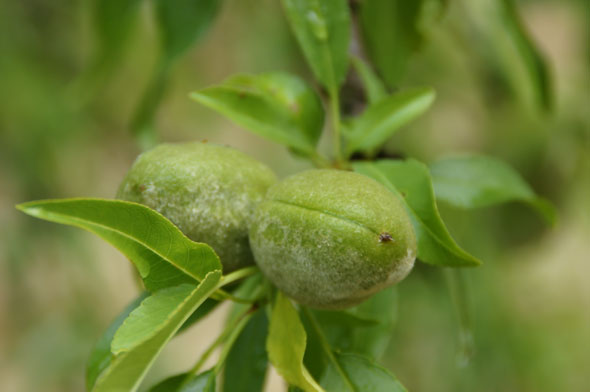 The trees are bursting with olive-size fruit. 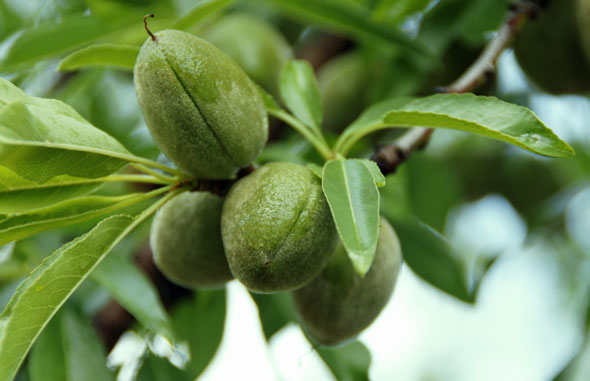 Green in spring, after harvesting that green shell will dry into the familiar beige, cavity-filled almond shell. 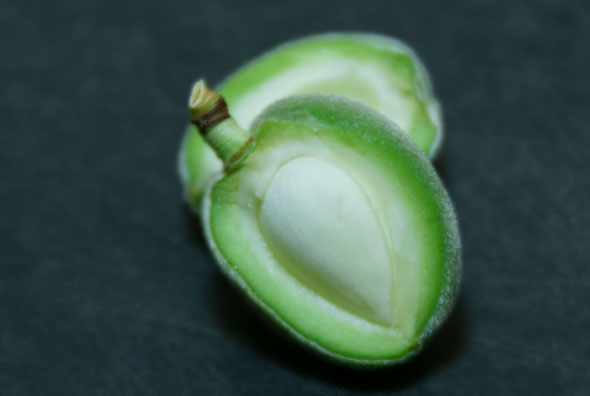 If someone were to steal pilfer pick an almond from a tree and sliced it open in April, this is what they would find inside. Called a green almond, they are a gourmet treat for a few weeks in the spring.

Until my next update, I remain, your criminal correspondent.

RV Park:  Castle Air Museum Family Camp (in Atwater, California). The only game in town. We always stay here. It actually used to be a parking lot - but the Air Museum added eight 50-amp full-hookup campsites. It floods during a rainstorm. No bath house. No wifi. We love it here. Dogs allowed off-leash. Very casual. Quiet.
« Roses, Cousins and Birthdays Street Rods »