Los Angeles, California: When I last updated, we had just arrived to Los Angeles and had celebrated the last night of Hanukkah with the kids. Five seconds later, everything switched to focus on the Rose Bowl. Lisa and Lenny once again offered to host our friends for an early New Year's Eve bash (6-9p) - early, so everyone would be fresh for the big football game in the morning.

Lisa (I helped a little) put out a deluxe spread of tasty treats: 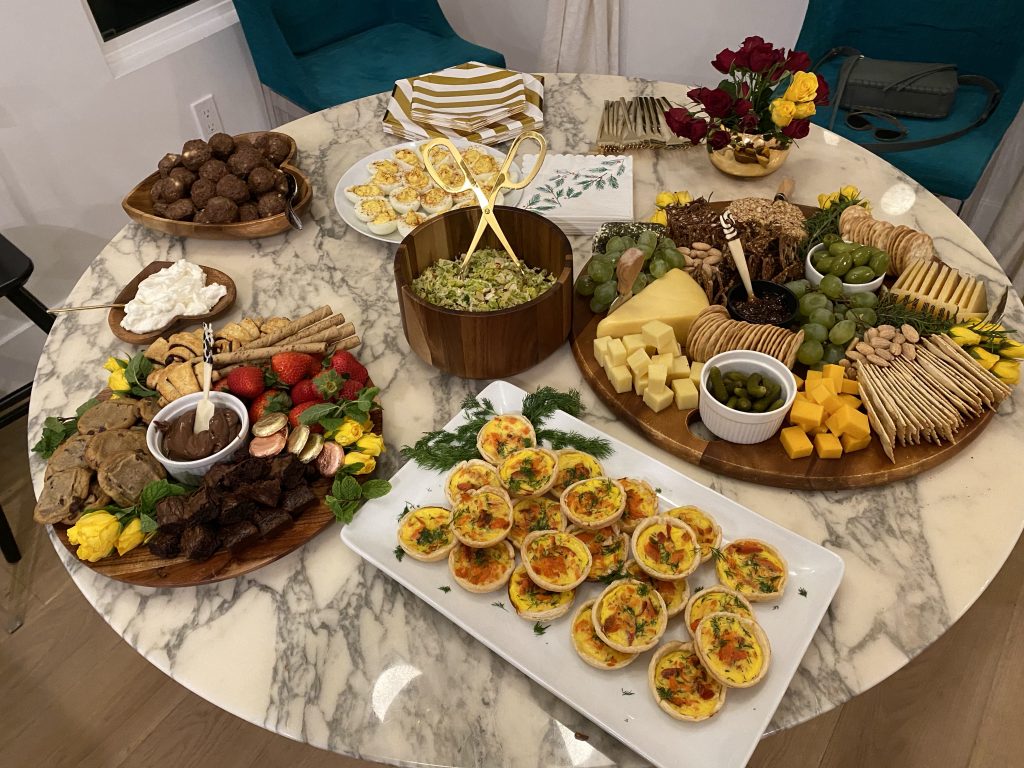 I made the smoked salmon and dill quiches (bottom center), and brought everything for the cheese board. Lisa made the deviled eggs, Impossible meatballs, shaved Brussels sprout salad... and I snapped this photo too early to include miniature latkes with creme fraiche and caviar! Bad Momma.

Red and Marcia flew in from Chicago for the game. 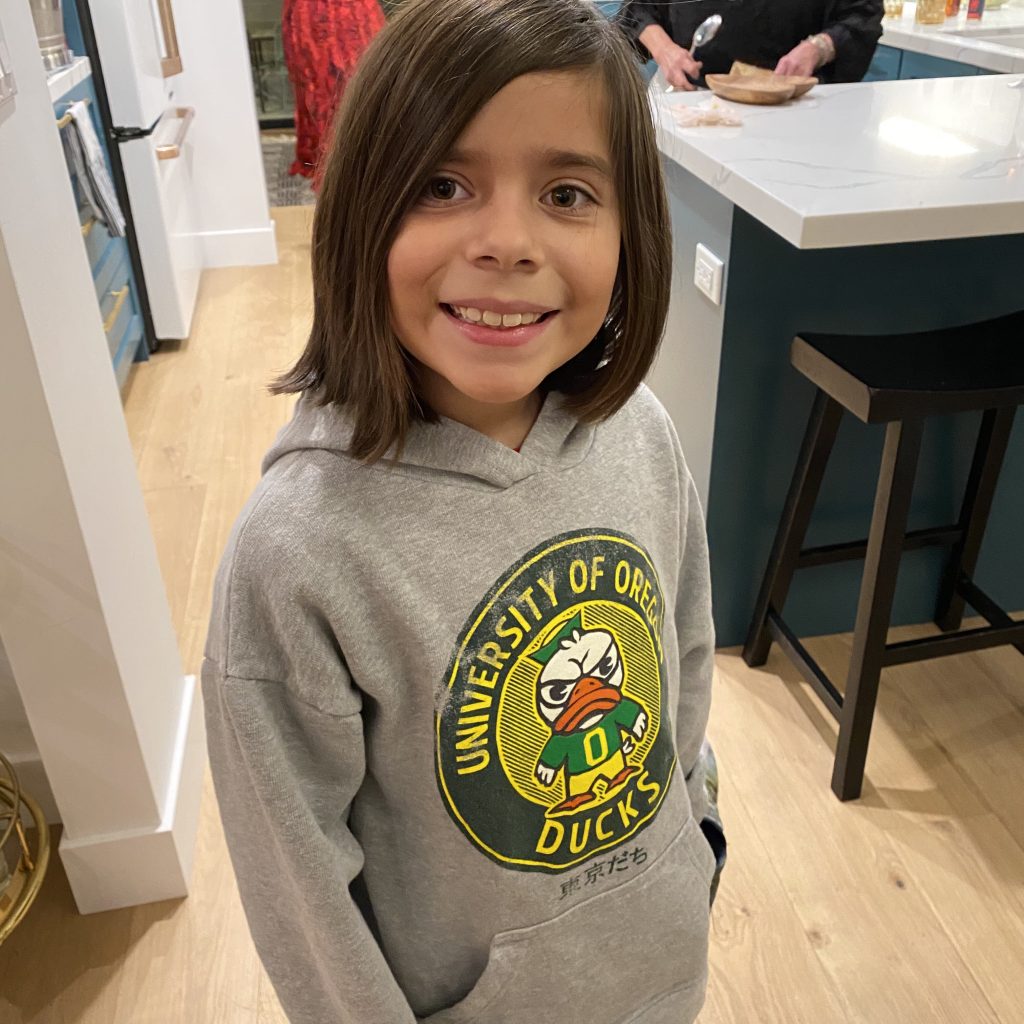 Rina arrived from the next neighborhood - and she brought me a massive box of Godiva chocolates! 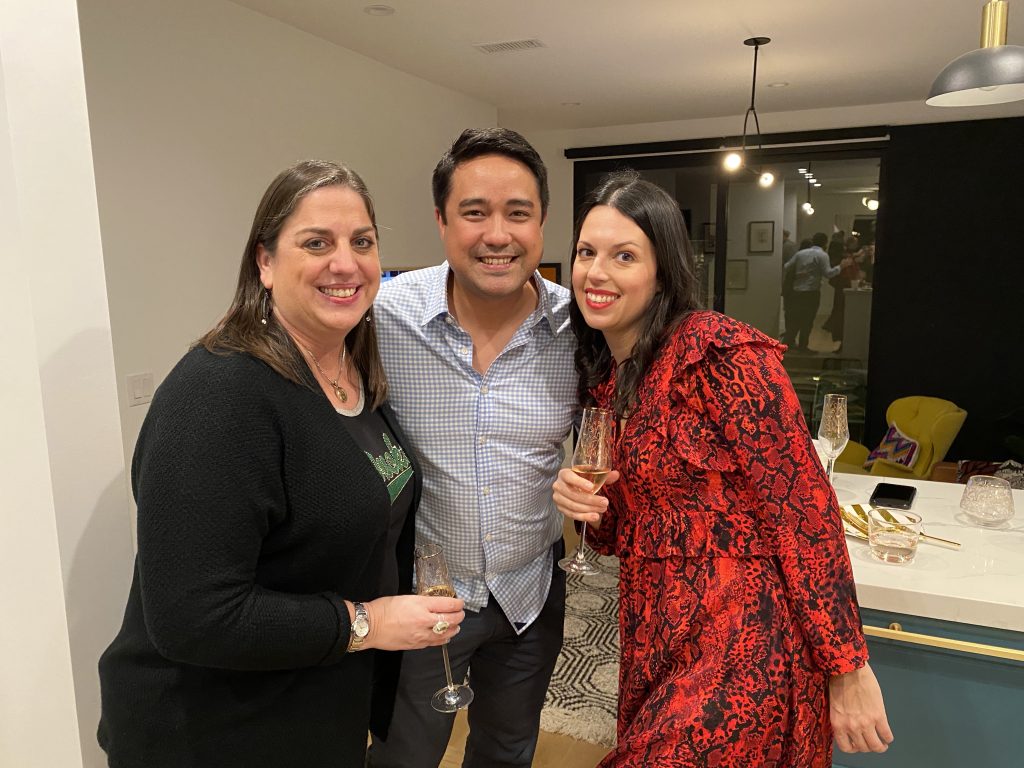 Julie and Ricky flew down from Portland, and posed with the Lovely Lisa. 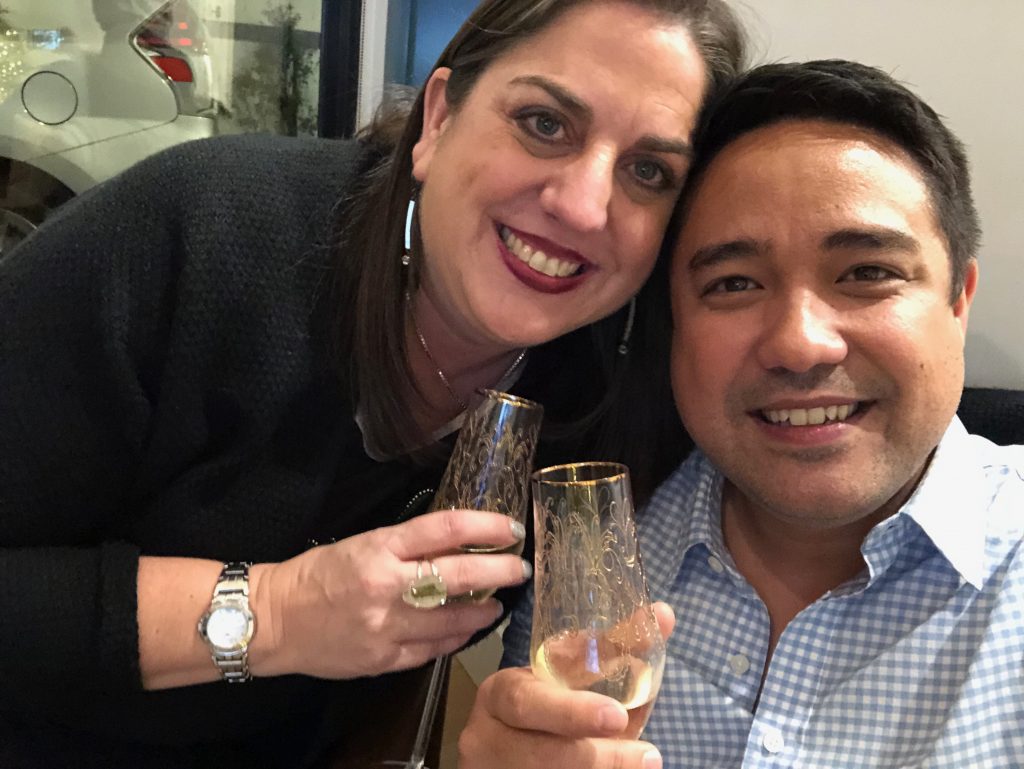 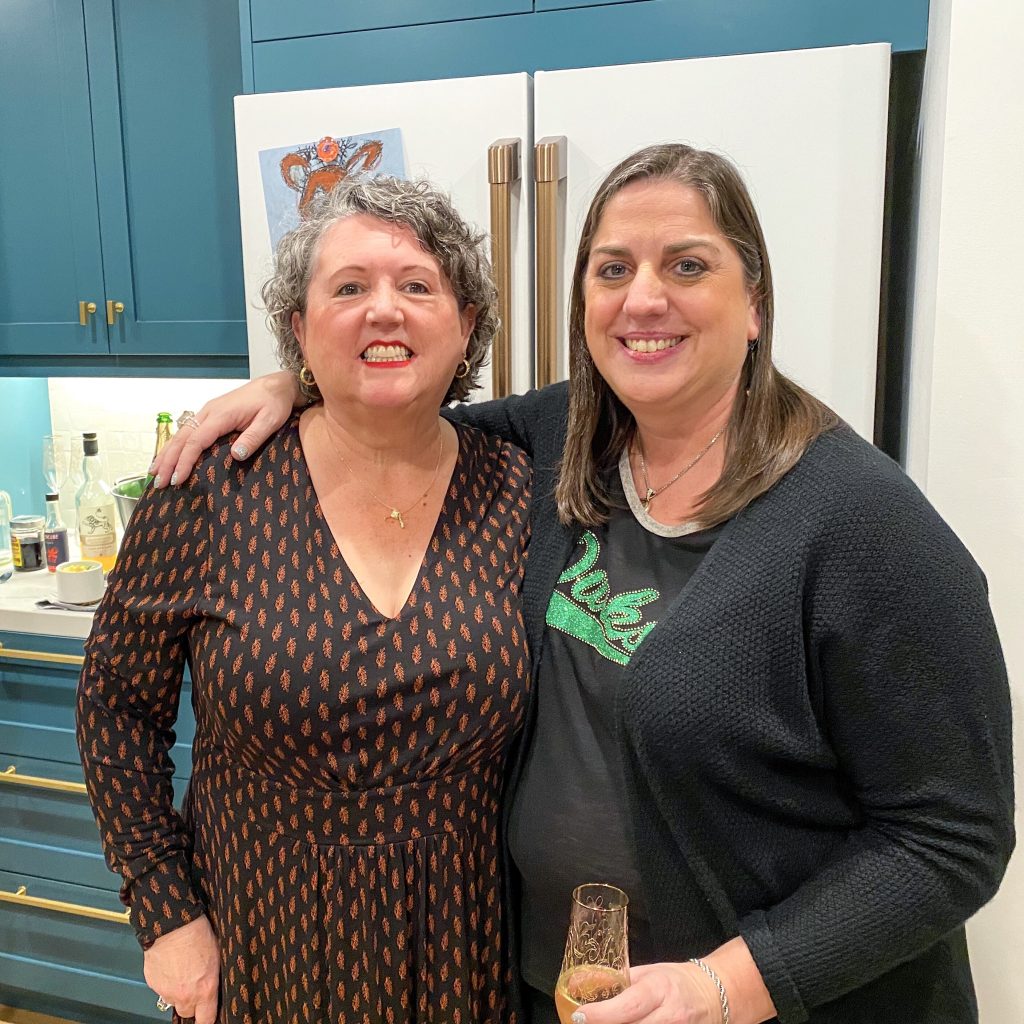 Julie, posing with me.

Since Lucy is a bit croupy and needs to use a nebulizer every 4-6 hours, it was just fine that I martyred myself to remain home with her while everyone else (DT had 12 tickets) went to the Rose Bowl. It was on television.

Everyone met at Lisa and Lenny's house this morning (at 8:45a!) to caravan to the game. This early hour seemed a bit ridiculous to me, but apparently if you do not arrive to the Rose Bowl parking area by ten o'clock, you risk being shut-out. (No matter that they had purchased parking passes and if you pay for a parking pass, wouldn't that guarantee a parking spot? Is this a good time to mention that they left here at 8:45a for a game starting at 2p?)

Lucy and I had a LOT of time to kill today. She snoozed a bit on the sofa watching the Rose Bowl Parade, while I finished-up post-party clean-up detail. We watched a cartoon movie, and then drew (and colored) a 12-page book about the party last night and football game today for Lisa. Somehow a menorah and a turkey made the book as well. I baked mac & cheese for her lunch (then more clean-up) and suddenly it was time for the game. Lucy watched a bit of the game with me, but retreated to her dolls for much of the second half. 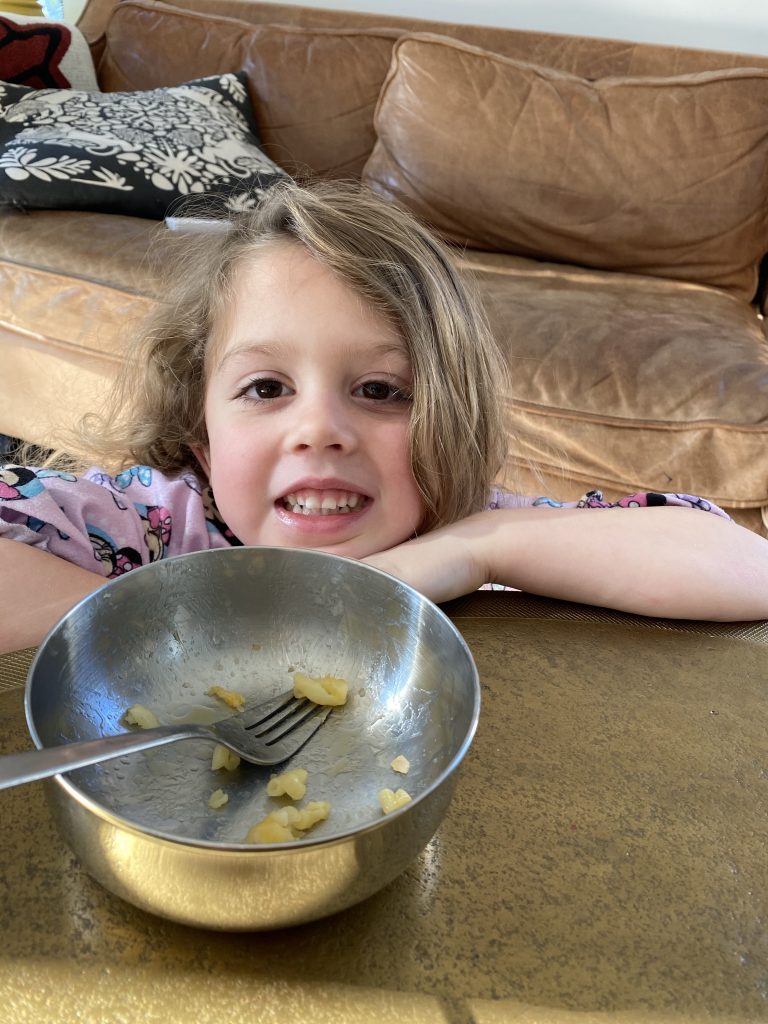 Mac & cheese in your jammies is the perfect way to celebrate a new year. 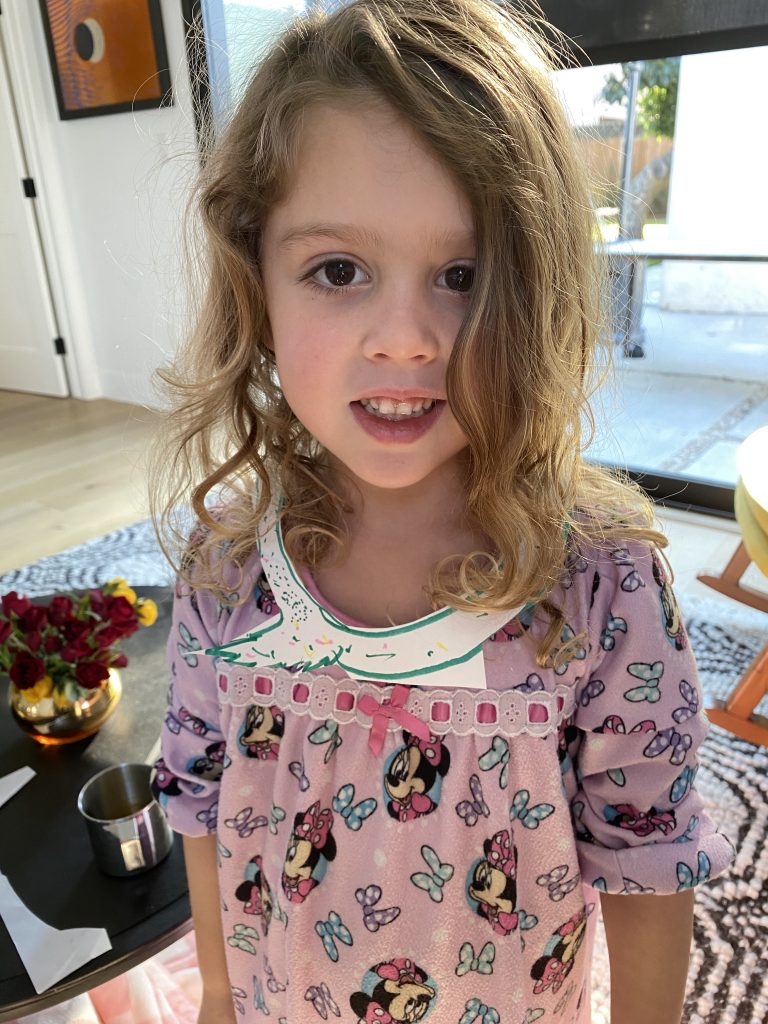 We made scarves from paper. 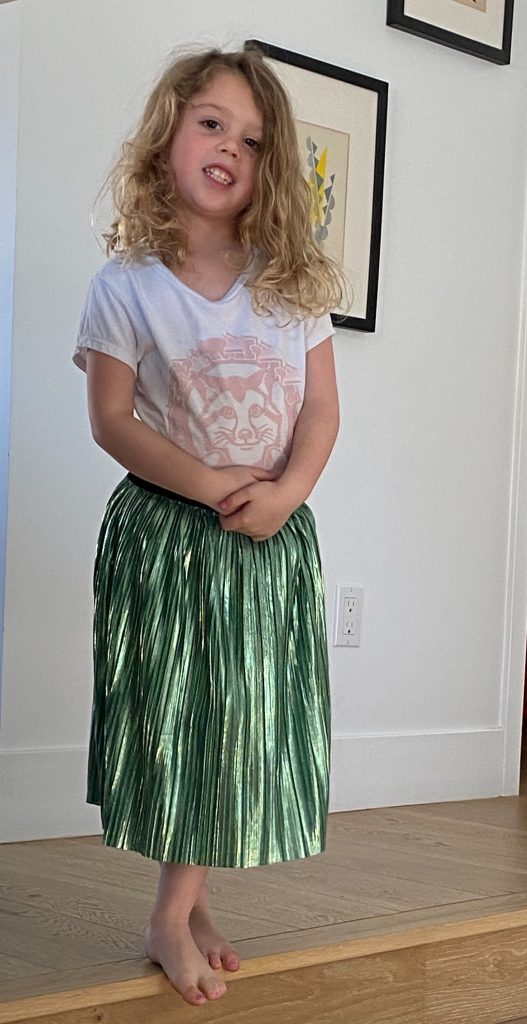 And she dressed in green prior to kickoff... 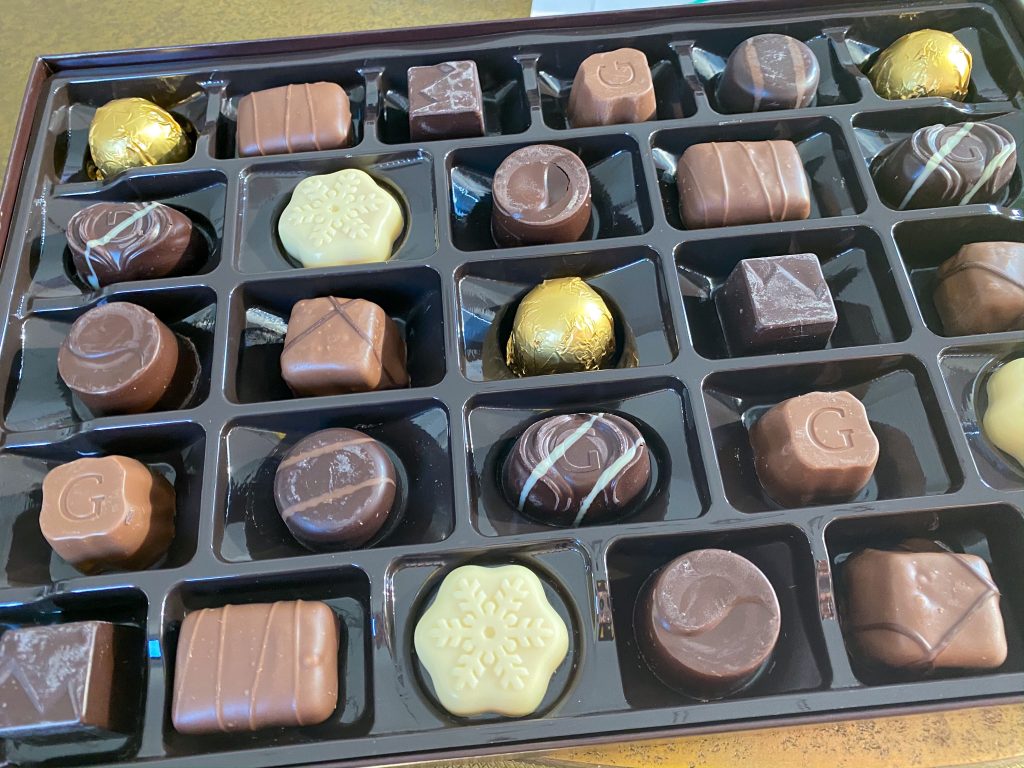 And post making a few choice selections from the Godiva Rina gave me last night.

The game was a nail-biter. Every time the Ducks scored, Wisconsin soon followed. It was neck-and-neck the entire game, with the Ducks pulling-off a great last minute drive to beat Wisconsin 28-27! Go Ducks!

Bittersweet, as this was the last game for our already-graduated quarterback, Justin Herbert. It seems so rare these days when a stellar quarterback actually chooses to stay in school over his entire eligibility, making this victory so much more meaningful to me. Stay in school, kids.

The group were sending me photos from their phones all afternoon. The weather was spectacular and DT had scored seats in the 16th row at the 50 yard line. Leo was so happy all day - he just loves football and loves learning the plays. After the game, Leo scored a few autographs from former Duck players who are now in the NFL.

I will simply post a lot of photos of the gang, with captions:

After the game, we (even Lucy and I) all gathered at a local Mexican restaurant to celebrate the victory and to celebrate everyone being together again after so long. What a wonderful win for the Ducks!

Best wishes to My Dear Readers for a wonderful, happy, and travel-filled 2020. Happy New Year!