Portland, Oregon: Dave's college roommate, Red, flew from Chicago to Oregon earlier this week with his lovely wife, Marcia. We have been hanging out, talking, eating, and drinking our share of delicious Oregon wines. The guys went golfing. Marcia and I went to brunch and a matinee of Crazy Rich Asians (me, for the second time). We have taken the train into town, had cocktails at the Benson and dinner at Jakes. Very busy and a fun few days.

We spent today exploring the ridiculously scenic Columbia River Gorge. You may/may not be aware there was a terrible forest fire a year ago in the gorge - started by a little teenage turd who felt throwing lit fireworks into a dry canyon would be a fun activity. Thousands were evacuated. So much property was lost. Interstate freeway traffic was halted for days. 153 day-hikers became suddenly stranded and had to be rescued. Three months and 50,000 acres later, the above mentioned turd had to spend some time in juvie, serve five years probation, and was ordered to pay $36 million in restitution. (Pretty-sure that will not be happening.) After a year, much of the scenic highway (but NOT Interstate 84 that also follows the Columbia River) is still closed to traffic and hundreds of miles of treasured hiking trails remain off-limits. The ground is unstable. Fried trees are falling in the wind. The forest south of the Columbia River in this area is a mess.

Due to coordinated efforts from so many fire districts and government agencies, most of the famous historic sites and buildings in the gorge were saved! Though a few burned hillsides are visible, most of the gorge - as seen by a car speeding 60mph down the freeway - appears green and lush. Thank you so much for saving these iconic structures! 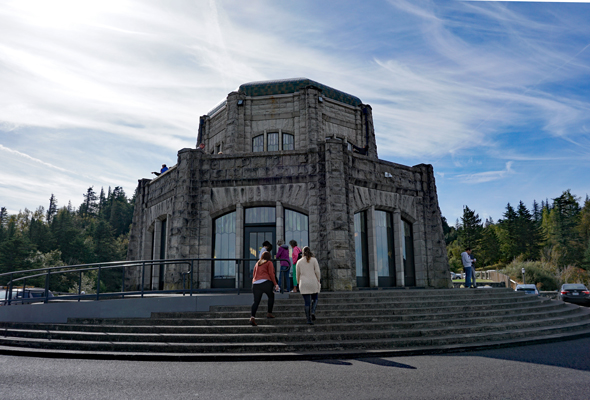 Our first stop was the beautiful Vista House on Crown Point. This location offers views east and west, 700 feet above the river, on the south (Oregon) side of the mighty Columbia River. We enjoyed the views and took photos of ourselves. 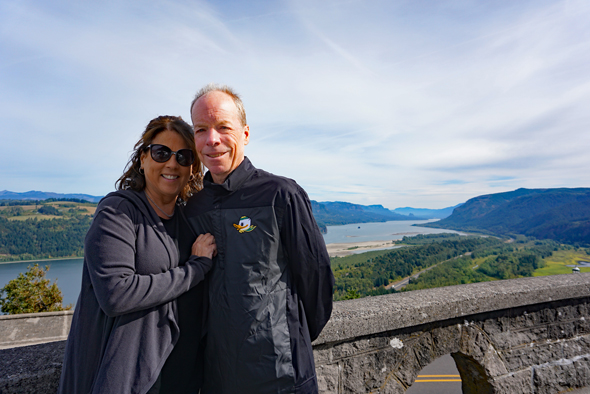 Marcia and Red at Crown Point 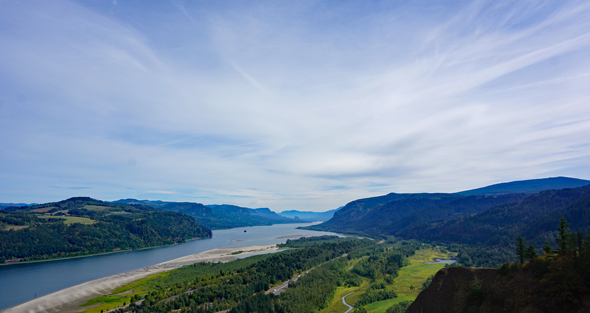 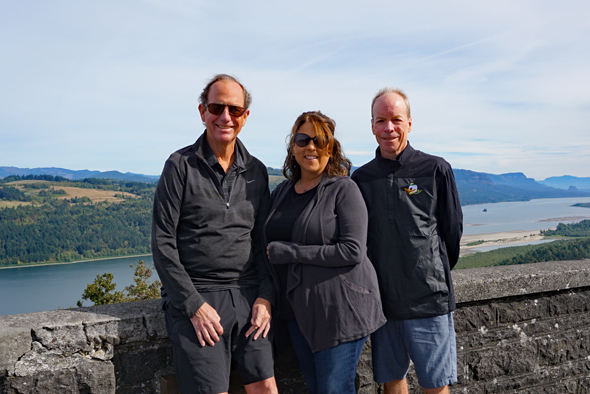 Happily, today there was little wind at this usually very windy spot, the sky was trying to be blue, and it was about 65 degrees.

Our next stop was to the fish hatchery at Bonneville Dam. This hatchery has a pond of Rainbow Trout and several massive sturgeons to view, but they only raise Chinook and Coho (native) salmon here. 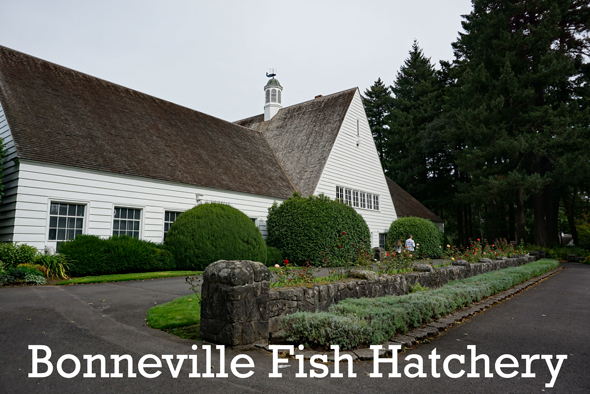 The grounds and gardens at the hatchery, built in 1909, are so pretty.
The flowers - even roses - were still in gorgeous bloom. 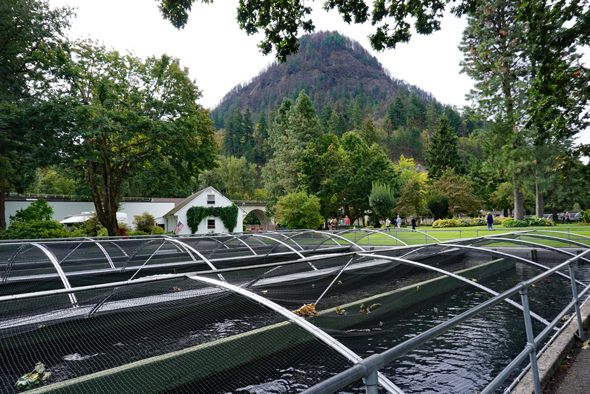 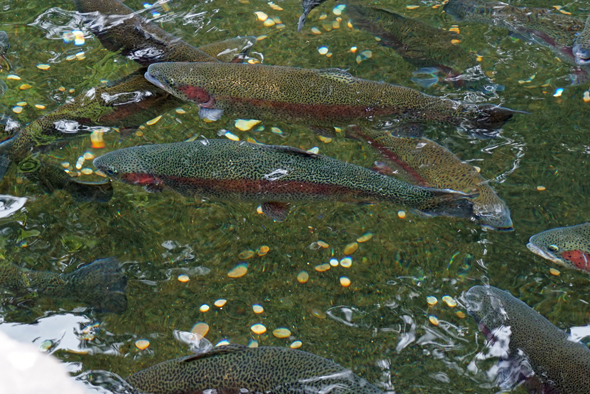 Rainbow trout - these guys are huge because tourists can
purchase fish food by the handful to toss into the ponds. 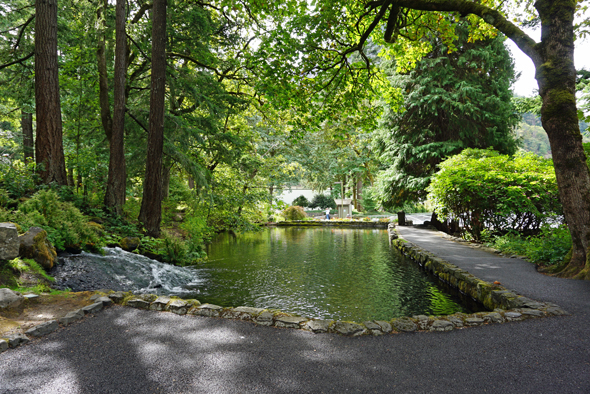 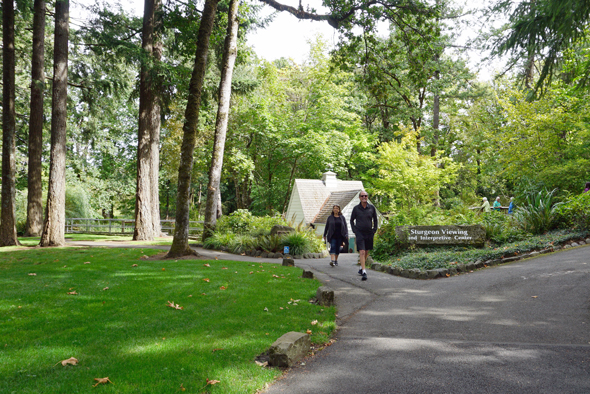 Dave and Marcia - after viewing the sturgeon ponds

One important aspect of this hatchery is gathering eggs and sperm from Chinook and Coho salmon as they travel up the Columbia River from the Pacific Ocean to spawn in the autumn. 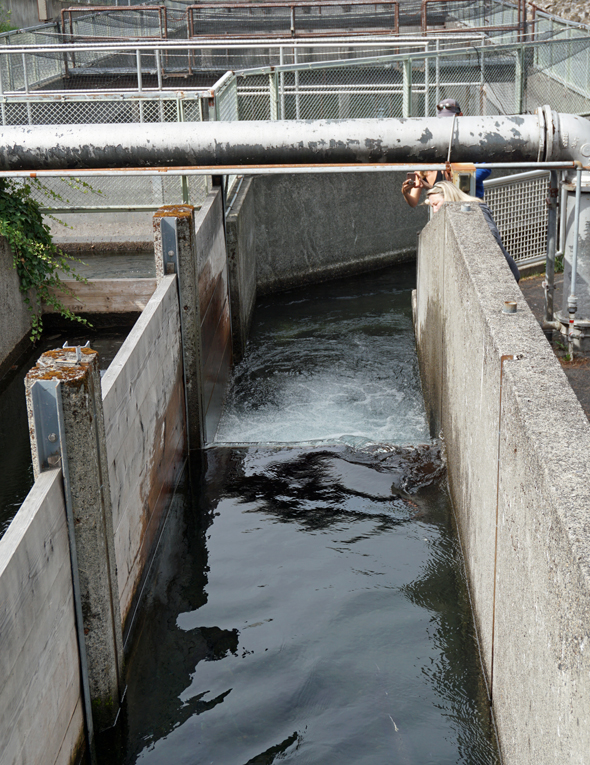 About 30-50,000 unlucky salmon will climb this particular fish ladder, only to learn they will not be making babies the old-fashioned way. The fish are gathered in tanks at the top of the ladder. The males are milked of their sperm (hatchery workers simply squeeze it out of their body!), then the males are sent back into the river. The females are killed (the video said euthanized humanely), then their bellies are sliced open, and an absolutely amazing amount of bright orange eggs spill-out and are caught in big buckets. A female Chinook will have about 5000 eggs; 3000 for a Coho. The eggs and sperm are stirred together in the buckets, left alone for a while so the sperm can do their thing, then transferred to dark water-filled hatchery tanks until they "eye up" - or when the little black eyes appear on the orange eggs... and bit-by-bit the eggs turn into one-inch fish called fry, and are placed into outdoor tanks in February to continue growing. When the fish turn silver (and are then 2-to-3.5-inches long and called smolt), they are released back into the wild, where they will swim to the Pacific Ocean. Their little bodies go through all-sorts of serious transformations which allow the fish to adapt from living in fresh water to salt water. Then, the whole scenario is repeated... or they are eaten by a seal, orca, osprey or human. About 11 million salmon are returned to the wild from this facility every year. 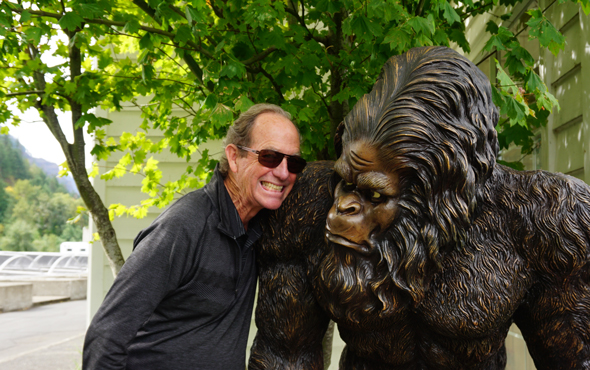 And, Dave made friends with a Sasquatch.

We continued east to the super-cute town of Hood River, where we had a delightful lunch at Celilo, then reversed our route to include a stop at Multnomah Falls, the tallest waterfall in Oregon at 620 feet. 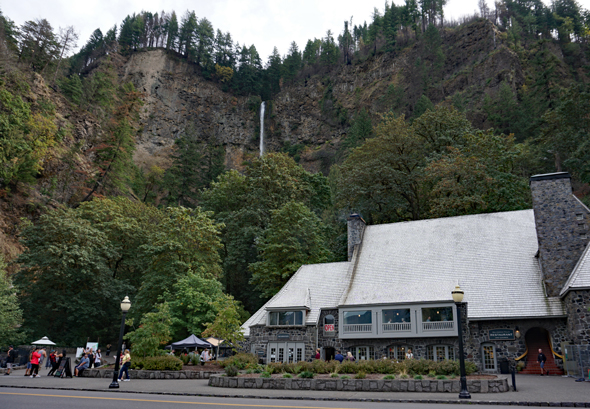 As long as we had to drive by the airport on our way home, we stopped-off and picked up another roommate, Bruce! Not enough roomies? We had dinner at a McMenamin's Brew Pub with one more roommate, Terry, and his wife, Rosie.

The boys are back together.

You may not be surprised to learn a football game is involved in this whole weekend reunion gathering scenario. Ducks v Stanford tomorrow.

Until my next update, I remain, your nostalgic correspondent.
« Oregon Zoo More Roomie Reunion »