Indio, California:  We survived the second weekend of the Coachella Valley Music Festival. I did not leave the resort from Thursday (manicure and quick grocery run) until today (fish tacos and grocery run). The weather cooperated, so the hipsters probably all have sunburns with their hangovers this morning... but they probably had a lot more fun than this old geezer.

Captain Jim and Mary invited us to join them for dinner at our clubhouse Friday night (thank you, Dear Friends!), but every other morsel consumed came from our outdoor kitchen. Since we couldn't go out for tacos, I made tacos: 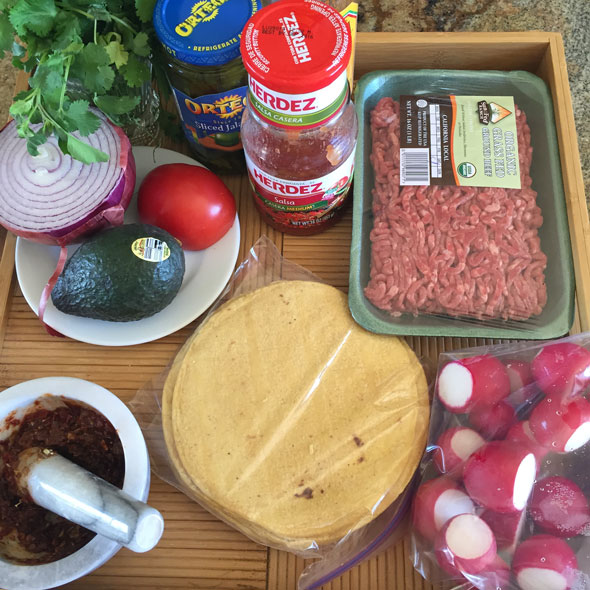 A few cloves were mashed with a few jarred chipotle peppers in a mortar. I also included a little salt, oregano and cumin and added this mixture to a pound of sauteed grass fed ground beef. The tacos were served in corn tortillas. 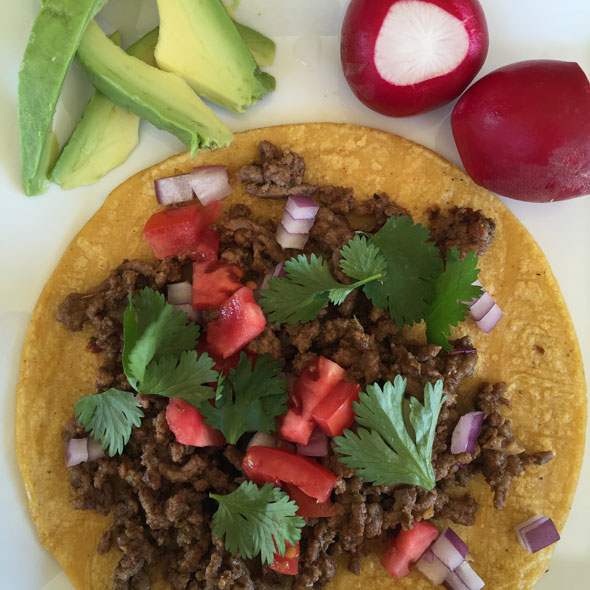 Being "stuck" inside the Motorcoach Country Club for a few days isn't exactly torture. Though about half of our fellow campers have headed home for the summer, we still have three pools, hot tubs, tennis, bocce ball, and a golf course. Not to mention a bar/restaurant. What I am trying to say... with all the time we spend exercising, working, playing, cooking, socializing, doing the crossword and relaxing, our incarceration quickly passed.

We certainly knew something was going-on outside The Bubble. Teeny planes flying over our motorhome all damn day, toting advertising banners. Did you know you can save money with Geico? Use a Trojan condom, please. Eat here. Buy this. One small sign-dragging plane had to make an emergency landing on a nearby golf course after experiencing engine trouble. Though the plane landed upside down, no one was injured. We could hear the music (the bass, mostly) and there were sirens several times, but the hottest happening during the festival seemed to be a Justin Bieber sighting at the local mall.

We did spend a bit of time listening to the music from the festival streaming on XM radio and even watched a few artists on TV via a live stream. 2015 was the first time Coachella was broadcast via these means. Nice to have the option, but except for Steely Dan, we had barely heard of any artist.

We are so not hip. 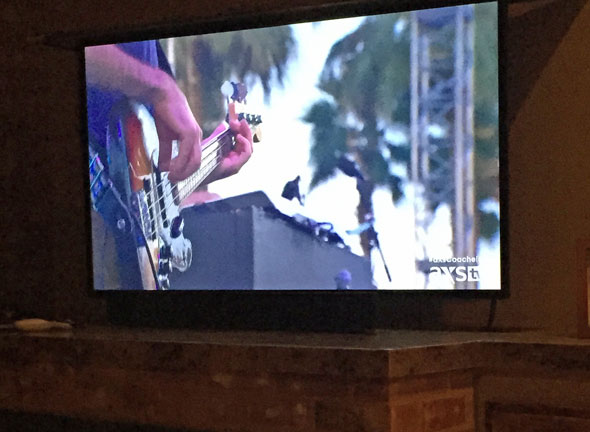 To celebrate our freedom, after jogging at the same time, but not together this morning, we went out to replenish our fridge - but of course - we stopped for tacos first. 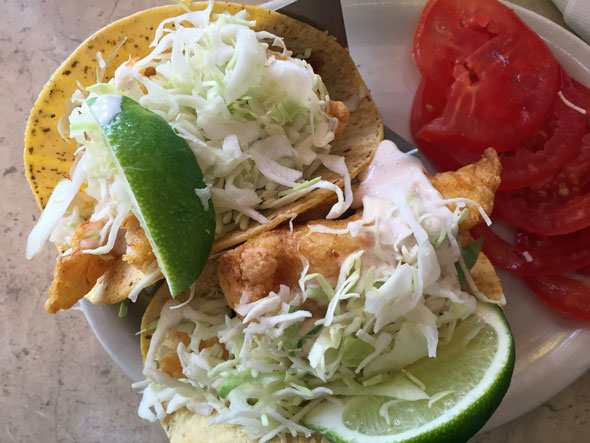 Baja fish tacos (cod) from Fisherman's Market & Grill (Hwy 111 at Washington). They have a $7.99 lunch special, and platter after platter of these crunchy babies fly out the kitchen door.

The grocer was busy restocking shelves. Hoards of hipsters were heading to the airport, or driving back to Los Angeles. Truck loads of porta-potties were being hauled away. Dave and I saw two Juicy Rental pop-top camper vans for the first time: 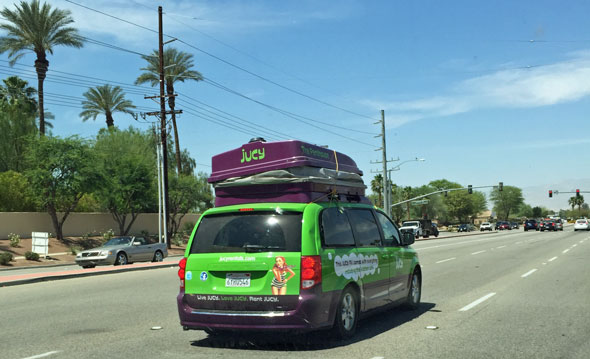 I think it is safe to say, these campers were not successful returning their rental van to it's starting position. (That is what bungee cords are for!) A quick quote on their website was $79 per day for a weekly rental in June. Not bad. Juicy Rentals come with a complete outdoor kitchen situated in the rear of the Chrysler van. No potty.

Until my next update, I remain, your musical correspondent.
« Meanwhile… Mapo Tofu (Vegetarian/Vegan) »