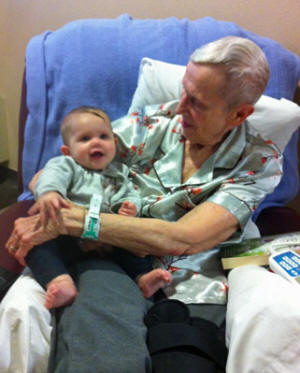 Indio, California: While I was with Leo and Lenny in Los Angeles, DT, Lisa and Lucy flew out to Wyoming to see DT's mom. Dave's mom was just ready to return to California when she slipped and broke her leg. Just a hairline fracture, but the break requires a splint (not a cast, thank goodness), a short hospital stay, and a 6+week recovery period until she can rebook her return to Merced.

Lucy is a very good traveler (considering she had just returned from a week-long trip to DC to observe Passover with Lenny's family, before jetting-off to Wyoming - via Salt Lake City). Lucy loved meeting her Great Grandma and was perfectly charming for the entire two-day visit at the hospital.

Dave and Lisa had a few good tales from their two-night trip to Wyoming: Dave's bag never arrived in Salt Lake City, so he stopped at a big store (starts with a "W") for a toothbrush, etc. (Delta Airlines returned his luggage to Lisa's house sometime overnight.) Every business, except the gas station, is closed in Mom's teeny Wyoming town on Sunday, so DT and Lisa made due with gas station cheese and crackers for dinner Sunday night. Gourmet!

Just as their flight from Salt Lake City was taking-off for Los Angeles, passengers began shrieking. Dave was obviously concerned and looked out the window to see what was going on... but the trouble was coming from inside the plane. A little bulldog puppy had escaped his carrier (around row 15) and was scooching his way up to the front of the plane - freaking-out everyone as he rubbed up against their ankles on his path to freedom. As the plane left the earth, a flight attendant scooped-up the wayward critter in her arms, laughing at this most-unusual situation. Ten minutes into the flight, she was no longer smiling as the puppy piddled on her lap.

While Dave and Lisa were visiting Grandma, Lenny and I were in charge of Leo. Monday, while I was off shopping for Chinese foods, Leo was in school and stayed after for "enrichment" (ballet). Lenny worked.

And... there was this whole cougar situation happening in Los Angeles.

Tuesday, Leo was finished school at one o'clock and Lenny took us to lunch at Mixto. I ordered a rice bowl and it was delicious: 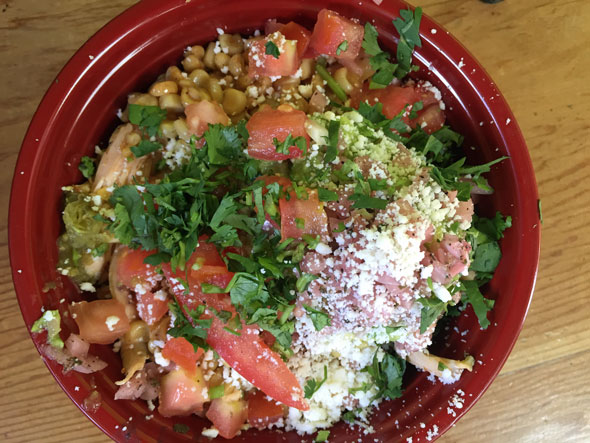 Too. Much. Food. $8. I keep trying, but have never been able to finish this bowl of rice, beans, corn and all the fixings. 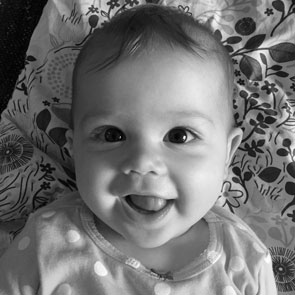 It is so difficult leaving these two!

We really needed to get back to Indio as we had friends visiting and there were tee times booked and tables reserved at restaurants... so we returned to the windy, dusty desert. It was all DT could to do keep our Little Honda from blowing off the road coming over the pass from Los Angeles. Winds in the mountains were recorded at 65mph! Of course, our covered pavilion was coated in a thick layer of sandy grit. We had a great night Wednesday with three couples from Portland. Everyone had worked together in the olden days. So much in common. So much history.

After all my Asian grocery shopping in Los Angeles, I was over excited to begin cooking from Cathy Erway's The Food of Taiwan: Recipes from the Beautiful Island. First up? Beef Noodle Soup. This soup is completely different than any beef noodle soup found anywhere in Chinese cooking and is suspected to originate in the early military settlements the Chinese built after arriving on Taiwan.

I prepared the soup according to the recipe (halving the portions), but instead of simmering the soup for three hours on the stove top, I poured it into my crockpot (low for 6 hours) and went to Tacos Gonzalez for lunch.

That's how I roll. 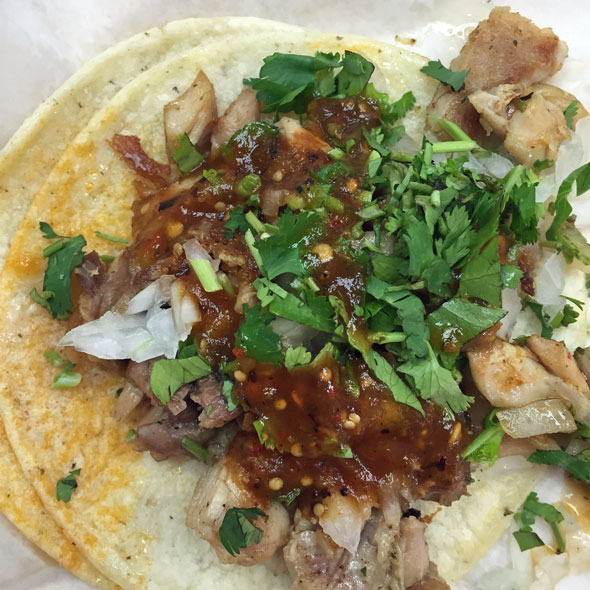 We invited Mary and Captain Jim to taste-test the Taiwanese Beef Noodle Soup (see the recipe here). I do not recall big chunks of beef in this soup from my Taiwan memory bank. I remember slices of beef, so I did slice the beef, but do not think that is an important game-changer in this recipe. This soup is all about the broth. Smells bring back so many memories for me and this soup was a return trip to Taipei! I was surprised at the addition of a little fresh tomato and was blown-away at how the addition of a little sugar brought everything together. 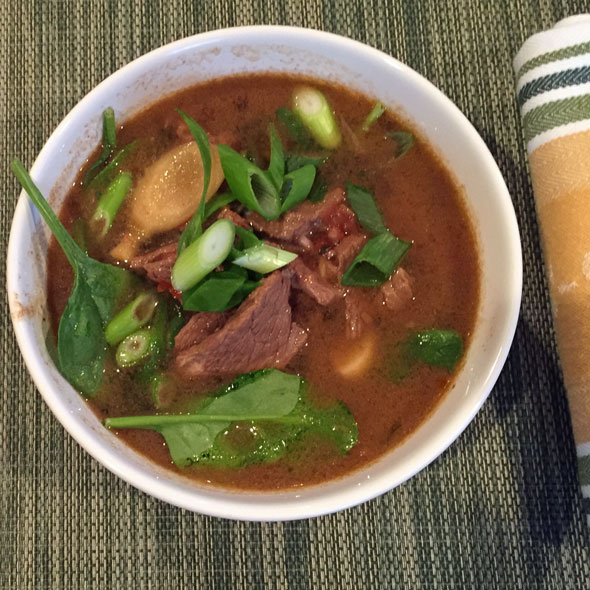 NOTES: If you would like to try this recipe, but live in a location where imported ingredients are difficult to find, try this: use a sliced jalapeno for the red chilies, use Sriracha for the chili paste, use dry sherry for the rice wine and (about half the amount of) ground black pepper for the Sichuan peppercorns. No one will know. Also, this soup was always served with leafy greens, not baby bok choy when we lived in Taipei. I put a handful of fresh spinach leaves in the bowl with the noodles before ladling the soup over. No Chinese noodles? Use spaghetti. 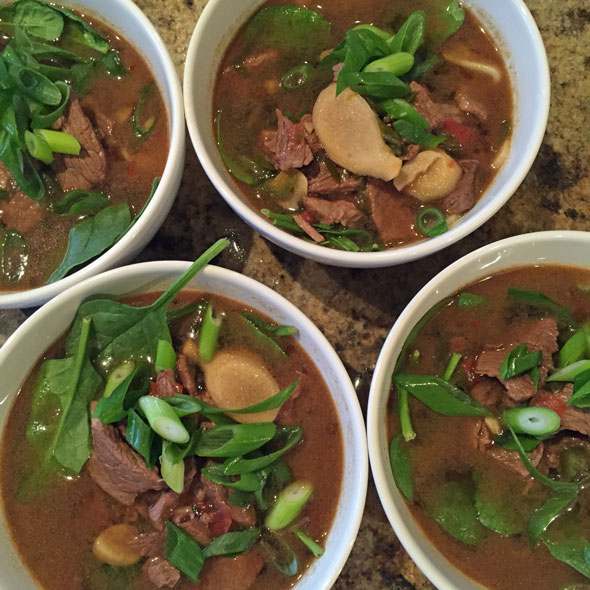 I used fresh wheat noodles (made in China) that required boiling for two minutes - assuming my Chinese reading skills are still legit. The fluffy white noodles are buried under all that fragrant broth in my photos. Captain Jim slurped up his entire bowl! The soup was a meal - we only served Taiwan Pickle to accompany.

Since I purchased several more off-beat-to-Indio foodstuffs in Los Angeles, look for more experiments from the new Taiwanese cookbook in the coming weeks.