Really on the Road… Finally

Corning, California: Our final chore Friday in Eugene was to have the annual servicing on our diesel engine and generator. We had our motorhome to Cummings by 8a, and kept ourselves occupied until early afternoon, when the jobs would be completed.

Would you believe we drove back to Marché for breakfast? Why not? We took our time and just enjoyed the morning. The 31-degree morning. Not a cloud in the sky though, and with the sunshine and the leaves turning, Eugene was really showing off.

Dave ordered my favorite herb omelet, and I had the smoked salmon hash (without the two poached eggs because I am not a fan of poached eggs). We also ordered a “side of fruit” – which was more like a fruit platter. 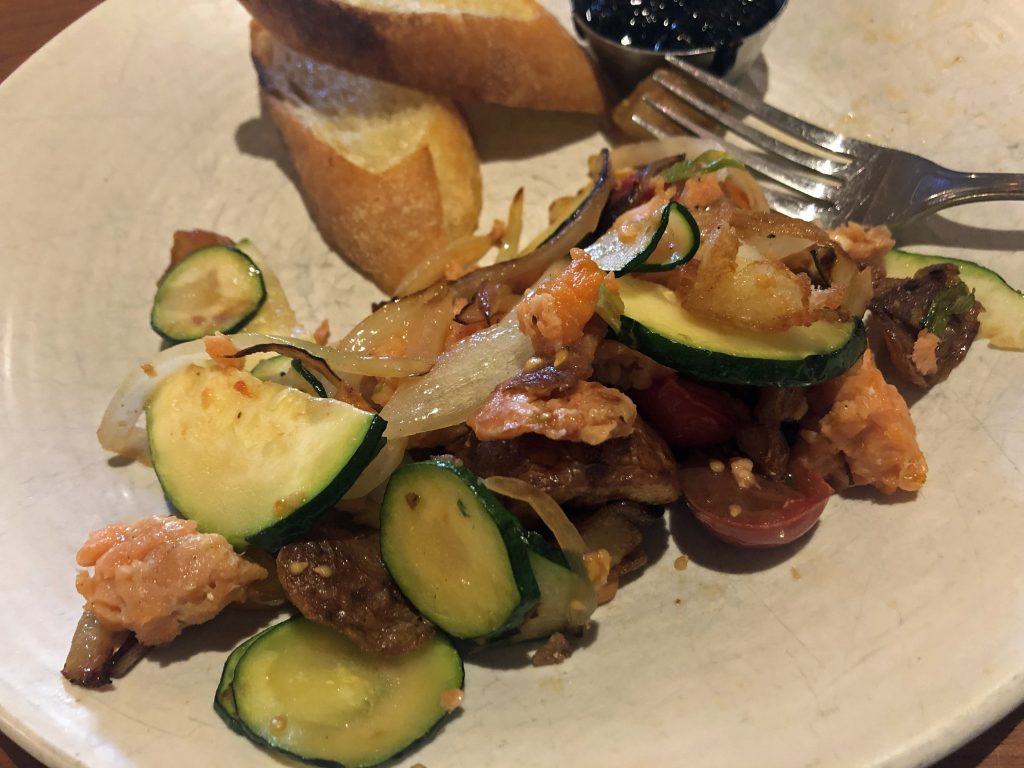 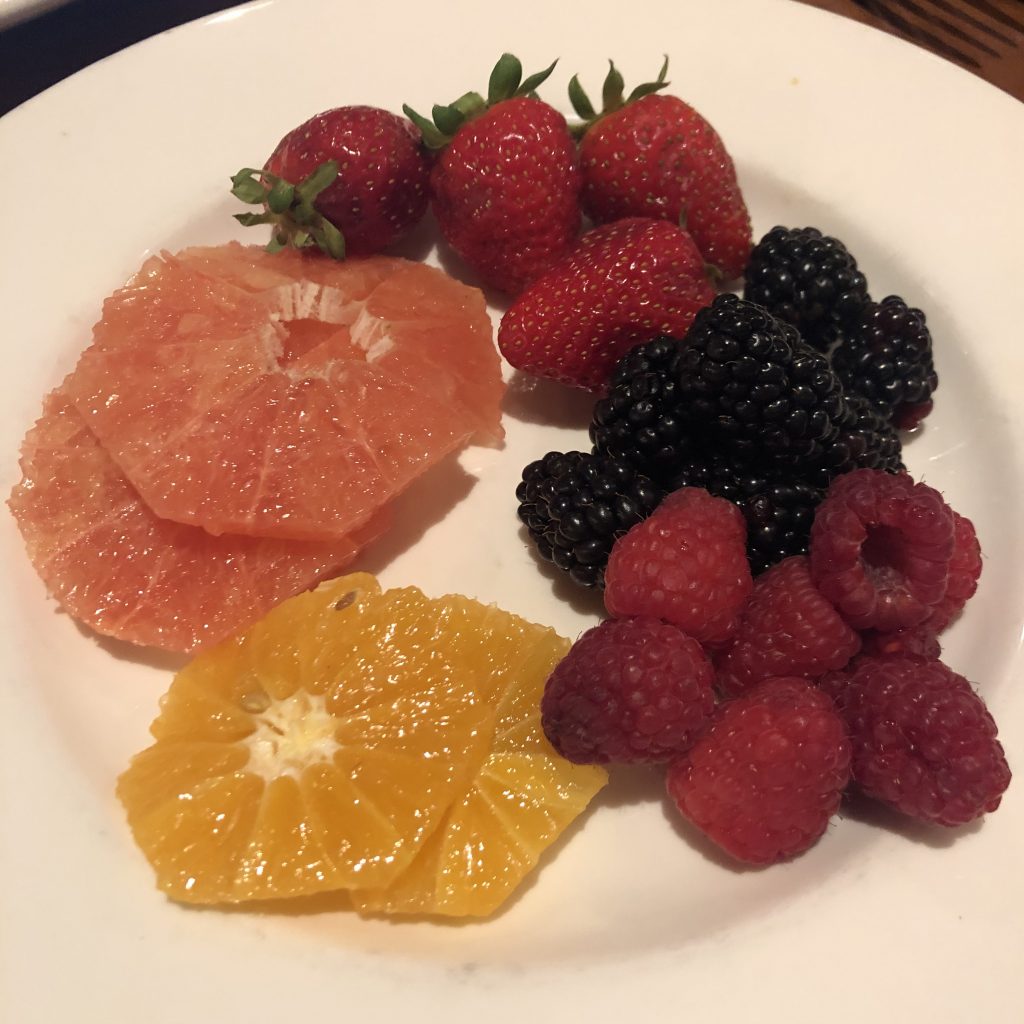 After breakfast we drove over to the Duck Shop at Autzen Stadium, not even thinking the football stadium might be a bit meshuga today due to a rare Friday night game. It was! The Duck Shop was in a beehive of activity, preparing for thousands of happy shoppers this evening. We found a cool tee for Leo and Duck barrettes for Lucy.

One last task: mailing change of address cards. It’s official, but until we purchase a new abode, we are using our address at the Motorcoach Country Club.

I have been needlepointing a pillow for Tamra’s mother all summer, and finally finished a few weeks ago and sent it off to my finisher – along with fabric and trim – to be sewn into a pillow. We picked it up, along with one other, the day before we left Portland. 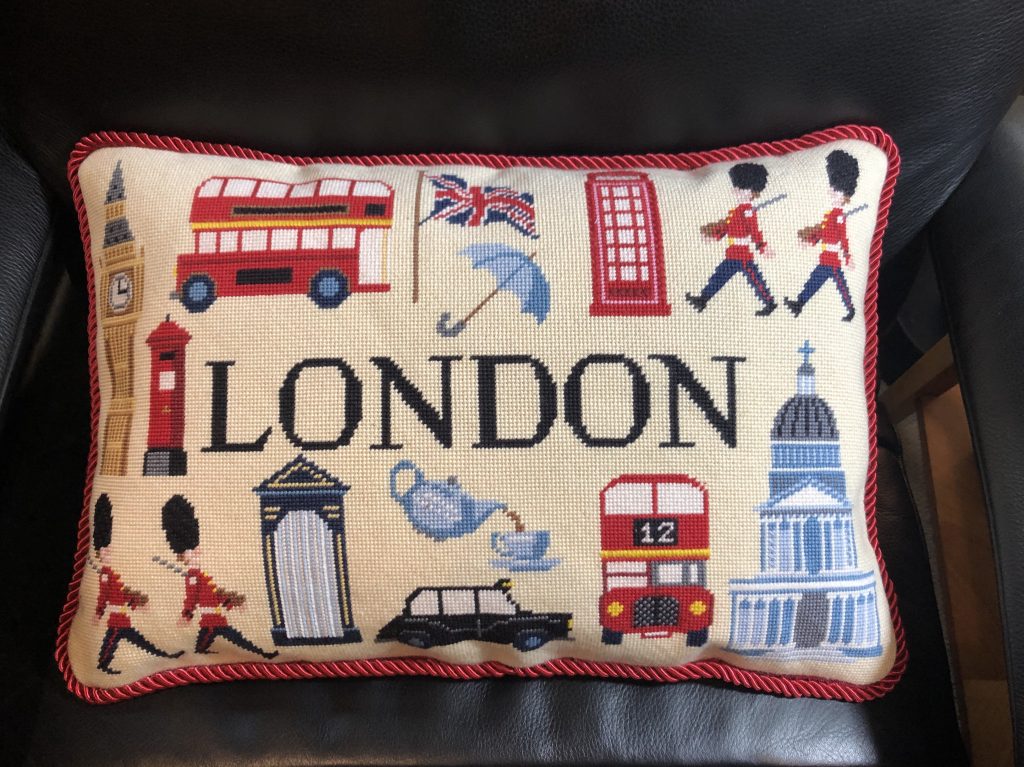 Long time readers may have seen this pillow before because this is the second time I have stitched the canvas. The first pillow was for Emma, who had just moved to Portland from London and thought it might help with her homesickness. Tamra’s mother is also from London and Tam thought her mum needed this pillow, and could I make the bus #12 (the canvas is painted with a #10 bus) because her mum always rode bus #12? Done. Tamra and Steve were on their way to Eugene for the game, so stopped by Cummins to see us and fetch the pillow. This London canvas was stitched with Silk & Ivory, a 50/50 blend of silk and wool that is my favorite fiber. EVER.

The other pillow was shipped to Steve and Gina a few days ago. I stitched this canvas in Vineyard Silk over the past winter in Indio. Difficult to see in the photo below, but the stars are stitched with silver metallic threads, and there are metallics in the cording. Gina is a country gardener, so we knew she would appreciate this scenario: 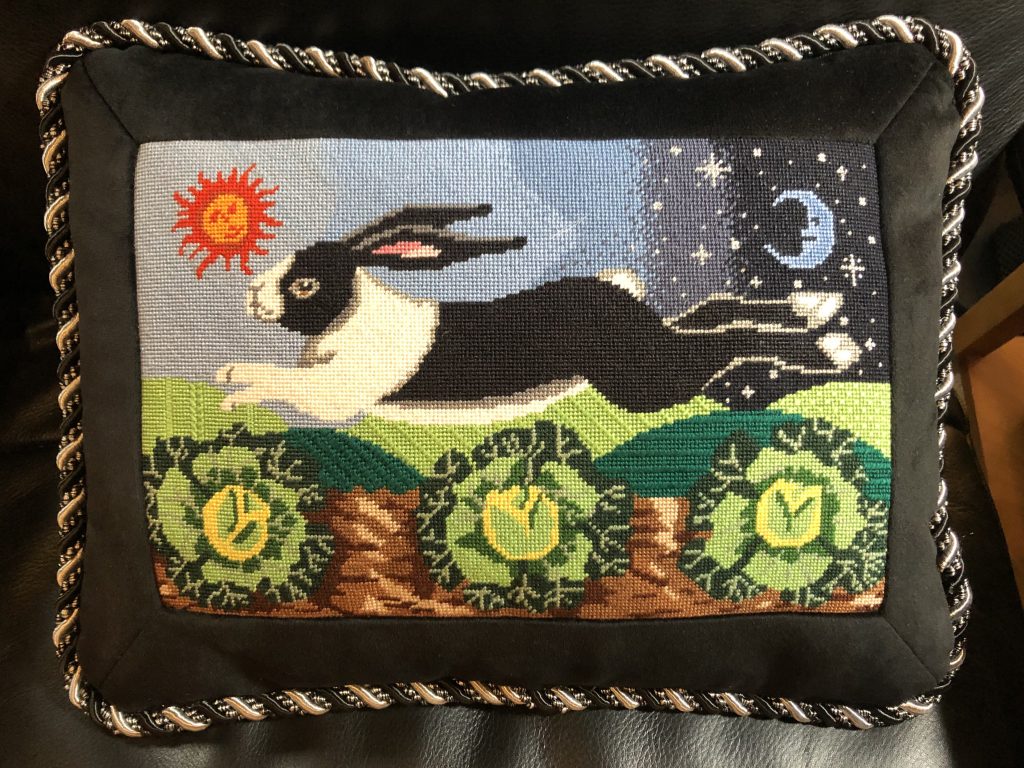 As soon as our bus was finished at Cummins, we hopped-in and pointed her south. What? Dave didn’t go to the game? No, he hates late games, and it is so cold in Eugene, and he is under the weather with a nasty cold. He gave his tickets and parking pass away, and we stopped two hours south of Eugene at 7 Feathers RV Resort in Canyonville (I-5, exit 99), put up the DirecTV dish and had a nice quiet evening. Dave was asleep far before the end of the game, watching it with one eye open from bed. Oregon beat Colorado 45-3. (Not a typo.)

Since Friday was our “official” first night on the road, I baked a lasagna (that I had prepared a few weeks ago and froze just for this occasion. I have been working on this recipe for at least a year, but really how often should someone eat a beef and bechamel lasagna? I think I have the recipe nailed now and will make it one more time, then post it on this website. 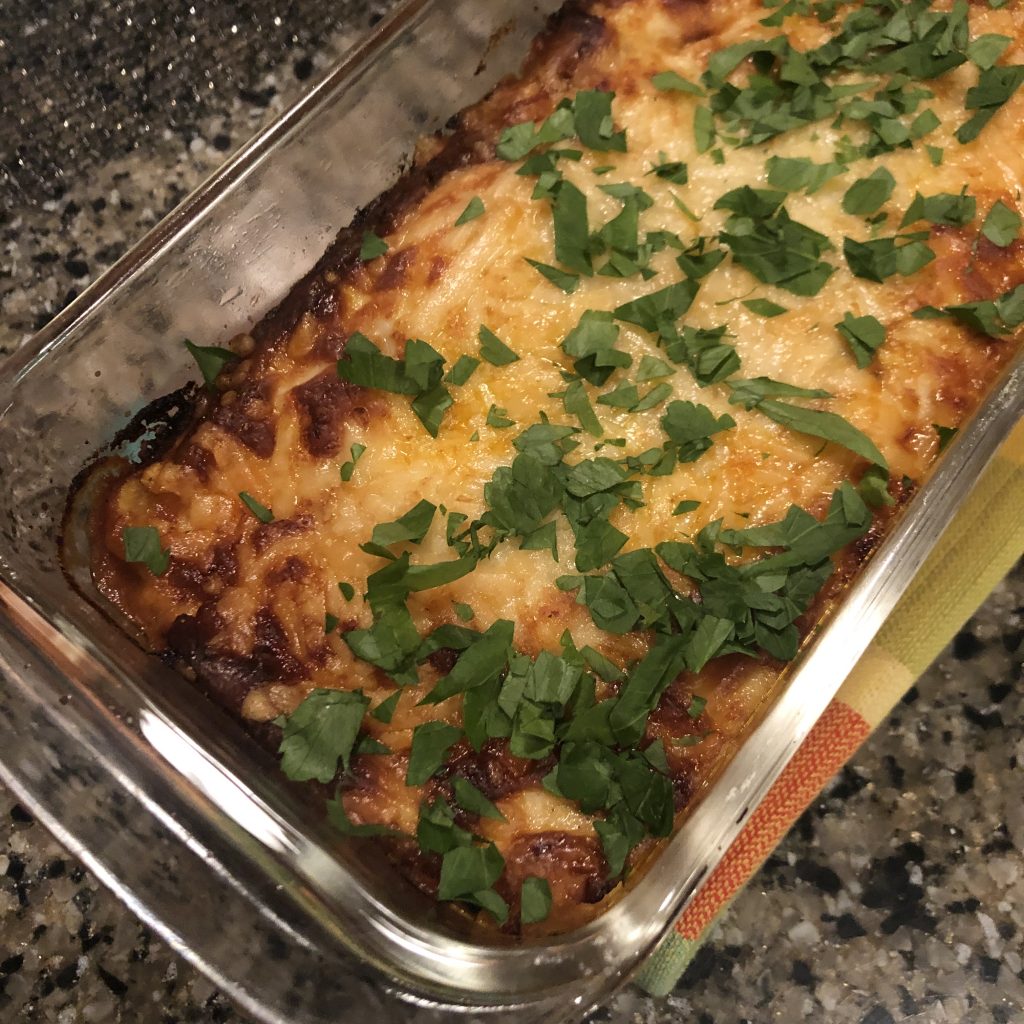 Because… well, it is the best lasagna I have ever made. 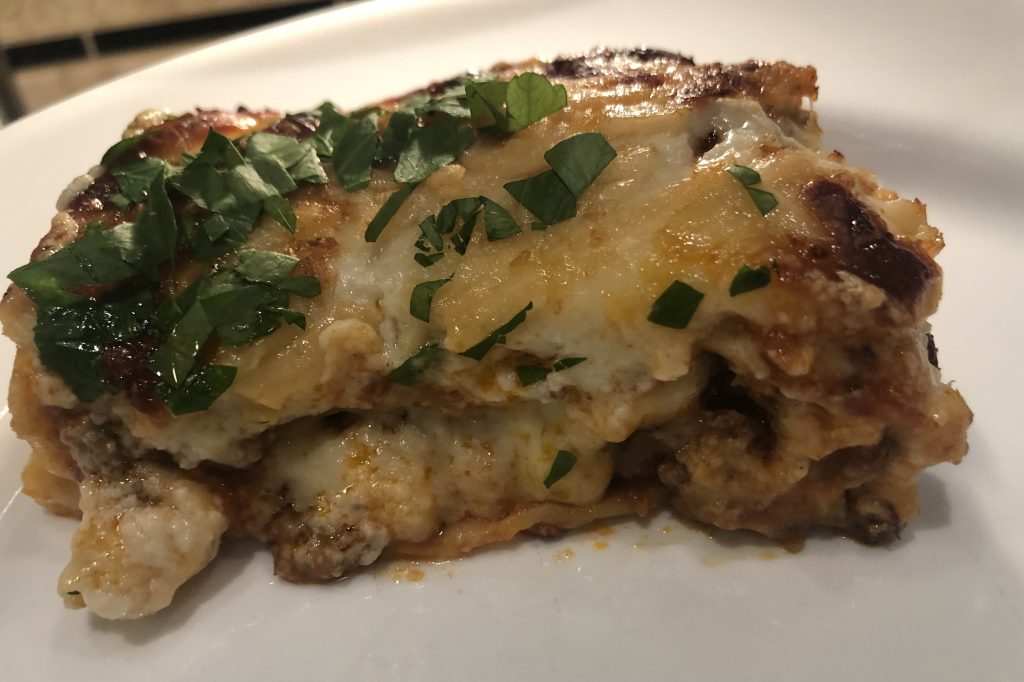 Rich. Gooey. Savory. Cheesy. Crispy top. The recipe should make enough to fill an 8×8-inch pan, but I made two casseroles in loaf pans – better sized for two (hungry) people.

This morning, we left Canyonville and continued south in perfectly sunny weather. I was wearing capri pants for the first time in like forever. We only stopped once, just over the Oregon-California border to make a sandwich. 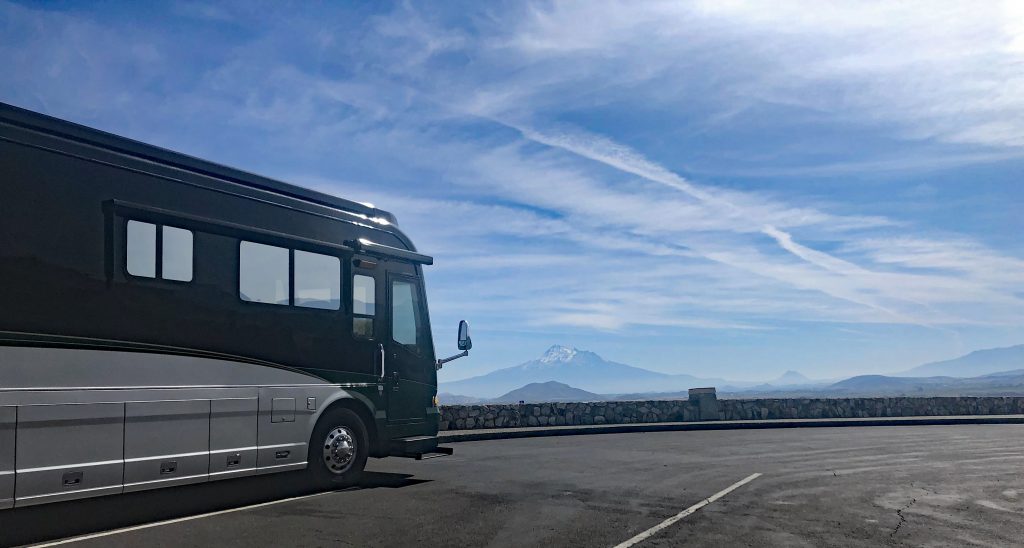 Mt. Shasta was in view. She had quite a bit of snow already and the rivers along our drive today were very full and Lake Shasta was also very full. We drove to another of our usual stop-over spots in Corning, watched more college football, and had black bean enchiladas – another easy make-ahead meal perfect for RV travel days.

We did not enjoy margaritas with our veggie enchiladas because the agent confiscated all our citrus at the agricultural station at the California border.

I was also able to text message with our niece, Carla, a Marine stationed on Okinawa. Other than a bit of wind, Okinawa has been spared the ravage of Typhoon Hagibus. Just imagine if mothers could have text messaged with their enlisted/drafted children in past years. We are so lucky to be able to have instant communication with Carla in Japan!

Until my next update, I remain, your Californian correspondent.

RV Park: Rolling Hills RV Park – every site is a pull through. Every site is $35. The sites aren’t even numbered. Just grab one. On site is a casino, restaurants, hotel, truck stop, store and a very nice golf course. No bath house. They do take reservations now and I suggest you make one on a weekend.