TrackTown, USA:  My Driver and I have reunited, and are living in a trailer park on the interstate. Doesn't it just sound magical? Or does it sound like the plot of a Coen Brothers film? No matter, it is our life for the next ten days for the US Olympic Track & Field Trials in Eugene, Oregon. There is no place we would rather be.

Dave has been in Eugene for most of the past two weeks, using our motorhome as his "hotel room with a washer/dryer", working volunteering on final prep for the track meet. I joined him today. 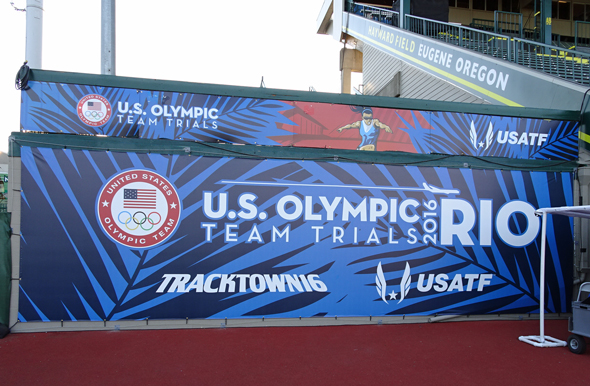 Entering Historic Hayward, I was again amazed at how the track has been transformed to hold over 20,000 track fans every day. I found DT at the finish line, with a group of TrackTown USA staff, in the midst of rehearsing the Opening Ceremony tomorrow. 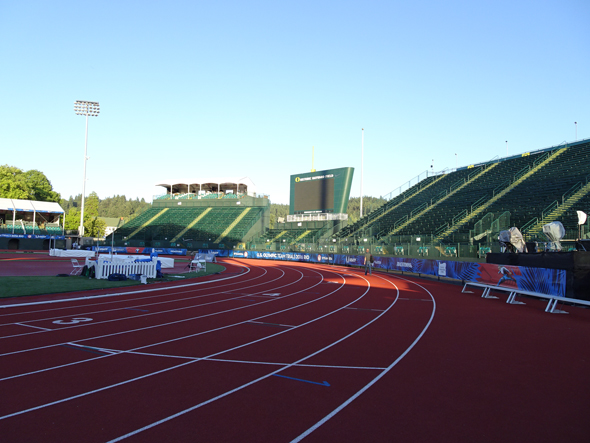 Temporary grandstands on the first curve 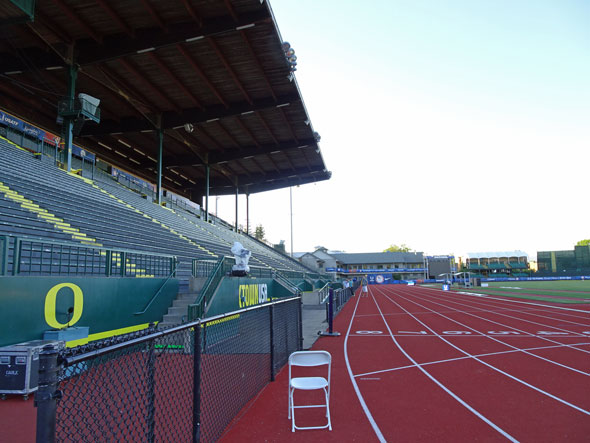 The fastest track in America

My presence was requested by the caterers. (Imagine that!) They were doing a dry-run at the cafe in the Fan Festival area behind the stadium and asked everyone to dinner. The purpose was to train their employees and work-out any kinks before 20,000 people show up tomorrow wanting food. I ordered a sandwich and it was delivered in two minutes. It was really good and really cold and I suspect there are not too many kinks to work out.

The Fan Festival (map) is huge, completely surrounding Historic Hayward Field, and covering two intramural soccer fields behind the West grandstand. Newly carpeted with uber-realistic artificial turf, it is an oasis of green. 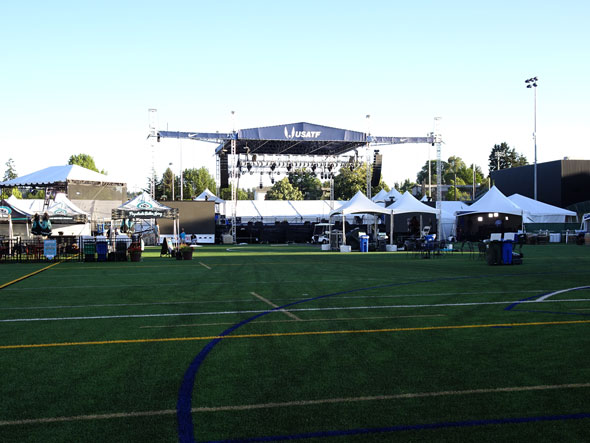 The south end holds the stage. Music before and after the meet each day. The stage will also host athlete interviews and other media events. 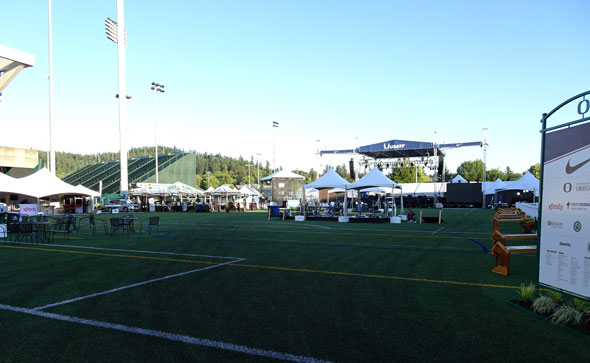 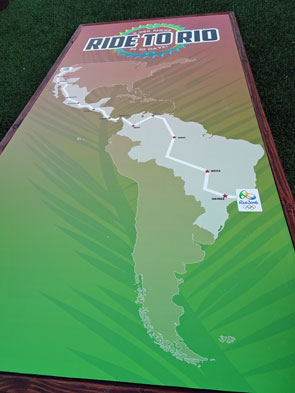 RIDE TO RIO: One fun activity for fans involves pedaling a stationary bike - to Rio. The total mileage covered each day by fans will be tallied. It is 9966 miles from Eugene to Rio.
Six adult bikes; two for kids. Not sure they have enough bikes. 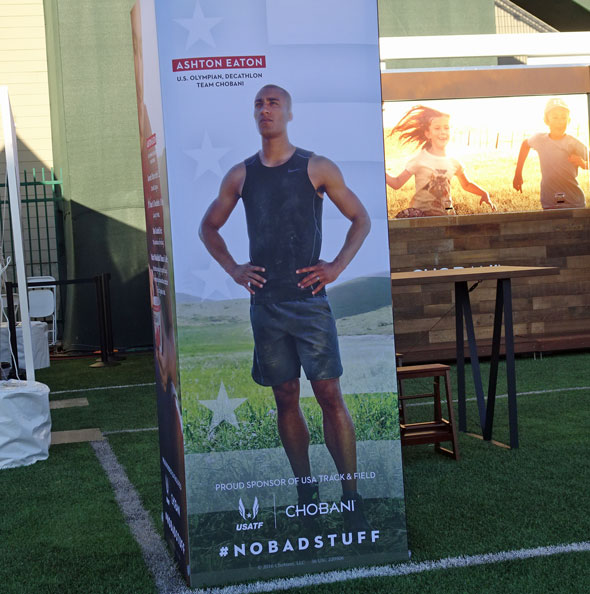 My favorite area is the Starting Block area for kids. The competition will be fierce for the tots in 2016! Kids can compete in a heptathlon. After completing each event, their score is tallied. Daily results will be posted on a leader board. Isn't this the best thing ever? (I am flying-in a ringer... a certain 4-year-old I know... on the cusp of turning five, who will obviously crush his age group.) 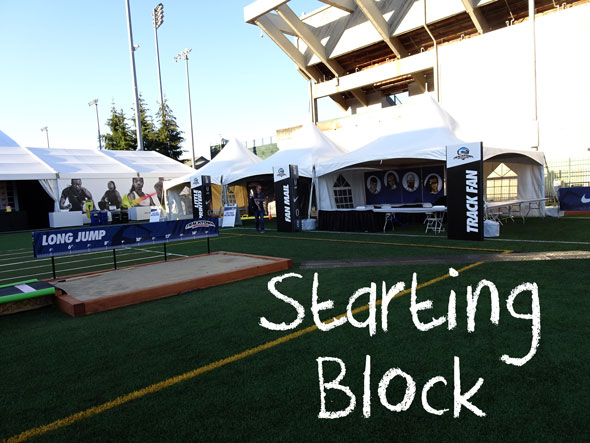 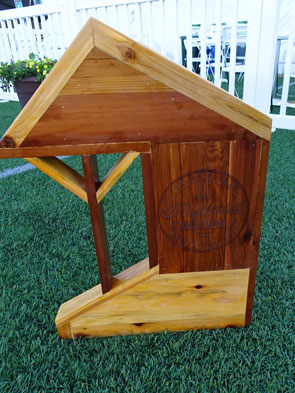 The Hayward Field replica benches were so popular during the 2012 Olympic Trials, many more were ordered for 2016. The benches will be used during the trials, but have been already been sold to happy donors.

Admission to the Fan Fest is free. (A ticket is required only if you want to go inside the arena.) If you don't have a ticket - the track meet is broadcast live on massive screens positioned on either side of the stage! Relax. Have a beer. Watch the meet happening 100 feet away! 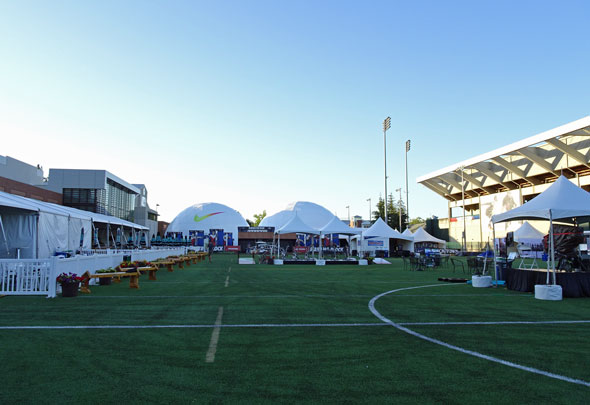 The North end of the Fan Fest hold three white domes housing a NIKE track and field museum and retail.

Everything looks good to me, and the 10-day forecast promises perfect conditions. This is the third time in a row Eugene has hosted the Olympic Trials. It should be routine, but it is not. Every four years, the organizing committee finds something different to entertain the crowds. New. Exciting. But the Fan Festival is obviously second to the main event - the track meet.

The Olympic Trials have a saying: First, Serve the Athlete. Their needs come first. Housing, feeding, practice facilities, transportation, medical staff and facilities, trainers, massage - anything they need -  so every athlete can do nothing but concentrate on achieving their best performance over the next ten days.

Many feel the US Olympic Trials is the best track meet, because the US squad is, famously, the hardest team to make. First, second and third place go to Rio. That's it. You can be the fastest runner, highest jumper or longest thrower in America, but if you have a bad day this week, you are watching the Olympics on television. From your sofa. Probably with a six pack of beer.

Until my next update, I remain, your ready correspondent.

You may also like:
NBC Olympic Trials Broadcast Schedule