TrackTown, USA:  The first day of a huge meet is filled with anticipation, last-minute scrambling and fires that need to be put-out. But after holding this meet for the past two Olympics, the team may have finally reached that magical "third time is the charm" status? Everything went so well. The weather cooperated. The fans were happy. I am sure there were a zillion bits of chaos happening behind the scenes, but we fans did not notice. We were here for the sport and the athletes delivered.

The photos of the prepared facility I posted last night look completely different with people: 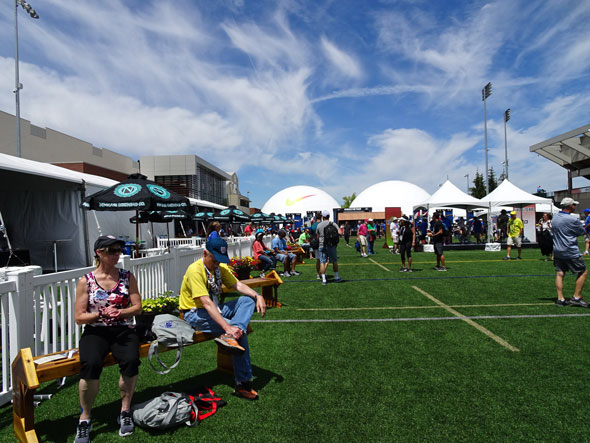 The lengendary benches were enjoyed by track fans 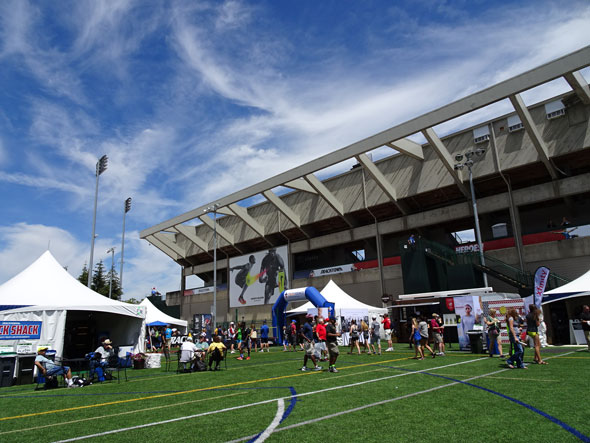 Fans streaming in - 4 hours before the meet starts 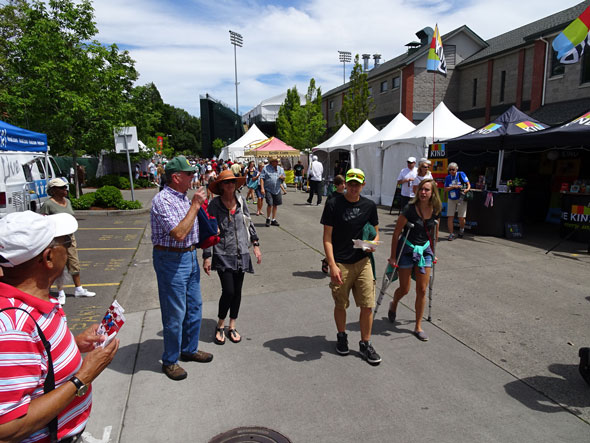 Fans arriving on the concourse outside the track 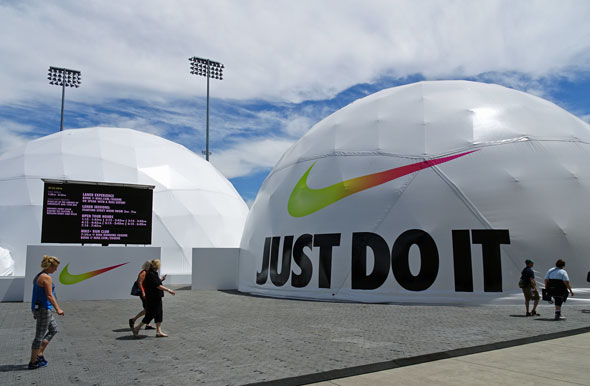 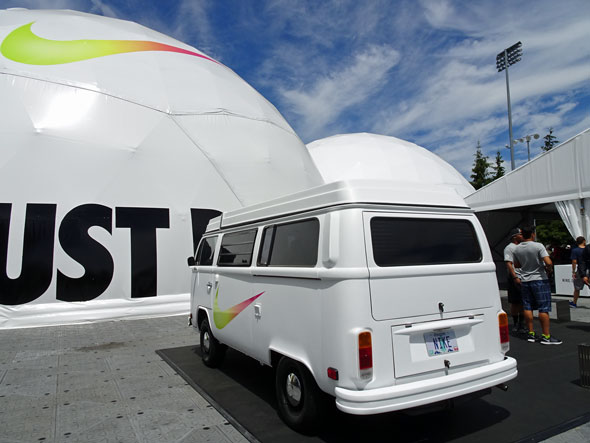 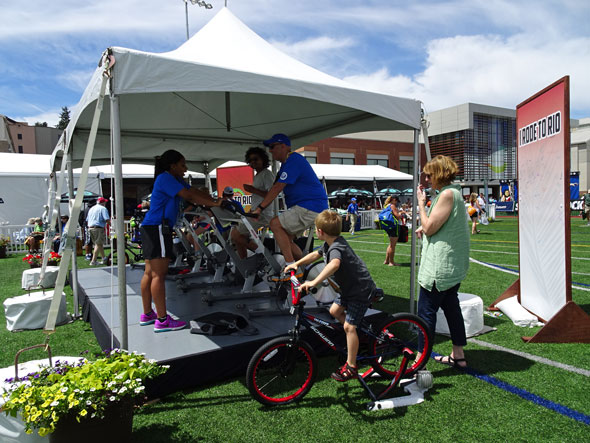 People rode so many miles today - the road to Rio is in Los Angeles!

May I take a moment to mention there are hundreds of volunteers required to put-on an event of this caliber. Hundreds of reporters and photographers (the street opposite the track is filled with network satellite trucks). Security. Sanitation. Officials for every event. Timers. Announcers. Caterers. It takes a village to put on a track meet. These guys know all about putting on a track meet: 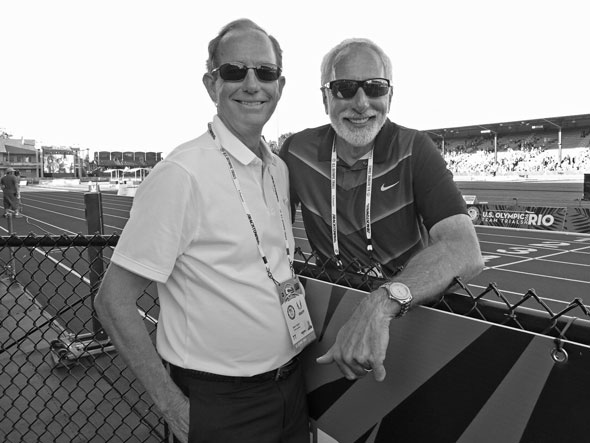 The meet started with a brief Opening Ceremony - an introduction of 1972, 1976 and 1980 Olympic Trials (held at Historic Hayward Field) athletes. It was a nostalgic homage to athletes who competed for America in these games. The athletes were introduced and made a lap together around the track.

The Grand Marshall of the parade was University of Oregon alum Otis Davis. Now 83, Davis was the first Duck to win a gold medal as he set the 400m world record in the 1960 Olympics in Rome. Davis also won a gold medal in Rome on the 4x400m relay team. GO DUCKS! 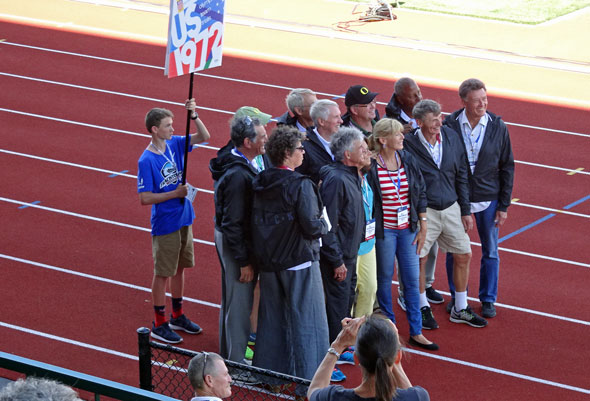 When the introductions were over, there was a very special presentation at the south end of the track. Popular shot putter, Adam Nelson, was finally awarded the gold medal he rightfully won in the 2004 Athens Olympics. Nelson finished second in the 2004 games, but the winner was eventually caught as a drug cheat and today was the day Adam Nelson (now age 40) had his rightful gold medal placed around his neck!

Unknown to Adam, his family flew in from around the US to witness the ceremony and to watch him compete in his last US Olympic Trials. Dave and I hosted his family in our seats this afternoon and were delighted to meet his parents and family. Adam is an attorney in Georgia (in his spare time), married, with two young daughters. There certainly was not a dry eye in the stadium as Adam Nelson received his long-deserved medal and immediately the National Anthem began... and the second the anthem finished there was a fly-over by the Oregon National Guard: 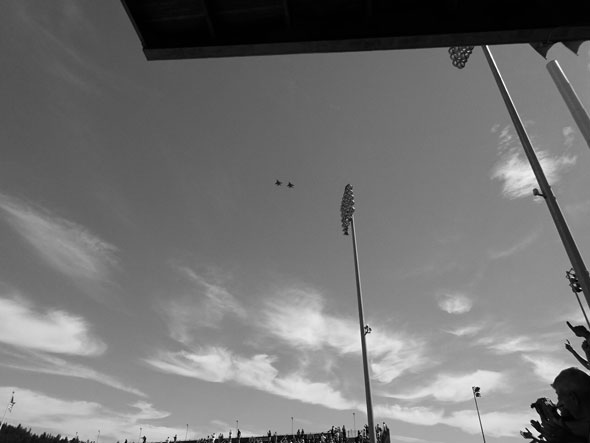 I remember leaning over to Adam's mom, as she was quite teary at this point after seeing her baby's face on the big-screen with tears streaming down his face after receiving his gold medal - um, hold on to your hat, ma'am, we are about to be buzzed by a few fighter jets... 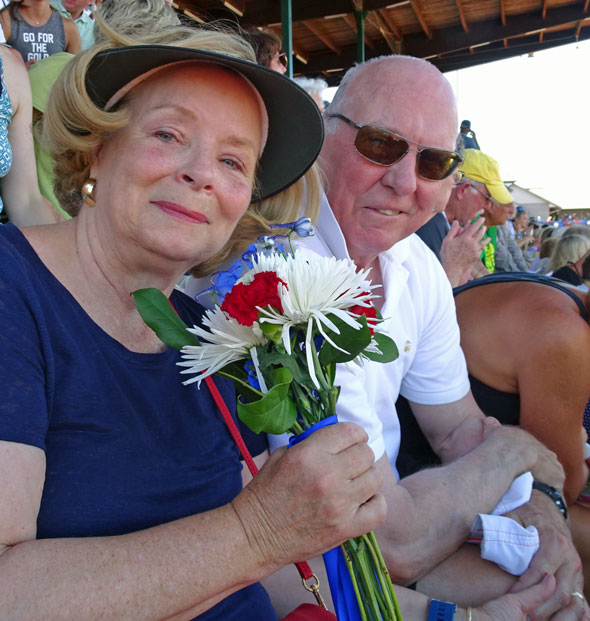 Adam gave the flowers from his medal ceremony to his Mom. So sweet!

Many heats and prelims today (see the link to results below), but only two finals. Men's shot put and men's 10000 meters.

Adam Nelson and Reese Hoffa have long been main-stays in international shot put competitions. Both men are very popular athletes in Our World. Nelson continues to fight for athlete's sponsorship rights. I joined his cause years ago and continue to support the right for runners, jumpers and throwers to get sponsors where they can.

This isn't exactly NASCAR... but runners need to eat too! 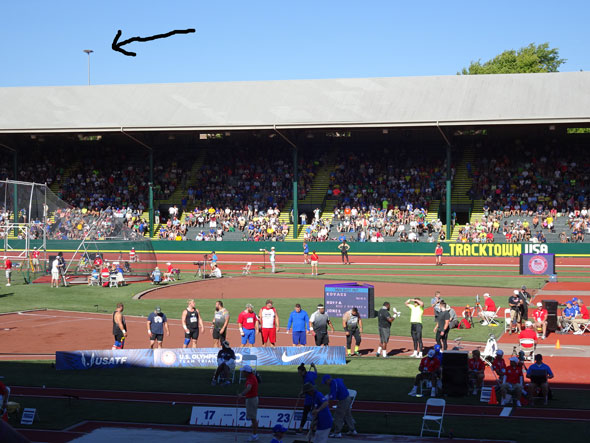 Shot putters being introduced for the final. (Must note the Osprey nest - arrow - mounted on a pole behind the east grandstand. Momma Osprey was flying in and out, out and about, all evening.) 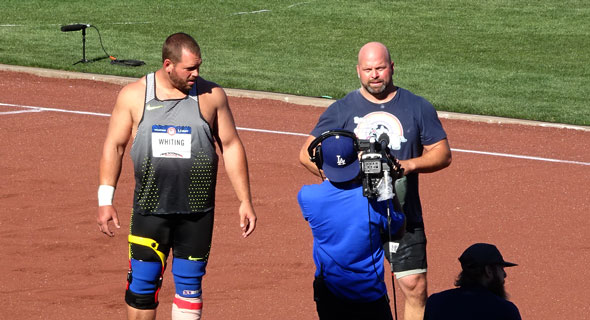 Adam Nelson was introduced to the crowd at Hayward Field for the last time. The crowd roared. This town loves him. Adam will be 41 next week. I like to believe Nelson returned to Historic Hayward Field, not only to get his 2004 Gold Medal, but to give it one last go at throwing the 16-pound metal ball, to delight his fans. Nelson gets extra-credit for wearing a rainbow/unicorn t-shirt his five-year old daughter gave him on Father's Day. This guy is a class act. Thank you, Mr. Nelson for all you have given to track and field.

Neither Nelson nor Hoffa made the US team for 2016. There was a serious changing of the guards this evening in American shot putting. Youngsters taking over. Oregon-native (but just graduated from the University of Texas) Ryan Crouser, 23, finished first, with a throw of 72 feet, 6.5 inches - the best throw of his career. Two other youngsters, Darrell Hill, and 2015 World Champion (Beijing) Joe Kovacs will join Crouser in Brazil. 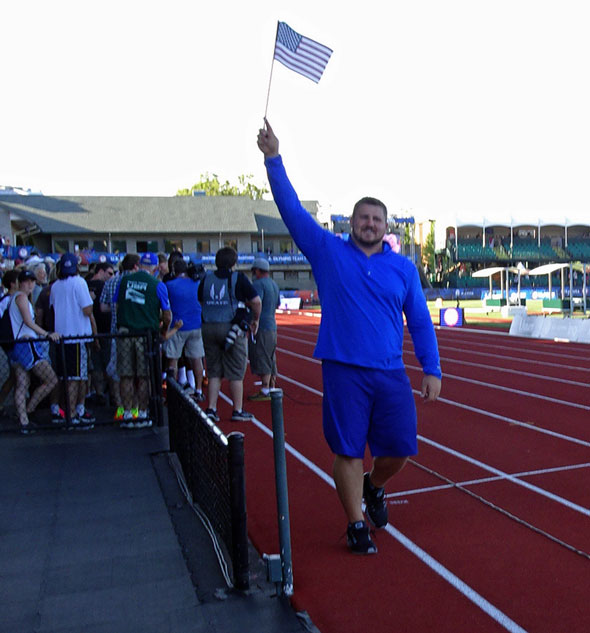 A very happy Joe Kovacs, 3rd in the shot put - packing for Rio

The last event of the evening was the 10000m men's final. Go Big or Go Home. There must have been 24 runners in the race. It was like a pack of cross country runners were released. The surge! Things went all meshuga during the middle of the race when several favorites suddenly dropped out. My favorite, Hassan Mead, dropped on the track for a few minutes, then staggered a bit down the back stretch (in the WRONG direction) and then mysteriously continued along the oval (in the proper direction), flinging his sunglasses and then finally decided - oh what the hell - to just finish the race. Or not. There was a lot of mystery in this race. The official results have seven athletes not finishing. That is a very high percentage. Like I wrote yesterday, it's brutal out there people.

The race was won by Oregon's own Galen Rupp in brilliant form, followed by two guys (Shadrack Kipchirchir and Leonard Korir) in the US Army. One of the guys is 9 months out of basic training! 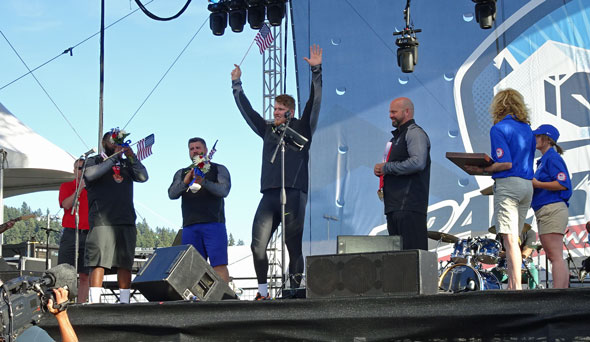 Ryan Crouser, raising his hands to the crowd during his medal ceremony. Adam Nelson, right, presented the medal.

The Track Town staff showed real class tonight by asking Adam Nelson to award the medals to the 2016 US Shot Put team. What a night! 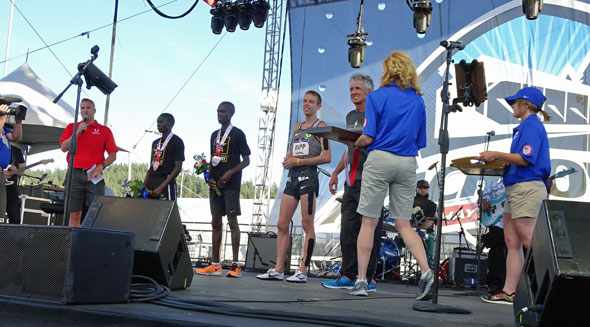 Galen Rupp (and the US Army) received his medal from famed distance great, Frank Shorter.

TOMORROW? The decathlon. The WGA.

Until my next update, I remain, your "young is the new old" correspondent.