Indio, California:  Somehow an entire week has passed since this little blog has been updated, yet there is still nothing to report. Except the weather. Rain Delay. My usual sunny photographs are replaced with this: 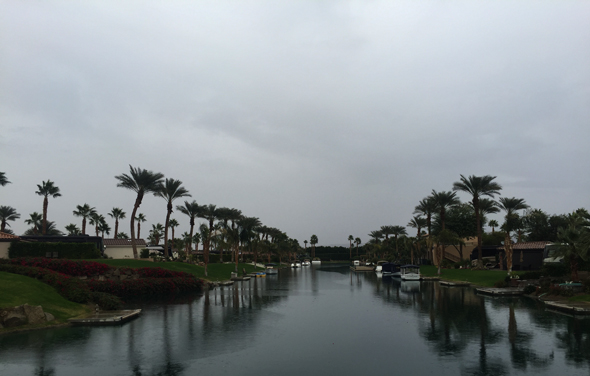 Blech. This resort is like a ghost town. Besides the many who have flown home to spend the holidays with their family, everyone else is hunkered-down inside their motorhomes fighting cabin fever. It rained for several days. Hard, pounding rain. I will not complain about receiving rain in the desert. The moisture is so desperately needed. The change from the usual sunny clear skies just takes a bit of attitude adjustment, exercise rescheduling (or, in my case, exercise ignoring) and wardrobe configuration. (Where did I store my sweaters?) On a positive note, my needlepoint canvas is getting a lot of attention.

The Motorcoach Country Club sent out a "high water warning" via email. There is no danger of the lake actually spilling over - the warning was to remind people to watch the roofs of their boats as they sail under the two bridges in the resort. But no one is boating in this weather. 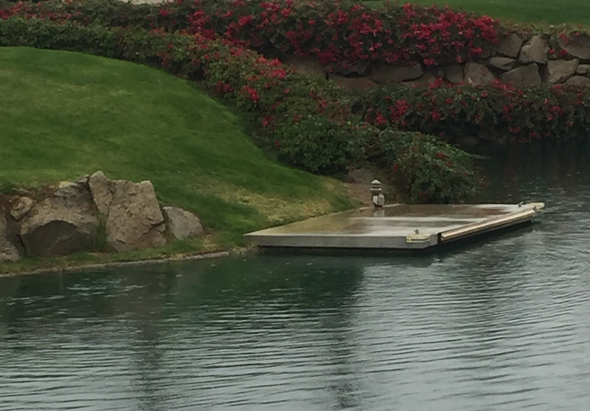 The water level is usually about 8-inches lower

Stuck indoors in cold stormy weather, this old gal turns to baking. I had the new Barefoot Contessa cookbook, Cooking for Jeffrey, and all the ingredients to bake the Irish Guinness Brown Bread on page 186. The recipe is a super simple quick bread, using a can of Guinness stout. The result was wonderful - as is everything to ever come out of a cookbook written by Ina Garten. Super moist, slightly sweet, the Irish Guinness Brown Bread went so well with the lentil soup I served on Thursday, and we have enjoyed a buttered slice for breakfast as well. Very versatile. Though the recipe called for "quick-cooking oats (not instant), I had old-fashioned rolled oats and they worked fine. The recipe includes one teaspoon of vanilla extract. It seemed a strange combination - stout and vanilla - but, wow, the vanilla really popped the flavor to a new level. Umami in Bread. I suspect Santa's sleigh is loaded with copies of Cooking for Jeffrey. I hope he leaves one under your tree. 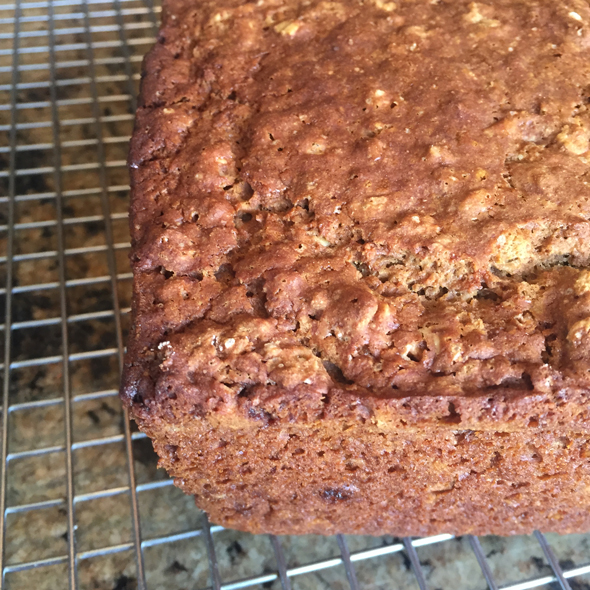 My Driver is down to only two therapy appointments per week and I am happy to announce he has been able to jog a few miles. YES! Just a few. Mostly he walks, but this exercise has made a huge improvement in DT's disposition and he is sleeping well again. The outlook is good for a complete recovery.

We are caring for Our Granddawg, Reese, again. Reese gets walks between rain showers, and at nearly 14-years-old, he doesn't walk far. His family went to Hawaii this week. Yes, we were invited, but really do not like traveling during the holidays - too much chaos... but we are regretting our decision a bit due to our bad weather and the sunny photos they are sending: 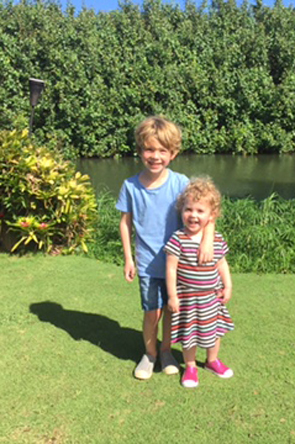 So stinkin' cute. We will see them next week for the last night of Hanukkah and New Year's Eve.

Until my next update, I remain, your latke-frying correspondent.