The other day while I was on the treadmill... zoning out with the Food Network (probably not a good idea to watch Food TV while on the treadmill???), I watched Rachael Ray roast a chicken. No big deal. I roast a chicken nearly every Shabbat we are home/in the bus. However, when Rachael was finished with her chicken, she threw a bunch of fresh spinach leaves over the potatoes (etc) in the roasting pan. The fresh leaves melted into the hot veggies. Hmmm... gave me a great idea. (Of course, Ms. Ray also laced her roast chicken and veggies with ample roasted garlic gravy... which will not be discussed on this website.)

Tonight I prepared a lovely organic, free-range, (probably very happy until-someone-cut-her-head-off) chicken for my roasting pan. I lined the pan with a few fingerling potatoes, carrots, a sweet potato and a bit of Italian onion. On top of the veggies I placed the five pound happy chicken - which I had stuffed with a chopped lemon and rosemary sprigs. I coated the bird with olive oil, salt and pepper. 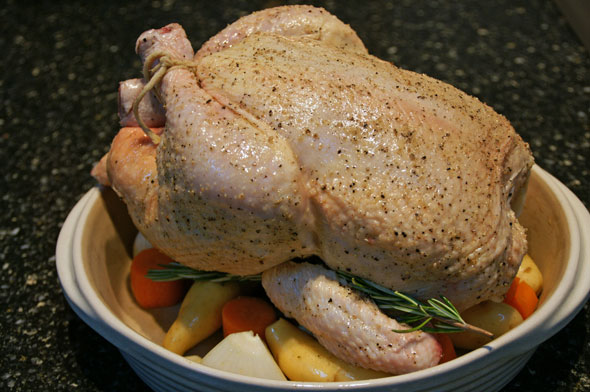 Ready for the oven: chicken with vegetables 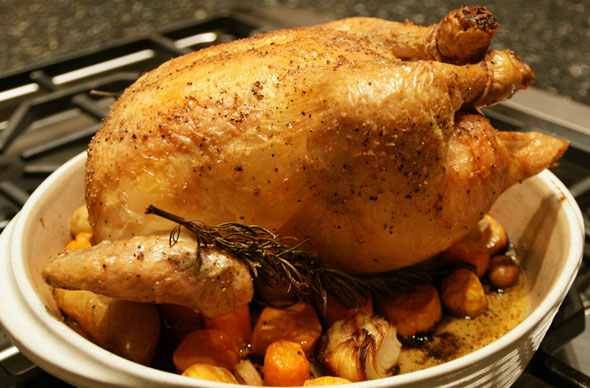 After the bird was cooked, I removed the chicken to a carving board (this is DT's domain) and tossed a bunch of arugula leaves into the cooked veggies. In a few moments the arugula had wilted and when I tossed them into the roast vegetables, became a perfect accompaniment to our beautiful bird. 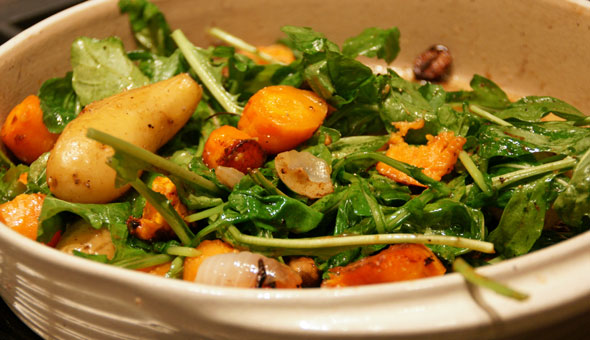 Can you even remember when adding arugula to anything didn't improve the dish? I probably will not cook a chicken this way very often - too fatty - but dang, if it wasnt delicious.

Until my next update, I remain, your wilted correspondent.