Indio, California: This could be a new record - an 11 hour round-trip to Los Angeles. We drove over, watched the Redskins lose to Seattle, had dinner with the kids, helped put the baby to bed and then returned to Indio. We brought our overnight bags, but when the baby went to sleep at 8 o'clock, we decided to sleep in our own bed, rather then fight Monday morning LA commuter traffic.

Lenny prepared his Award Winning Onion Dip, but the luck-giving routine just wasn't enough to keep the Redskins in the game. Their exciting quarterback, Robert Griffin III, was ailing and limping. Towards the end of the game, his knee "buckled" in a grotesque configuration. Hopefully, the injury is not serious and Griffin will be completely rehabbed by fall.

Lenny's Redskins are finished for the season. 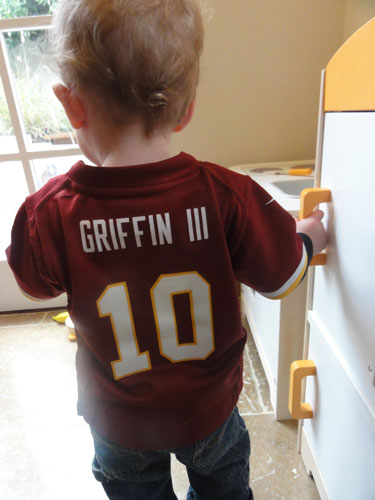 And this little guy will need a larger jersey next year. When this season started, Leo was swimming in his RG3 jersey.

Speaking of football... you may have heard reports this weekend about Oregon coach Chip Kelly leaving college to coach in the NFL. Cleveland, Buffalo and Philadelphia were mentioned. Apparently Coach Kelly met for hours on Saturday with the Browns. I predicted to my friends Chip would remain at Oregon and I was right. He has a pretty sweet deal, a ridiculously high salary, tremendous support from the university and community, and obviously one of the best teams in the country. Only four years under Kelly's directions, the Ducks have been to a BCS bowl game each year - winning two. Kelly has lost only seven games in 4 years. I'm not saying Coach Kelly won't eventually move on to the pro circuit, but for now he remains a Duck and we won't have to go through this again - until next year. I do not know Mr. Kelly, but I'm guessing he wants a BCS title on his resume.

One last game for DT to watch - the BCS Championship tonight.

Now it's time for college hoops!

The wheels on the Magna Peregrinus are beginning to turn square from sitting so long. Dave and I are making plans for a road trip. Our route will be influenced by the weather, which seems to be cold nearly everywhere in January. There are a few places we would like to revisit and a few places we have yet to explore. Stay tuned.