Carlsbad, California:  Everything is still awesome. (If you don't know, Everything is Awesome, is the title song from the Lego film. I heard it at least a dozen times over the past few days.)

Up early and to the dining room for our breakfast (included in room price). Good selection of everything except fresh fruit. We are practically in Mexico here. The weather is warm. No excuse for cubes of cantaloupe and honeydew and bananas. Just my opinion.

While at breakfast, a strolling minstrel came to our table. I told him Leo was only a "G" short from being Lego and the entertainer immediately came up with a song for Leo, adding a "G". So clever.

Hotel guests have access to the park one hour before it officially opens, so we began our long and busy day. 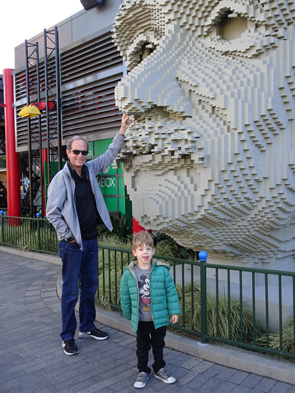 I would pick his brain, but DT is picking Einstein's nose. The head is built using over one million Lego bricks! Leo the Lion posing for his Bubbe.

We all climbed on the Coastal Cruiser boat for a ride around a lake to view hundreds of things made from millions of Lego. Below are photos of an elephant, the Sydney Opera House, Mount Rushmore (with a work crew cleaning George Washington's ear with a Q-tip), the Taj Mahal, Eiffel Tower, Statue of Liberty and the New York skyline (made with over two million Lego). 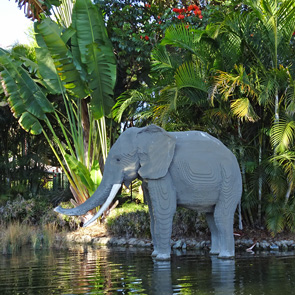 Climbing on a burro and choosing car parts 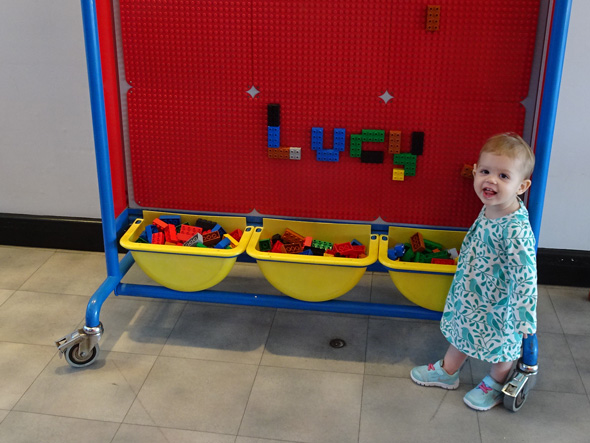 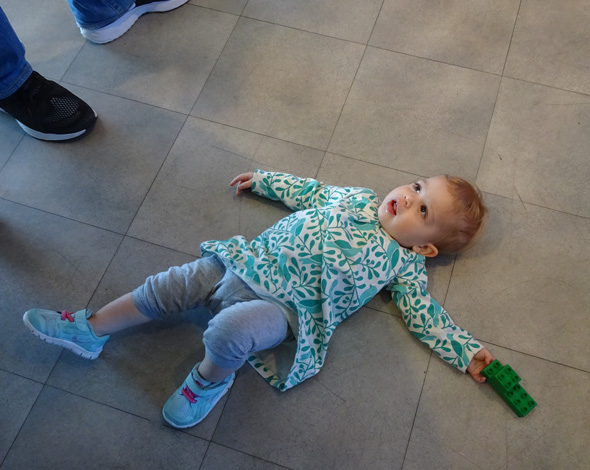 When you are tired, just plop down. Why not?

Dave, Lenny, Lisa and Leo went to a roller coaster. It was a proper roller coaster too - not a puny thing made for little kids. Leo's hair was a bit spiky today, so he was tall enough to go on the ride. Lucy and I watched from a shady bench. Here are 4 hair-raising seconds of my family in a free fall. (Available in HD!) Leo loved the roller coaster.

Lenny, Leo and Dave decided to go on another roller coaster, so Lisa and I waited with Lucy. Lucy found a slide and had a fun time playing while her Bubba, Dad and Brother had an adventure. 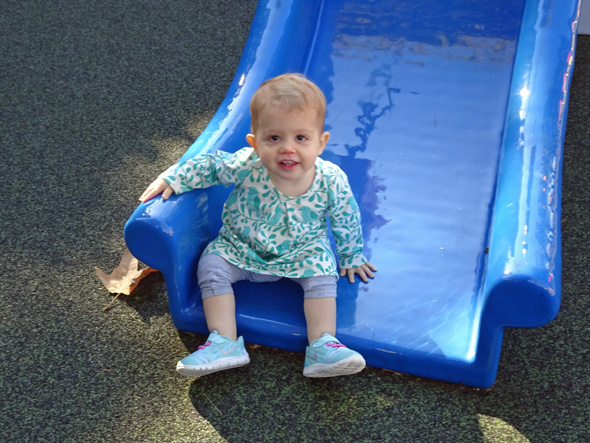 I can't handle the cuteness. 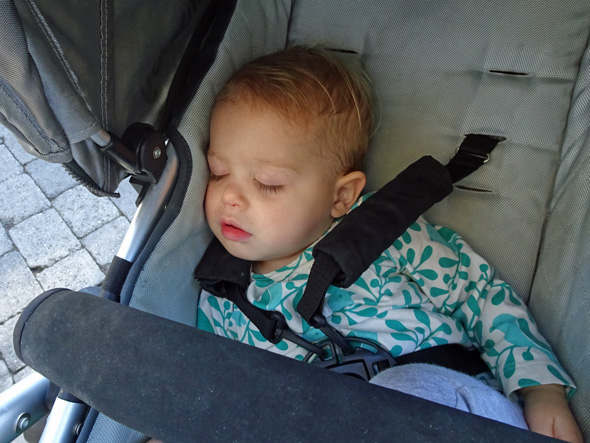 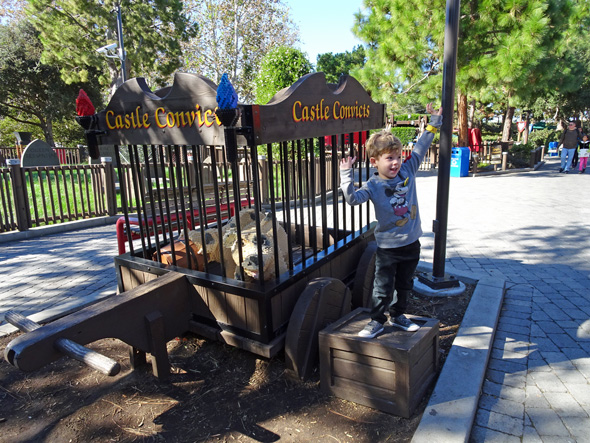 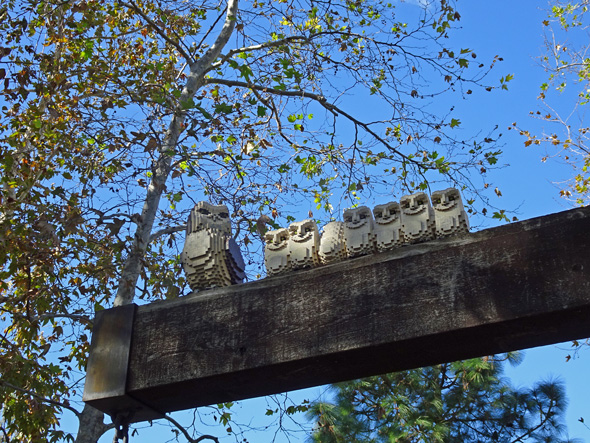 Cutest owls - seriously, hundreds of Lego figures throughout the park 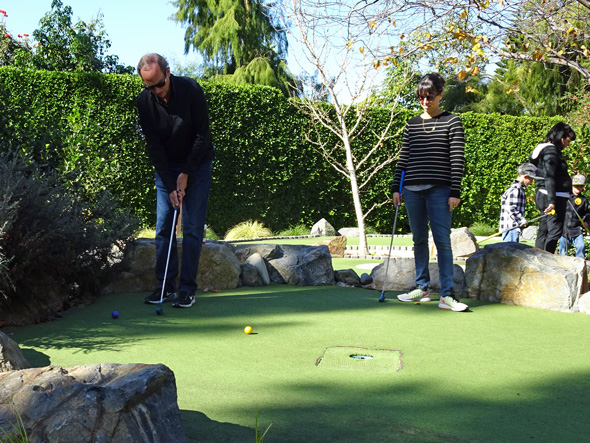 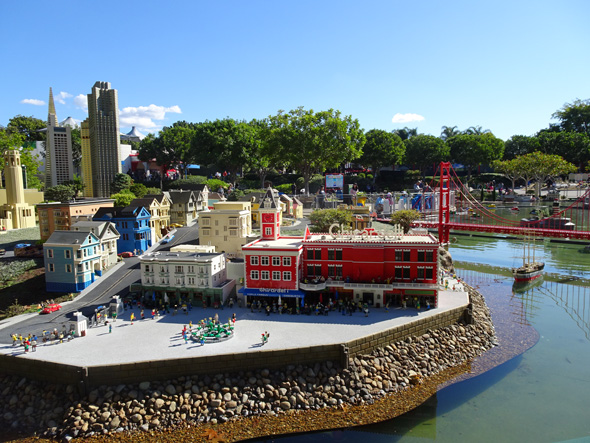 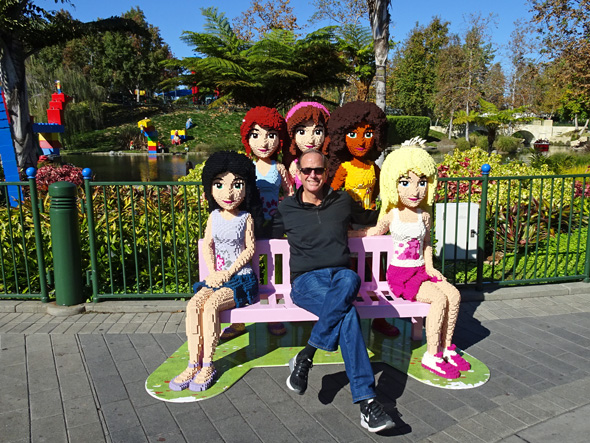 After a lunch break, my family pored over the park map and a strategy was developed to visit anything we had missed and to revisit anything Leo wanted to try again. 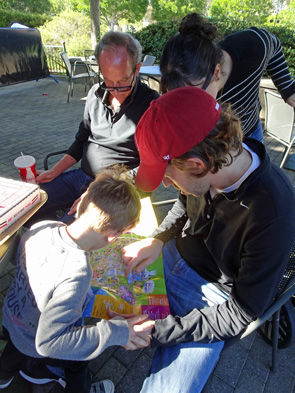 I think Lenny really liked this ride, even though he was unable to drench his favorite Mother-in-Law. Six-second video, also available in HD:

Leo was very well behaved (most of the time - come on, he's a 4 year old kid), so was allowed to choose one gift from the massive gift shop at the park exit. He chose a kit to assemble. (I hope to not have to help with that chore.)

What a great two days. I recommend this park for kids from 4-8, especially if they are at least 40-inches tall. Most of the rides require 40-to-42-inches. If you can at all swing it, stay at the Legoland Hotel (it is crazy expensive, but basically inside the park). Plan several days as an aquarium and (in season) a water park are included in a park hopper ticket.

The kids headed back to Los Angeles. Dave and I took the winding road up over the mountains and dropped back into the Coachella Valley just at sunset.