Carlsbad, California:  For several weeks, Lisa and Lenny have been planning a little surprise for Leo. Very much into Lego, they decided to take their four-year-old son to visit Legoland in southern California. Bubba and I were invited to come along, as we would be visiting for the Thanksgiving holiday. 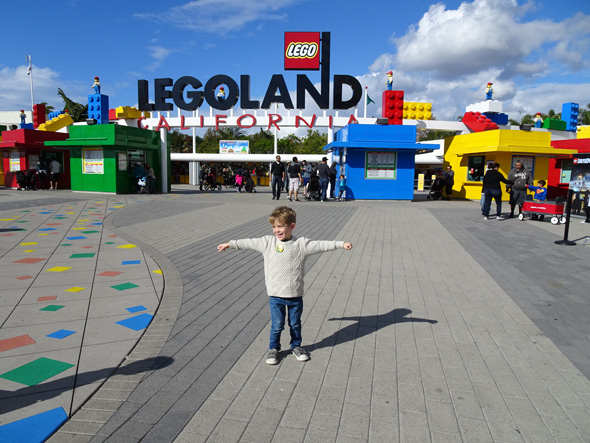 Photo of a very happy boy

After putting the dishwasher through about five cycles after the Thanksgiving feast, we were all up early this morning and on the road (south on I-5) to Carlsbad (just north of San Diego). We checked into our rooms at the Legoland Hotel and went immediately to the theme park (which is about 100 steps from the hotel). The hotel have three different room "varieties" - Kingdom (decorated in a castle theme), Pirate (decorated in a swashbuckler motif) and Adventure (not sure, did not see this room, but I bet it is adventurous). 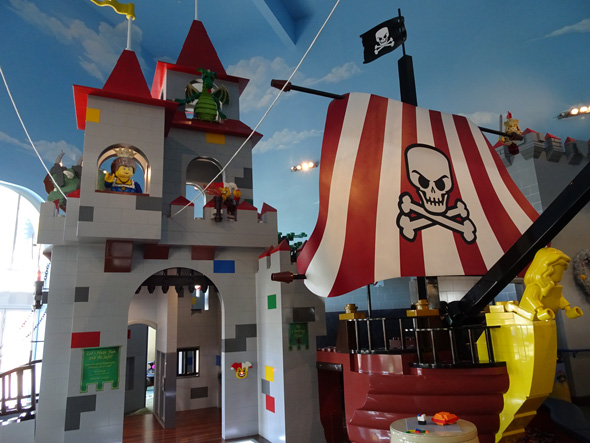 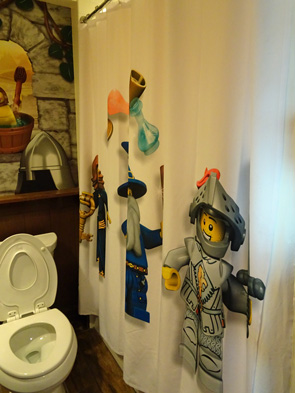 Kingdom themed room: A King bed fit for a King and the bathroom has a toilet seat inset for wee bums. 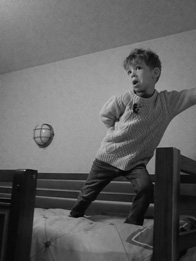 Leo was obviously super excited to check out the bunk beds

No matter the "theme", rooms have the same configuration: A king (or two queen) beds for adults and a sleeping alcove for the kids with bunks + a trundle. The room also includes a bathroom with tub/shower, reading chair, desk, big screen TV, mini-fridge, Keurig coffee maker and safe. Wifi, coffee, tea, bottled water and juice boxes were free. (Well, not exactly free. This is one of the most expensive hotels we have stayed in for quite some time... and don't forget we went to Asia this summer...) Kids have a second television in their alcove. Dave and I had a Kingdom-themed room; Lisa and Lenny had a Pirate room!

The first thing we did after entering the theme park was have lunch. Traffic had been terrible (Black Friday shoppers!) on our trek south and we were all very hungry. 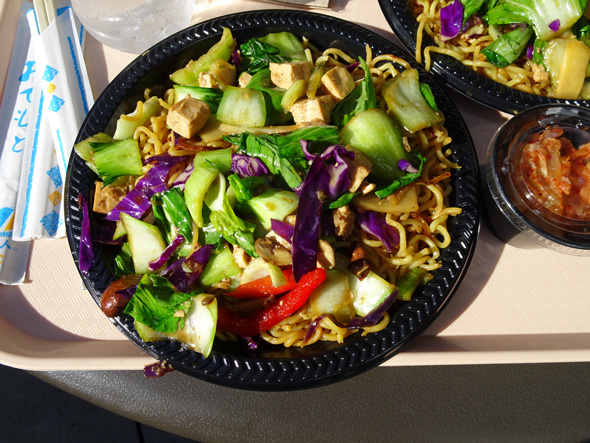 Fried ramen noodles with veggies (and a side of kimchee) fueled us and we were soon ready to explore Legoland.

I am going to post a bunch of photos of (some of the) attractions we visited this afternoon: 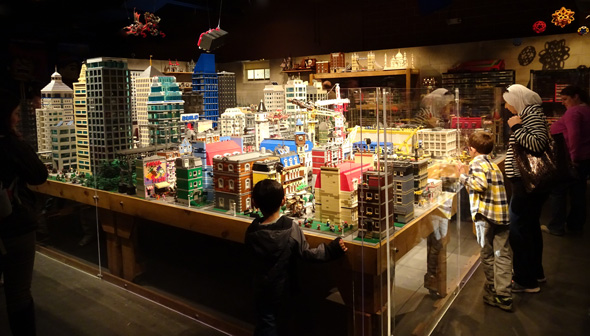 We visited the set of the Lego movie. 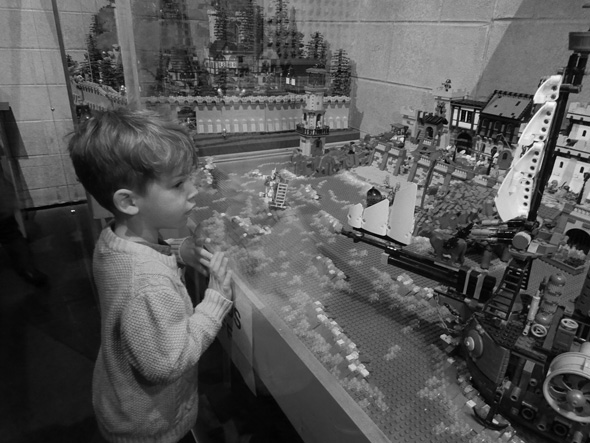 Leo was so impressed with the movie set display. When asked what he wanted to do next, he said he wanted to go back to the hotel and build stuff with Lego. 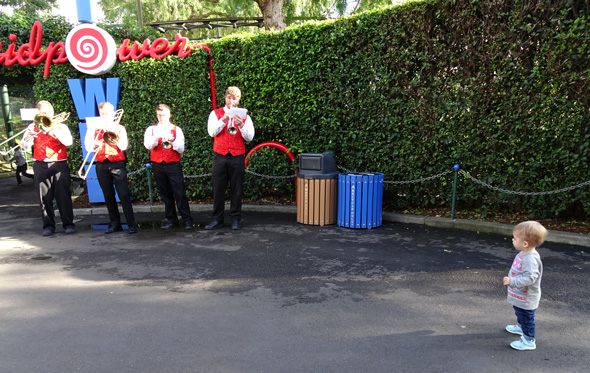 Lucy was pretty impressed with the band wandering around the park 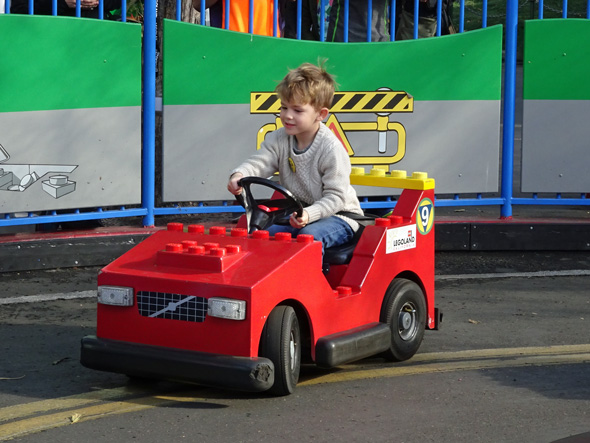 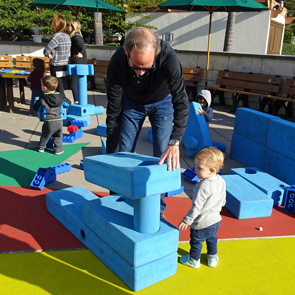 Bubba played with Leo in the snow (real snow!) and helped Lucy build something.

Lisa and Leo went to stand in line for the Skipper School boat ride, so Dave, Lenny and I had an hour to spend entertaining Lucy. Legoland has this down. Everywhere a ride is offered, there is also an area to entertain younger siblings or aging grandparents (or both). 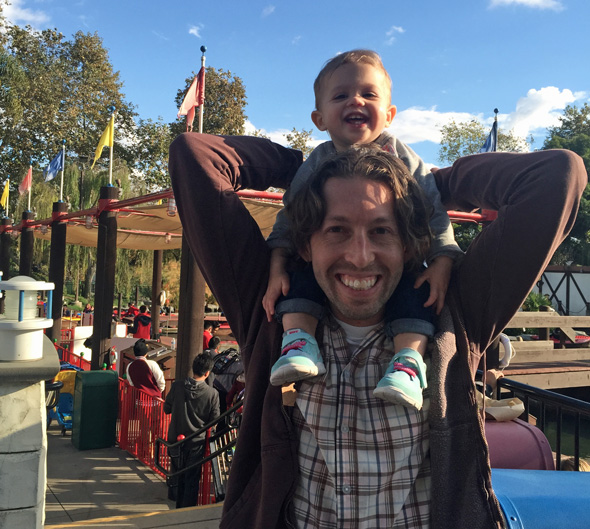 This is how we do Black Friday 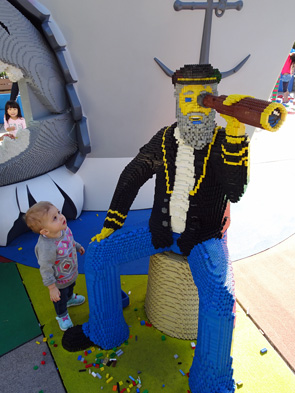 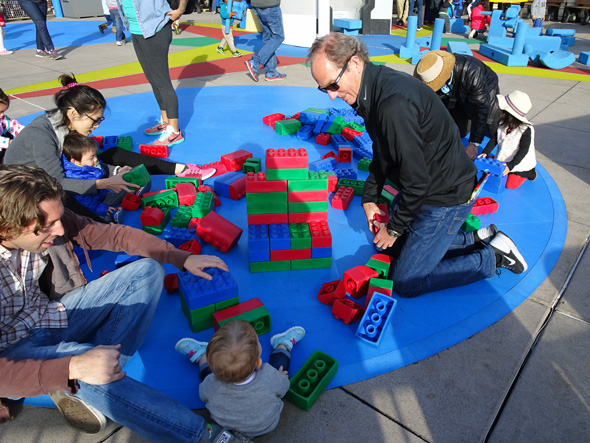 Bubba built the Princess a throne with LEGO SOFT Bricks 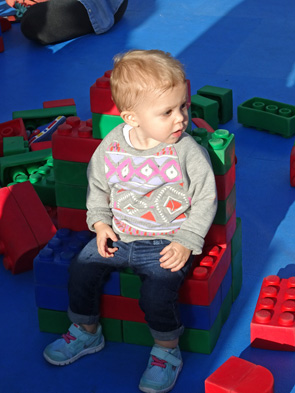 Meanwhile, after waiting in the sun forever to get on the boat ride, Mr. Leo was not too happy to learn it only lasted two minutes. Major meltdown. Poor guy. Life is so unfair. 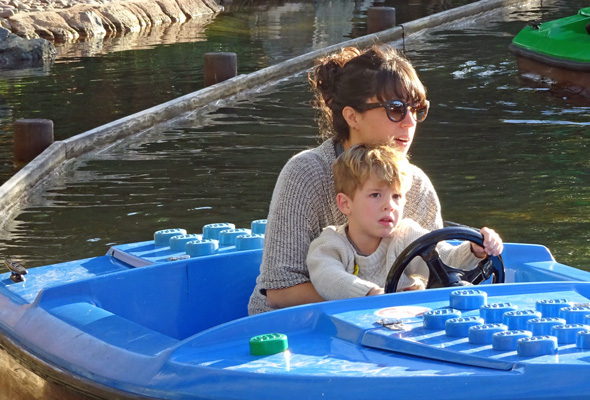 Dave, Lenny and Leo spent a little time playing arcade games. Dave should have saved his shoulder and simply given his cash to the attendant and walked away. For kids, there is a "everyone is a winner" policy, so our little lefty won a stuffed fish. 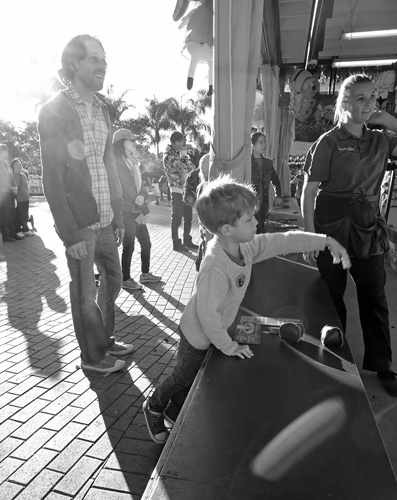 We were back to the hotel before dark. The hotel has the best set-up for adults and kids to stay/eat/party together. 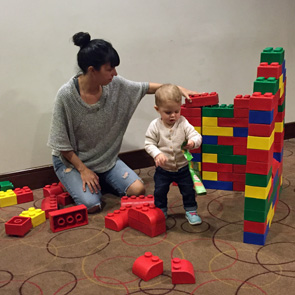 The lobby bar has Lego bricks. Lisa is pretty-sure the LEGO SOFT Bricks

Next to the lobby bar is a huge pirate ship filled with Lego. Build away. It is impossible to not begin clicking the bricks together.

The hotel has so many activities in the evening. Character Meet & Greet. Model building competitions. Kids Pajama Party. Magic show. Swim-in Movie at the (heated) pool. Disco Dance Party for the kids. Hotel guests also have early access to the park.

We had dinner at the Skyline Cafe. Pizza, salads and deep fried green beans with Sriracha mayo. While we were dining, a knight stopped by to have a chat. Lucy made sure he knew what was what. 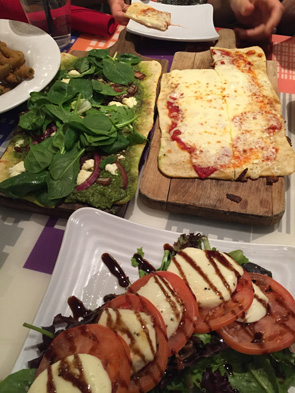 Leo danced for over an hour at the dance party after dinner. So. Much. Fun.

My pedometer nearly blew up today. Over 11,000 steps and I did not "exercise". This Bubbe Business is tough work.

We go back to Legoland in the morning.

Until my next update, I remain, your awesome correspondent.