Gila Bend, Arizona: We said adios to our pals this morning - they are headed to Palm Springs - and departed for as-yet-unspecified destinations east. Our departure was a bit delayed due to a conference call requiring DT's attention. We weren't sure how far we would progress today, especially since I always like to stop at the Cardenas Market in El Centro, California. Except for the farmers market last Friday, I had not reprovisioned the Magna Peregrinus for quite some time. We were completely and totally depleted of powdered dishwashing machine detergent!

Emergency! You all know I love the Cardenas Markets and the one in El Centro is simply humongous and the food is practically free. Five Haas avocados for 99¢. Six jalapeno peppers, 25¢. Cilantro, 49¢ per bunch. Three bell peppers for 99¢. On and on. But we come for their grilled chicken and today Cardenas had an eight-piece special: 4 thighs, 4 legs, a two-dozen tortillas, salsa, rice and refried beans - $4.99! 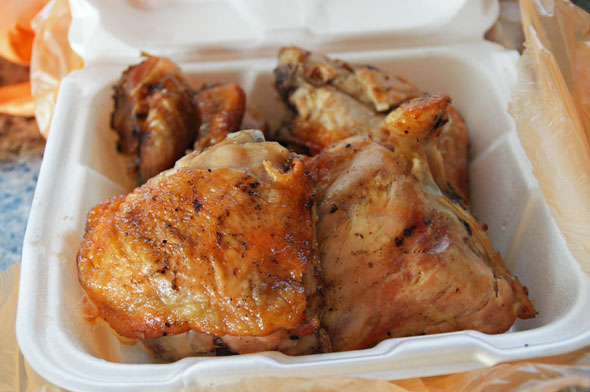 So juicy and lovely. Back in the RV, parked in front of the market, we shredded a thigh and put the meat in a tortilla with fresh salsa - taco lunch. Obviously taco dinner and possibly taco breakfast as well. There was a bit of excitement in the parking lot when three police cars swarmed down upon a young man. They had him handcuffed and one of the officers donned blue surgical gloves to examine the boy's mouth (I think?). Not sure what this was all about. 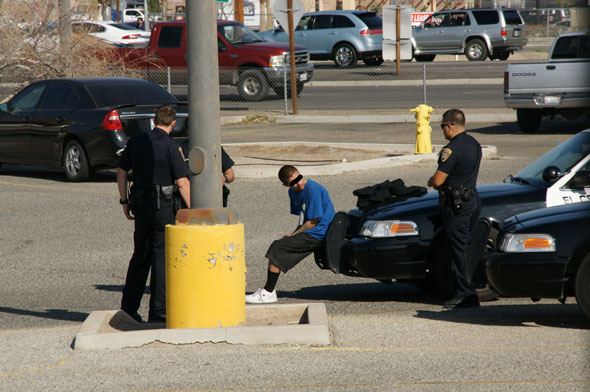 The boy (face blacked out) must not have been hiding/doing anything unlawful, because after about a fifteen minute interview, the kid was seen walking across the parking lot. Get Out of Jail Free card? At El Centro, we hopped-on the I-8 and headed toward Yuma. But we did not stop in Yuma. You may wonder why we did not stop to visit my Dad and his wife in Yuma? Because they are in Hawaii, that's why! Arizona does not follow daylight savings time, so we lost an hour crossing into Arizona.

Just west of Gila Bend, we came across the under-construction Solana Generating Station - a massively huge solar power-capturing facility. The power plant looks like thousands and thousands of inverted aluminum-foil half-circles in the middle of nowhere. Amazing, and it will power 70,000 homes!

We called it a night in Gila Bend's Augie's Quail Trail RV Park just before dark. Augie was full for the night, but had a spot in their large overflow/dry-camping area. We are parked in sand with about a half-dozen other over-nighting RVs. 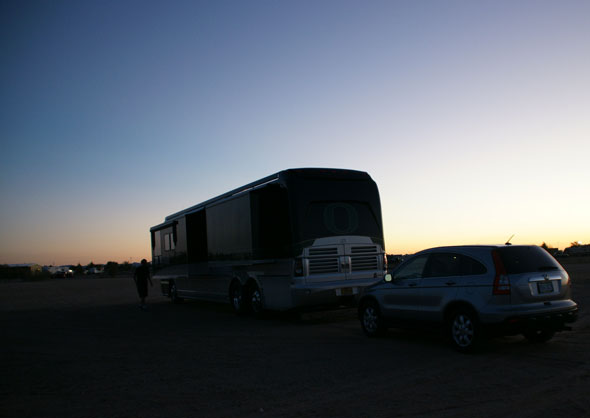 We did have more tacos for dinner and I heated up the refried beans for a little appetizer. Served with chips, the beans were a great way to end the long day of driving - 245 miles - with a cold beer. 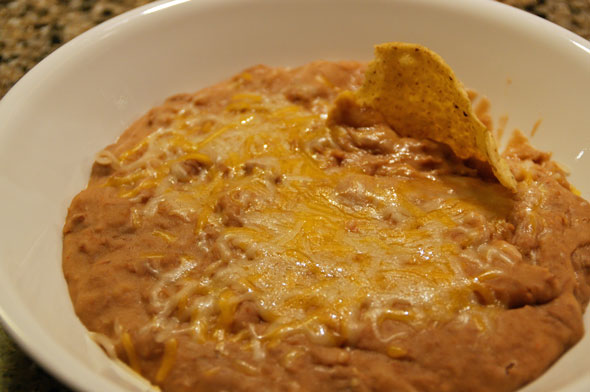 I'm going to stretch our $4.99 chicken deal into at least three meals.

In other news, the University of Oregon scored a few very good football recruits on National Signing Day and several of the guys also run track. GO DUCKS!

Until my next update, I remain, your thrifty correspondent.