Vienna, Austria:  Trying to adjust to our new time zone, we happily slept well and met our friends in the hotel lobby for coffee and a pastry at one of the oldest coffee houses in Vienna - Cafe Central. Legendary "Centralists" - such as Sigmund Freud, Vladimir Lenin and Leon Trotsky have patronized this gorgeous cafe, which has a wall famously flanked with massive portraits of Franz Joseph and Empress Elizabeth. 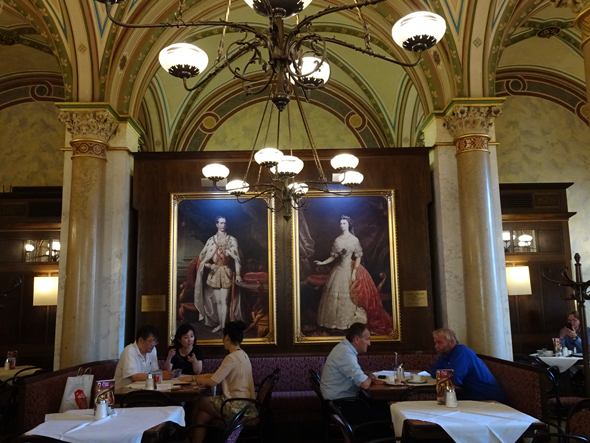 Cafe Central is also famous for their apple strudel, so that was my breakfast choice. 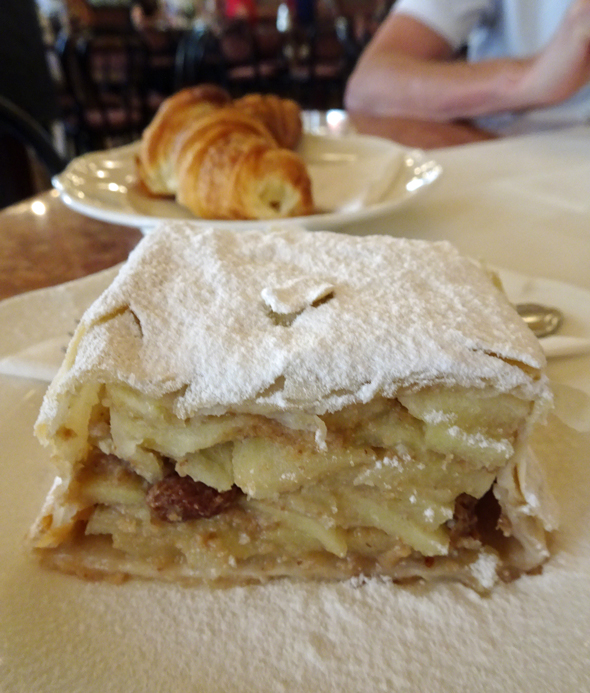 While the taste was nice, the apples were far too crunchy to win me over. Everyone had traditional breakfast fare - coffees and croissants... but there is much to tempt/choose from at Cafe Central. 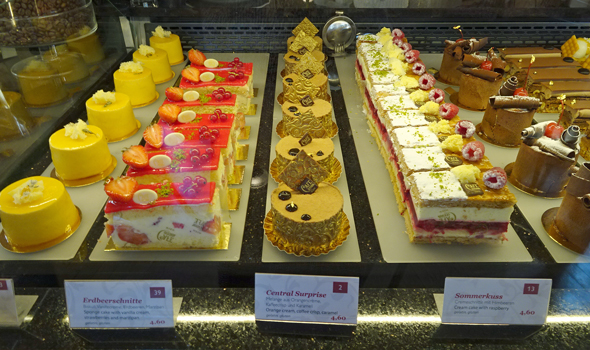 Our plan for the day was to ride one of the hop-on hop-off double-decker tourist buses that travel the city streets to get a lay of the land. Though central Vienna is very small and very walkable (if one isn't walking with a knee brace and cane), we opted for this highlight tour this morning and exited the tour at St. Stephens Cathedral (circa 1147). 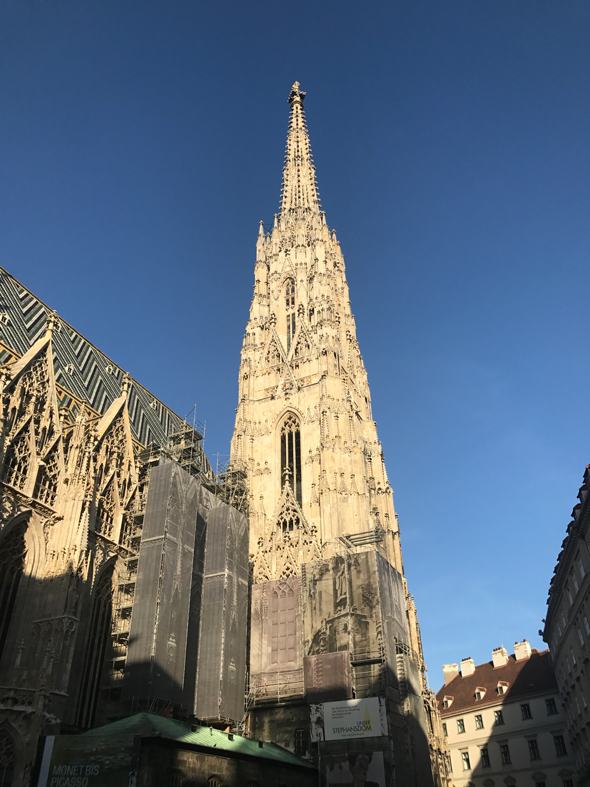 We rode a teeny elevator up to the top of the bell tower to see the views. Lucky for us, there is a wire mesh cage protecting visitors, or we would have been blown off the roof by the gusty winds. Not only were the views fantastic and far, the bell tower allowed us a close-up inspection of the unusual colorful tiled roof pattern. 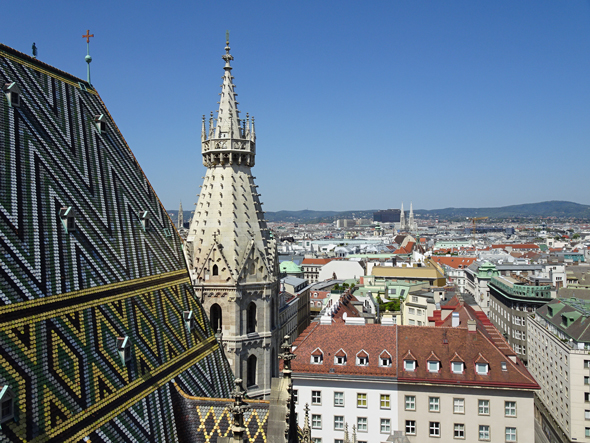 After our drive-by city tour, we walked a few blocks for lunch at another famous Viennese in the Hotel Sacher - and a slice of their famous torte. 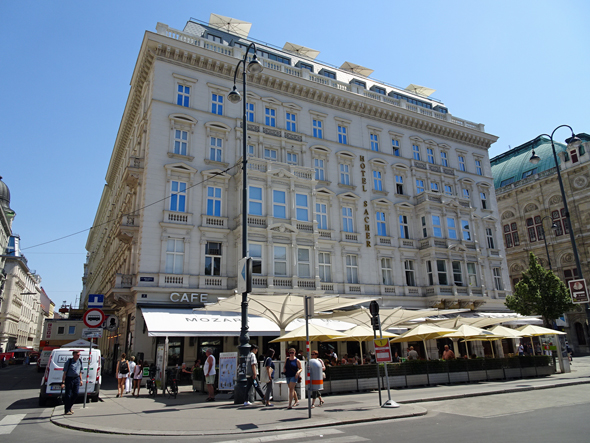 We dined outside in the Cafe Mozart 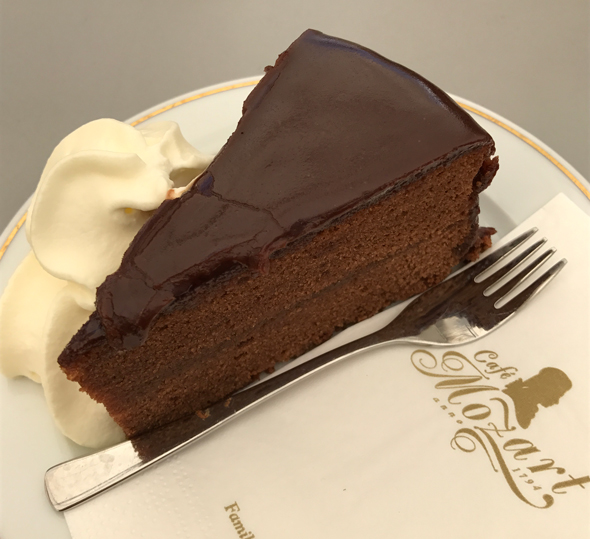 The torte is chocolate with a layer of raspberry sauce.

It wasn't the best chocolate cake I have ever eaten, but now I can say I have dined at the Hotel Sacher and had a slice of cake. We all had very nice salad lunches as well.

The plan for the afternoon was to ride another hop-on hop-off ring route that went up into the surrounding hills, allowing passengers to visit several vineyards. This plot was squelched due to the exceptionally hot - over 90° - temperature, making riding in an open-air bus quite uncomfortable. Instead, we opted to spend the afternoon exploring the Hofburg Place area. 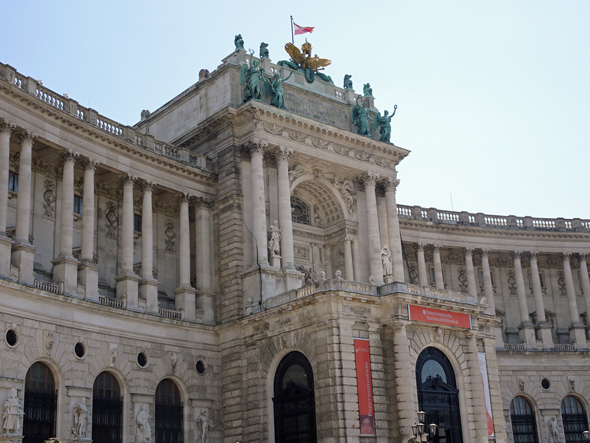 I would love to show you photos of the most beautiful library in the world, but no one could figure-out how to gain entrance. Every door was closed and there were no staff to help the throngs of tourists and students. So annoying! 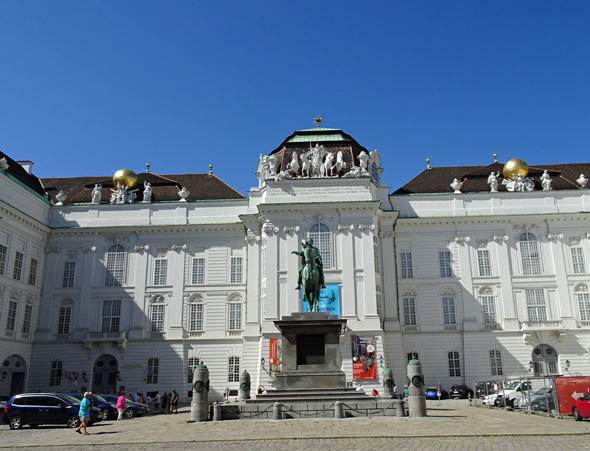 Every building in Vienna seems to be massive, gorgeous and has a statue of someone on a horse 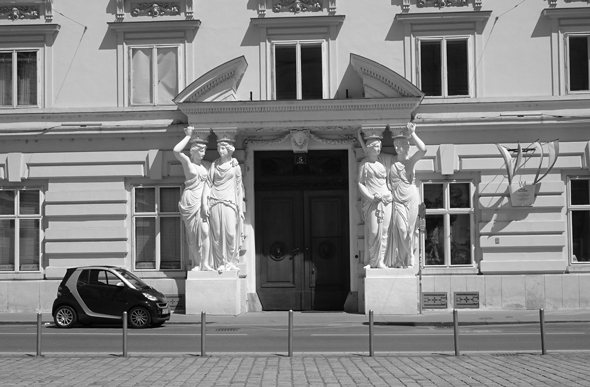 We toured the Sisi Museum, which currently features self-guided walking tours of living quarters and household silver and china collection of the Austrian court, specifically Elizabeth (aka Sisi), Empress of Austria and Queen of Hungary. (Why just rule over one country, when you could rule over two?)

Poor girl did nothing to ask for these royal titles, except marry the Emperor. She gave him four children and her mother-in-law snatched them up at birth and raised them, allowing the Empress hardly any access to her own children! It was a rough life, though one immensely ornate. Elizabeth opted to spend time away from Vienna and was not popular with her people until she died - after serving as Queen for 44 years. Maybe because she was so beautiful? Maybe because she was stabbed to death by a crazed anarchist in 1889? No idea, but now she is adored. 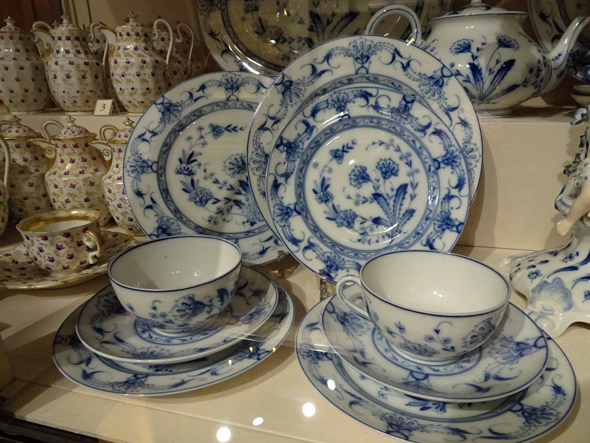 We saw hundreds of thousands of dishes. 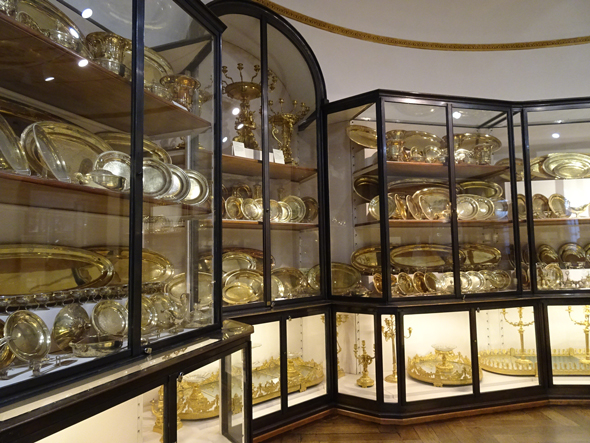 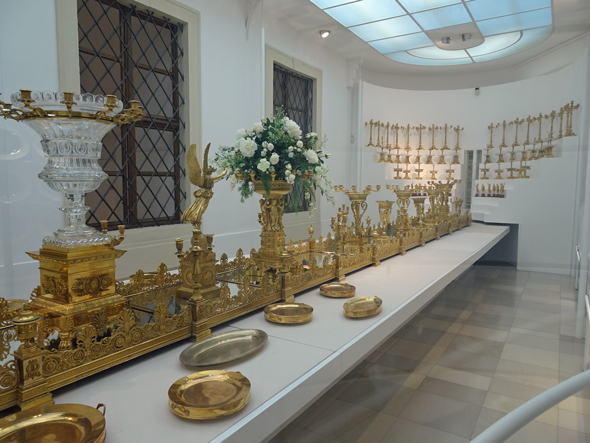 This mirror-lined centerpiece was made for a coronation banquet. The tall crystal flower urn is the center point of the piece - this photo shows only half of the centerpiece.

The upstairs living quarters were also interesting and ornate, and we were able to see how the family lived, slept and dined. Many of Elizabeth's gowns were on display, along with a replica of her train car, and countless painting of the Emperor and Empress. No photos are allowed in the living quarters, but there is a photo tour here.

After a nice rest (nap!) in the air-conditioned hotel, we took a taxi out to a beach-bar-type place, the Strandbar Hermann, on the Danube Canal for a cocktail before dinner. 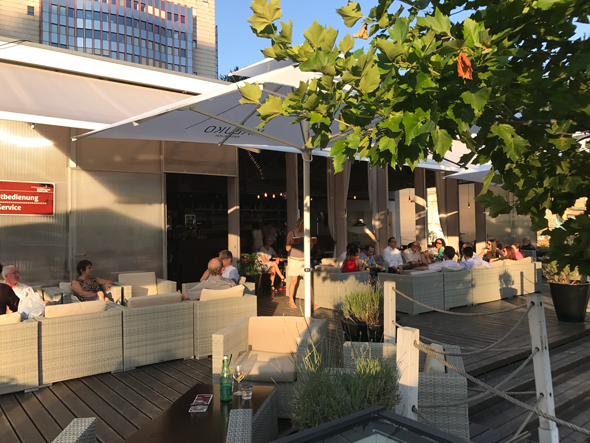 The bar was quite interesting - all self-service at several bars placed around patios and chairs placed in sand. After drinks, we Ubered to our reservation at Plachuttas Gasthaus zur Opera - for the most popular dish in Austria - Weiner Schnitzel. 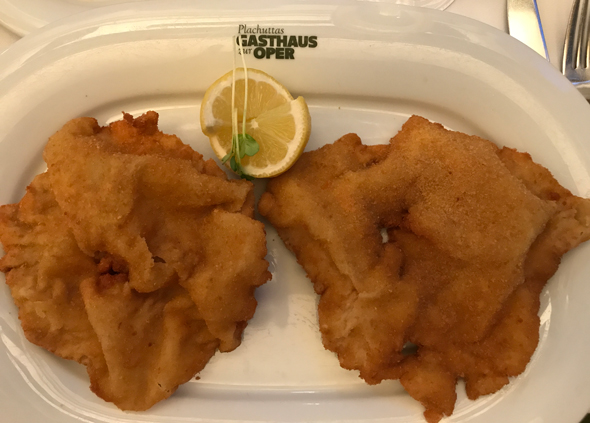 Where the strudel has been only so-so and the torte underwhelming, the Weiner Schnitzel was perfection. I was so happy! Our servers were amazing and so helpful - even when spilling tomato soup around our table. With such great food, service and company, it made for a perfect evening in Vienna. 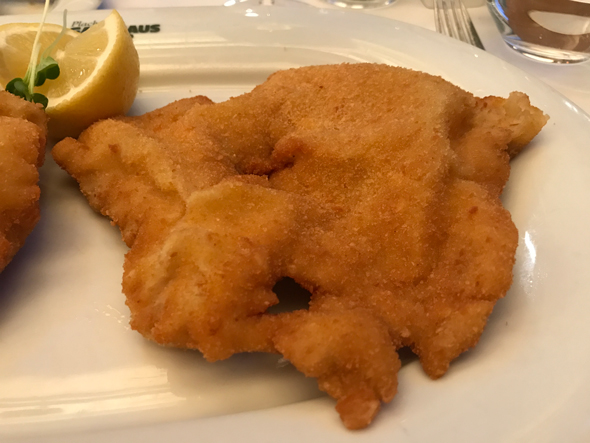 Until my next update, I remain, your schnitzeled correspondent.

My review of our hotel in Vienna: Steigenberger Hotel Herrenhof

You may also like:
Austrian Tourist Board
City of Vienna travel info