Pacific City, Oregon:  The weather continues to be an issue. It rained overnight so we had to jog in a soggy mess this morning. I really really really didn't want to run at all - using the rain as an excuse... but I knew I would regret it later and no one probably ever says "gee, I wish I hadn't worked out today". By eleven o'clock we had put our things in the "stow" mode and headed to Pacific City - about one hour north.

The sun tried to show-up and at times the sky would look a little brighter... but by the time we arrived to our next destination, it was full-on raining. 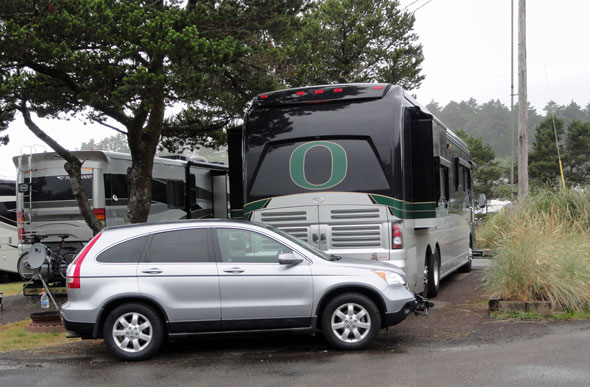 The folks at Cape Kiwanda RV Resort put our 45-foot bus in a 48-foot space, so we are a bit tight. Due to the pretty tree over our bus, we do not have satellite internet tonight (but we do have satellite television - go figure). The park offers free wifi (though it is slower than molasses) or I can use my iPhone as a hotspot connection because I am super geeky like that.

We have camped here before, though it was a very long time ago. They have built a very nice reception building with a gift shop, fresh fish counter and grocery. A motel and a pizza place are also on the property now. I can't note many improvements in the RV park however. It looks a little sad, with many long-term live-ins. And at $42.67 (with our Good Sam discount) it is just not a good value. We are paying for location - the RV park is just across a little road from the beach. 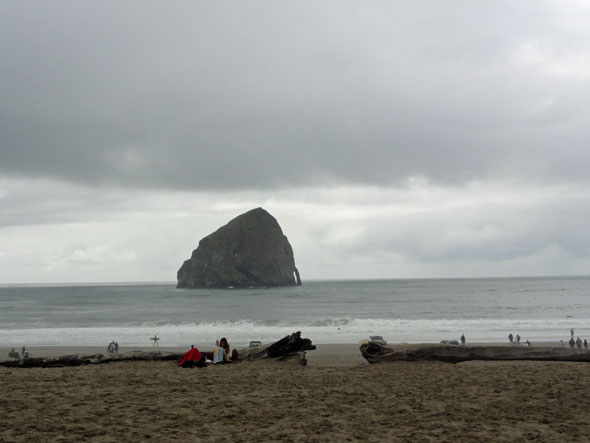 Pacific City holds an annual race around that rock - in dory boats.

It is a great beach too (with a huge monolith), in a cute little town with a great brew pub.

You may think that all we do is camp next to brew pubs, but the truth is, you can't throw a rock in Oregon without hitting a brew pub. 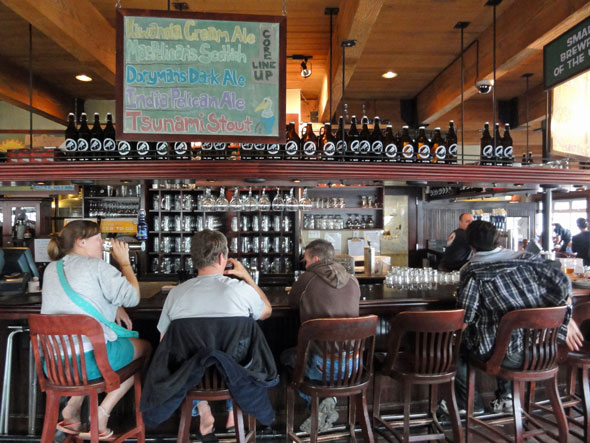 rust me. Anyway you know I would never exaggerate.

We walked in the rain to the Pelican Pub and Brewery for lunch. The Pelican is right on the beach, with a view of the massive rock. 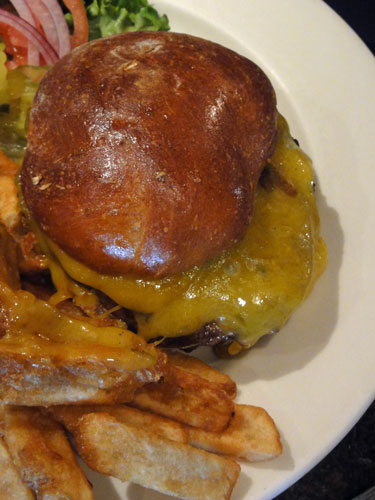 DT had a cheeseburger and a pint of their Scottish-style ale, while I had the far less complicated black beans & rice (with a sparkling water) because I am so health conscious really have been eating too much fish and didn't feel like a burger. 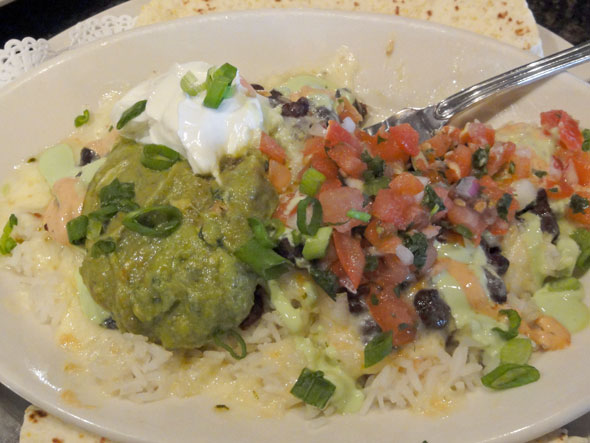 Plus, I just love me a big plate of rice & beans. 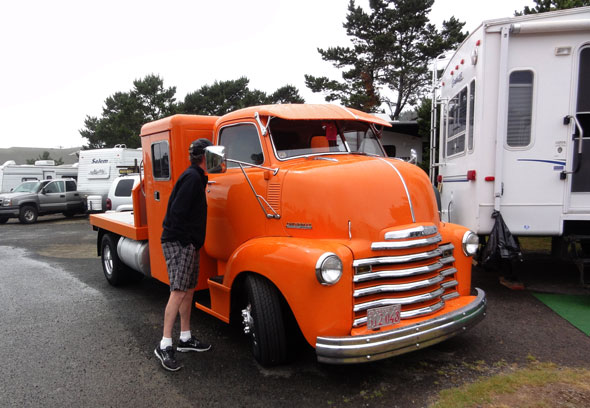 Our neighbors had this totally tricked-out 1948 Chevrolet customized to tow their fifth-wheel!

About 8 o'clock, after napping and laundry and watching the rain... we walked to the parking lot of our RV park office for pizza at Doryland Pizza. Doryland served-up a very decent pizza. 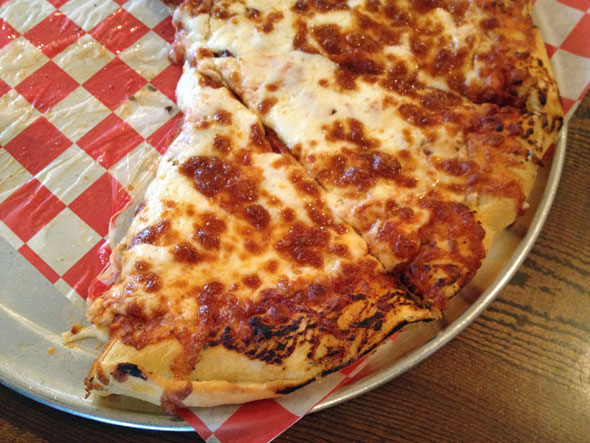 It was super hot, super cheesy and gooey. We asked for plates and were referred to a table by the front door with a stack of very flimsy paper plates. We had to go to the salad bar for knives and forks. (Yes, I know in America pizza is eaten with the hand, but this pie was so hot and so thick and so heavy - it required a knife and fork.) Thing is, the pizza soaked immediately through the paper plate, and the plates tore from the pressure of a knife.

I noticed a stack of sturdy plastic plates at the counter, so walked up and politely asked the dude for two plates. He informed me those plates were for the salad bar. I asked him if I could please have two plates to use while we ate our dinner. He said no. They were for the salad bar. I very kindly asked him if it would not be possible for him to make an exception so we could eat our dinner. He finally consented, but told me I could not make a habit of using their plastic salad bar plates for pizza! Seriously. I informed the rule-breaker that I lived in Portland, so his precious stash of plastic plates would not be habit-forming. (Well, okay, so I am a lady and didn't exactly use those smart-a$$ words... but I politely assured him this would be a one-time deal.) Such an ordeal for a plate. A plate! 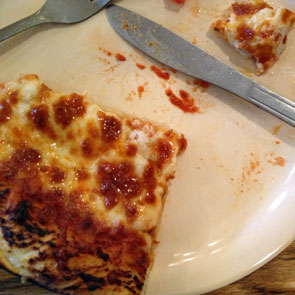 Remember the other day when I posted a photo of Brother Billy, Ginger and Meghan in Las Vegas? Well look who else is in Las Vegas, staying at the Luxor: 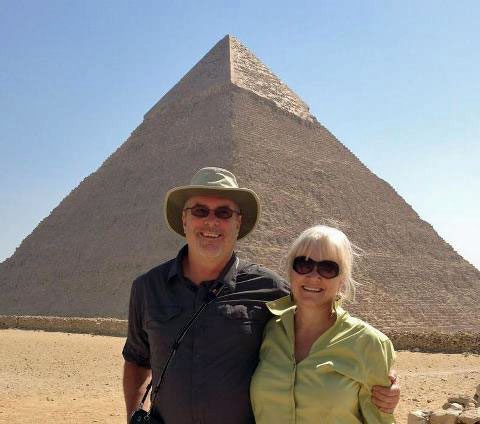 Oops. My bad. This is Indiana Jones Woody & Kathy at a pyramid - in Egypt! I swear, without facebook, I would have no idea where half my friends/family are at any given moment. Have fun, you two adventurers!

Until my next update, I remain, your fancy-schmantzy-plate-using correspondent.

There are (at least) three monoliths along the Oregon coast named "Haystack Rock". One is in Cannon Beach, one in Pacific City (Cape Kiwanda)
and another in Bandon.

How tall (in feet) is the Haystack Rock at Cape Kiwanda in Pacific City?

Email your answer to win@rvgoddess.com
before midnight (pacific) Wednesday, 18 July 2012.
One entry per person. The winner will be chosen at random from correct answers. The prize is an assortment of Oregon treats -
shipped to US postal addresses only. Good luck!

RV Park: Cape Kiwanda RV Resort. Very convenient location, but not the most modern facility. Many tree-lined sites as well, if this is an issue for your satellite dishes. Lots of live-ins. Across the street from the beach. Back-in grass sites and paved pull-throughs. Indoor pool/hot tub, laundry, store, bath house, fire pits, 30/50 amp full-service sites, free wifi. Walk to beach, shops and restaurants. We paid nearly $43 with our Good Sam discount.

« Outstanding Day at the Beach Up the Coast »