Merced, California:  One thing I have failed to mention is any thing at all about where we are staying - The Lakes RV & Golf Resort. The RV park is about twenty miles south of Merced in Chowchilla. (We usually stay at the RV park at Castle Air Base, which is ten miles north of Merced. Should someone maybe open a RV park in Merced?) The Lakes is a very nice park, with sites situated around a pretty pond. There is a golf course next door and campers have special rates, so people are zipping around in golf carts, going to and from the links.

One slight hiccup: there is no/little water currently at the campground. The city's largest well failed. Repairs are expected by the end of the month, but until then it is a gamble every time we open a faucet: a trickle, a little stream... or nothing at all. We keep our fresh water tank about half-full while traveling, so it is possible to rinse the shampoo from our hair - it would not be possible with the little trickle provided by the campground - by using our water pump. Still, for $50 a night, it would be nice to have water.

I had a very quiet day. DT was busy visiting his Mom (one-on-one Mother-and-son time) and conference calls in the afternoon. My allegedly retired husband finally went over to the golf course and hit a bucket of balls around five o'clock. Later, we relaxed outside with a cocktail, watched the Giants beat the Reds, and I experimented with our new oven.

If y'all will recall, we had a new oven installed on our way south last October, but it wasn't used much as I prefer to cook in the outdoor kitchen while in Indio. The oven is a GE Advantium Convection oven (PSA9120SFSS). It is an electric oven and a microwave oven combination and it would be perfect in every way, except for one major flaw - GE decided to add an "energy saving feature" that turns the clock off a few seconds after using the oven, so I only know what time it was while cooking. How much energy could the little blue clock light use? It super bugs me, because our old GE Advantium oven light remained illuminated 24/7/365. With this silly oven (no, there is no work-around), we had to buy a wall clock.

Where the old version only had a turntable and every dish needed to be able to go around and around on the turntable while baking (so rectangular baking dishes would fit), my new clock-free version has two racks. 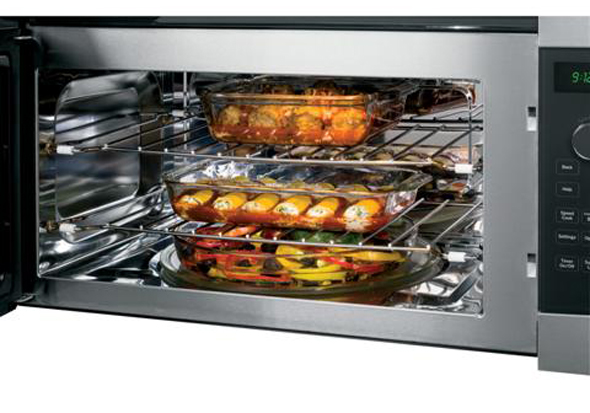 This stock photo above, from GE, show how someone might cook veggies, manicotti and meatballs (?) at the same time. I had noticed a recipe for One-Pan Salmon with Roasted Cabbage in Real Simple magazine and thought it would be interesting to try while using an oven rack for the first time. (Forget the sauce. The raisin and olive combo did not seem pleasing, so I made a sauce with shallots, Dijon and mayo.) I placed a rack on the lower level of the oven, used a half-sheet pan and cooked away - and actually followed the roasting directions. 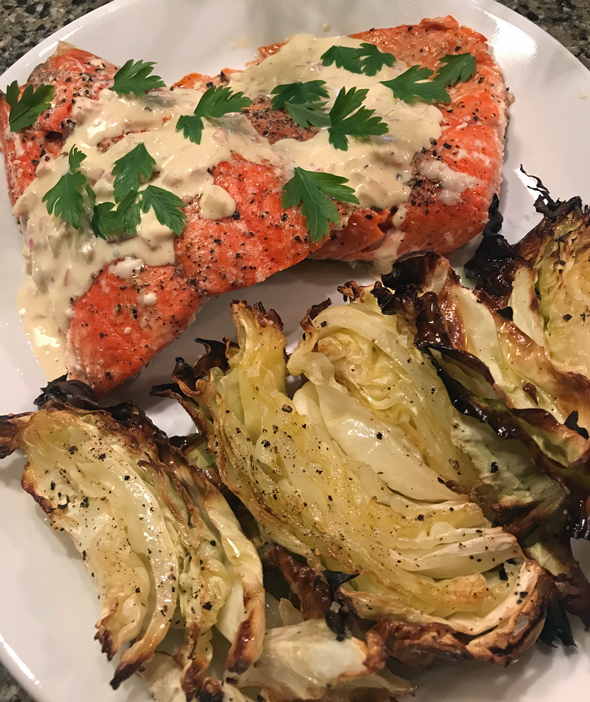 Yes. I cooked cabbage and fish in my motorhome. I know several people who have never used their RV oven. Never cook at all, ever, in their motorhome because they don't want to "stink up" the bus.

Not me. The cabbage and sockeye roasted away in stinky bliss. 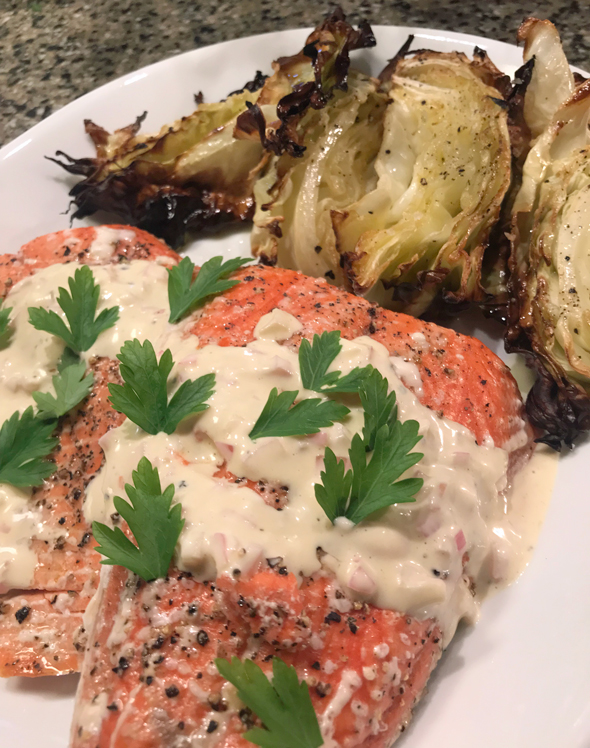 And it was delicious. And easy. And only used one pan. I can't wait to cook using the oven rack again.

The fish was served with an improvised salad. There was not enough water to wash lettuce, so I used the last two inches of an English cucumber, the remaining few tomatoes from our garden in Indio, a few leaves from our basil plant, and drizzled it with a bit of balsamic and olive oil. 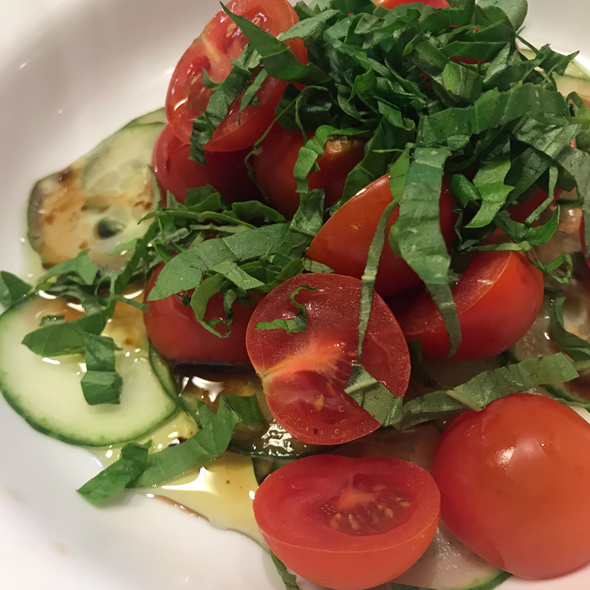 Our stinky RV will continue north in the morning.

Until my next update, I remain, your malodorously experimental correspondent.